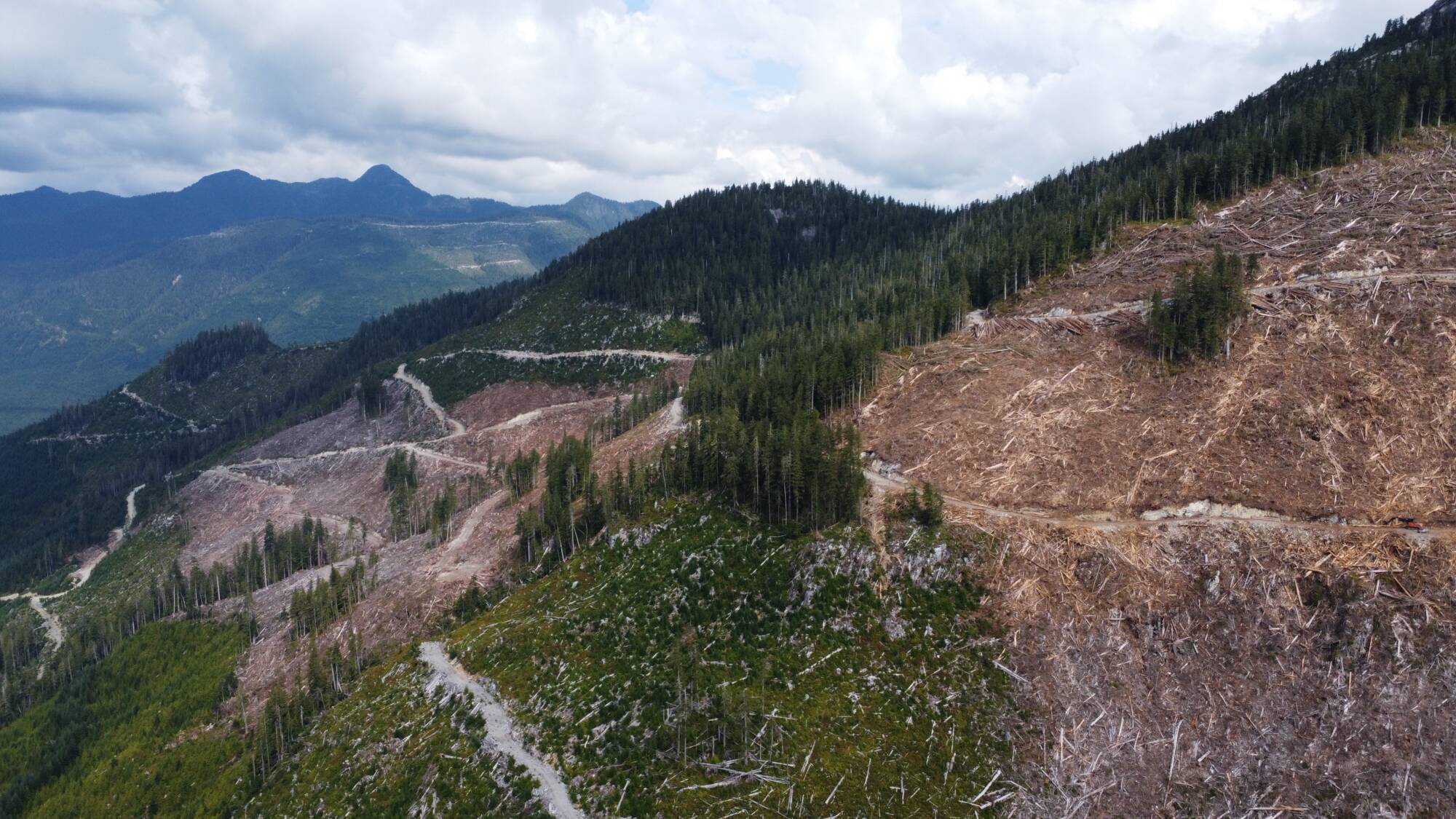 Last fall, the province announced its intention to halt logging in 2.6 million hectares of BC old-growth forests through temporary logging deferrals. But the Ministry of Forests has not made it clear since then which of these logging deferrals have been accepted by First Nations and are currently in place. A new report released on Tuesday by environmental non-profit Stand.earth shows that logging has continued in some of these proposed deferral areas.

They found that 1,600 hectares of forest within the four regions was logged between March 2021 and March 2022. Of this, nearly 700 hectares—about the equivalent of nine Beacon Hill Parks—were clear-cut after the deferral areas were announced last November.

On the northeast coast of Vancouver Island specifically, satellite imagery shows new forestry roads into proposed old-growth deferrals in 24 areas between May and June 2022.

That’s a concern to Angeline Robertson, a senior researcher at Stand.earth who helped author the new study.

“Old-growth logging deferrals are only meaningful when they stop planned logging,” she said in a press conference on Tuesday.

“The province consistently tries to look good by reporting deferrals in areas that aren’t actually at risk of being logged. And this is all just tall talk.”

Currently across the province, there are approximately 55,000 hectares of old-growth that falls within both proposed deferral areas and active and pending logging permits.

In a statement, Forestry Minister Katrine Conroy said that the report misses the “forest for the trees.”

“This report misleads the public by claiming that a ‘significant amount’ of old growth has been logged,” the statement reads.

“The Ministry of Forests has been monitoring the situation on-the-ground and—in fact—only around 0.3% of the proposed deferral areas have been harvested since November 2021 when engagements with First Nations started.”

After the November announcement, First Nations were given 30 days to respond to the government to indicate whether or not they support the deferrals within their territories, if they needed more time for engagement to make a decision, or wanted to discuss deferrals through existing treaties or agreements. Conroy said that multiple First Nations have indicated that they do not support deferrals proposed by the province. The Ucluelet First Nation was among those that opposed the deferrals, calling the 30-day deadline “unattainable” in a statement in November.

The forestry ministry also faced criticism from the Union of BC Indian Chiefs (UBCIC) for imposing such a short timeline for nations to make the decision on whether or not to agree to logging deferrals, after having taken 18 months itself to develop the approach.

According to the ministry, where First Nations have agreed to defer logging of at-risk old-growth, logging is not occurring, even where permits were already approved. The only exception is when on-the-ground assessments find that the areas do not meet the Technical Advisory Panel’s criteria for old growth: forests that are either 140 years or 250 years old, depending on the forest type.

Torrance Coste, national campaign director with the Wilderness Committee, says out of the proposed deferral areas announced last year, the province has not been transparent about which deferrals were approved by First Nations and which were not. This lack of information makes it difficult to monitor logging activity when it is unclear which of the deferrals are currently active.

“[The province is] saying they’re concerned about drawing criticism to the First Nations that have said no,” Coste said. “This is the problem with this inconsistent approach around deferrals and not just doing them, compensating [First Nations], and then creating the space for long-term land use planning to be done… where the nations themselves are deciding which areas should be logged and which ones should be protected.”

Coste points out that First Nations who were affected have been offered no compensation for lost revenues.

“To be effective, old-growth deferrals must be immediate, well-funded, and transparently communicated to Nations—essentially the opposite of what the BC government has done,” Khelsilem, chairperson for the Squamish Nation Council, said in a statement last November.

Elder Bill Jones of the Pacheedaht First Nation was dismayed when he heard of a new logging road being pushed through to the north eastern ridge of the Fairy Creek watershed. As one of the loudest voices against logging in the region north of Port Renfrew, the new development moved him to once again speak out.

“This was the forest of my youth, my Mother Earth, where I would go for my spiritual needs and for meditation,” he wrote in a letter last week. “This is a forest of ancient trees, the forest that nurtured me, fed me, and gave me a place to be.”

This is part of a recent road-building flurry across the province, especially near deferral areas, Coste says.

Forestry company Teal-Jones Group has held the permit to build this logging road for years, but was delayed over the past two by blockades. The road, once it’s complete, will run along the border of the deferral area mapped out by the province last June; however, according to publicly available data, it is currently a road leading to nothing. So far, the logging company has not made moves to apply for new cutblocks in the area—which is not uncommon. But the road signals intent.

In the Fairy Creek and Walbran watersheds, the two-year logging deferrals were a different scenario than those announced last November. For one, the deferrals, involving about 2,000 hectares of old-growth, were put in place at the request of the Huu-ay-aht, Ditidaht, and Pacheedaht First Nation, not imposed on them by the government.

The Pacheedaht First Nation is currently working on a land-use plan that will include Fairy Creek, and will decide whether to include or exclude logging in the watershed.

According to the Rainforest Flying Squad, for now Teal-Jones is likely planning three separate cutblocks—one of which runs right along the ridge above the watershed—just outside of the Fairy Creek deferral area. The activist group gathered this information based on flagging tape found in the forests as well as maps found in affidavits, internal Teal Jones maps, and public maps released by the company.

There are always impacts to forests adjacent to logging and road building, Coste says. The loss of trees fragments forests and makes adjacent forests more vulnerable to wind damage, while also changing erosion patterns. On a ridge, those impacts could be felt further.

Road building also comes with its perks for the logging companies. While it’s expensive and time consuming, companies keep and sell all the trees that they cut down in the process. Coste says he can’t count the number of times he has seen a planned road turn so it goes through the path of a giant, lucrative, tree.

“It’s not cheap to build roads, especially up onto the lip of a ridge of a watershed, like they’re doing there and elsewhere,” Coste said. “This requires cutting down massive trees, it requires blasting, getting people and equipment up to pretty remote locations. It’s an investment and they wouldn’t be doing it if they didn’t expect some return.”

There are currently no protesters out at Fairy Creek. The latest blockade near Lake Cowichan, was dismantled by police on June 29 at the request of the Ditidaht, Huu-ay-aht, and Pacheedaht First Nations. The protesters at the camp said they were unaffiliated with protest groups like Save Old Growth and the Rainforest Flying Squad.

The injunction obtained by Teal-Jones Group is in effect until Sept. 26.

Correction at 2:30pm on Sept. 2: A previous version of the story incorrectly stated that logging companies do not pay stumpage fees for sellable trees cut down while road building, and that they receive compensation for cutblocks within deferral areas. The story has also been edited to clarify the response needed from the province within the 30-day timeframe last November.