Screenshot from a video provided by the Rainforest Flying Squad.

Capital Daily is part of the Trust Project
latestCOVID
TransportationBusiness
HousingGood News
Screenshot from a video provided by the Rainforest Flying Squad. 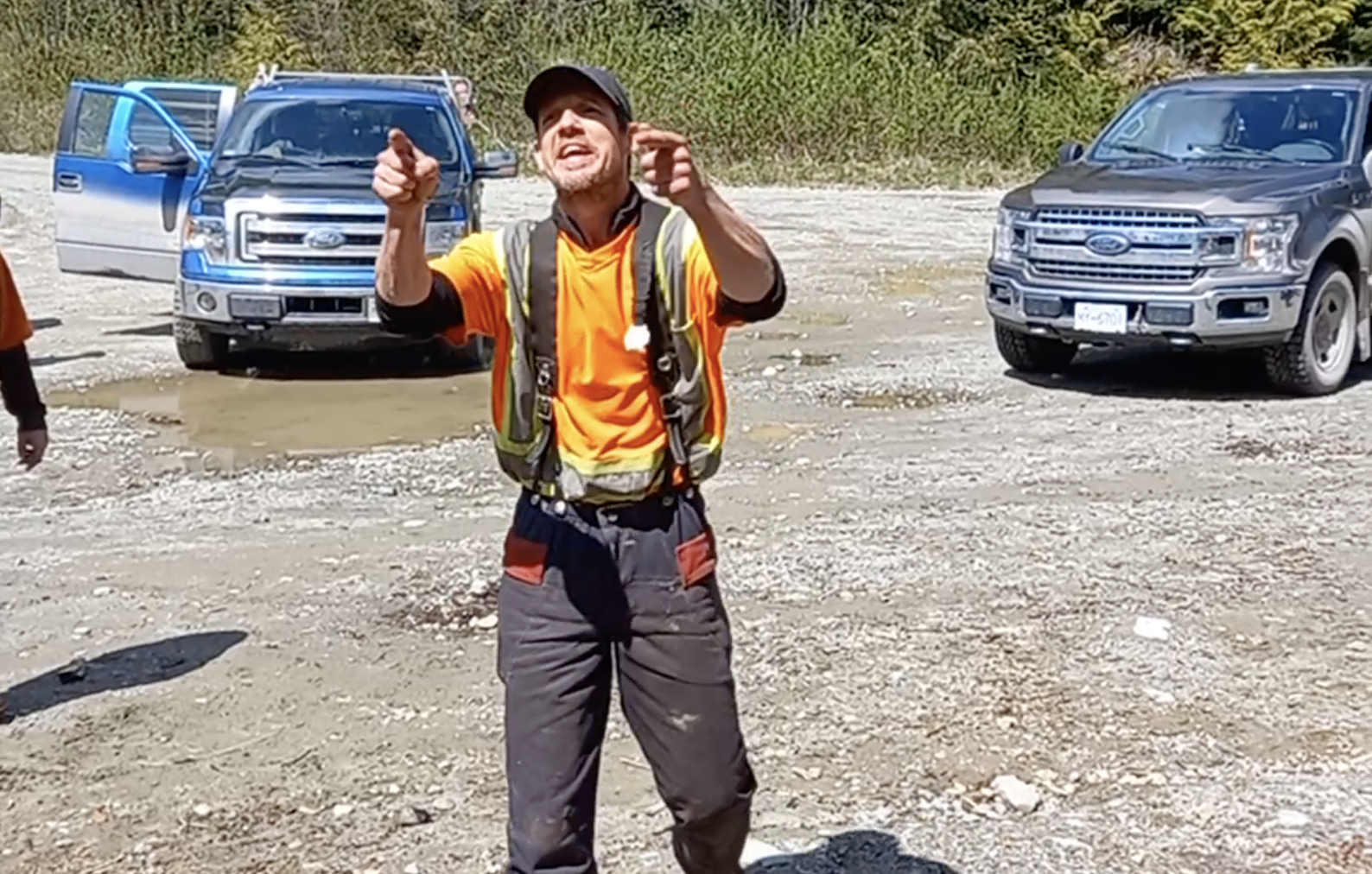 Screenshot from a video provided by the Rainforest Flying Squad.

The Fairy Creek blockades have reached a new and dangerous phase, with threats, violence and confrontations on the logging roads outside of Port Renfrew.

In a video shared by Rainforest Flying Squad members, a group of loggers confronts a group of blockaders, threatening them and at one point physically attacking one person.

The workers are seen shouting obscenities at the blockaders, and at one point a man runs toward the person filming the confrontation and knocks the phone from his hand. An ensuing struggle is heard but not caught on camera, and in the final frames of the video someone dressed in clothes matching those of the assailant is seen picking up the phone.

The Rainforest Flying Squad said in a press release that the group of loggers stole the phone. (It’s unclear how the video was later accessed and shared with media, though a spokesperson for the group suggested it may have uploaded to the cloud after being returned to cell service.)

“There is a sense that things are escalating,” says Erika Heyrman, speaking for the blockaders from near Port Renfrew. “Yesterday some people were just traveling on a logging road and they were not able to get by some workers who assumed they were part of the protests. The incident yesterday was targeted in the sense that the workers went out of their way to go to a location where they weren’t working to harass people.”

In its own statement on Wednesday, Western Forest Products said it was aware of the incident and had paused operations “while an investigation of the allegations takes place.”

The activists say it isn’t the first time things have gotten ugly at the blockades, with several confrontations taking place on the remote logging roads.

“Late Monday afternoon, a group of forestry workers made threats of impending violence to three people while holding tools—axes, tire irons and crow bars—in a menacing way, saying, “‘This is your only warning,’” the group said in a statement.

In the video, one person among the group of 10 loggers is heard saying, “If we see you fucks out there again, there’s going to be trouble to pay.”

No RCMP, no arrests, just a stack of papers, and on them a court date.

Things have become more complicated in legal terms as well for the blockaders. Five activists have been charged with violating an injunction (the Rainforest Flying Squad is appealing the injunction).

The company is seeking a $5,000 fine each and 21 days in jail for civil contempt of court, but the determination of any sentence will be up to a judge. A court hearing is set for May 7.

Will O’Connell, an activist involved in preventing logging in the Fairy Creek watershed and surrounding areas since last summer, was one of five named in the charge. O’Connell has been participating in the Caycuse blockade for weeks. Representatives from Teal-Jones had come to that specific blockade multiple times since April 8 and read out the injunction, while asking to pass through—each of those times workers were denied entry and eventually left the blockade.

On April 28, something changed. Representatives from Teal-Jones came to the blockade for the fourth or fifth time, and proceeded to read out the injunction and asked to pass through—which at that point had become commonplace.

O’Connell stepped forward and spoke to representatives from Teal-Jones on behalf of the other blockaders. Acting in a role he defined as an “industry liaison”, he says his job was representing the interests of the activists to Teal-Jones and industrial representatives. O’Connell himself was not planning on being arrested, and says he had no intention of standing in front of the RCMP.

At one point in the exchange O’Connell says he was asked directly by Teal-Jones representatives if they would be able to pass through the blockade and carry on their work. As industry representatives filmed him, O’Connell told them “No”, at which point an industry server walked back to the car, grabbed a stack of papers, and handed them to O’Connell. He was named directly and charged with violating the injunction.

No RCMP officers were present, and with no fanfare—he described the situation as “pretty uneventful”—the first charges in the Fairy Creek saga had been laid. When the industry representatives left the blockade, O’Connell was left wondering what the whole interaction had even meant.

O’Connell wasn’t the only one named in the charges; there are four others named as well.

The Rainforest Flying Squad offers a civil disobedience handbook, and states that violating an injunction is often penalized with community service. The actual sentencing and charges are ultimately up to the court and there may be differences in what sentences Teal-Jones has requested and what a judge ends up deciding.

The Rainforest Flying Squad has been silent so far on these charges. Perhaps unsurprisingly, with the ease of video evidence, the RCMP do not need to be present to witness injunction violations, which is not something many activists were prepared for. The risk of being charged without arrest is not presented within the Rainforest Flying Squads civil disobedience handbook.

The blockaders are well funded, with over $325,000 raised so far.  The activists have appealed the injunction and have recently named the province of BC as a third party in their ongoing court proceedings.

As for the confrontations, Heyrman says she's worried things will continue to escalate. The loggers involved in the confrontation are heard shouting that they have families to feed, while the blockaders remain steadfast in their defence of the forest.

"It’s very concerning," Heyrman says. "I don’t want to become alarmist and say it’s getting crazy out here but it’s a shame to see it becoming a fight between workers and people who are … helping to preserve the integrity of ancient forests. This should be an issue for government and industry to resolve."