What's happening to Vancouver Island's local food supply?
Does this look like Boston to you? Victoria has stood in for many places in its film history, but rarely plays itself. Photo: James MacDonald / Capital Daily
Business 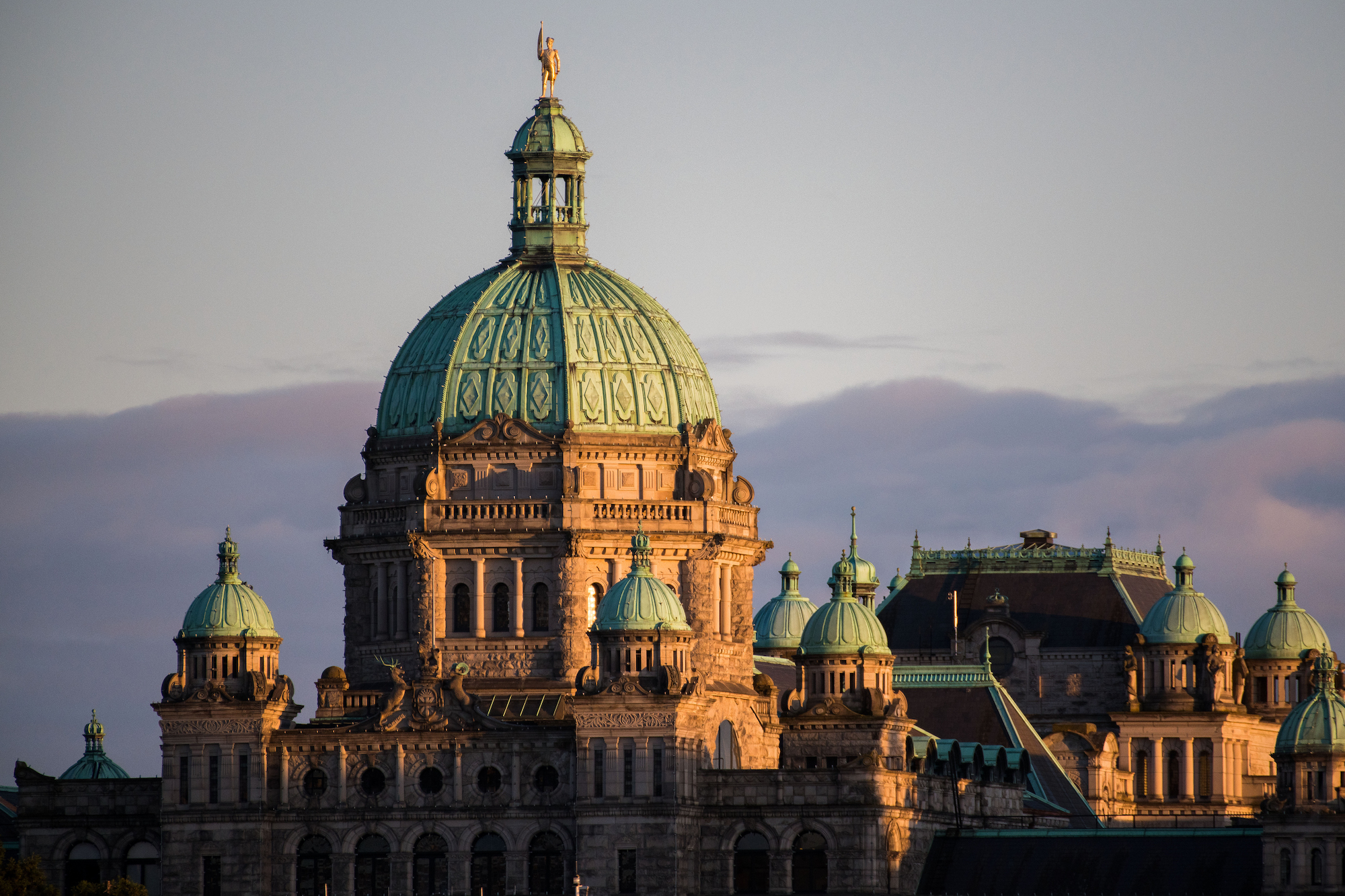 Does this look like Boston to you? Victoria has stood in for many places in its film history, but rarely plays itself. Photo: James MacDonald / Capital Daily

This week, the BC Parliament Buildings are standing in for a fictional university in Boston for a new production. Entitled American Dreamer, the film features Peter Dinklage and Danny Pudi—of Game of Thrones and Community fame, respectively—alongside Matt Dillon, Shirley MacLaine and Danny Glover.

Vancouver Island has become a hub for film and TV productions, for good reason. In just a few dozen square kilometres, productions have access to Victorian-era colonial mansions, rocky, Pacific beaches and bucolic, tree-studded suburban streets. Its desirability for big productions only grows when you consider how close it is to one of Canada’s largest film hubs, Vancouver.

But Vancouver Island has fallen into the same pattern many other Canadian cities have: over its long history of big-budget film production, the area never really gets the opportunity to play itself.

Victoria’s Hatley Castle has been the X-Mansion in the Deadpool movies and nearly all of the X-Men ones, the inner harbour recently played an unnamed city in Jordan Peele’s The Twilight Zone, and some railways outside the city were the victims of the titular creature in 2014’s Godzilla, set in California.

Before 2000, in such big movies as The Changeling, Five Easy Pieces and the 1994 version of Little Women, Victoria and the surrounding area played Seattle, the California and Oregon coasts, and Massachusetts.

While the stunning locales of Vancouver Island are a major draw for productions, a bigger draw—fitting with BC’s film history—is the access to major tax breaks.

Tax incentives have always been the driving force for film production in BC and Canada. And, for over 90 years, Victoria’s film industry has been based on saving people money.

Surprisingly, films have been shot on Vancouver Island since the 1930s, and these big productions almost always are the product of Canada’s ever-changing rules, quotas and tax laws.

Film production in Victoria began in earnest with something called the “quota quickies.” In an effort to bolster Britain’s weak film industry, British theatres were mandated to play a certain number of films produced by British subjects. And films produced in what was then the Dominion of Canada counted as British films. This created a rush of Hollywood filmmakers coming to western Canada, likely due to its relative closeness to California, to exploit the loophole.

Enter Kenneth J. Bishop. Not a lot is known about Bishop before his time in Victoria. It’s reported that he was born in the UK and worked in the American film business in Hollywood and New York City. In the early 1930s, Bishop came to Victoria and set up a film studio in Oak Bay where he began producing cheap “quota quickies” in Victoria for British audiences. The chance to weave through a loophole was always the express purpose of Bishop’s Willow Park studio; in a flyer for Bishop’s studio targeting American film distributors, it advertises that “you can comply with British Quota Law,” and that Victoria is only a short 10-hour plane ride from Hollywood.

Soon, Bishop and his studio were commissioned by the American film distributors, like Columbia Pictures, to produce movies that would count as British, and be screened in Britain, but which could profit American business.

The films that Bishop produced heavily featured the Victoria of nearly 90 years ago, with movies like What a Price Vengeance, Secrets of Chinatown (a.k.a. The Black Robe) and Convicted, starring a pre-fame Rita Hayworth.

While this loophole was eventually closed, Vancouver Island remained a semi-regular filming location for big film productions both from the USA and Canada.

This trend has continued into the 21st century and the biggest reason seems to be pure economics. British Columbia has become a hub for production because it has some of the most appealing production tax incentives in the world.

Filming in the Victoria area can mean a tax credit of up to 40%, which only grows if things like animation and special effects are also done in-province. Visual effects companies like Vancouver’s Imagine Engine, who have done post-production work on Deadpool and The Twilight Zone series, have benefitted from those tax breaks, and the tax credits are all contingent on hiring a certain number of local crews, actors and other film production workers. In American Dreamer, currently under production here, Ladysmith-born Michelle Mylett is a cast member.

“Why people choose to film in BC rather than say, Seattle, is [based on] a lot of reasons,” said Kathleen Gilbert, the Film Commissioner of the South Vancouver Island Film and Media Commission.

But Gilbert admits she’s noticed Victoria is much more likely to be portraying Seattle, for example, than itself. “I’ve been working in the industry for 30 years and other than our independent filmmakers, I’ve never had a big LA or Hollywood show come in and call it Victoria.”

Gilbert sees this as a product of how productions see their audiences. “It’s LA producers believing that the American audience, which is many times bigger than the Canadian audience, want to see movies made in America and portray their lives in their cities even if it wasn’t filmed in their city,” said Gilbert.

This is a common issue with productions in Canada. American or International film companies funnel millions and millions of dollars into making a film, even on a “small” film, and their bottom line is always on their mind. This means going with the sure-fire American setting, rather than a riskier Canadian one.

But here and there, Victoria has had the opportunity to play itself.

If you watched the Space channel in the early 2000s, you may have, at one time, stumbled upon something incredibly unique.

Handheld, early-digital video footage of Mount Douglas Secondary School, not obscured behind a fake name, and distinctly Victorian suburbs and grocery stores—Thrifty Foods to be exact—graced a nationally broadcasted television show. The BC Parliament Buildings show up undisguised in the background of conspiracy-laden conversations about CSIS on Victoria harbour ferries. Victoria is mentioned by name.

From 2003 to 2004, Victoria got the chance to show itself off in the Space Channel comedy-drama-sci-fi show Alienated. The show, set mostly inside a typical suburban home and surrounding areas, followed an average middle-class Victoria family as they are plagued by the unseen, often sexual, force of aliens.

“If it was a bigger city like Vancouver or Toronto I think it would have felt more generic. The fact that it was Victoria gave it more flavour and, in a way, authenticity,” said creator Mark Sawers. “If it had been set in Nanaimo that would have been too specific. So, in that way, Victoria was the perfect place.”

Sawers said Victoria wasn’t actually the intended setting. He wrote it with Vancouver in mind, but due to a deal that the network struck with the area, it ended up being set in Victoria. While this went against Sawers’s original idea, he’s quick to point out, “When a network likes your idea and wants to produce it, you don’t generally quibble with them.”

While Alienated ran for two seasons and featured the likes of George Takei, it is still a pretty obscure production. It does stand out for being set and filmed in Victoria,

something that we still do not often see—something the city’s current independent film scene is trying to combat.

Victoria, for a city its size, has a surprisingly robust indie film community that is focused on, and interested in, telling Victoria-centric stories.

The indie film community in Victoria is mostly centred around CineVic, the artist-run society for independent filmmakers in Victoria.

“We’re catering to people who don’t have the huge budgets,” said David Geiss, a filmmaker himself and the executive director of CineVic. (Of course, in the filmmaking world, anything with a budget of less than a million dollars is considered “low-budget.”)

But the indie community is not trying to fight the big productions that come to town. The two worlds have a symbiotic relationship.“A lot of our members make their own films, but then some of them are also working paid gigs on some of these big films—almost to finance their own independent filmmaking,” Geiss said.

In this indie world, films set in Victoria are the norm, as much out of convenience as anything. As Kathleen Gilbert puts it: “It’s easier to film a movie in that town and say it’s that town.”

With Victoria’s history of being other towns, David Geiss says there’s a certain backlash against hiding the filming location. “[Filmmakers are] saying ‘no, we are going to make films here; by people who are from here, who live here and it’s set here and we’re going to do it.’ And they’re doing it!” said Geiss.

Arnold Lim, a veteran filmmaker, photographer and video journalist, has recently completed his first feature-length film set on Vancouver Island, All-in Madonna. The film is based on a 2018 short film he made and is currently on the international film festival circuit.

“There’s a lot of range here. The tone of the West Coast—it’s something that’s really, really special and not showcased as Victoria very often,” said Lim. “This is why I wanted to showcase Vancouver Island as Vancouver Island in my films.”

However, films are made for an audience. And getting an audience for a movie with no big names attached, even with the novelty of its setting, can be a struggle. But Lim believes for us to see more stories based where we live, from the perspective of a local, we need to live the ethos of ‘supporting locally.’

Lim points to the importance of art and storytelling, and issues a challenge to Canadian moviegoers.

“If you take the chance, that’s where you find the gold,” said Lim. “You can’t find the treasure without really digging for it.”