June 16, 2021
Get the news and events in Victoria, in your inbox every morning.
Thank you! Your submission has been received!
Oops! Something went wrong while submitting the form. 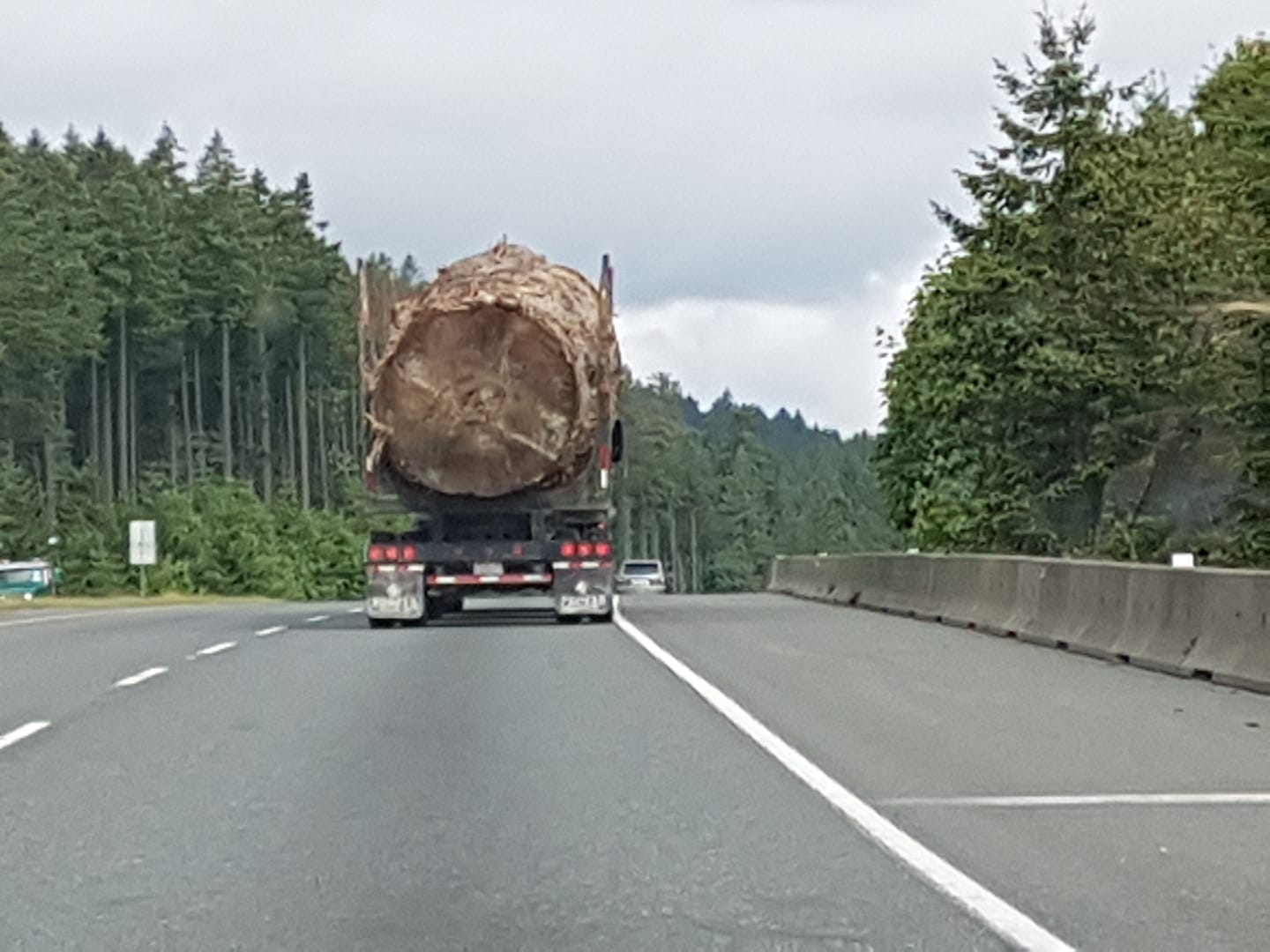 Lorna Beecroft was driving down the highway in Nanaimo in late May when she was struck by the sight of a giant yellow cedar log being hauled by a truck in front of her.

She quickly snapped two photos of the tree to share online once she got home, not realizing that the images would become symbolic of the fight to preserve old-growth forests on Vancouver Island, nor that they could one day be sold on the internet to raise money for blockaders at the Fairy Creek watershed.

“Honestly, I only put it up on Facebook, because this means a lot to me, and to see that truck rolling down the road with that log on it was just so jarring,” Beecroft told Capital Daily. “It was shocking to see how far it went so quickly, and I had no idea that anything would ever come about, let alone being able to have it possibly raise money.”

Enter Chris Jensen: an islander with a passion for preserving natural habitats and a keen interest in the world of cryptocurrency.

Jensen had been following the movement to protect old-growth forests in the Fairy Creek watershed from being cut down by forestry company Teal-Jones. After reaching out to his local MLAs and finding the result fruitless, he decided to take matters into his own hands.

He came across Beecroft’s photos on Facebook, and after assessing the viral nature of the post, reached out to her to see if she would be interested in having the images converted into Non-Fungible Tokens or NFTs.

NFTs use blockchain technology to verify the authenticity of a digital product—anything from a photo to a song to even a tweet—and are sold through platforms like Opensea to people who wish to purchase an original digital item. The idea and the technology behind it has been criticized for being a ‘fad’ and for having a negative environmental impact.

But for Jensen, NFTs represent a potential new avenue for fundraising and creating awareness for social and environmental causes, like the Fairy Creek movement.

“These are the first NFTs I've ever minted, so I had to do a bit of research to make sure that things went well… there was definitely a bit of a learning curve on that,” Jensen said. “I saw that… as an opportunity [to use] it as a modern way of doing fundraising.”

Old-growth logging in the immediate Fairy Creek watershed and the Central Walbran Valley has been deferred for two years, after the province agreed to honour a deferral notice issued by the Huu-ay-aht, Ditidaht, and Pacheedaht First Nations on June 5.

This agreement does not, however, cover much of the intact forests in the area. Roadbuilding and old-growth logging in the connected forests outside of the two deferral areas is still allowed to continue, which is why protesters remain on site.

“I haven't heard back from the Rainforest Flying Squad… They publicly encourage people to take their own initiative, and so that's kind of what we’re doing,” Jensen said.

Kathy Code, a spokesperson for the organization told Capital Daily she was not aware of Jensen’s plan but was happy to hear about it.

“We can use all the donations that we get,” Code said, adding that one of the biggest upcoming costs for the Rainforest Flying Squad will be to cover protesters’ legal fees and costs of recovering vehicles and possessions that were removed by the RCMP during arrests. “We certainly expect to pay for all that.”

As for the Ancient Forest Alliance, Jensen says a spokesperson for the group expressed their interest in the idea of using NFT sales to raise funds, but added that it will take time for them to look into the process themselves.

“The awareness and money spent on NFTs is really taking off and we’re intrigued to see how non-profits and the causes they work on can benefit,” a representative of the Ancient Forest Alliance told Capital Daily. “We will be watching that space closely to see how BC’s ancient forest movement can capitalize on the opportunity.”

The Ancient Forest Alliance is not misguided in their cautious approach to this new technology.

Various articles have been written about the major ecological cost of mining cryptocurrencies like Bitcoin and Ethereum using current methods. NFTs—more recent products that are bought and sold using these cryptocurrencies—are also attracting attention for the amount of energy they consume during creation, sale, and resale.

About three months ago, business news publication Quartz created an infographic that breaks down the carbon footprint of selling a physical piece of artwork on the internet—listing it online, packaging, and transporting the product to the customer each step of the way—and that of an average NFT sale.

They found that shipping a piece of artwork to an online customer causes 2.3 kg of CO2 emissions. Meanwhile, over its lifecycle, an average NFT will create a footprint of 211 kg of CO2. To compare, driving a gasoline-powered car in the US for 160 km causes 41 kg of emissions.

In addition to the environmental costs, experts say that NFTs are a passing trend that have no real value, because the original version of a digital product is no different than a copy.

“It is a bit of a stretch from an economist’s point of view to look at an NFT as something of value, because you have created this artificial scarcity that has no real value or intrinsic value. Any copy is not any different than the original,” said Dr. Werner Antweiler, a professor of economics at UBC, who specializes in environmental and energy economics.

Antweiler does not agree with the idea that donating proceeds from the sale of NFTs offsets the emissions that arise from their creation in the first place, and calls it an “exercise in greenwashing.”

“It's like any donation that goes to a good cause. I could earn money by selling fossil fuels and then if I donate the money to a good charitable environmental cause, does that offset what I’m doing in the first place? No,” he said. “Basically, this is window dressing. You still have emissions on the first activity.”

At a personal level, Jensen says his activities are carbon offset by an initiative he has been undertaking for the past two years: planting Moringa trees in Burkina Faso.

Jensen and Beecroft say they understand the environmental issues associated with creating and selling NFTs, but consider them less urgent than the immediate risk of old-growth deforestation.

“I understand that it's definitely an issue… but for me, it's a little bit of carbon right now versus chopping down an entire ecosystem,” Jensen said.

“I think it's still worth the trade off,” Beecroft concurred.

The pair have not yet received any bids on the viral photos Jensen converted into NFTs, but they have until July 3 to find a buyer.

Update on June 22 at 1:20 pm: This article was edited from a previous version that incorrectly stated that Jensen and Beecroft intended to donate funds from the NFT sales to Ancient Forest Alliance.