August 5, 2022
Get the news and events in Victoria, in your inbox every morning.
Thank you! Your submission has been received!
Oops! Something went wrong while submitting the form. 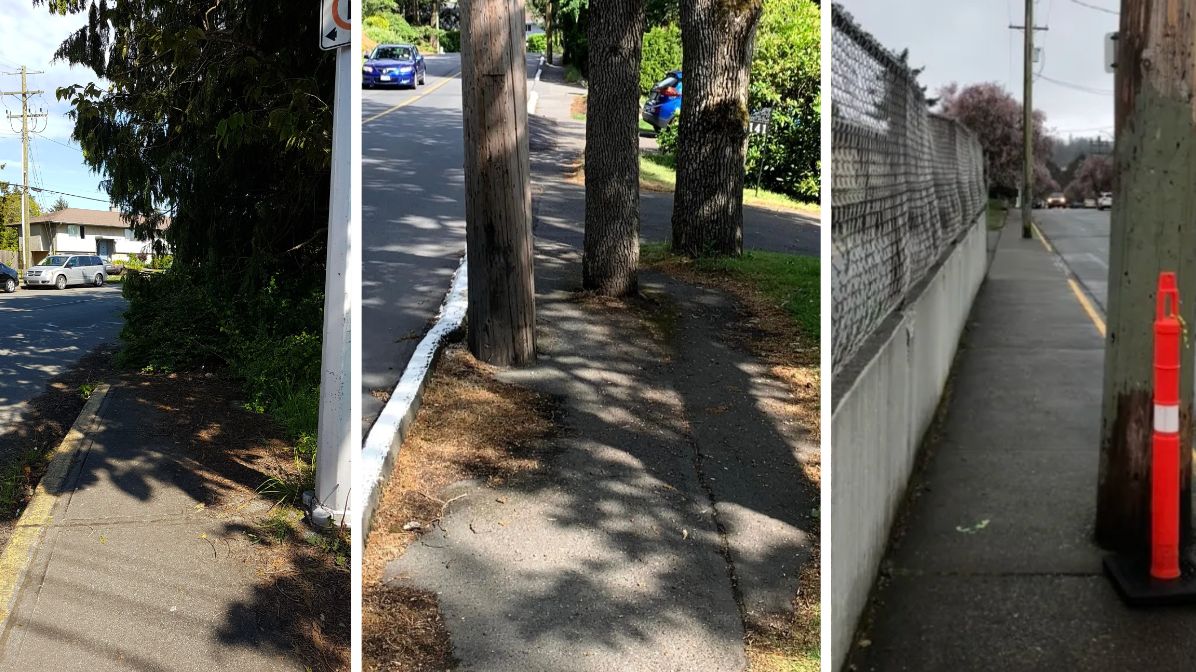 Elise Cote doesn’t walk around her Tillicum-Gorge neighbourhood anymore. She would like to—if it weren’t for the lack of sidewalks, and the cars she all-too-often sees speeding around the corner.

Since moving to the neighbourhood in early 2017, she says she’s witnessed multiple near misses between passing cars and her children, aged 8 and 3, including one that came within a foot of them. Last summer, a car crashed into her neighbour’s house across Tillicum. A friend had to perform CPR on a driver after a crash that same year.

“We have this constant, looming fear of just trying to walk around our neighborhood, which could and should be highly walkable,” she told Capital Daily.

Her eldest child’s elementary school is nearby. There are parks, playgrounds, trails, grocery stores, and a library all within walking distance. But there are few sidewalks to get there.

Instead, Cote says, she and her partner feel resigned to drive distances that are so short, they’re “ridiculous.” Her partner will drive their kids three blocks to the playground instead of taking the street.

She’s been advocating with Better Mobility Saanich for improved sidewalk infrastructure for the last five years. It’s a focus she shares with pedestrian advocacy group Walk On, Victoria—and one the group is hoping to bring into the spotlight by pointing out the worst sidewalks (or lack of sidewalks) around the region.

Sally Reid was thinking of bus stops when she came up with the concept for #JankyJune: a photo contest that would encourage people to submit the “worst of the worst” pedestrian infrastructure they saw in Greater Victoria.

She took inspiration from Streetsblog USA’s Sorry Bus Stops campaign, which identified a stop located directly on the Lougheed Highway in Pitt Meadows as the overwhelming winner—or loser—of the sorriest bus stop in North America.

“It was sort of a fun way to highlight a serious problem and got a lot of people participating,” Reid, the founder and steering committee member of Walk On, Victoria, told Capital Daily.

She saw the same potential in shedding light on Greater Victoria’s patchwork of pedestrian-puzzling streets, sidewalks to nowhere, and shrubs, dumpsters, and hydro poles that, at their most minor scale, inconvenience walkers—and prove far more hostile to those with mobility issues.

It’s the same reason she founded the group in the first place: she found herself frustrated again and again as she tried to navigate through her neighbourhood by crossing streets without crosswalks, walking along the shoulder of busy roads, “or there'd be bushes in my way, that I'd have to sort of squeeze my way through,” she says.

“We’re really hoping that first of all, people start to notice that the built environment for pedestrians is often a lot worse than the infrastructure that is built for drivers,” she says. “Drivers take it for granted that they're never going to have to squeeze their car through a bush.”

The worst sidewalks identified in the Walk On, Victoria survey are spread between the region’s largest municipalities: Victoria, Saanich, and Langford. Each has three finalists among the worst identified by the pedestrian advocacy group’s contest. Oak Bay and Esquimalt aren’t much further behind, with two.

There were two categories of winners: “jankiest” (or least functional) sidewalk and “most shameful lack of sidewalk.” Both are found in Saanich, on Cedar Hill Road and Cedar Hill Cross Road.

Capital Daily reached out to Mayor Fred Haynes’s office for comment, but could not arrange an interview before publication.

The District of Saanich is aware of its lack of finished sidewalks, and says it builds about 5 km of sidewalk per year—far from the 200 km of sidewalk it would need if it were to cover all its collector roads and arterials. At the current rate, that would take about 40 years, not counting the need to replace existing ones.

The debate over sidewalk-less streets

Rumon Carter lives on Island Road, one of the oldest neighbourhoods in Oak Bay. “There's no sidewalk,” he said. “And so the character, in a sense, is defined by that.”

The fact it has no sidewalk is actually no problem to Carter.

“People are paying attention and get out of the way when there's a car coming,” he said. “But because people, and their dogs, are walking on the street, there's an obvious traffic calming effect.”

In fact, Carter said when Island Road was repaved, his neighbour was upset that drivers would go faster. “Whereas, when it was cracked and broken, it slowed cars down,” he said.

Carter admits this isn’t the case for every street—Island Road is not a major throughway like Richardson or Madison streets. But with an older demographic in need of better transportation and a thorough bike lane network, he believes the district should shift its transportation priorities to be more pedestrian focused.

“Raised sidewalks separate cars from pedestrians—which is great from a safety perspective,” Carter said. “But it also speaks to the primacy we give cars ... Our street [Island Road] is not focused on cars, and we’ve never felt so close to our community.”

Seven kilometres away from Carter, Cote argues the very opposite. She hasn’t stopped and spoken to neighbours, even though she’d love to.

“We talk a lot about road safety,” she says. “But what we don't talk about is the quality of life issue… and the [missed] community connections when I can't walk down my street feeling at ease.”

She points to Ker Avenue, where a grassy park separates the cul-de-sac from Tillicum, as a golden example of what Saanich and other municipalities could do by eliminating collector roads or converting them into dead-end streets. Every evening, Cote says, “you see a pack of kids riding their scooters around” and playing. Blocks away, her kids haven’t met their neighbours because there’s nowhere safe on the road to play.

For Reid, the goal of the #JankyJune contest is to get people thinking about infrastructure in a different light—and contacting their municipal councillors about sidewalks in need of attention.

“We hope that they'll vote for candidates in the next election who think that active transportation and walking is important and deserves more funding.”