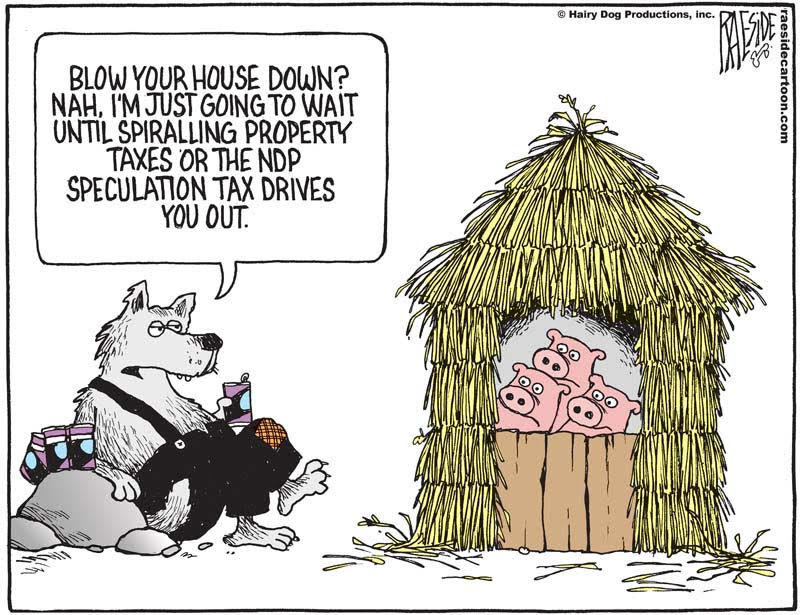 (Copy by The Capital Staff )

For 36 years, Adrian Raeside was the cartoonist-in-residence for the Times Colonist. He’s savaged 10 B.C. premiers, lambasted B.C. Ferries, poked relentless fun at Victoria’s myriad petty squabbles and is known to take equal hits at polluters and environmentalists alike. His syndicated strip, The Other Coast, runs in more than 200 newspapers. And now, he’ll occasionally be submitting cartoons to The Capital.

In all likelihood, the three pigs depicted here would have had their building permit denied the moment Victoria officials glimpsed their plans for a thatched roof.

Nevertheless, Greater Victoria and B.C. has indeed been witnessing a recent rush of homeowners being sent packing by a tax of some kind.

The speculation tax has resulted in a number of very vocal exits from the Victoria vacation home sector. In one widely circulated Times Colonist op-ed, U.S. citizen John Dudycha said he was ditching his Victoria condo after 14 years when his taxes jumped from $3,000 to $15,000. “We used our fully furnished condo several times each year, so it was certainly not ‘empty’ or ‘vacant,’” he wrote.

However, the tax has indeed seemed to accomplish its goal of warning off alleged foreign speculators. As previously covered by The Capital, foreign buyers accounted for 4.2% of all purchases in Victoria before the tax. After the tax was introduced to Victoria in May, 2018, that was down to only 0.9%.

At the same time, Greater Victoria property taxes continue to bound upwards at rates well beyond inflation. The most recent City of Victoria budget hiked property taxes by 4.3%. Saanich upped them by 5.37%. Both tax hikes, in turn, were prompted in part by another tax: The B.C. Employer Health Tax, which added millions to municipal costs across the province. The CRD is similarly upping taxes due to the new wastewater treatment plant, with rates rising as much as 15% in some cases.

And businesses are feeling the crunch harder than anyone. According to the Greater Victoria Chamber of Commerce, in 2018 Victoria businesses paid a tax rate that was 3.5 times the rate charged to residents – a notable increase from only two years before when the multiple had been 3.2.

All in all, it does indeed seem to be a very good time to be a wolf at the door.

The Capital Daily newsletter is a summary of all the news and events happening in Victoria, in your inbox every morning.
Subscribe Today
Related Coverage
No items found.
Have a tip?
Use our confidential inbox