May 7, 2021
Get the news and events in Victoria, in your inbox every morning.
Thank you! Your submission has been received!
Oops! Something went wrong while submitting the form. 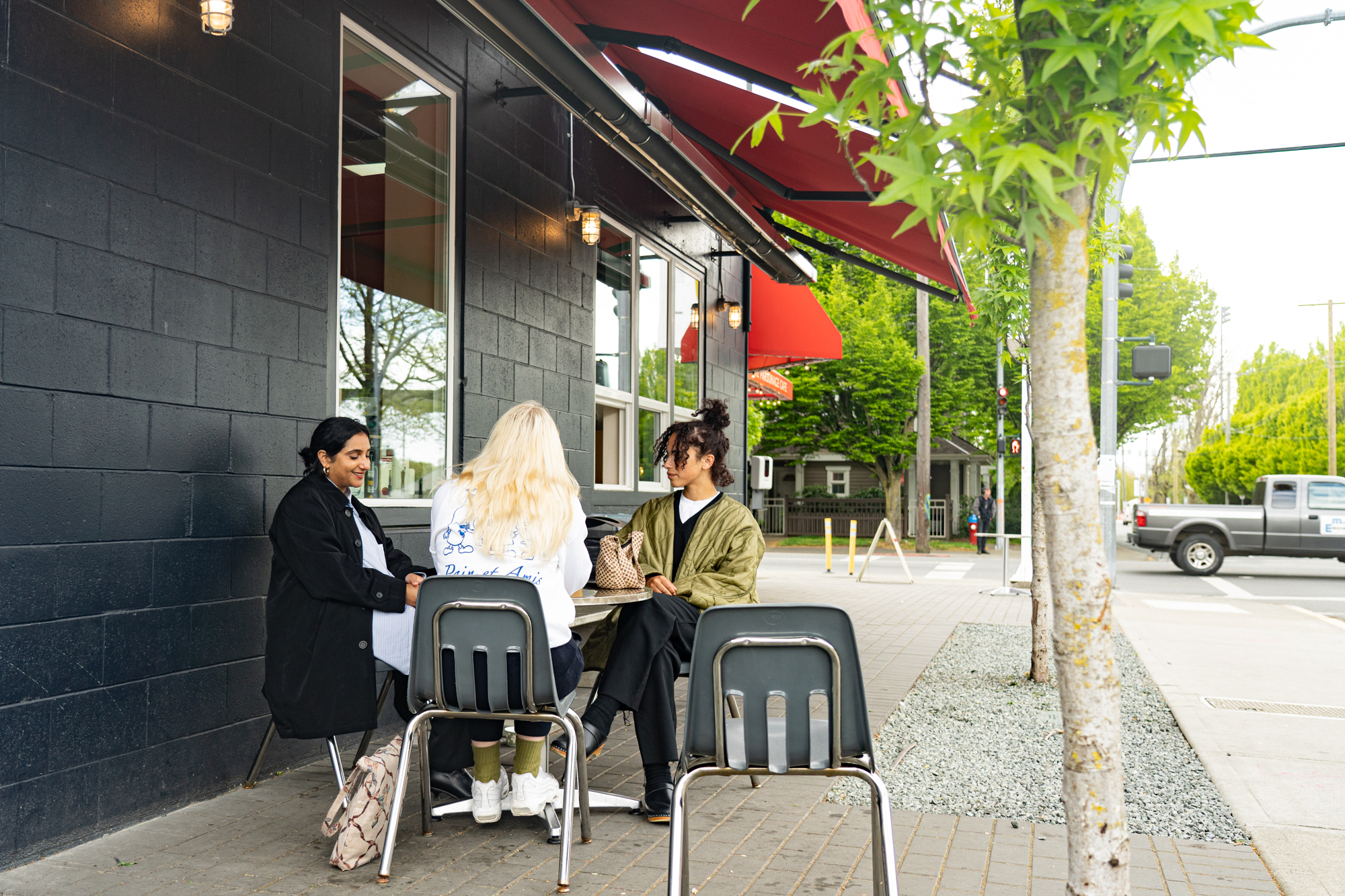 It’s 12:36 on a Monday afternoon, and Ben Cram needs to reschedule our phone call.

The co-owner of Fernwood Coffee Company doesn't have a Zoom business call or sales meeting—it’s a co-worker’s birthday, and he’s organized a lunch for their big day.

When Cram picks up his cellphone again, though, he’s all business: ready to talk about Fernwood Coffee and The Parsonage Cafe’s critical acclaim, which, in many ways, is due to the same attitude that prompted him to delay our call. Located steps from Royal Athletic park, the business has received awards, including recognition as the “Best Workplace” in 2019 from the Victoria Chamber of Commerce, and praise for their ability to successfully take over a cafe and start a roastery from scratch.

Long before owning the cafe, however, Cram and his wife, Terra Ogawa, were regular customers of Parsonage. Both had experience in the restaurant industry, with Cram working as an executive chef and Ogawa in front-of-house and management roles, when they were approached one morning by the then-owner.

Eating breakfast with their son in a high chair, they were informed by the owner that she was retiring from the cafe, which had been in the neighbourhood for over 30 years.

“We’re going to list the business,” the owner said that morning. “Thought you’d make us an offer? It would be a great place for you to run.”

Sure, they were sick of working long nights at restaurants while looking after their newborn child, but at first Cram and Ogawa didn’t take the proposition seriously. However, the thought of running a local cafe with a coffee roaster inside made the couple think more about the idea.

“It planted the seed, and we were like ‘maybe we could do this,’” Cram said.

Cram and Ogawa purchased The Parsonage Cafe in 2007, and as if that were not enough, began plans to launch a coffee-making company too.

“The initial roaster was literally in the cafe—it was an 800 square foot cafe, where we ran a cafe in the day time and roasted and bagged coffee at night,” he said.

Even when their ambitions started to raise eyebrows around some within the niche coffee community in Victoria, Cram and Ogawa weren’t deterred. They were going to see their vision through.

“I won’t say who, but I had a few people in the coffee industry with more experience than me who were like, ‘you’re crazy to try and run a coffee roastery in this cafe,” Cram said.

Growing up in Manitoba, Cram’s first job was as a dishwasher in a Greek restaurant. At the age of 13, he instantly fell in love with the camaraderie between restaurant staff, and decided he wanted to spend the rest of his life working in the kitchen.

In 1999, he moved to Victoria with a culinary arts degree from Red River College in Winnipeg.

Before the conversation that led him and his wife to purchase The Parsonage Cafe, Cram spent seven years as executive chef of Pescatores (now called 10 Acres). He says that experience in upscale dining helped him both grow Parsonage and Fernwood, and distinguish themselves from other coffee businesses in the city.

“From day one, it was always obvious that there’s no lack of quality coffee in Victoria,” Cram said.

“So, to us, it was quickly catching up on that quality of coffee—which is just a matter of research and diligence—then what we brought, what I think a lot of our competitors didn’t have, was that fine dining background. It was not unheard of in high-end cafes in Victoria back then that [their] coffee was great and the service was snobby.”

Specifically, Cram says that Fernwood is always willing to teach people the skills of the trade, but if you don’t know how to be a decent human being, that’s more than what they can take on.

That pledge was solidified early on in his tenure, when he observed the snarky coffee culture perception getting the better of a local.

An older lady walked into his cafe in tears after she was made fun of at another coffee shop for her order of french roast coffee beans. After eye rolls and laughs, the coffee baristas declared, “We don’t do french roast.”

She left without responding to the chuckles or asking what was wrong with the order, and arrived at Parsonage so distraught that Cram decided to personally take her aside to try a variety of coffee beans.

“There’s this snobby idea of dark-roasted coffee not being good, and we broke it down, let her try different coffees, and by the end she felt super comfortable,” he said. “But [more importantly she had] that release of being able to come in and not feel ridiculed because she wasn’t asking the ‘cool questions.’”

Since taking over Parsonage in 2007, Cram and Ogawa have purchased a more modern roaster to replace the old one in the building, and developed the wholesale coffee business—in addition to running food and drinks out of Parsonage cafe—that now accounts for roughly 60 to 70% of their revenue.

Initially, however, it was a struggle to build up that side of their coffee company.

While striving to take a hands-on approach to source their beans, Cram says Fernwood wanted their wholesale coffee products to grow organically (so to speak).

For the last four years, they have had a direct trade relationship with a coffee farm in Brazil. Every year since the relationship began, aside from 2020’s pandemic disruption, Fernwood’s head roaster would travel south to try out the coffee beans.

While the farm in Brazil is one of their biggest sources of coffee, Cram says Fernwood also has ties with a variety of other import/export companies, and samples hundreds of different coffee beans before producing them to sell.

At the end of the day, their goal was to sell the best grocery-store coffee on Vancouver Island, while breaking the perception that grocery shelf coffee is weaker than that sold in cafes.

Sales were also bolstered two years ago when a salesperson joined their team. Today, at grocery stores like Thrifty Foods and through their website, you can purchase a variety of coffee products, merchandise, and brew guides.

No matter how big Fernwood Coffee grows, there is always a point of pride to remain loyal to locals. The Parsonage Cafe has grown into a hub for neighbours to gather together, and staff to enjoy one another's company.

Cram always wants to go above and beyond for customers and staff. That dream is portrayed nowhere better than pushing back an interview request in favour of a staff birthday lunch on a dreary Monday afternoon in May.

“Every single person who works for us gets a birthday present on their birthday,” he said. “Whether they’re a dishwasher who’s worked with us for a month, or someone who’s been around for 10 years. We want to be like family.”

Ben Cram: Less red tape from the city in particular. That being said, a few years ago, they introduced the City Business Ambassador who is a bridge between the city staff, city council, and the  businesses. That has helped a lot.

The health and wellbeing of our staff.

The prospect of it being a family business. Our son is getting to the age where he’s going to be working for us soon in a more official capacity. I mean he always has since he was little, but he’s going to be taking on a real role in the business soon. That is exciting.

Definitely Sean Hoyne, he’s been a real big help to us, and also Paul Hadfield of Spinnakers is a mentor as well.

If you had to run another business in town, what would it be and why?‍

One of our upper management guys is really getting into ‘bean to bar’ chocolates, a term for true chocolatiers (making chocolate from scratch). That’s something that would intrigue me as well.

I think it’s grown into such a thing for having all these managers who are invested, we have a second cafe that one of our key managers is a partner on, I think that’s a key part of it for us right now: watching the staff’s jobs turn into careers.

A long, long time ago I tried to put a walk-up ice cream window in, and that failed miserably. We just kind of deleted it from the plan, and kept doing what we do.

What do you wish you knew before starting Fernwood Coffee Company?

I wish I would have known how wise it is to own your own property instead of leasing it.