December 27, 2022
Get the news and events in Victoria, in your inbox every morning.
Thank you! Your submission has been received!
Oops! Something went wrong while submitting the form. 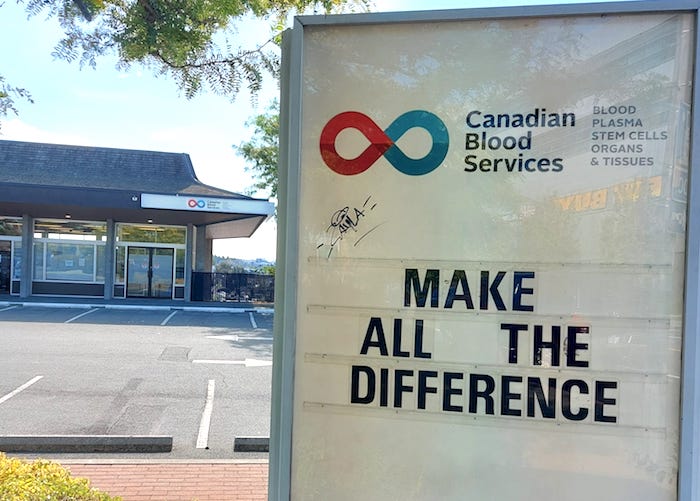 The snowstorms that rocked Western Canada last week had a chilling effect on blood supply.

In Victoria alone, Canadian Blood Services has about 170 donation appointments to fill for the rest of December, and another 1,290 to fill in January, an indication that fewer people have been able and willing to donate this winter.

Blood donated on Vancouver Island is transported by ferry to the Lower Mainland, said Gayle Voyer, the associate director of donor relations for BC and the Yukon. It’s then processed in Vancouver–and sorted into blood and blood products like plasma or platelets—before samples are sent to Calgary for testing. Finally the blood is distributed, by need, to hospitals around BC.

It’s a system that works, unless transportation goes down. Over the last week, BC Ferries sailings were patchy, at best. Voyer doesn’t know exactly how much blood is on hand at hospitals across Vancouver Island, but said supplies provincewide are low—just three to four days of supply—and the Island is included in that. Canadian Blood Services tries to have a five- to eight-day blood supply on hand.

“When we do have weather impacts like road conditions or ferry cancellations, that can impact the ability to move blood…not just on the Island but also around the country,” Voyer said. “However we do have constant communication with the hospitals.”

Blood is usable for just 42 days after its donated, she added.

“That's why we have a constant need for blood and blood donors.”

The organization made a call for donors on Tuesday, noting that heavy snowfall, extreme cold, and icy conditions meant many collections and donor appointments were cancelled, leading to a shortfall of about 1,500 blood donations across Canada.

Overall, the country’s blood inventory is down 35% since the start of October.

“The current week that we're in and moving into, and January are typically the toughest weeks for us to collect blood and blood products,'' Voyer said. “And then we've also had a drop in donor attendance, believed to be the result of increased respiratory illness, COVID, cold, and flu—because most donors cannot donate when they are not well.

“For any donors that can get to a donor centre safely, we're just asking them to book an appointment either today, or in the near future to help restore and grow the blood and plasma supply for patients.”

The donations are free to make, she added, but require a time commitment. Donors can go online, sign up, and book appointments ahead of time, at the donation centre closest to them.

“It’s about an hour to save a life,” Voyer said. “And that's a pretty great thing to do. It doesn't cost you anything.”

Canadian Blood Services may loosen rules on gay men. Where does that leave transgender donors?