March 30, 2022
Get the news and events in Victoria, in your inbox every morning.
Thank you! Your submission has been received!
Oops! Something went wrong while submitting the form. 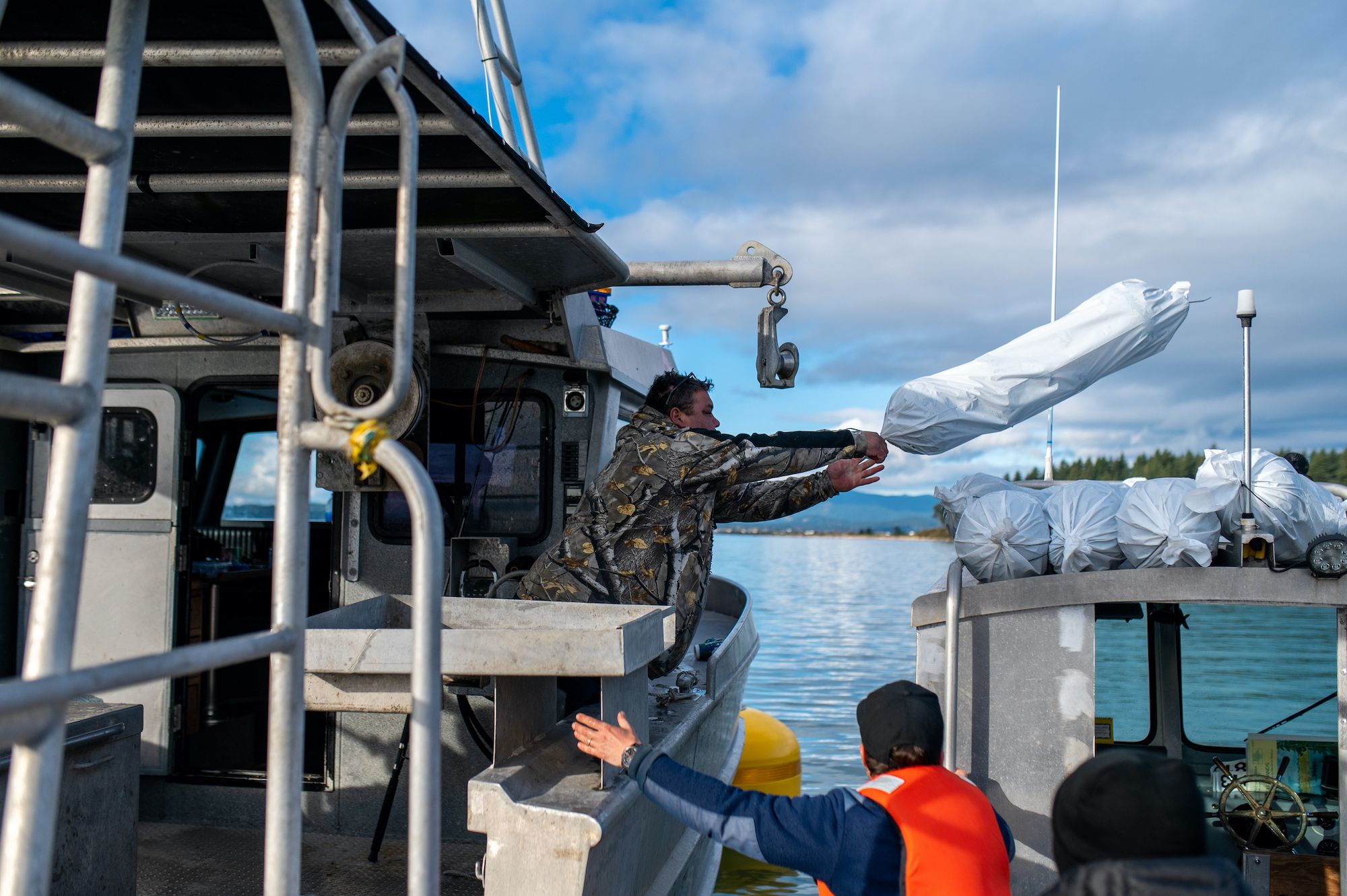 Beneath the calm waters of Cordova Channel lies a growing industry—one that bears largely untested promise and potential for economic returns and environmental benefits. In June 2021, Cascadia Seaweed entered into a partnership with the Tsawout to operate a commercial seaweed operation in the waters between Saanichton and James Island.

Cascadia, which already operates a farm in Danvers Inlet off the west coast of Vancouver Island, told Capital Daily they hope that their collaboration with Tsawout is the start of a new commercial model that provides restorative benefits to the environment.

Seaweed is a major part of coastal ecosystems: it stores carbon, provides a valuable food source, and serves as a critical habitat for fish and other ocean animals. It is highly valued by Coast Salish peoples, who use it as a disinfectant, nutrient-rich snack, laxative, and agricultural resource.

“There are so many teachings and traditional knowledge about seaweed that have been passed down, from generation to generation, by families who have harvested and relied on seaweed,” said Tsawout councillor Allan Claxton.

But it’s also increasingly valued by customers around the world. The market for seaweeds of all kinds is now worth $15 billion worldwide.

So far the James Island farm has a 20 kilometre-long line of seeds, which may make it the largest ocean-based seaweed farm in Canada, according to Cascadia. The eventual goal is to provide consumer goods such as seaweed snacks through Cascadia’s own ocean food brand called KOVE.

However, the underwater fields of seaweed have thinned in recent decades. Harvesting, overfishing, and climate change have all contributed to the decline, according to a 2016 study by The National Academy of Sciences. As kelp dies it sinks to the ocean floor bringing with it all the carbon it sequestered over its lifespan. This makes it an important aspect of the ocean’s ability to take in carbon dioxide.

“I have been on the water for over 50 years and have noticed a considerable decline in kelp and seaweeds as well as fish of all species,” says Jesse Thompson of the Snuneymuxw First Nation

Besides the commercial nature of the project—which Cascadia’s CEO Mike Williamson says has grown to be one of the largest seaweed producers in Canada—the agreement with the Tsawout also entails planting extra seaweed beyond that which will be harvested, in order to help the marine ecosystem return to normal conditions.

To do this, Cascadia is distributing palm-sized “pucks” of kelp seedlings around the areas where they operate, which grow to become kelp forests. The company has already seen positive impacts at their farm in Danvers Inlet; Thompson says over the last three years he’s seen a return of fish, gulls, and black bears to the inlet.

Williamson says all their kelp—which may be exported as far as China to be used for food and medicine—is sourced locally.

“James Island is a good example. In that area, there's sugar kelp. there's giant kelp, there's bull kelp,” said Williamson. “So we are planting two of the species that occur there naturally anyway.”

While Cascadia touts the potential benefits of its project, some experts say that more research is needed before kelp farming can be ramped up to a mass commercial scale—and that even then, as with monocultures on land, any form of agriculture implemented on an industrial scale poses risks to the environment.

A 2017 study by Norway’s Møreforsking Institute found large-scale operations had the potential to drive out native species and reduce the nutrient base of the ecosystem, causing disruptions to the local environment. It concluded that more research is needed to find solutions to these potential issues. Until that time, experts are calling for the industry to work within its means.

Biologist and activist Alexandra Morton has spent her life trying to defend BC’s coast from the risks posed by another industry that was at one time promoted as a solution to the depletion of a wild population: salmon farming

“'I’ve spent the last 30 years dealing with industrial aquaculture, where the whole problem is the scale of it,” Morton said. “Had it remained small and in discrete locations and had paid attention to certain natural laws, I don't think there would have been a problem.”

Morton says she is seeing the same worrying trend with BC’s budding seaweed industry that she saw with its salmon industry, namely industrial farming that poses a risk to integrated micro habitats. While she sees room for artisanal harvesting and small farms, Morton remains wary of anything larger than that.

“When you start doing something on a large scale, and using seaweeds from other parts of the coast, you unravel thousands of years of evolution,” she said.  “To look at this fragile and frankly, heavily damaged series of ecosystems along our coast, to look at that and think, ‘oh, let's do large monoculture,’ alarm bells go off.”

Some First Nations are looking at a different approach—one they hope can provide economic benefit while also preserving the surrounding ecosystem.

Frank Voelker, the band manager and economic development officer for the Kwiakah First Nation on the North Island, has spent several years working with researchers at North Island College and companies like Cascadia to research sustainable aquaculture.

Voelker says the goal is to create an industry standard that can be used by all seaweed farmers as they begin commercial production. He says that this will focus on developing co-ops and small farms that can work together to produce seaweed while keeping each individual farm small and environmentally sustainable.

“From a research perspective, we want to perfect how you can grow in our area,” he said. “We also want to figure out, what is the carbon sequestration potential of seaweed when you do it as farming? There are quite a [few] open questions.”

The Kwiakah have also bought a former fish farm which they hope to turn into a small-scale kelp farm over the next few years. For the First Nation, the difficulty is in the lack of accessible processing plants. The nearest processing plant is on Quadra Island, over 70km away, too far for it to make economic sense to ship heavy, bulky, wet seaweed from the farm. Voelker says the current plan is to build a pre-processing plant that would reduce the water content of the kelp by 60% before shipping.

While Voelker is excited about the potential for this new industry, he remains skeptical about the long-term economic feasibility of kelp farming and its potential for job creation.

“How many people do you need to watch kelp grow? Because the moment you plant the seed, there's nothing to do besides monitoring until you harvest six months later.”

Voelker also stressed that any agreements between First Nations and industry should be under complete control of the nations themselves and that industry should not have a say in the development of best practices. He said companies can provide feedback on whether the practices are working but can’t decide for themselves what they are.

“[Companies] are the ones who will be tested, they have to comply with that standard, and we have to work together here with the Indigenous regional governments, environmental NGOs, and to a certain degree, also the provincial government.”

For all the uncertainty, the Tsawout are happy with the agreement with Cascadia and believe the company has the right approach to sustainability and environmental restoration. They also see the agreement as a tangible representation of their treaty rights, which will provide environmentally-friendly jobs for the nation.

“As First Nations stewards, we need to pass on the rich ecological knowledge of our ancestors to ensure that economic activities taking place in our marine environment are safe and sustainable,” said Tsawout Fisheries Manager Chrissy Chen.

Under the 2007 Tsawout First Nation Land Code, the nation is guaranteed land use and resource rights over their reserve as well as the surrounding land and water, which includes Cordova Channel and Saanichton Bay. The code is an updated form of the 1850 Douglas Treaties which deprived Indigenous nations of their land throughout southern Vancouver Island in exchange for traditional hunting and fishing rights.

The agreement with Cascadia Seaweed is the first commercial licence handed out by the nation on their traditional lands. Tsawout elder Mavis Underwood spoke to the hopes of the nation for the project.

“It is a challenge to speak for future generations, but in the beginning it was hoped that a partnership with Cascadia would begin to inspire hope and reconnection with the richness of the saltwater marine territory that maintained Tsawout First Nation, the STAUTW community, for generations,” she said.

Correction on March 30, 2022 at 1:45 pm: A previous version of this article stated the Danvers Inlet farm is in Pender Harbour rather than in Barkley Sound, and that Cascadia had planted 20 square km of kelp—rather than 20km of production line. Also, due to a transcription error the name of a kelp species, sugar kelp, appeared as "sugar cow," which is not in fact a species of kelp. 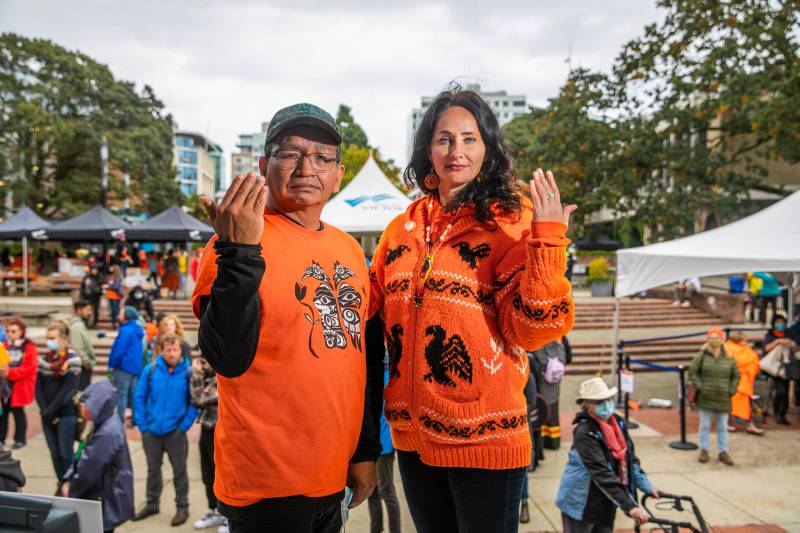 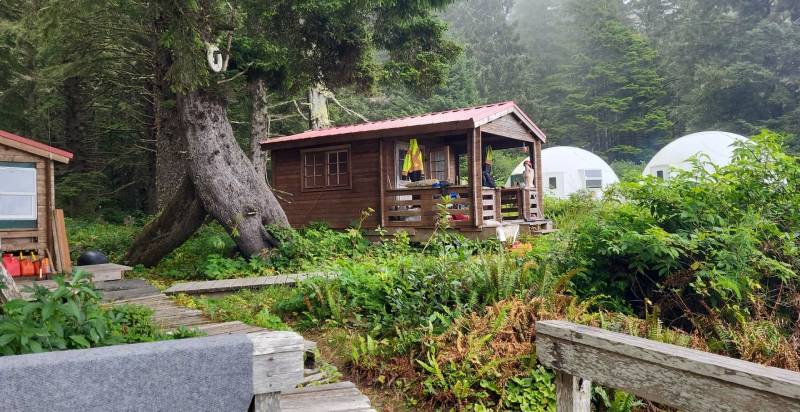 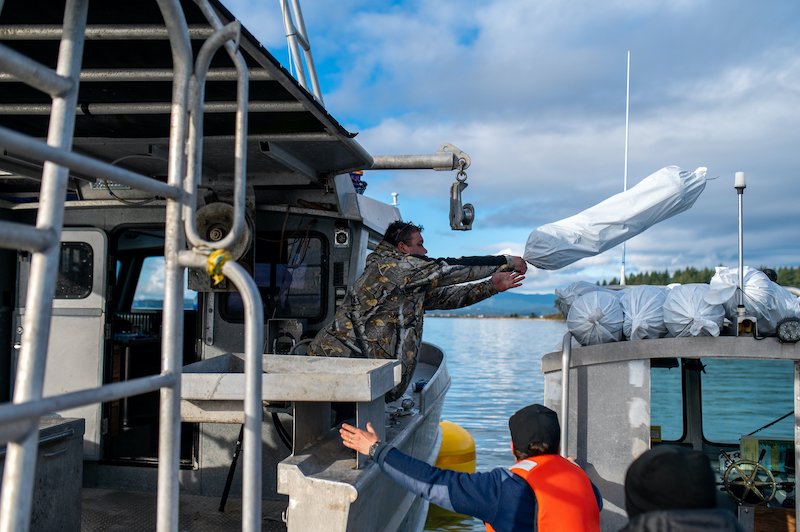