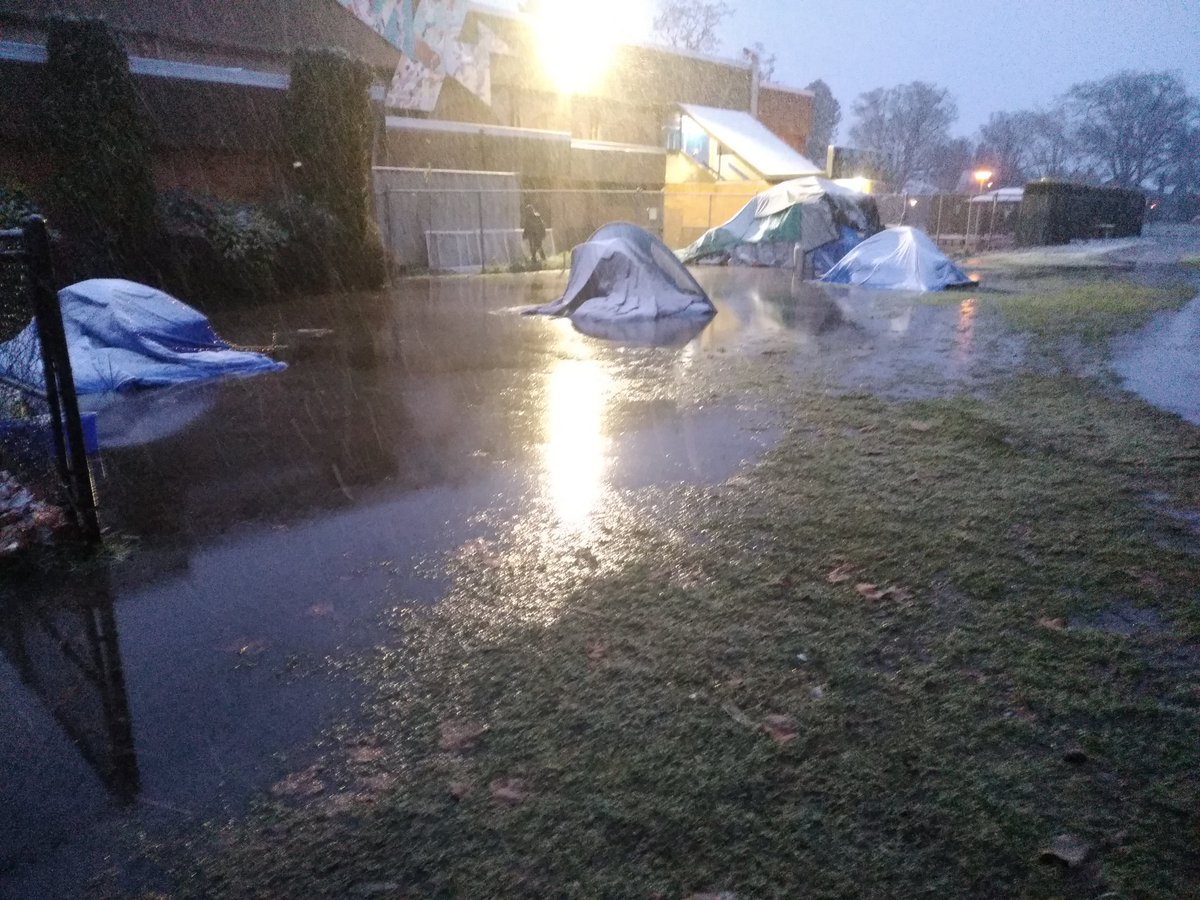 On Tuesday morning, Tina Dawson woke up in a wet, muddy tent after an unexpected bout of snowfall the previous day.

“The only thing keeping me warm [was] not my sleeping bag, [but] my body,” Dawson said in an interview with Capital Daily.

For the past six months, Dawson has been living in a tent at Central Park after she was evicted from her apartment. Now even that temporary shelter has been destroyed.

“Everything is wet. There were people with a foot of water going over...their tent floor,” she said, nearly in tears.

Despite forecasts to the contrary, Victoria was doused in wet snowfall following heavy rain on Monday, leading to accumulations of 5cm the next day. By Tuesday morning the ground in city parks had turned into a combination of slush and mud, leaving many people’s belongings caked in a layer of ice.

Victoria residents were offered an early glimpse of what this unexpected inclement weather did to the encampment at Central Park thanks to a series of tweets shared by the North Park Neighbourhood Association on Monday night.

In response to the weather and deteriorating conditions at the park, the Neighbourhood Association penned an open letter to BC Housing and various politicians urging them to reopen the Save-On Foods Memorial Arena (SOFMA) to house unsheltered people during the winter.

This is a surprise to no one. We ask again — please help our neighbours who are living in Central Park. This cannot wait any longer. @BC_Housing, @jjhorgan @GraceALore @MurrayRankinNDP @crd_bc pic.twitter.com/6M7NKnNy1d

“This urgent request to provide indoor shelter in the SOFMA is in response to both the rapidly deteriorating conditions in Central Park, and the proven success of sheltering in this space,” the letter reads.

On Tuesday afternoon, BC Housing provided a response to these requests in an emailed statement to Capital Daily.

A representative for the organization says they have been in talks with GSL Group, the company that operates the arena, to reuse the space as a housing facility, but nothing concrete has been decided yet.

In the meantime, as an immediate measure, BC Housing and the City of Victoria have made the joint decision to move everyone (around 45 to 50 people) sheltering at Central Park to the parking lot at adjacent Royal Athletic Park.

The rationale for this move is that the parking lot is paved and can provide higher, drier ground during the cold, wet winter season.

“The Victoria Fire Department has stock of replacement tents and cots which they have graciously offered for the campers. BC Housing will fund additional tents and bedding if there is a shortage of supply,” the statement reads.

BC Housing says members of the Greater Victoria Coalition to End Homelessness have been informing campers of the decision today, and for some the move is already underway. Most will be moved tomorrow at 1pm.

“As the cold and wet weather continues to make sheltering in parks more challenging, the City is actively working with its partners to secure more safe spaces for people to stay warm and dry, by March 31 at the latest,” said Mayor Lisa Helps in a statement.

“In the meantime, we are grateful to everyone who has mobilized to help move people camping to firmer ground that won’t flood.”

Moving to a paved space may keep mud out of tents, but will do nothing to fend off the damp that clings to campers’ clothes and tents in the aftermath of a storm.

“This morning, I got up and all my clothes were wet. These are the only dry clothes that I have,” said Darrin Murphy, pointing to the clothes he was wearing when he woke up in his tent at Central Park this morning.

“My tent is half wet, half my [mattress] is wet because the zipper is busted and water comes in.”

The City says it is providing fresh bedding and a new tent to those being relocated.

Murphy also lost his home after his landlord evicted him once BC lifted the eviction ban that had been enacted in the early days of the pandemic. Now, he calls Central Park home, but would much rather be inside.

Hundreds of unsheltered people in Victoria were moved into shelter spaces over the course of 2020 after being displaced when shelters had to shut down or reduce their capacity.

The number of available shelter spaces in Victoria (including the hotels) has increased to 641 this year, compared to 472 in 2019, according to BC Housing statistics.

Even accounting for that, experts say there are over 200 people who remain unsheltered in the city, with no concrete plans for immediate shelters even as the weather is expected to get worse.

Last week, Capital Daily reported that groups are working on plans to build tiny homes and Conestoga Huts to house unsheltered people during the winter.

However with no timeline for construction and no details on where these shelters will be placed, it appears that those living in encampments are left to fend for themselves.

“Now they're making all these long term goals,” said Dawson. “In the short term, I'm going to be a frozen corpse.”