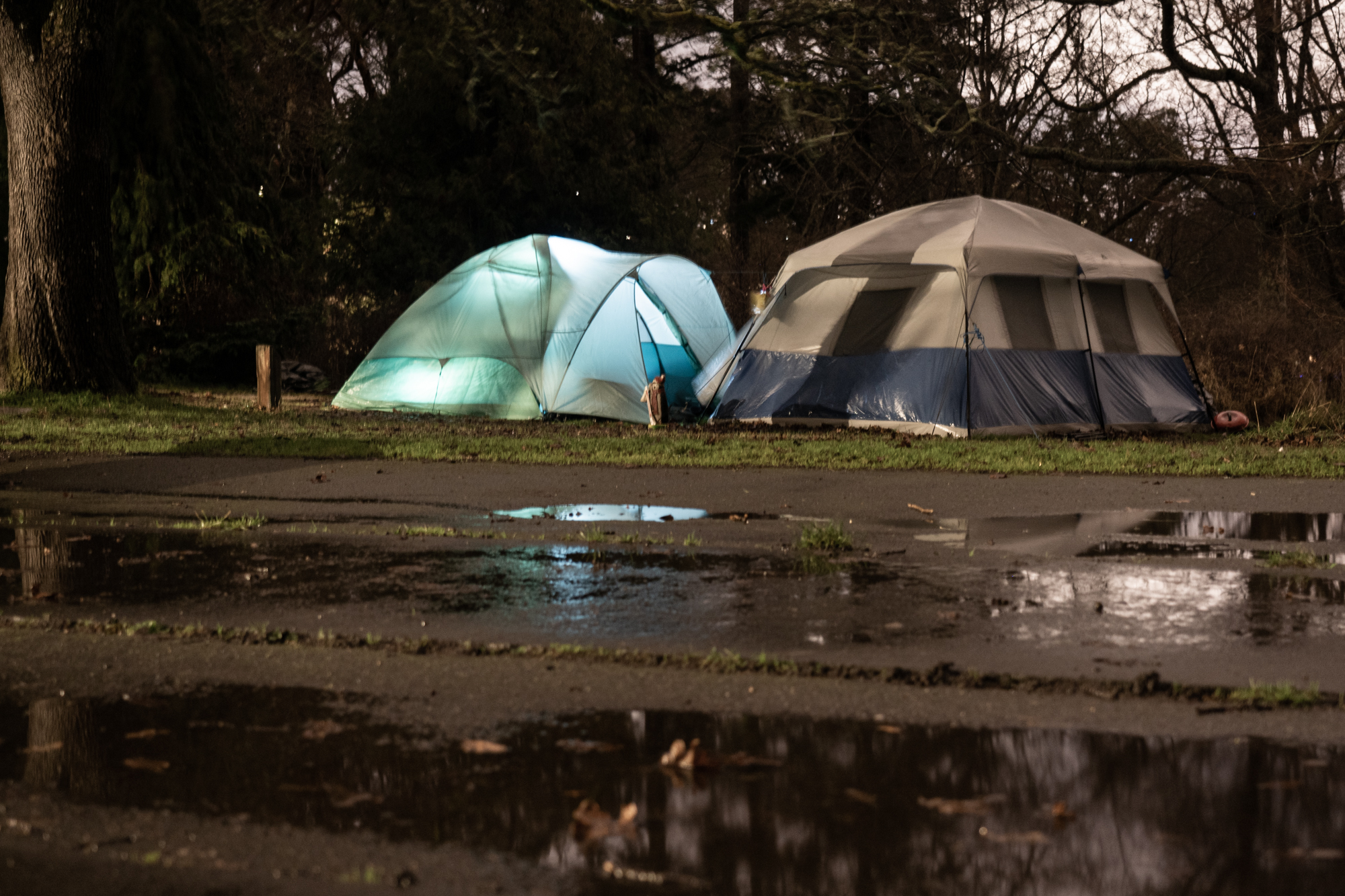 As most of Victoria shelters in the warmth of their homes, the cold winter rain has started to seep into the clothes and makeshift tent homes of the city’s unhoused population, creating a permanent, insidious damp.

“When it’s windy and rainy...it gets all the moisture in, and everything just gets wet. Then it gets cold and there’s no way to dry your clothes,” said Sean B., a resident at the Beacon Hill Park encampment.

The persistent dampness is a health risk for people who are already more vulnerable to illness, said Shae Perkins, a former resident at the encampment who is now housed and acts as an advocate for the community.

“Everything stays wet, and it causes a lot of health problems like hypothermia and pneumonia,” he said.

In prior years, Victoria’s unhoused population had regular access to shelters, most of which are now operating at reduced or half capacity to allow for physical distancing during the COVID-19 pandemic.

Unhoused people have been displaced for that reason and due to a loss of income during the pandemic, and now face a winter living in the outdoors with few supports.

Daniel, another Beacon Hill Park resident who lost his Langford home a month ago after no longer being able to afford rent, says he still counts himself among the more fortunate.

“I feel lucky because I’ve got good [camping] gear on me, but I worry for the older people and people who have physical problems,” he said, glancing over at an older camper who sits bandaging his injured hand.

Before the pandemic, unhoused people in Victoria who did not have access to a regular shelter could at least count on a mat to sleep on indoors whenever the weather got really bad.

The Greater Victoria Extreme Weather Protocol would open up dozens of extra shelter spaces at sites across the city, squeezing in extra mats and beds during stormy or snowy nights.

This year, the extreme weather program has been put on hold due to COVID-19 restrictions, but some shelters still offer a reduced number of seasonal beds.

Leah Young, the Director of Housing and Shelters at Our Place Society says this year, the organization is working with the Cool Aid Society to offer 20 seasonal shelter mats that run from November 1 to March 31, 2021 and are available for people to sleep on between 7 pm to 7 am.

“For the past two weeks, it has been at full capacity, and that goes along with the weather,” Young said in an interview with Capital Daily. “When the weather starts to get rainy and windy, then we see higher demand.”

Already, people have had to be turned away nightly from the seasonal shelter, and Young says their waitlist of people looking to find warmth grows up to 20 names long every night. She expects that list to grow longer as the weather grows colder.

“Once the weather gets really bad, I can’t expect those tents to withstand the wind and rain, and if there’s snow it’s not going to be very pleasant,” she said.

Environment Canada meteorologist Doug Lundquist says Victoria is in for a warmer-than-average winter season overall, but that cold spells are still on the horizon.

“It looks like the end of winter is going to be colder than the start, [with] colder-than-average weather for January and February,” said Lundquist.

“Even with a warmer-than-average winter, we can have periods that are very cold… and there can be extreme situations.”

The region has already been the subject of multiple wind warnings and rainfall advisories from Environment Canada this winter. During those periods, unhoused people at Beacon Hill Park have been turned away when trying to find an overnight shelter space due to a lack of capacity.

“I’ve never been able to get in at the Our Place Society shelter,” said Matt Burrows, an older resident who lives at the encampment. “I’ve got spinal injuries and I need to have warmth, a shower.”

Since the start of the pandemic, the provincial government and BC Housing have collaborated to find temporary shelter spaces for hundreds of unhoused people in Victoria by buying and leasing hotels and creating supportive housing spaces.

The number of available shelter spaces in Victoria (including the hotels) has increased to 641 this year, compared to 472 in 2019, according to BC Housing statistics.

Even after all that, Young estimates there are over 200 people who remain unsheltered in the city.

Victoria city councillor Charlayne Thornton-Joe says she is aware of plans for modular housing and locations for other shelter spaces being considered for the winter.

“We know because of COVID, people are losing their jobs, losing their homes and we definitely have new people that are becoming unhoused,” Thornton-Joe said in an interview with Capital Daily.

She said there were meetings in the fall to discuss how to house homeless people during the pandemic winter, but with COVID-19 case numbers still low at that point, the city and groups like the Greater Victoria Coalition to End Homelessness had hoped the pandemic would have been under control by winter.

“The discussions have continued, but I think with the thought of not necessarily focusing on how many shelter mats we could find for the Extreme Weather Protocol, but how much housing we can find so that people would be permanently housed,” Thornton-Joe added.

Now that the cold and rainy season is upon us, there have slowly emerged signs of new programs being undertaken to provide more temporary shelters.

On December 13, Mayor Lisa Helps announced that an initiative launched by Aryze Developments and the Greater Victoria Coalition to End Homelessness is seeking to raise $500,000 to build 30 temporary tiny homes out of repurposed shipping containers.

However, these homes would only house 30 people, and that number is contingent upon the group being able to raise another $350,000. There is no timeline available for when these structures will be completed, nor has there been a site chosen for their placement.

Members of the unhoused community at Beacon Hill Park say they have heard inklings of other sheltering programs that are under consideration.

“There was a concept of trying to get giant festival tents and then people [would] put their tents inside tents,” said Shae Perkins.

“That was being worked on for several months and then wound up not going anywhere, and it’s now officially off the table.”

Now, Perkins says the city is working on approval for a project that would see the creation of individual Conestoga Huts to house unsheltered people.

These huts resemble chuckwagon-like structures reinforced with wood and possibly insulated with styrofoam, and which have doors that lock. Similar structures were under consideration in London, Ontario earlier this year.

“It’s not guaranteed, it’s not official and there’s no timeline for it. By the time they actually get approval, funding, [and] get construction together… it could be well into January and February,” Perkins added.

“They would also have to find land to put them on because they couldn’t be in the parks; they’d have to be in parking lots. A lot of people don’t want to be shoved into little corrals in a parking lot somewhere [where they would be] fenced in.”

Jen Wilde, the erstwhile Regional Coordinator of the Greater Victoria Extreme Weather Protocol, confirms that a new initiative is under way to house the unsheltered, at least temporarily during the winter months, but more details are not yet available.

“I’m currently involved in a project where we’re attempting to put together a respite strategy for those who are still unsheltered in the parks,” said Wilde, in an interview with Capital Daily.

The new project is something Wilde has been working on in partnership with the Greater Victoria Coalition to End Homelessness.

She says no further details are available yet because they want to have more components in place before making an announcement, but is herself acutely aware of the level of need.

“As somebody who has been the extreme weather protocol coordinator for 14 years in this city, I struggle every time the wind blows, and the rain comes down and it gets cold outside,” she added.

“I have an automated internal response where my being feels like I should be doing something every time the weather goes bad.”