How a Victoria choir is helping people living with dementia
Business
News
Based on facts either observed and verified firsthand by the reporter, or reported and verified from knowledgeable sources.

October 30, 2021
Get the news and events in Victoria, in your inbox every morning.
Thank you! Your submission has been received!
Oops! Something went wrong while submitting the form. 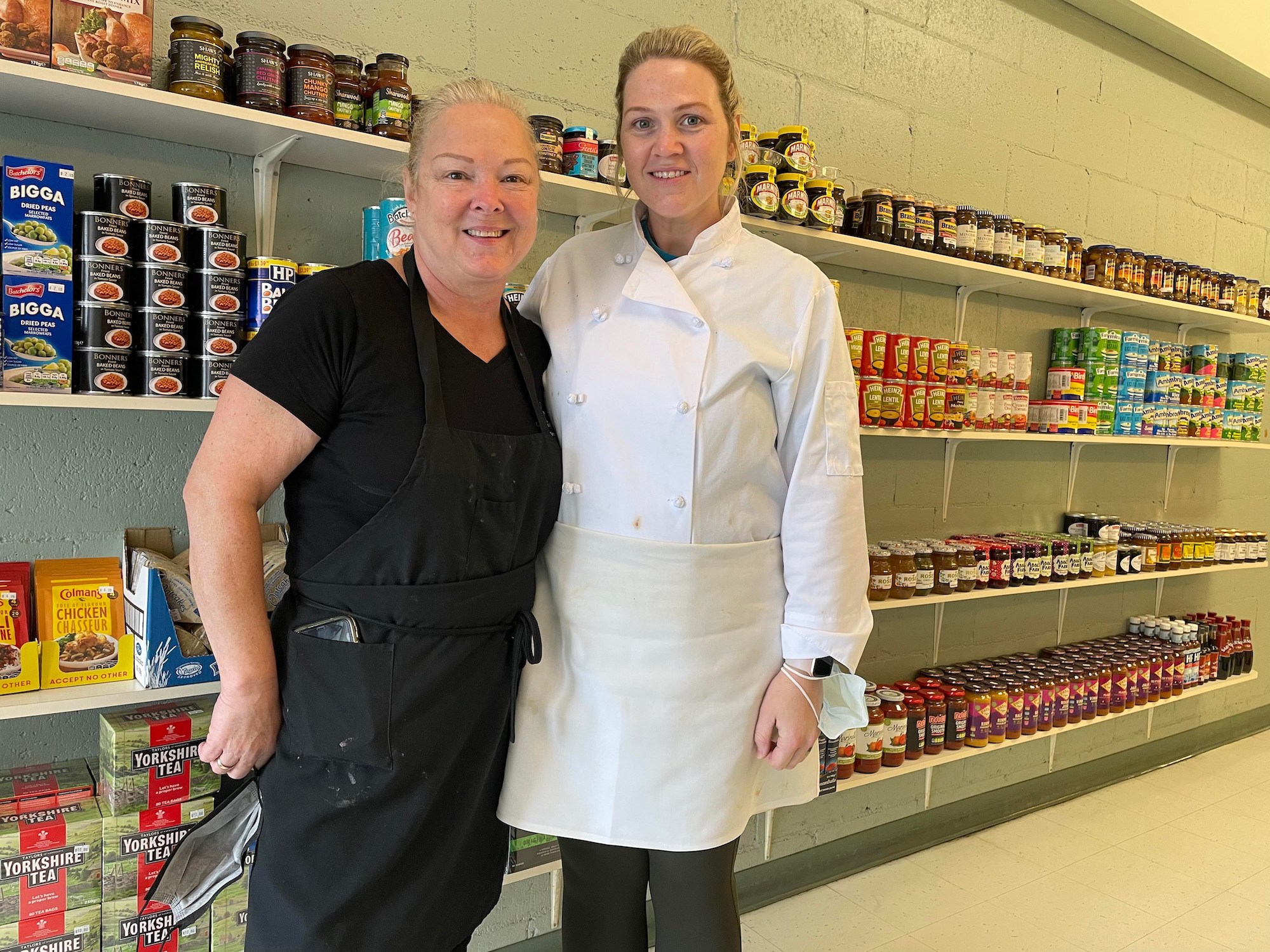 Julia Ripley and her daughter, Toni Lee, at Chef on the Run in Sidney. Photo: Brishti Basu / Capital Daily

Not much has changed at Chef on the Run in the 25 years since the business first opened in Sidney. Much of the menu of homemade English cuisine they served in 1997 remains the same and ownership of the business is soon to be passed on to another generation of the same family.

It’s a business model that Julia Ripley says her dad, Roy Greve, always knew would work. Greve moved to Vancouver Island from England in the 1960’s and ran numerous restaurants in Tofino and Ucluelet before deciding to move to Victoria.

Once here, he opened a small deli. “Then he found that he was going out delivering and people were [calling him] ‘chef on the run,’” Ripley said. “Sometimes people would write their cheque to ‘Chef on the run.’”

So that’s what he named his restaurant in Oak Bay. In 1996, Ripley and her husband Alan moved to Victoria and launched a Sidney branch of the business with the same name. “We would work the same and we’d have the same menus when my dad owned [the Oak Bay restaurant],” Ripley said.

Then, about 15 years ago when Greve retired, the family found it was too much to handle on their own. So they decided to sell the Oak Bay location and keep running the Sidney storefront themselves.

“You do really need people to be there,” said Toni Lee, the Ripleys’ daughter, who now runs the kitchen in Sidney. “To run the way you want to run, you want to be present and...at the time it wasn’t possible to be in two places.”

From the street, the Chef on the Run building looks modest, nestled beside a larger thrift store with the same green roof. But on the inside, the rented space is more than big enough to accommodate their needs.

Several large deli cases showcase hot takeout meals like roast pork, chicken tenders, beef curry, and more. Another displays an assortment of fresh pies and puddings. There’s a freezer section with frozen meals that customers can take home to heat up in their oven or microwave. Nowadays, Ripley mostly works in the front, taking orders, packaging, and chatting up the clientele. Behind it all lies a massive kitchen, run by Lee.

This is where she and a team of chefs—including her husband, Steve—prepare around 1,500 meals a week for both take-out and delivery. From that kitchen, meals go out every weekday across Sidney and North Saanich, twice a week to customers in Brentwood Bay and Central Saanich, and once a week to Salt Spring Island and further up Vancouver Island with the last stops in Chemainus.

Lee was around 14 when she first started helping out in the business, working part-time after school and on weekends. Once in university, she studied accounting and tried it out as a career in England and Canada for a few years before deciding a desk job wasn’t the right fit for her. So, in 2016, her dad Alan Ripley began training her to take over his role.

Everything from the recipes to the way a kitchen of that size should be run was taught to Lee by her dad, who passed away suddenly in August 2021. They didn’t close down the shop.

“Even when it happened that week, we still had to come in,” Ripley said. “We were coming in at like four or five in the morning because we obviously couldn’t face anybody, but you still have to go in. What are you going to do? Say to people you’re not gonna open?”

Ripley herself was 25 when she and her husband first opened Chef on the Run in Sidney. Back then, the storefront was located on Fourth Street, where it stood for 10 years before the family moved it a few roads over to Second Street. Back then, it offered more catering, and stocked fewer imported English grocery items.

Everything else has stood the test of time, and are favourites among not only for recurring customers but also for a new set of clients who began ordering Chef on the Run during the COVID-19 pandemic.

“We saw a lot of influx of people who either don't cook, or it's hard to cook for themselves, or didn't want to go out to the shops,” Lee said.

Unlike most restaurants which had to shut down at various points over the past two years due to pandemic-related restrictions, Chef on the Run stayed open because it was considered more of an essential service by their customers, many of whom are elderly and at higher risk of catching a severe case of COVID-19. For some, waving at the delivery driver through the window as they dropped off a meal would be the only human interaction they had all day.

“Some people may have had Chef five days a week and then they would go out over the [next] week,” Ripley said. “So during COVID, they would probably get all of their meals from us when they weren’t going out or restaurants weren’t open.”

The company hired two extra employees to keep up with demand, but business is still busier than ever.

“The thing with any food business is we’re open from nine to five but we have to get in here before seven,” Ripley said. “Sometimes you are here til five and then you’ve still got paperwork to do when you get home because we do our own bookkeeping and day to day stuff.”

Those long hours are the reason why she and her husband had originally pushed her daughter to pursue accounting instead of the family business, but Ripley herself admits that even after 25 years, she still enjoys doing the work. Sometime in the next five years, she’ll retire and pass the baton over to Lee entirely.

“I'll always be here probably every morning to set up,” she said. “But I am looking forward to getting some freedom.”

Capital Daily: What does Victoria—or Sidney—need to make it easier to run a business here?

Ripley: Better parking. We actually have four [parking] spots, and there's a lot of businesses that don't have any spots.

Lee: [The town] seems to be growing a lot and a lot of people are moving here but there’s not enough parking. [Otherwise] I’d say the Sidney business association is doing a pretty good job.

Ripley: A lot of it at the moment is food cost. Because basically, costs have gone up all above the board, and we always worry about putting the meal [prices] up… because we like to be affordable for people.

Lee: And I would say staffing… because when you can’t get staffing, it puts pressure on the staff you do have.

Lee: The home decor and antique furniture stores. There’s quite a few in Sidney and I’ve gotten a few chairs from there that they revamp. Maybe that kind of store for me.

Ripley: And I’ll just help her out.

Ripley: Yeah. Since we’ve been going for 25 years, it’s important to make sure our equipment—like deli cases and refrigeration—are [up to date].

Ripley: I think because we enjoy doing it. Because even though it’s mad busy, you do feel like you’ve accomplished something.

Ripley: Throw all of these face masks in the bin. [both laugh]

Lee: I think for me it would be to go somewhere and not have so much to think about, whether that’s, ‘Do I have my face mask?’ ‘Do I have hand sanitizer?’ or ‘Do I need my vaccination card?’ Not having the pressure of so much worrying about everything that you have to be looking out for—I might actually relax.

Ripley: Years ago, we had to move out of Fourth Street and we had to get the Second Street location. At the time, we were having trouble finding somewhere to go. We did put in an offer to buy [a property] on Third Street but it fell through. And that’s probably the biggest disappointment I would say we’ve ever had.

What do you wish you knew before starting Chef on the Run?

Ripley: There's probably not really much I wished I'd known—except, I wish I’d known how much of a time commitment it would be.