June 28, 2022
Get the news and events in Victoria, in your inbox every morning.
Thank you! Your submission has been received!
Oops! Something went wrong while submitting the form. 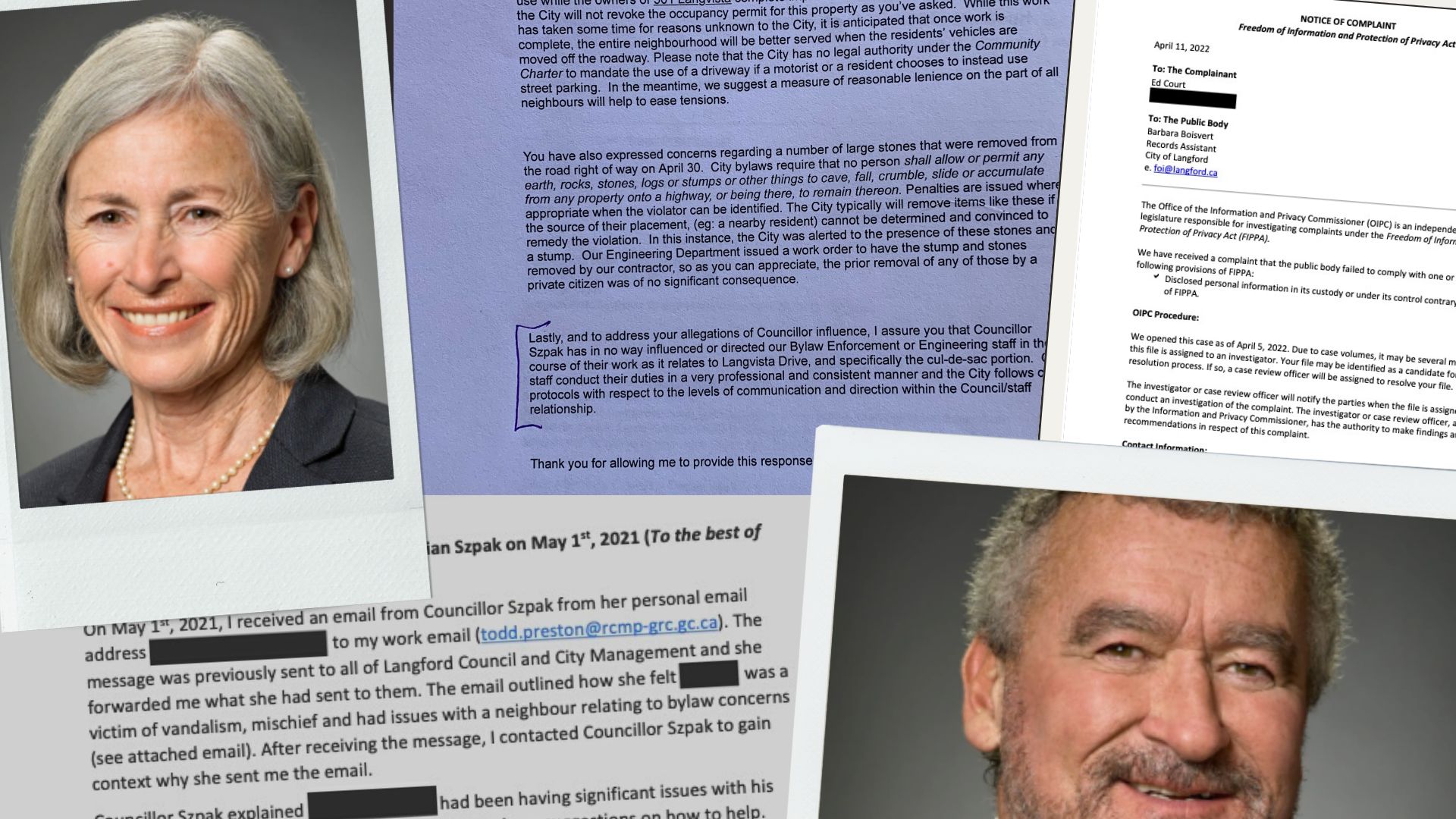 What started as a private dispute between neighbours has blown into a public conflict between Langford politicians, escalating an already tense working relationship.

At the root of the dispute is a street parking spot that, by law, no single resident owns.

In 2020, Coun. Lillian Szpak’s son and daughter-in-law Michael and Tanya Sunshine, moved to a Langford cul-de-sac. Their house had no driveway, but according to Szpak, the previous owners had an agreement with a neighbour for a right of way. The neighbours no longer wanted that agreement, so the Sunshines applied for a permit to build a driveway, and while construction was underway, they parked on the street.

What ensued was a drawn out parking and bylaw-related conflict between neighbours about shoulder parking, boulder placement and removal, and emergency vehicle access. The dispute also involved Coun. Matt Sahlstrom, a friend of the neighbours Ed and Nichole Court.

Things escalated last May to the point that Szpak said she was afraid for her family, and she emailed Westshore RCMP Commander Todd Preston to voice her concern.

That contact has landed Szpak in hot water on council, because Szpak was then chair of the city’s Protective Services Committee. That committee covers policing and bylaw, the two issues at stake in the conflict. Szpak says she reached out to Preston as a citizen—she did use her private email—but some of Langford council see it differently.

In January, Langford staff told Szpak that there had been a complaint filed to the BC Ombudsman and Office of the Information and Privacy Commissioner (OIPC), though details of what is alleged and who is named have not been made public. She was advised to step down as chair of Protective Services while the investigation was ongoing, which she did “under duress.” At that point Szpak said she had seen no documentation of an official complaint, but followed staff’s suggestion. She resigned in February in an in-camera meeting of council where Coun. Roger Wade was appointed chair until any investigation by the Ombudsman or OPIC is complete.

Szpak said she still has not been notified by either body that she’s being investigated.

Ed Court has filed two complaints with OPIC against Langford’s Records Assistant, asking for unredacted records. The Courts also wrote a letter to mayor and council, dated June 12, accusing Szpak of harassment, libel, and false accusations of violence and vandalism. They allege that “Szpak used her Councillor authority to manipulate the Langford Bylaw department and convinced them to ignore multiple complaints regarding [redacted] violating Langford bylaws.”

Szpak provided The Westshore with a May 2021 email from Langford’s Director of Corporate Services Braden Hutchins (currently on parental leave) to Ed Court in response to a complaint, which concluded, “I assure you that Coun. Szpak has in now way influenced or directed our Bylaw Enforcement or Engineering staff in the course of their work as it relates to Langvista Drive, and specifically the cul-de-sac portion.”

Hutchins reiterated that street parking is not designated for the property it's in front of, but is open to all on a first come-first serve basis—and that the City doesn’t actually have any legal power to force people to use driveway parking spots instead of parking on the street.

At first the complaint was undue influence of Langford bylaw department, but it has now broadened to include the RCMP; this February, Westshore RCMP Commander Preston wrote a letter to Mayor Stew Young summarizing his memory of Szpak’s email and his subsequent interactions with her. He ended the letter saying, “Regarding my perception of appropriateness, I felt uncomfortable knowing her position as Chair of Protective Services. I’m always cognizant of conflict of interest.”

At the June 20 council meeting, Sahlstrom asked Szpak to explain to the public her reason for resigning from the committee, something Szpak says is unheard of in council.

“We have never had a complaint letter from a resident brought forward in open meeting like this,” she says. “It was a bizarre performance.”

Sahlstrom cited file numbers for the Ombudsman and OPIC, but neither body would confirm the specifics of the investigations or provide a timeline, citing privacy constraints.