June 26, 2021
Get the news and events in Victoria, in your inbox every morning.
Thank you! Your submission has been received!
Oops! Something went wrong while submitting the form. 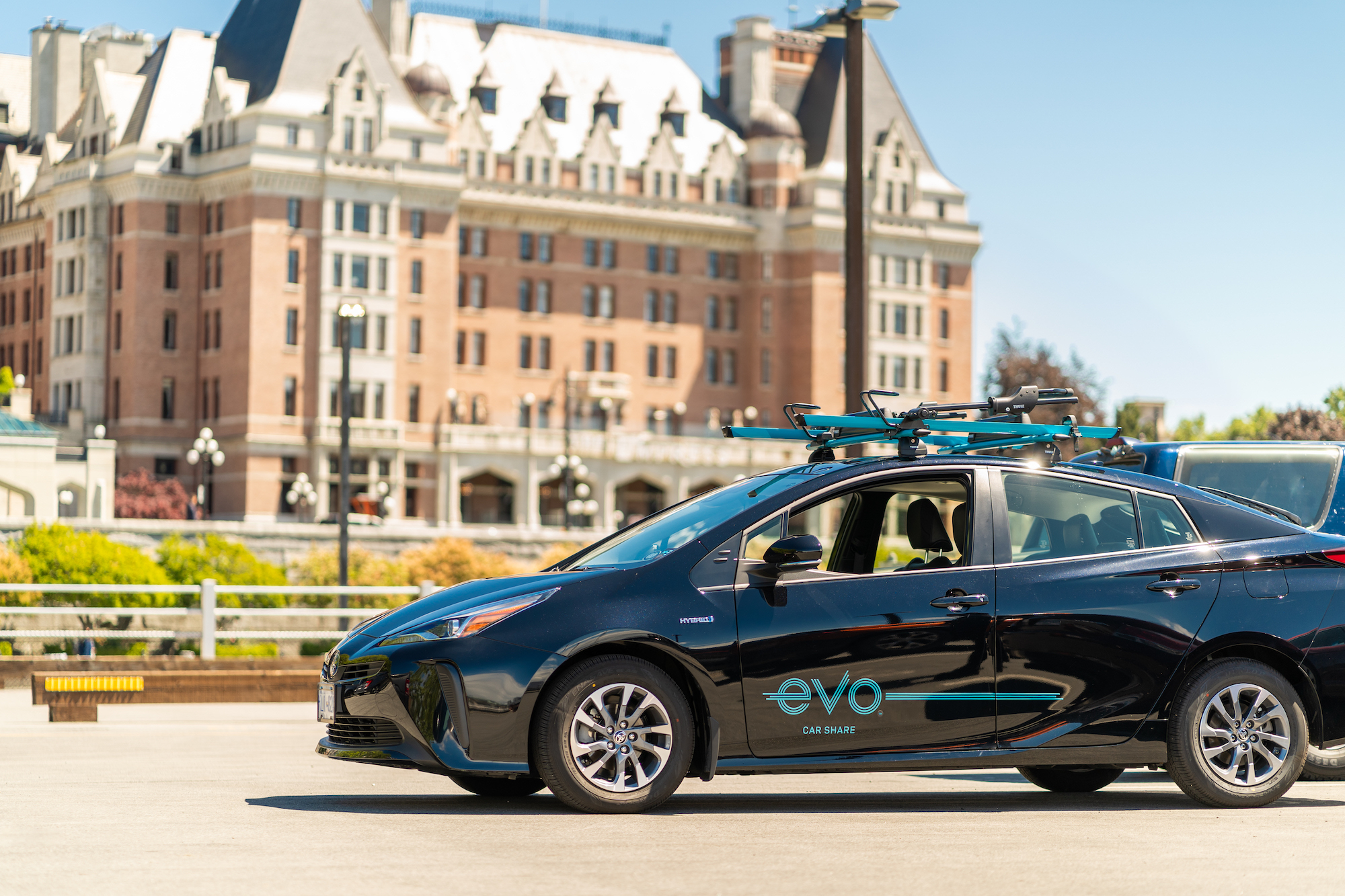 Evo is coming to Victoria. The Vancouver-based car sharing company will make its first expansion out of the Lower Mainland in August. The move is part of a two-year pilot program with the City of Victoria, and will bring a fleet of 80 Evo-branded, Toyota Prius hybrid cars to the Capital Region District.

Evo will also act as the first competitor to the region’s predominant car sharing service, Modo, since the Boston-based car share company Zipcar shut down operations in BC last year.

“Victoria’s been on our list for a long time; it’s a pretty natural progression,” Dave Wharf, Evo’s senior manager of business operations, told Capital Daily. “We’ve been slowly expanding the zone in Metro Vancouver for awhile, but Victoria’s always been like, ‘Hmm, that looks interesting.’”

Victoria’s downtown population density and commitment to sustainability were factors that attracted the company to the South Island over other regions of the province.

Sarah Webb, the City of Victoria’s manager of sustainable transportation planning and development, told Capital Daily that Evo’s expansion had been in the works for a couple of years and will give folks in the city a second car-sharing option.

“As part of our mobility strategy, GoVictoria, we identified the benefits of car sharing and how it could support our residents and businesses in the city,” Webb said.

“We’ve been looking, as a city, [at] how we can support the expansion of more transportation options for our residents, businesses, and families.”

The origin of the car sharing movement can be traced back to 1948, when a housing cooperative in Switzerland started a small car share agreement. Eventually, in the ensuing decades, car share projects popped up across Europe, and Germany’s StattAuto is widely credited as the successful operation who paved the way in the 1990s for similar programs globally.

“Car sharing, I would say, has a role in the overall picture of moving to a more sustainable system,” said Tom Hackney, a Policy Advisor at the BC Sustainable Energy Association. “What it does is that it enables people to have mobility without needing to own vehicles.”

Before the car sharing service Car2Go, now known as Share Now, shut down business in North America in 2019 due to an increase in competition and operation costs, the University of California at Berkeley did a study on the company that found them effective in reducing car emissions in Canada and the US.

In the 2016 study, which gathered data from over 9,000 Car2Go users in Vancouver, Calgary, and Seattle among other cities, it was estimated that between 10 to 29 million vehicle miles travelled were prevented in each city per year. They also reported that each Car2Go vehicle removed roughly seven to 11 cars on city roads.

Wharf sees car-sharing as being able to complement public transit in local neighbourhoods. In a model he calls the “first- and last-mile solution,” Wharf believes Evo can serve as a medium to get folks home or to their place of arrival after commuting into the downtown core from transit.

“Especially around transit, ultimately, you’re taking a bus somewhere and you have that long walk from the road that it drops you off on to your house,” he says.

“If there’s an Evo there you can hop in it and drive down the street for a couple minutes and park right out front your house. That makes people think, ‘Maybe I will take transit more because I know I don’t have that long hike, or it’s raining.’”

Modo, which already has more than 100 cars in Victoria, allows for members to pick up and drop vehicles from a “home base” location. The majority of cars in their fleet are hybrid, with a few electric vehicles.

“The idea we try in our model is to have a choice of two, three, cars within a five minute walk of where our members live,” says Patrick Nangle, CEO of Modo. “It comes pretty close to replicating what it might have been like if they owned their car.”

Unlike Modo, Evo users don’t need to return the vehicle to the same spot from which they picked it up. Instead, in coordination with the city, Evo has an approved “20 km home zone” where consumers can park their vehicle in a designated parkade spot, residential street space, or metered stall in the downtown core for free.

Evo also has four reserved parking stalls at Camosun College’s Lansdowne campus, and is in talks with the University of Victoria about leasing parking spaces on their grounds as well.

Webb is excited at the prospect of Evo acting as a “one-way” option for Victorians that will give them a different car sharing service to choose from as opposed to Modo’s round-trip model.

She also says the city hasn’t heard any concerns from residents about the designated parking spaces given to Evo, and says the move is a glimpse into what they hope to accomplish in the future to support more innovative transit options in Victoria—especially considering the CRD’s population is projected to grow by 20% to more than 493,000 in 2038.

“Cities around the world are looking at how to value and prioritize their curb space to promote sustainable transportation, high occupancy vehicles, and shared mobility,” she said. “So that means we’re going to be dedicating more space to transit, walking and cycling. And allocating more curb space to innovative uses like car sharing.”

Hackney applauds the decision to bring a second car sharing service on board in Victoria, and hopes it will increase sustainability on the roads.

“In general, the more people who can do car sharing rather than personal ownership of cars, I think is a positive step,” he said.

Evo isn’t looking towards Modo as their competitors, despite being on the precipice of entering the Victoria market currently dominated by Modo. Wharf hopes that by having another car sharing program available to Victoria consumers it will bring more attention to car-sharing as an option.

“Our competitor is the privately-owned vehicle,” Wharf says. “Myself living in Vancouver, having Evo, transit, a bike, is something where my family has been able to go down to just one car. So, it really allows you to go, ‘Ok, what am I going to choose today? What matches my needs?’”

Among the reasons Nangle believes why Modo has found success in Victoria over the years is a combination of affordability and the region’s public transit and biking infrastructure.

He expects car sharing will continue to grow as a mode of transportation in Victoria, and Modo is focused on bringing in more electric shared cars to its fleet.

“If everybody that has a car today bought an electric car tomorrow, we’re not really going to be in a significantly better place just in terms of traffic congestion, use of land, and let's not forget about the environmental impact of materials they use: lithium, copper,” Nagle said.

Standing between Modo and that target, however, is a lack of car charging infrastructure and difficulty in accessing government grants.

Nangle declined to comment on Evo’s arrival to Victoria, citing it’s not in their practice to comment on what other organizations are doing.

Currently, Evo is running a promotion that includes free membership and driving minutes ahead of the Victoria launch.

Moving ahead in their two year pilot, Webb says the company will monitor their vehicle usage and determine whether more cars need to be added to the Island fleet. She says Modo has had success in the past with Victorians, and thinks there is an appetite for another car-sharing company in town.

“[Car sharing] gives people freedom, it gives them freedom to take the bus, ride their bike, and when they need a vehicle they have access to one,” Webb said. “Both Modo and Evo are really a part of 21st century cities.”