Suspended school board trustees McNally and Paynter reinstated by BC Supreme Court
Business
News
Based on facts either observed and verified firsthand by the reporter, or reported and verified from knowledgeable sources.

November 27, 2021
Get the news and events in Victoria, in your inbox every morning.
Thank you! Your submission has been received!
Oops! Something went wrong while submitting the form. 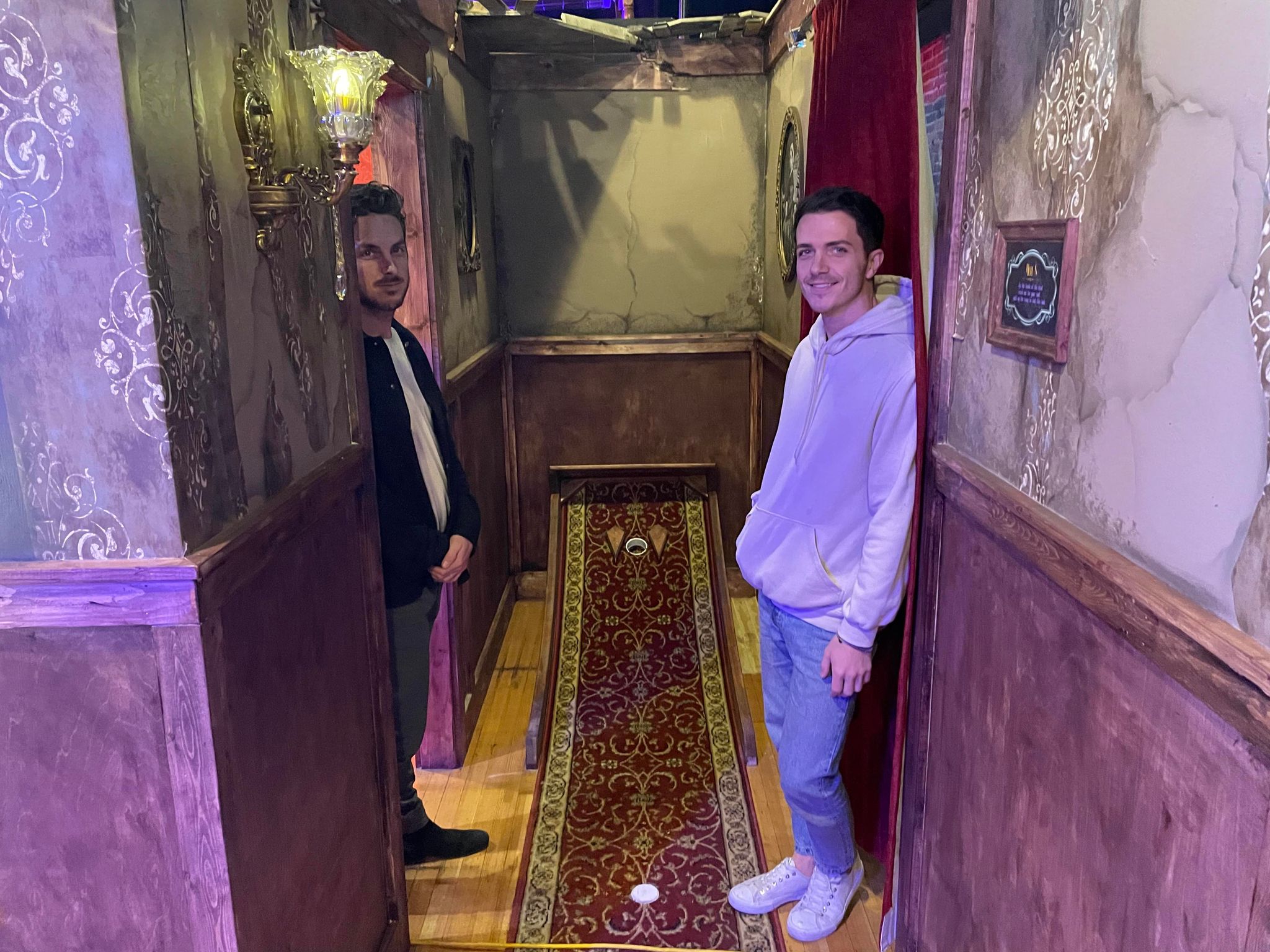 ‍Capital Daily business coverage is supported by Tiny but the stories and journalism are produced independently by Capital Daily. Per our policy, Tiny had no editorial input into this story.

“It was literally the moment we walked in the front doors that we knew it was ours and we wanted it,” Lovell said.

Everything from the dark ceilings to the original brick walls and the ideal location in the heart of downtown was ideal for what they had in mind: a haunted mini-golf and ping pong lounge experience.

The couple, now in their early 30s, launched their first attraction six years ago: the Horror Escape Room on Broughton Street, an immersive experience in which groups go through a series of interactive rooms solving puzzles with just 45 minutes to get out. The idea was an instant hit and continues to be popular—but it no longer belongs to Lovell and Roberts, who sold the business two years ago.

“We wanted to sell while we were on top and the escape room was doing well, so there were some financial motives,” Roberts said. “But overall, we did have a vision for something bigger, and so we took the funds from that and were able to put it into this.”

It’s impossible to grasp the magnitude of the 3,000 sq. ft. space upon first entering, as most of it is hidden behind an ominous Victorian mansion. Within it lies a series of twists and turns that lead you through an elaborate mini-golf course, with selfie walls and couches for stops along the way.

In this maze, visitors will encounter placards with instructions on how to play—altogether necessary when you find yourself faced with wrinkled carpets, bathtubs, and grandfather clocks to putt through—against an intricately designed backdrop. The couple expanded on the space by adding a mezzanine floor which houses one of two private ping pong lounges that patrons can rent out by the hour.

“We also built the whole attraction to be pandemic-friendly,” Lovell said. “For the most part, you're only with your bubble throughout each of your experiences, oftentimes completely in your own section.”

The couple decided to do a test run of the business in order to work out any kinks by inviting people to a soft launch on the weekend of Halloween. Despite zero advertising, the business was a hit, booked solidly that weekend—a feat Roberts attributes to both the holiday fitting their theme, and online chatter about the business.

Still, having a soft launch proved to be a good idea. Over Halloween weekend, the couple discovered several small kinks—like raised turf that sends a ball up instead of across, and pipes not angled well enough for a putt to make it into the bathtub—that they were able to fix before their grand opening on Nov. 7.

“No one was scared, which was the goal,” Lovell said. Unlike the Horror Escape Room business, the idea for the mini-golf and ping pong lounge experience is to keep it more family friendly and accessible for all ages.

While the business didn’t open their doors to the public until this fall, the couple had been ready to set up and find a venue for their idea in early 2020, right before the pandemic hit.

“We were looking at locations up until the day we went into full lockdown,” Lovell said. They picked up the search again in the summer when the pandemic appeared to slow down. But the right spot didn’t turn up until spring 2021.

Their idea was a perfect fit for the Yates Street location, which the couple sees as an entertainment hub, with movie theaters, a board game cafe, and numerous eateries to keep people occupied.

The goal is for Haunted Manor to become a year-round, not seasonal, indoor attraction. In their experience, though, this could be a difficult feat to achieve.

“There is quite a dip [in demand] that comes right after Halloween and then lasts pretty much ‘til spring break,” Lovell said. “We're really trying to rewrite that story because with Victoria having such a long rainy season, it doesn't make sense that there would be an indoor entertainment lull throughout the winter.”

People who go through the course more than once, on different days, might notice some eerie changes.

“We’ve already had inspirations for new holes and new set decor and a little bit of new theming in certain areas,” Roberts said. “If we get tired of a hole or we see room for improvement, we’ll always be making those adjustments,” added Lovell.

Starting November 2022, Lovell and Roberts plan to build and launch a whole new Christmas-themed mini-golf course to replace the Haunted Manor course for the months of November and December. This course will go one step further in creating an immersive experience by adding scents—like gingerbread and pine—to the list of sensations visitors will encounter within.

The couple says they held off on adding smells to the existing Haunted Manor course because any odours to match this theme would need to be pungent and off-putting—not exactly the crowd-pleasers Lovell and Roberts are proving themselves adept at delivering.

Lovell: I would say the permitting process [should be] sped up and simplified drastically. It took us almost three months to get our permit, which cost us a lot of money and stress and time.

Lovell: That we could go into another lockdown, of sorts, that we could be impacted by mandates.

Roberts: Yeah, the uncertainties of the economy.

Lovell: None locally. We do have business mentors that we work with, but they’re not local. But we are huge supporters of local business in general. On our menu, we have Yonni’s Donuts, Cold Comfort [ice cream], Phillips beer, Hoyne pilsner, and Sea Cider. So we're really proud and excited to offer those products as we love them ourselves. And we think it's cool that we have so many amazing local businesses in town.

Roberts: One of the options was a cafe, a cool coffee shop. We love creating immersive experiences—just a cool atmosphere for people to hang out in. So that was one of the previous businesses that we were going to open between Horror Escape and this one. And then when the pandemic hit, we decided that food and beverage was a hard industry to be successful in.

Roberts: I would say yeah, cryptocurrency right now—as little as I understand about it—it seems to be where we’re headed. So, good to put your money somewhere betting on the future.

Roberts: I think because it’s such a creative business and we both, I’d say beyond being entrepreneurs, we’re artists. So at the end of the day, we have this big canvas that we can continually update and recreate. We just want to create a fun experience for our guests.

Lovell: Even when we work an eight hour day, we're usually here like six hours before our shift, just making sure everything is the best it can be.

Lovell: Just show everyone our smiles, take masks off.

Lovell: Previously, I think, at times we questioned if selling our last business was the right decision, especially with this one taking so long to get up and running. But now that it’s all come full circle, we’re really grateful that it all happened. It couldn’t have happened any other way too; we wouldn’t have had the money to build this.

So I guess fundamentally we just don’t believe in failure. There's always a lesson underneath and as painful as it can be, it usually leads you to somewhere greater. This venture has been a great example of that, because it was a pretty rough ride to get here and now that we're open, it’s like we forgot all the challenges and we’re just focused on how exciting it is that it’s actually like a real attraction.

What do you wish you knew before starting Haunted Manor?

Lovell: We learned a lot and we were able to apply a lot we learned from Horror Escape and take some of our talent that we had hired over the years from there, so that was hugely beneficial. But that said, you know, fundamentally, the project is a construction project for the most part. And construction is one of the industries that has the most headaches. So we did have challenges with carpenters, and just labour and bringing our vision for the level of quality we needed. But I don't think we could have applied any of that. It's just kind of trial and error, hiring people and working to get them to create what you're looking to create at the highest level. And if it doesn't work, then paying someone better to re-do it.