October 16, 2021
Get the news and events in Victoria, in your inbox every morning.
Thank you! Your submission has been received!
Oops! Something went wrong while submitting the form. 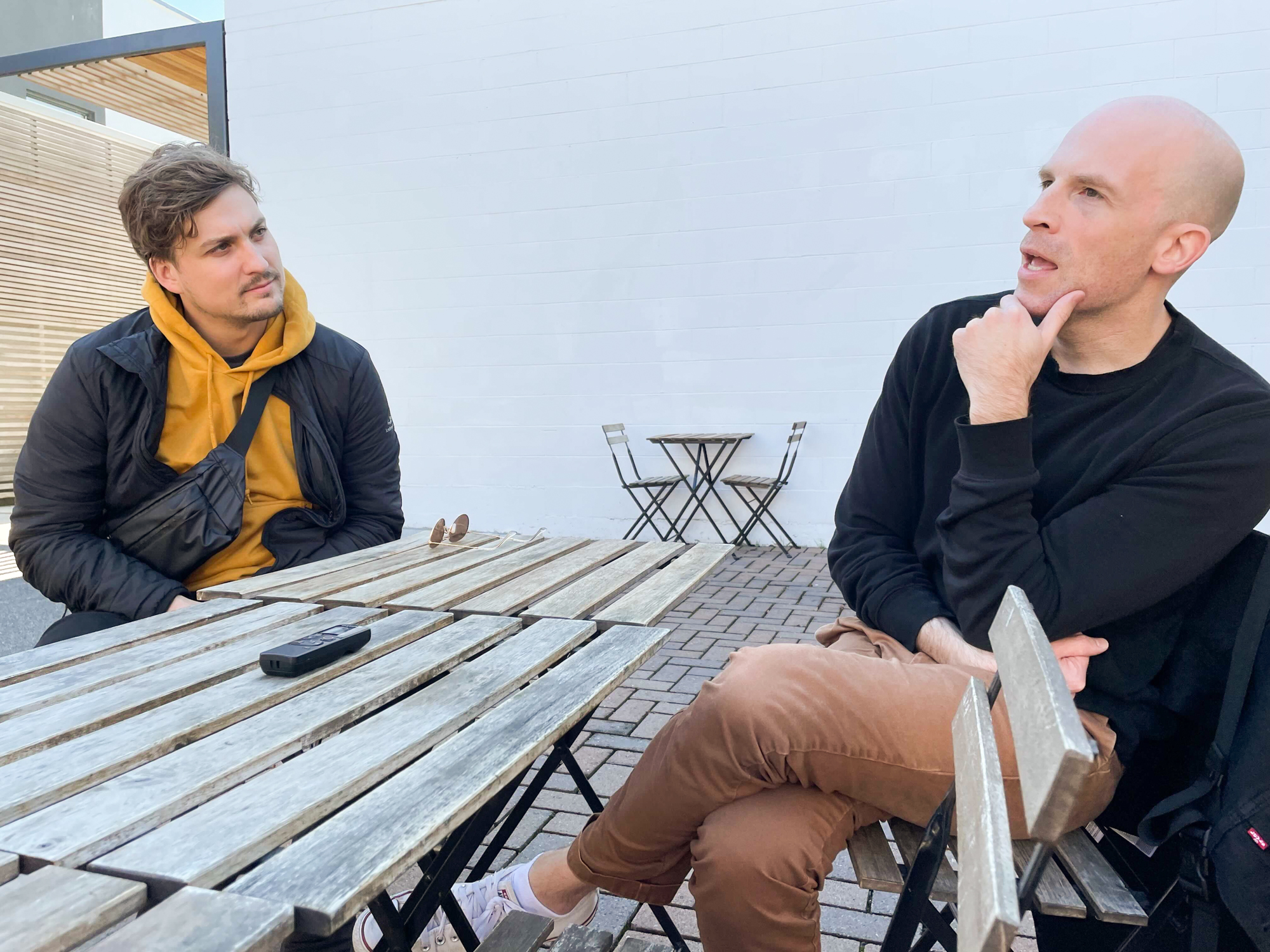 Kevin Matviw thought improv shows would become a thing of the past when the COVID-19 pandemic first struck North America. “I'm a pessimist,” he said. “I was like, ‘I’ll never get to play in front of a sweaty crowd of people that are all drunk in a bar again.’”

So he was pleasantly surprised at the uptake when he and Nash Park announced the creation of a new comedy collective, Garden City Comedy, last month. The business offers beginner and intermediate level comedic improvisation classes, and comedy shows they plan to host at least once a month.

Matviw is a veteran improv actor, teacher, and writer who spent 15 years honing his craft in Toronto, 12 of which were spent working at Second City—one of the biggest comedy institutions in North America. He moved back to his hometown, Victoria, right before the pandemic to live with family, save money, and venture out to do a solo show tour.

He started doing stand-up comedy at local bars, which is where he was noticed by Nash Park—a local up-and-coming comedian who has been doing stand-up in town for about three years. Park loved Matviw’s performances so much, he decided to take him out for a drink and pick his brain.

The pair eventually started discussing the idea of Garden City Comedy and began meeting up at the warehouse Park rents to run his coffee business, Drop Coffee Service. “It was cool to get to hang out,” Matviw said. “Even if we didn't have an audience, we were doing [improv] for the coffee machines.”

The business is so new it doesn’t have a permanent location.

“The end dream would be to have a little theatre of our own to run the shows [and] classes,” Park said. “Right now we’re just spreading all of these ideas out in the city at different venues.”

The classes—both to be taught by Matviw—will be held once a week for six weeks at a studio space above Wild Coffee on Broad Street, while the company’s first show, titled “The Late Night Show with Nash Park,” will be held at the Victoria Event Centre next week.

Within three weeks of announcing them, the beginner classes were sold out and the duo had received nearly a dozen inquiries about the intermediate level classes even before they’d formally announced ticket sales.

Both were surprised at how much enthusiasm their venture was met with, considering the only promotion they did was putting up posters and running a targeted Facebook and Instagram ad.

For a small city, Victoria already has a vibrant scene for aspiring comedians, with local talent being featured at recurring shows in bars like The Mint and at the Victoria Event Centre. Some, like Hecklers, tend to invite more professional comedians, said Park, so Garden City was created to be a more accessible space for beginners.

“The first [class] is called ‘Learn Improv,’” Matviw said. “This is our attempt to reach out to people that have never done it before, who are excited about trying something new, want to meet new friends and laugh a lot in the process.”

Those classes are cooperative, group events.

“If someone is nervous about the aspect of doing improv and being put on the spot, a lot of the classes in the beginner level are all about working as a group. No one has to be performing for anybody in front of an audience or anything,” he said. “In the end, people are probably gonna make a lot of friends. That's usually what happens with these things.”

The second set of classes, called ‘Level Up’—for which tickets are yet to be announced—is meant for those who want to dive deeper into the craft of improvisation, explore different styles, and learn more techniques.

“It’s kind of like martial arts in a way,” Park said. “The beginner classes are all about learning those foundations, and it’s not until you get more experience that you can express yourself more fully.”

The line-up for their first show at the Victoria Event Centre—in which Park will take the stage as the host of a classic late night TV show—features several local artists, like Dan Duvall and Aidan Knight performing or acting in sketches.

The proceeds from ticket sales and classes are expected to help cover the already relatively low startup costs of renting venues for the business to operate in, but are not yet enough to pay the two founding entrepreneurs for their time.

“We would love to just do this and have this be the only thing that we do,” Matviw said. “We don't [want] to have an extra job or whatever.”

The plan for now is to have fun and take things one step at a time. Eventually, the duo hopes to end up like Second City, which now has branches in three major cities across North America but had humble origins.

“It started with just a bunch of theatre nerds that were like… ‘We want to do something [that] hasn't been done yet,’” Matviw said. “We're starting something new and who knows where it goes? All it takes is some ambitious nerds who are willing to put in the work.”

Park: The coffee business kind of prepared me for setting this all up. There’s a lot of resources  [but] what would be helpful is like one person, like a liaison. [The city has] all that stuff online but just somebody you could call who knows all the business stuff. They have a resource that's helpful, but I remember the handful of questions I had, it was hard to track the right person down or get them on the phone.

Park: Probably fire? No [laughs]. I’m not that worried.

Matviw: It’s so low risk because we’re just renting a space and there’s not a lot of money up front. I was worried that no one would sign up—I’m a pretty negative person, usually. But I have been pleasantly surprised with the enthusiasm for this thing, considering how little promotion we had to do in the end, really.

Matviw: With Paper Street Theatre Company being one of the—I think maybe the only—improv theatre company in the city, definitely they've been a huge inspiration.

Park: I don't really want to do anything else. That’s what the pandemic solidified. I just felt like this makes me happy. I'm miserable if I'm not [doing this].

Matviw: I can't imagine myself doing anything else. Frankly, this is all I've done. It's a huge part of my identity and that's just the way it is.

Matviw: Maybe [towards getting] our own space. Some place where we could create a literal hub for people to come.

Matviw: The unhealthy need for attention.

Park: It’d be nice to go to a full shoulder-to-shoulder show.

Matviw: How personal should I get on this? I think that when I was in Toronto, I didn’t push myself hard enough. I didn't believe in myself and sort of was waiting for things to happen. The antithesis of that would be a project like this or other [projects] in [my] last few years in Toronto, where I was like, ‘You know what, it's time for me to make my own thing and take charge of my destiny.’

What do you wish you knew before starting Garden City Comedy?

Matviw: I wish I knew that people were so enthusiastic. Then I wouldn’t have been so scared about doing it.