September 28, 2022
Get the news and events in Victoria, in your inbox every morning.
Thank you! Your submission has been received!
Oops! Something went wrong while submitting the form. 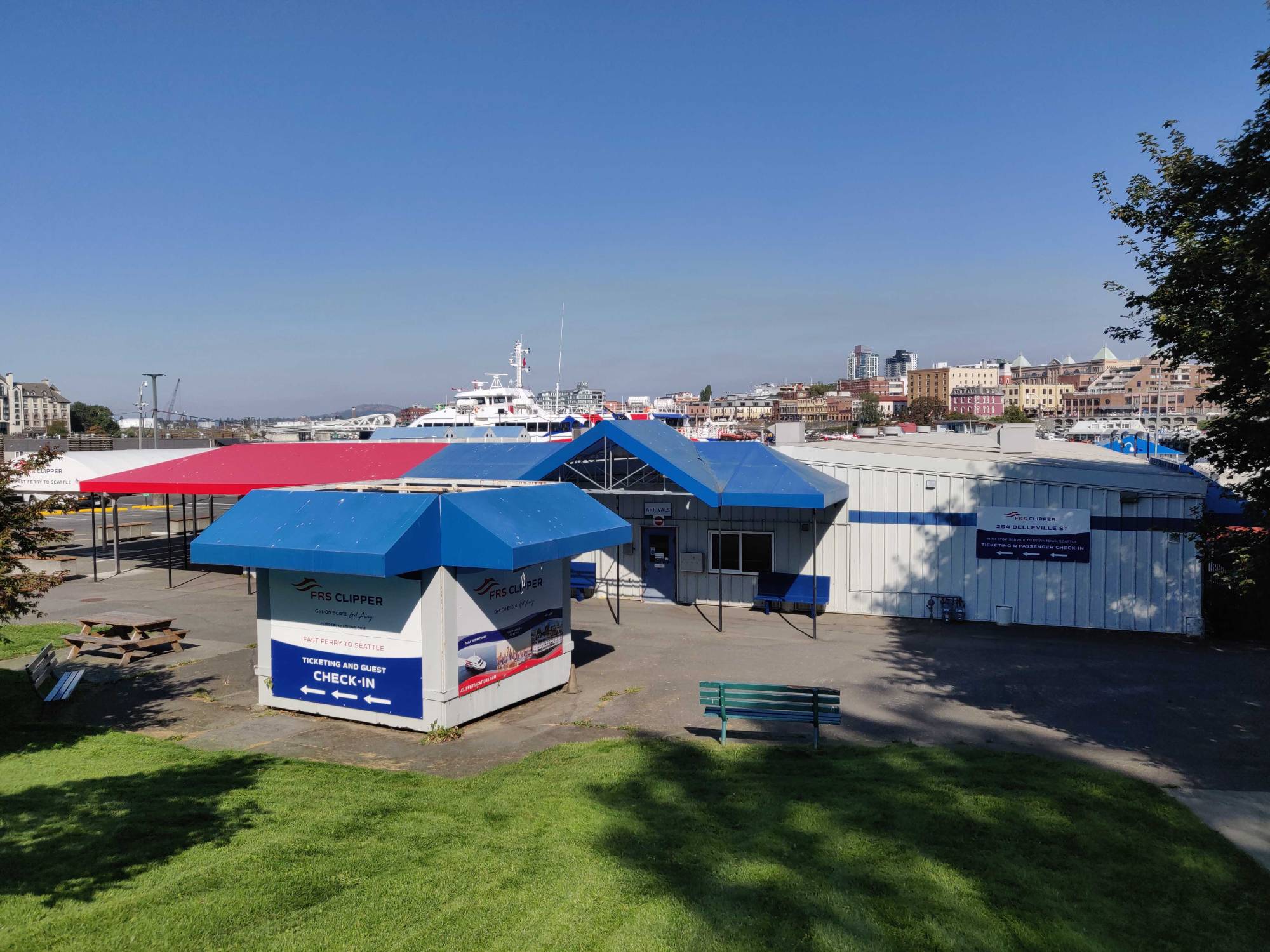 The province held an open house on Sept. 27 for its proposed Inner Harbour terminal project, which is currently in the midst of its month-long public engagement process. At the start of the open house, representatives of the Victoria tourism sector and terminal ferry operators spoke in favour of the proposed project.

The provincially owned, privately run marine terminal on Belleville Street does not meet the Canada-US pre-clearance agreement. These standards, first decided in 2016, were ratified by both countries in 2019. The terminal, which houses two ferry lines going to Port Angeles and Seattle, is a big regional economic driver: statistics provided by the province show that in 2019, the terminal's 680,000 passengers generated an estimated $164 million worth of GDP to the province.

“One of the main intents of doing the new terminal is to be in compliance with that agreement, and ensure that the United States stays here,” said project executive director Lesley Ballman from the BC Ministry of Transportation and Infrastructure. Ballman says that US border customs have indicated that they are prepared to exit Vancouver Island if those standards aren’t met. The departure would also impact other ferry routes between BC and the US, such as the Washington State Ferries route between Sidney and Anacortes, Washington.

The proposal would see existing Clipper terminal infrastructure removed, the addition of a new preclearance terminal and a new commercial goods processing facility, and the replacement of ageing wharf facilities.

The project is expected to be completed by 2027, and cost between $220-290 million. The province is asking the federal government to provide half of the funding for the project.

The two-phase project aims to keep ferry operations going during construction. Black Ball Ferry Line, which runs the M.V. Coho, will continue to operate out of its current docks which were built in 2017. During the construction period—which is expected to take three years—the Clipper’s operations will be in a temporary swing space located within the CPR Steamship Terminal next door. When the project is completed, the two companies will share a brand new pre-clearance facility.

“We are committed to having a joint facility between us and the Clipper,” said Black Ball Ferry Line president Ryan Burls. “We do have a choice to go post-clearance to Port Angeles, but it's not what we would like to have happen.”

Clipper CEO Matthias Pahnke says that it will be a new way of doing things, as the two companies are currently operating independently from each other. “But I’m very confident. We have a good relationship with Black Ball.”

Having pre-clearance would mean that people can simply walk or drive off the other side, says Burls—a fluid, smoother experience for customers. The new terminal could also open the potential to accommodate future growth, Pahnke said.

For more than 12 years, the Maritime Museum of BC has been vying to occupy the historic CPR Steamship Terminal building in the Inner Harbour. Wendy Moreton, the museum’s vice chair, hopes the project next door and the building’s changing tenants might leave room for the museum to move in.

The steamship terminal building, which was built in 1926, is where the museum really belongs, Moreton said.

“It was originally a steamship terminal, so it’s got a nautical history,” she said. “Its location is front and centre on one of the prettiest harbours around, and we feel it’s a natural for a cultural institution as opposed to something commercial.”

The maritime museum has been floating between different sites across the city since it vacated the courthouse building in Bastion Square in 2015 after it was deemed seismically unsafe. At the time, negotiations to move into the steamship building stalled because the rent was more than what the museum could afford. Instead, they moved to Nootka Court until the summer of 2021, where it took over a city-owned building next to the Victoria Conference Centre on Douglas Street.

This is, again, not a permanent location. Moreton says talks are still happening with the province for the museum to move into the steamship terminal.

“We are more than prepared to take any portion of the building that might not be used for [the Clipper],” she said. “I think we could manage in virtually any of the spaces there to get our foot in the door and get started becoming a museum and raising capital for building a world-class museum down the road.”

Ballman told Capital Daily that the company is planning to utilize all of the currently vacant space within the steamship terminal during the project.

In a statement, the Ministry of Transportation and Infrastructure said they are aware of the Maritime Museum of BC's hope to move into the building, and they are continuing to assess potential opportunities for the future use of the space.

The push for progress

As always, the American factor looms large. Plans for the upgrade have been around for decades, Ballman said. But actual progress seem to have only began when the US authorities indicated that they would pull its operations off the Island if things stayed the same

American travellers to Canada are of critical importance to Victoria’s tourism economy, said Bill Lewis, chairperson of the Hotel Association of Greater Victoria. Lewis says that his association has been advocating for an improved facility for years.

Greater Victoria Chamber of Commerce CEO Bruce Williams says the terminal upgrade is long overdue. “It’s the first impression a lot of people get when they come to Canada,” said Williams. “The impression right now is not very good: it’s not very welcoming, it’s not very friendly. There’s no real Indigenous representation.”

“We want to welcome people in 21st century fashion,” Lewis said. “It’s great to see the government is moving forward with the public consultation on this, first and foremost.”

Public engagement for the Belleville Terminal project ends on Oct. 20. You can enter an online response here.

Updated at 5pm on Thursday, Sept. 29 to include a statement from the Ministry of Transportation and Infrastructure.