Capital Daily is part of the Trust Project
latestCOVID
TransportationBusiness
HousingGood News
Rendering of the 20-storey development at 926/930 Pandora Ave.

December 12, 2022
Get the news and events in Victoria, in your inbox every morning.
Thank you! Your submission has been received!
Oops! Something went wrong while submitting the form. 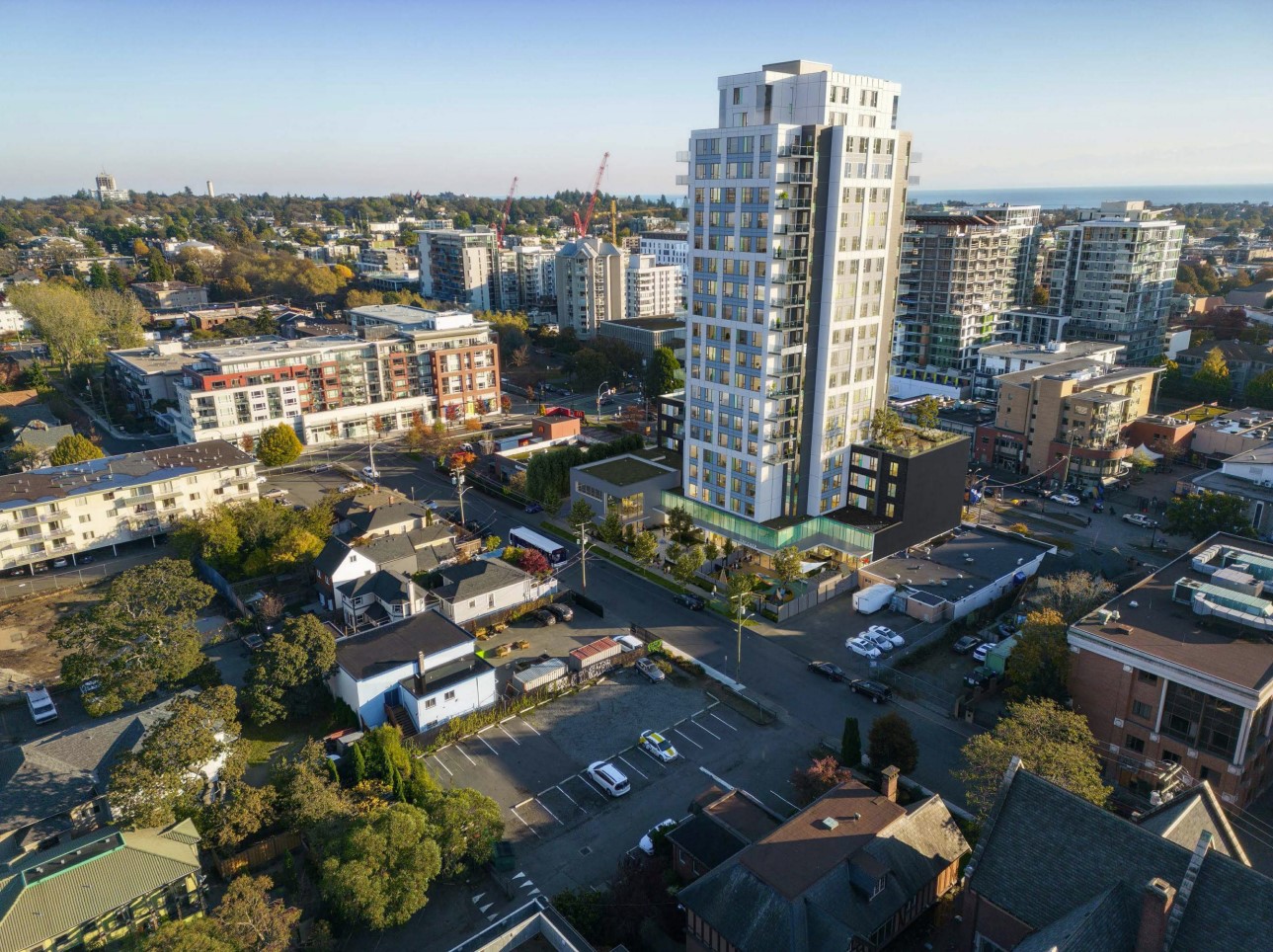 BC Housing has submitted an application to develop a new 20-storey affordable and supportive housing project on Pandora Avenue.

The plan, pitched for the 900 block of Pandora Avenue, includes a total of 205 rental homes—158 affordable and 47 supportive—with a 16,000-square-foot space on the ground floor for a community programming space and 36 child-care spaces. The rental homes would be operated by the Capital Region Housing Corporation, while BC Housing would operate the supportive homes, including offering services like life skills training, employment help, and outreach workers.

The City of Victoria bought the parcel of land at 926 and 930 Pandora Avenue for $9.6 million in April of 2020 with plans to build affordable housing on the lot. In 2021, when the city announced its partnership with BC Housing and the CRHC, it expected the development would open in 2025—but that was perhaps overambitious. In BC Housing’s latest proposal, it estimated that construction would take place from 2024 to late 2027, with residents moving in the following year.

If approved, this proposal would be a big step up, literally, from what is currently on the Pandora Avenue parcel: a one-storey abandoned structure in an area that is already zoned for high density. It also helps meet the need for more affordable housing in the downtown core.

“These new homes will reduce commuters and commuting costs while also supporting downtown business who are facing challenges attracting and retaining employees due to the lack of access to housing,” wrote BC Housing development manager Tara Schmidt in a application letter to the city. She noted that the average market rent in the city has risen by 20 to 35% in the past year.

This project is the first application to go through the city’s new Rapid Deployment of Affordable Housing initiative, designed to speed up the creation of non-market housing projects by co-ops and non-profits. When it was passed in April of this year, then-mayor Lisa Helps said the move was a “fundamental systemic change” that would help “make housing easier to build across the housing spectrum.”

The initiative allows qualifying projects that align with the Official Community Plan to bypass the rezoning and public hearing processes to get them to the building stage faster. This can shave off as much as nine months from project timelines.

The bylaw was among the achievements noted in the latest report on the city’s housing strategy, released in July. According to the report, a total of 1,083 new mon-market rental homes were either approved, under review, or under construction in Victoria.