Hatley Castle, the Colwood estate believed to have been earmarked as a royal residence in case of a Nazi invasion of Great Britain (Hatley Park National Historic Site)
Queen Elizabeth II 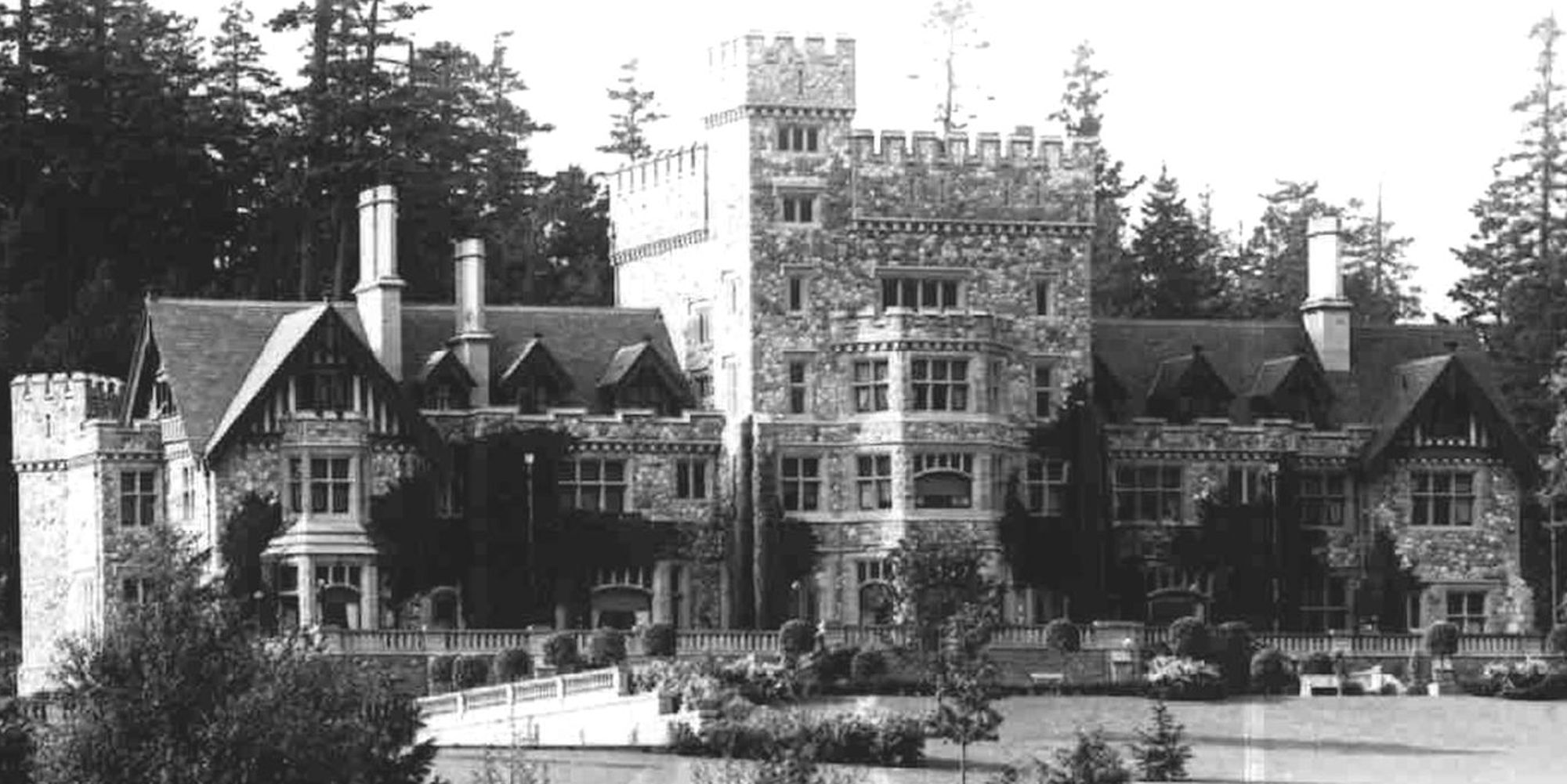 Hatley Castle, the Colwood estate believed to have been earmarked as a royal residence in case of a Nazi invasion of Great Britain (Hatley Park National Historic Site)

It’s the fall of 1940, and from within the walls of Buckingham Palace it’s possible to hear automatic fire from the city’s outskirts. Operation Sea Lion has succeeded in its plan to invade the British Isles.

After smashing British air power via a sustained bombing campaign against Royal Air Force bases, hundreds of landing craft pushed ashore all across the southern English coast. Tens of thousands are already dead on both sides in a battle that has utterly devastated southern England. British defence authorities had prepared for the German arrival by stockpiling poison gas and rigging up the coast with fire bombs capable of transforming whole beaches into a wall of flames. The measures may have slowed down the invasion, but they have inspired a terrible retribution.

Prime Minister Winston Churchill has vowed to stay to the bitter end, and has begun to muse that his last moments as government leader will likely be spent at the controls of a machine gun. At the same time, he is begging the Royal Family to flee the country to ensure some continuity of British government should the country fall.

Just after dark, King George VI and his family, including a 14 year-old Princess Elizabeth, are informed by guards that German parachuters have landed on palace grounds with the apparent intention of kidnapping the royal family in order to force a British surrender.

It’s at this moment that the royals suddenly find themselves in the midst of Operation Rocking Horse; the top secret plan to slip the monarchy out of London. A team of elite soldiers known as the Coats Mission bundle the disguised royals into specially equipped armoured cars and make for a series of safe houses in the British countryside. Coats Mission members have all solemnly sworn that should their motorcade be intercepted by German invaders, they will mount a last stand until each of them is dead.

This epic flight from Nazi domination will not end until the royals reach their final destination more than 7,600 kilometres away in a remote corner of Victoria, B.C. Most of the world now knows Hatley Castle as a shooting location for the X-Men film series. But for a brief period in the darkest depths of the Second World War there was reason to believe it stood ready to shelter a refugee House of Windsor.

The 40-room estate was built in 1908 by the Dunsmuirs, the same coal baron family that had built Victoria’s Craigdarroch Castle. But where Craigdarroch was a nicer-than-average house, Hatley Castle was a West Coast Xanadu: Ten kilometres of roads, a conservatory stuffed with rare tropical plants, a massive state-of-the-art agricultural operation designed to grow all food on site and a private Chinatown to house the property’s more than 100 gardeners.

But by the 1930s, the increasingly cash-strapped Dunsmuirs decided to sell. In 1939, after a fruitless two years on the Victoria real estate market, the castle was purchased by the Canadian federal government at a rock bottom price of $75,000, about $1.4 million in 2019 dollars.

The stated reason was to establish the property as a naval training facility to complement CFB Esquimalt. However, as Royal Roads University archives manager Jenny Seeman told The Capital, it’s possible the government may have had an ulterior motive.

“There has been some debate about whether the property was purchased by the government with this in mind or whether it was purely to be a naval training establishment,” she said. “Although it isn’t written in any sources that I have seen, it is perfectly possible that [the] King agreed to the use of the Hatley Park site for emergency training ... and at the same time quietly recognized that it was a sound investment for the Canadian government, should they be called upon to house the royal family.”

With a declaration of war only four months away, King George VI had even visited the place personally as part of a spring, 1939 tour of Canada. Notably, the property made such an impression on the monarch that he brought it up two years later during a meeting with Canadian prime minister Mackenzie King.

“At one stage, [the king] asked me about what had become of the Dunsmuir property. I told him of the government having purchased it and of it being used for naval purposes. I could see what he had in mind was the possibility of making a sort of Canadian residence for the King,” wrote King in his diary on August 30, 1941.

It wouldn’t have been out of character for the Canadian government of 1939 to clandestinely line up a backup palace for their head of state. Throughout 1939 and 1940, Canada was in the midst of a massive secret operation designed to prepare Canada as a kind of surrogate Britain in the event of invasion. Only a few weeks after the Dunkirk evacuation, Britain would secretly send all its gold reserves across the Atlantic to be stored underneath the Sun Life Building in Montreal. It was a Canadian, William Stephenson, who spent these months busily building up a North American network of espionage and covert operations designed to strike at Germany no matter the ultimate fate of the British homeland.

The vast, rolling grounds of Hatley Castle now conceal a royal adolescence that might have been. The future Queen Elizabeth II would have come of age in a Victoria that, although remote from Nazi domination, was not spared the shadow of war. Throughout the war, Victoria was subject to blackout conditions to protect the city against Japanese air attack. Residents trained in gas attack drills, and helmeted Air Raid Wardens patrolled the streets.

Hatley Castle could also have become a point of contention between an exiled British government and a still-neutral United States. This was an era where the United States still kept detailed invasion plans against Canada just in case, and there is evidence to suggest that they would not have been comfortable with a British monarch setting up his throne only a few dozen kilometres from American soil. A wartime diary entry by Winston Churchill’s private secretary John Colville hinted at some discontent on the part of President Roosevelt who told the British Ambassador that while the British could continue the war from Canada, the head of government would be better off in the British territory of Bermuda, far off the Atlantic coast.

“The American republic would dislike the idea of monarchy functioning on the American Continent!” noted historian Andrew Roberts in his book The Storm of War.

Whether the Americans let them stay in Victoria or not, the Windsors would have been only one among nearly a dozen European royal families sent packing by the war. London, in fact, hosted eight different governments and royal families in exile during the war. Should Operation Sea Lion have succeeded, George’s defiant speeches, famously dramatized by the film The King’s Speech, would have been made to a conquered Great Britain. This was the fate of King Haakon VII of Norway. After refusing to negotiate a surrender following his country’s swift invasion by Germany, Haakon fled to London where he would spend the rest of the war broadcasting messages of resistance to his occupied subjects.

Publicly, King George VI always maintained that he had no plans to abandon his people in the midst of war. As his wife, the woman who would later be known as e Queen Mother would say during the height of the Blitz, “the princesses cannot go without me. I cannot go without the king. And the king will never leave.” Had German troops actually managed to establish a beachhead on British soil, however, it’s unlikely George would have stayed behind to give Nazi Germany the propaganda coup of seizing the head of the British Empire.

Elizabeth’s time at Hatley Castle could have been very much like that of another royal refugee to Canada, the future Queen Beatrix of the Netherlands. Beatrix was only a toddler when the Dutch royal family joined a convoy of ships fleeing to Great Britain; on the voyage the young princess was never kept far from a gas-proof box into which she was to be thrown in case of chemical attack. When Nazi bombers eventually followed the family across the Channel, Beatrix and her family were relocated to Ottawa, where they spent much of the war at Stornoway, now the official residence of the leader of the Official Opposition.

As Beatrix’s country was subjected to famine, forced labour and the deportation of Jewish families including that of Anne Frank, she enjoyed a relatively normal childhood in the quiet Canadian capital. Sent to a conventional public school, classmates knew her as “Trixie Orange,” her last name being a reference to the Dutch Royal House of Orange-Nassau.

Had Britain succumbed to the same fate as the Netherlands, it would have been from Hatley Castle that the family of King George VI would have likely witnessed the humiliating spectacle of a Nazi-approved monarch installed in their place. Since abdicating the throne in 1936, George’s brother, the former King Edward VIII, had become uncomfortably close to Germany’s new fascist regime. As would be revealed after the war, the Germans fully intended to install Edward as the puppet ruler of a Nazi Great Britain. It’s from the echoing halls of Hatley Castle that King George VI would have paced as news trickled out of the horrors that Nazi Germany was imposing on an occupied Britain: Mass imprisonments of suspected dissidents and the extension of the Holocaust across the English Channel.

Postwar Victoria would end up seeing lots of Queen Elizabeth II. The young princess toured the B.C. capital only six years after the German surrender, and would return as Queen in 1959, 1971, 1983, 1987, 1994 and 2002. However, the Queen would never seem to have any particular feelings for Victoria. The B.C. capital was often the last stop on Canadian royal tours, meaning Victorians usually got a Queen who was fatigued and hollow-eyed after weeks of shaking hands across three and a half time zones. "Flashbulbs startle tired, nervous Queen," reads one typical headline from a 1959 visit.

In 1940, Great Britain held back the Nazi tide, its cabinet rejected the easy path of surrender and it would ultimately be a great credit to the course of 20th century history that Princess Elizabeth came of age in a world in which Victoria, B.C. would be nothing more than yet another requisite stopover in an endless series of Commonwealth tours.