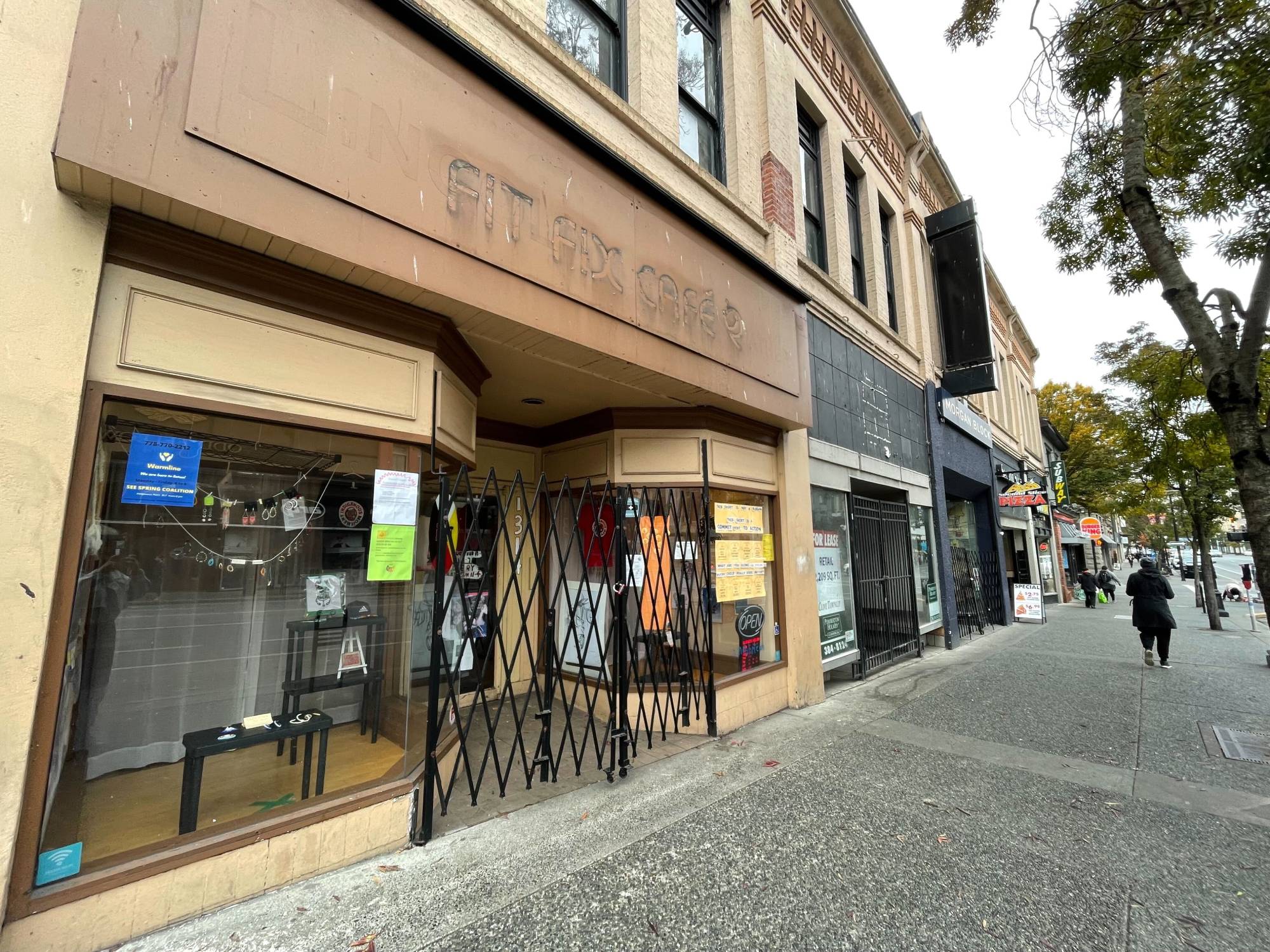 On National Truth and Reconciliation Day, a staff member at the Indigenous Harm Reduction Team (IHRT) was frantically running up and down the sidewalk on Douglas Street imploring passersby for help.

A man had parked his van outside the office/gallery on Douglas Street and was blaring tapes from a speaker within it. These tapes, according to staff members at IHRT, denied the existence of unmarked graves found at residential schools in BC and spewed other racist rhetoric minimizing the harms caused by these institutions.

“It was so loud, you could hear it from all the way back here,” said Avery, an IHRT staff member who declined to share their last name, standing in a back room of the downtown office far from the entrance. “And it was intentionally directed at us.”

The employees politely requested him to stop playing the tapes, but to no avail. Instead, they said, the man got out of his van and stood four doors away from the IHRT entrance, but continued to play the tapes on the speaker in his van using a remote.

IHRT staff spent the next hour seeking out bystanders who could help witness the incident and hopefully get the man to leave.

“We tried asking so many settlers that were walking past in orange shirts to help, because our clients are very vulnerable—they’re the most vulnerable you get, usually homeless, drug users that are, of course, Indigenous,” Avery said. “All of us have experienced some form of traumatization, whether it’s being a descendent or having loved ones that survived residential schools.”

At one point, employees put out two large white boards on the sidewalk with the words, “Please help, this white supremacist is harassing us,” written on them. Still, only two orange-clad pedestrians heeded these requests and offered support.

Others, according to Avery, fended off the IHRT staff, saying they couldn’t get involved because they were walking their dog, or headed to work.

What staff and Indigenous clients at IHRT were hoping for, as they fought off tears and dealt with their own retraumatization, was community support in the form of bystander intervention—allies, ostensibly wearing orange shirts in a display of solidarity with Indigenous Peoples, willing to stand up and call out racism.

“It's a powerful role in that serving as a bystander really signals that there's collective action, and there is strength in community,” said Emily Haigh, who is Anishinaabe-Métis from the Robinson Huron Treaty Territory and UVic’s inaugural Chief Mungo Martin Research Chair in Indigenous mental health.

“It drives individuals out of the margin, centers them…and communicates that they belong, they deserve to be respected and safe.”

But finding little support on the street, the group posted on Facebook asking allies for help. Soon, Avery said, there was a crowd of around 15 people gathered outside the inconspicuous store.

As things got heated, the man allegedly started getting violent. One young woman, who asked to remain unnamed, said he punched her in the face after she told him to leave.

“When I was trying to get him off her, he started hitting me in the process,” Avery said. “He was basically being like, ‘What about white people, we matter too.’ That was his whole argument, that Orange Shirt day is saying that church is bad and…all the blame should go on churches.”

All in all, IHRT staff say that the man physically assaulted four or five people, before someone called the police. For a harm reduction service facility specifically for Indigenous people, calling the cops was the last option, according to Avery.

“There's a lot of violence against Indigenous people from the police,” they said. “There's been two or three shootings in the last couple of years [where] Indigenous people have been killed in Canada.” Research shows that number is much higher. A CTV News analysis found that between 2017 and 2020, at least 25 Indigenous people were shot and killed by a police officer in Canada.

The outcome on this day in Victoria was far different.

“The cops were actually on our side this time,” Avery said. “They came and handcuffed him, because there [were] so many people and so many videos to witness him attacking people.”

The Victoria Police Department did not respond to Capital Daily’s requests for more information about the alleged assaults and arrest, nor had they issued a news release informing the public about this incident when it occurred.

Team members at IHRT are used to racist encounters with people who enter their store, but say this was the first in which they were targeted in such a public display of hate.

“It was a very emotional, almost frightening moment because of the lack of control,” Avery said. “We could feel the hate crime happening right in front of our space, scaring clients away, shaming us on such a vulnerable day.”

In the aftermath of the incident, Avery said the group invited an Elder to host a healing circle for those who needed one.

The space at 1314 Douglas St. is staffed by a small rotating team of around nine people and is meant for Indigenous people who use substances and/or are unhoused to gather. Alongside Naloxone kits and other harm reduction supplies, the two-room office houses an art section with materials that clients use to make paintings, jewelry, and other crafts that are sold in their window.

After Sept. 30, the team made another addition to their storefront: a sign asking settlers who don orange t-shirts what they are doing to “ensure every child really does matter.”

“If you’re going to wear the orange shirt, what that means is you’re willing to do the work to make sure that harm doesn’t get caused,” Avery said. “When you wear that shirt and you come out and don’t take the action that Indigenous people are asking you to do, don’t wear the orange shirt next year.”