October 18, 2022
Get the news and events in Victoria, in your inbox every morning.
Thank you! Your submission has been received!
Oops! Something went wrong while submitting the form. 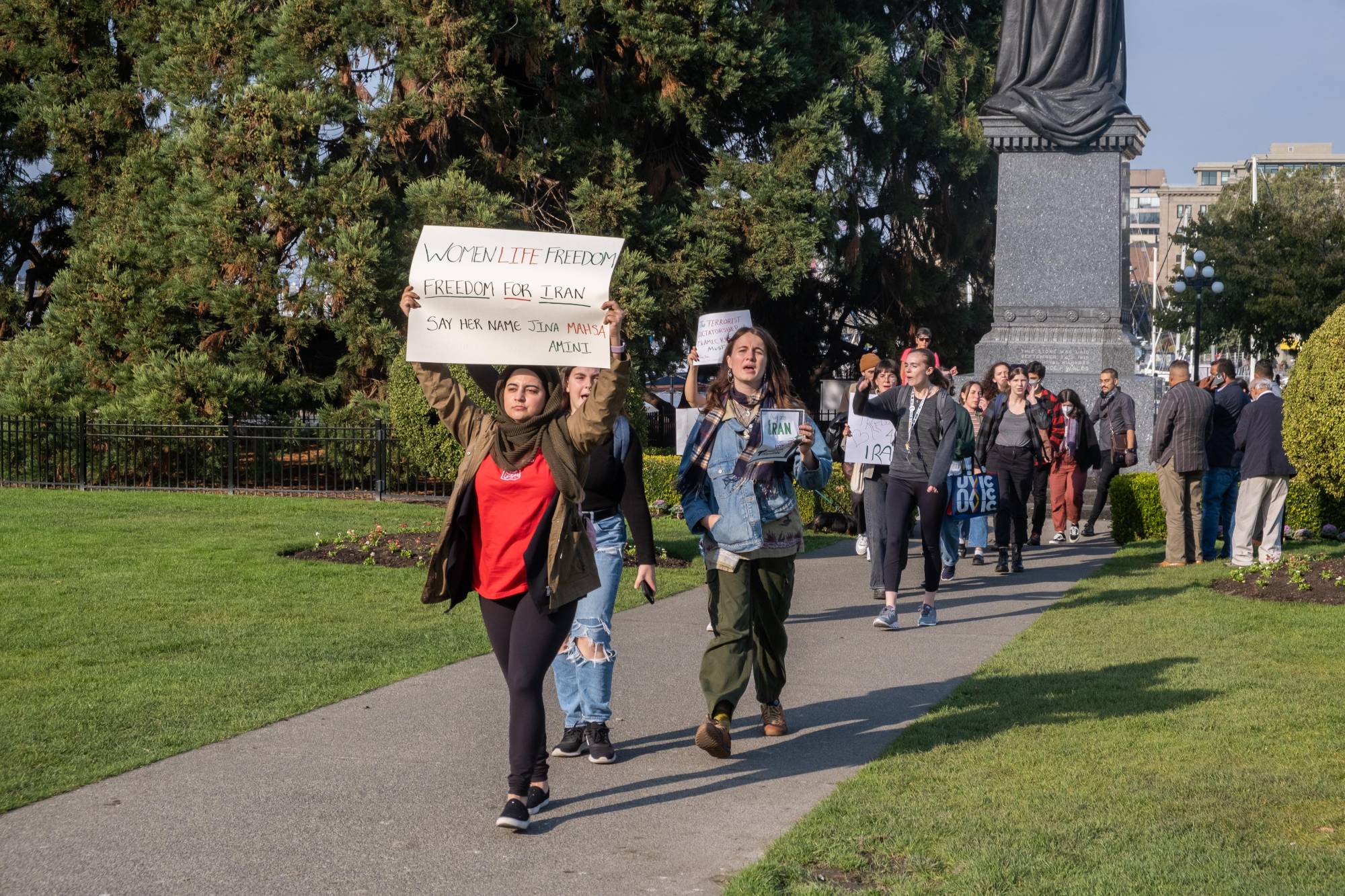 Amid chants of Jin, Jiyan, Azadi—Woman, Life, Freedom—an international feminist slogan that has come to be a rallying cry for Iranian protestors—rally speakers in front of Victoria’s Parliament buildings called for regime change in Iran. The country is in the midst of mass protests, sparked by the deaths of young Iranian women amidst a crackdown on women’s freedom in the country.

“We are not free here when the streets of Iran are painted with the blood of our brothers and sisters,” speaker Kimia Mirzaim said. “We have lost way too many people already and enough is enough. Stand up for justice and be their voice.

“Say her name,” she shouted. More than 100 voices chanted back, “Mahsa Amini!”

Post-secondary students walked out of classes and gathered in front of the Parliament buildings for an afternoon rally in solidarity with the Iranian protests. The students walking out at UVic and Camosun are just two among two dozen walkouts that happened on Oct. 17 across North America and Europe, after Middle East Matters, a youth-run nonprofit based in the United States, called for students across the world to act in solidarity with students in Iran and Afghanistan.

The rally began with Shervin Hajipour's song, “Baraye,” which has become a protest anthem in Iran. Hajipour, a well-known singer in Iran, was arrested by Iranian authorities for the song, whose lyrics are composed of tweets from Iranians expressing why they are protesting.

Attendees were invited to part with a lock of their hair that would be sent to Iranian officials at the United Nation, part of a campaign called You’ve Got Mail Iran.

“Hair is politicized in Iran,” said rally co-organizer Yasaman, who asked to be referred only by her first name. “Iran is one of two countries in the world that has mandatory hijab laws, and it’s used as a means to oppress and instate control over women.”

“By cutting our hair, it’s sending a message that we are not okay with the current status quo,” Yasaman said.

Jina Mahsa Amini’s death on Sept. 16 triggered a wave of discontent that has led to weeks of sustained protests that have not been put down despite a violent crackdown. Amini died in police custody shortly after being arrested, apparently for an infraction of the Islamic dress code.

“Mahsa’s name has become a symbol of resistance for all women of Iran,” Mirzaim said.

“The horrible thing about her death is that it was neither the first or the last crime committed by this regime,” Mirzaei said before she told attendees how her father became a child soldier due to Iranian state propaganda, and watched his friends die around him when he was fighting in the Iran-Iraq war at 13 years old. He deals with the aftereffects to this day, she added.

“All of us have somebody we know who has been imprisoned or mistreated by the regime,” Tahirih Nasseri told Capital Daily before her speech. Like many others in the Iranian diaspora, Nasseri’s family left the country because of the Iranian revolution. She said that she hasn’t been to Iran since she was born due to safety concerns.

Ayatollah Ruhollah Khomeini’s ascent to power in 1979 saw the implementation of a theocratic regime in Iran, where Khomenei ruled as its supreme leader. Ayatollah Ali Khamenei, who succeeded Khomeini 1989, has continued on a similar course, silencing dissent with a combination of overwhelming force and economic handouts to pacify disgruntled citizens.

But this time, the protests haven’t stopped. Iranian authorities have mobilized state agencies in a nationwide campaign to deal with the unrest, besieging universities, cutting internet access across the country, and deploying lethal force against largely unarmed protestors.

While there are no clear leaders in the protest movement, women and youths have been at the forefront at the protests asking for bodily autonomy and equality. Footage of young women burning headscarves and walking bare-headed through the streets in Iran calling for the death of the Iranian republic have been shared across the world.

There have been an estimated two hundred deaths across Iran associated with the protests. The largest massacre happened on Sept. 30, when police killed 82 outside a police station in Zahedan—a city in southeast Iran where the minority Baluch community largely resides. The people who were attacked were demonstrating against a local commander who had allegedly raped a 15-year-old Baluchi girl.

Non-Iranians and non-students showed up outside the Parliament buildings to express their support on Monday. Brenda Bailey, MLA for Vancouver-False Creek, came out of the legislature when she heard the chanting from outside. She spoke briefly in support of the Iranian people. A delegation from Vancouver’s Shri Guru Ravidass Temple visiting the legislature also posed with signs in support.

Speakers at the rally spoke on the difficulty of getting in touch with their friends in Iran, some who are now wanted and on the run for protesting against the government. Nasseri encourages people to participate online by showing their support and spreading information.

“By posting online, we’re actually doing the job of spreading the news that the government is trying to suppress from leaving the country,” Nasseri added.

Nasseri and Mirzaei say that their hope for the future is for Iran to have a government that will promote equality and unity of its peoples, in a way that respects people of all ethnic backgrounds, religious minorities, and religious groups.

A march in downtown Victoria is being planned for this Saturday.

Correction: The first quote in the story was originally incorrectly attributed to Tahirih Nasseri. It was actually spoken by Kimia Mirzaim.