July 20, 2022
Get the news and events in Victoria, in your inbox every morning.
Thank you! Your submission has been received!
Oops! Something went wrong while submitting the form. 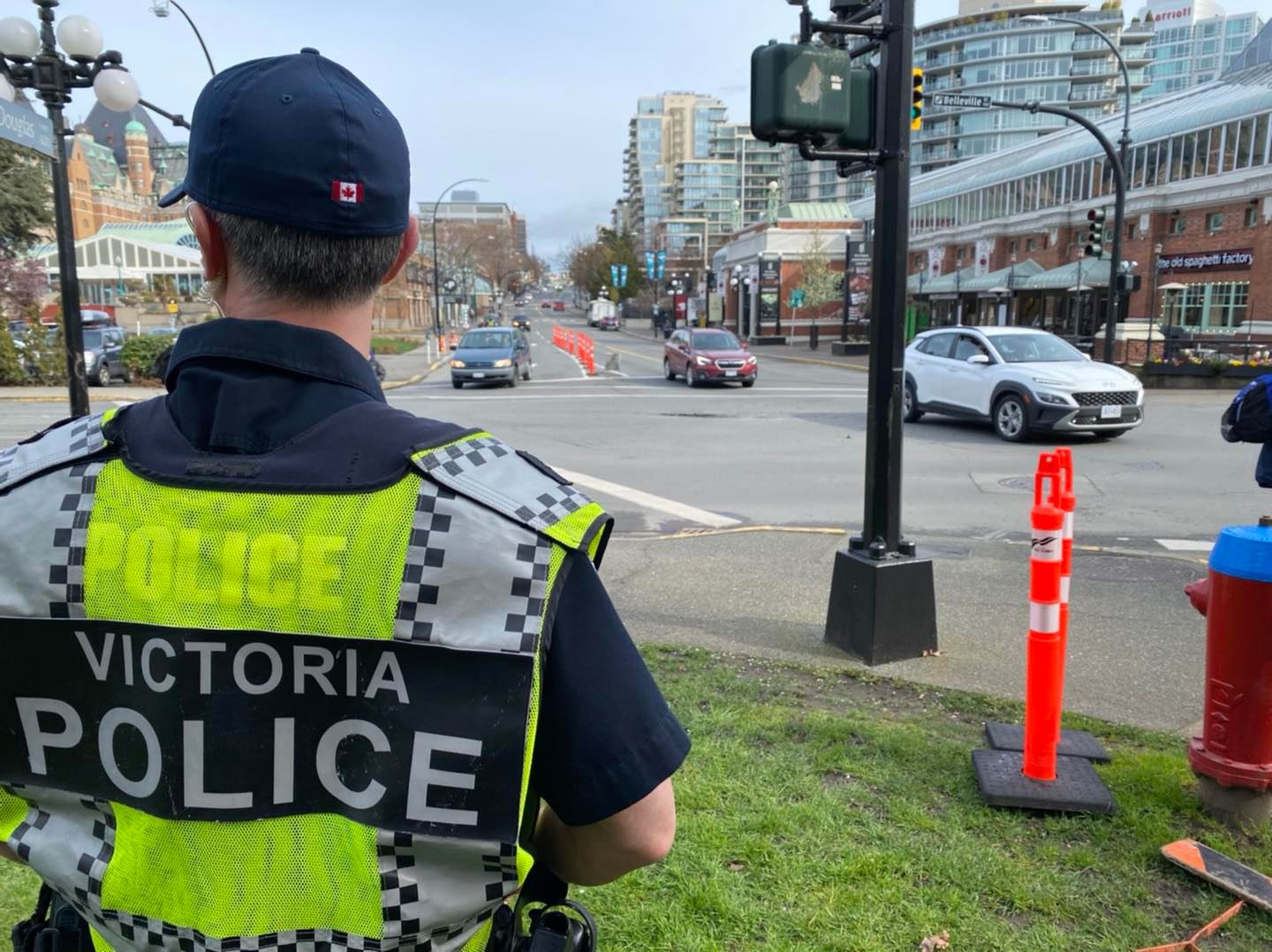 The binding agreement that oversees policing services shared between Victoria and Esquimalt expires this month—and the two municipalities have differing views on how the next amalgamated police budget should look.

Esquimalt council has let it be known it feels the township is paying more than its fair share relative to Victoria, given its lesser use of police services. Victoria mayor Lisa Helps says it’s time for amalgamating police services region-wide.

Both municipalities are looking to address what police have described as a “serious staff shortage” in a department where, as recently as December, a survey found nearly a quarter of officers had symptoms of PTSD.

At the council meeting on July 11, Victoria and Esquimalt Police Board representatives asked Esquimalt council members what their priorities are for policing in the township, as part of their budget 2023 consultation process.

“We’ve got two very different communities with very different needs, and it’s not surprising that the police force focuses on emergent and urgent needs,” said councillor Ken Armour, after Mayor Barb Desjardins discussed the department’s need to respond to urgent crime in the city of Victoria. “So it means that preventive and community policing needs sometimes fall by the wayside, which is what Esquimalt needs and wants.”

After asking councillors about their public-safety priorities, Crowder asked which public-safety activities they’d “consider of lesser importance” should the department have to make “any unfortunate difficult choices in our budget deliberations.” He reminded the councillors of VicPD’s “serious staff shortage” and said that any reduction in police funding would “deepen the staffing deficits” and affect service delivery.

A December 2021 mental-health and well-being study found that nearly a quarter of VicPD officers had symptoms of PTSD and that 52 of the department’s 249 officers were on leave.

A top priority, Mayor Helps told Manak and Crowder, is ensuring that officers have the appropriate wellness and mental-health supports they need to do their jobs. “We hear way too much about officer shortages,” she said, referencing bylaw officers who are overworked because of VicPD shortages and VicPD officers who are called in for overtime on their days off. “You need to figure out a staffing model that even if there are 20 people off with injuries or 30 people off with injuries, we still have 249 people there,” she said. “If the sworn strength is 249, then that should be the number of officers that are deployable on any given day.”

Councillor Sarah Potts also zeroed in on the importance of officer wellbeing. She recommended that the department contract with a mental-health specialist and do more to support officers and civilian staff who are on leave.

Other councillors expressed a desire for the department to focus on serious criminal code violations, community policing, traffic safety, bicycle theft, and disorder in the downtown core.

Councillor Stephen Andrew told an anecdote about a brazen shoplifter who quipped, mid-crime, that the police wouldn’t bother to respond. “We need to change that perception,” Andrew said. Andrew also counted among his top priorities a stand-alone Victoria Police Department, though he acknowledged the question was a political one. (Both Desjardins and Helps have called for an amalgamated force for the entire Capital Region, while the province has urged further integration, rather than division, of police forces.)

We wrote about the PACT team last August. Read about it here.

Who foots the bill for core policing is again at issue

The breakdown of policing responsibility has long been a point of contention between Victoria and Esquimalt, particularly in recent years as VicPD has requested large annual budget increases from the two municipalities. (The department requested a budget of $63.4 million in 2022, up from $59.2 million in the 2021 budget.)

Victoria-Esquimalt has one of the highest police budgets in Canada for its population size, and spends more proportionally on policing than Vancouver, Toronto, Calgary, Ottawa, Montreal, Quebec City, or Halifax.

In March, Mayor Desjardins pointed to costs borne by the department that are not related to Esquimalt, such as increased overtime for downtown protests and preemptive checkpoints.

“Esquimalt should not be the only municipality in the region contributing to these costs,” she wrote in a release, “simply because VicPD provides policing in our township.”

In April, Mayor Helps said it’s time to move toward a regionalized police service in Greater Victoria—one that moves beyond Victoria and Esquimalt to neighbouring municipalities. She’s hoping a new all-party MLAs report, which recommends replacing the RCMP with a provincial police service and creating regional departments across BC, will spur the change to happen sooner.

The spring discussion around police spending came as the department requested a $4.2-million increase in its budget from 2021. (It also coincided with findings that violent crime is dropping in Victoria.)

VicPD had proposed adding 10 new positions, including four civilian positions, two mental health officers, two additional officers to partner with Island Health, a cybercrime sergeant, and a cultural liaison officer—roles Manak said were part of “the minimum budget required to provide adequate and effective policing for the City of Victoria and the Township of Esquimalt.”

Esquimalt rejected VicPD’s application for more civilian and sworn officer staff, except for requested funding for restorative justice. Victoria council had approved the budget increase at the beginning of February, but the proposed budget must be approved by both Victoria and Esquimalt councils, per the current Police Framework Agreement shared by the two municipalities.

The township cited a 2020 provincial review that found, with its declining calls and low crime rates, Esquimalt was overpaying for policing relative to its actual use of those services. More than a fifth of Esquimalt’s budget goes to policing, while VicPD accounts for nearly a quarter of Victoria’s budget.

In March, Manak cited staffing shortages as an ongoing problem, and denied that the 10 new positions requested were supplementary to base policing needs—instead calling them “an essential component of the overall core budget request for VicPD.”

The department has found itself understaffed due to physical and psychological injuries, illness, and parental or other leave.

A staff survey last fall found that most believed the department did not value members’ mental health, provide adequate mental health and wellness supports, or have a culture that made them comfortable disclosing mental health issues. The survey said that for some officers, internal work dynamics affected mental health more than experiences out in the field, and that most respondents described the workplace negatively (using words like “toxic” and “micromanaged”) and perceived a disconnect with senior management. Staff also perceived a lack of support from the union and from municipal councils, while officers had high levels of emotional exhaustion.

At a board meeting on July 19, Inspector James McRae told Victoria and Esquimalt Police Board members that the department expects to have 22 new police recruits ready for service by November.

With files from Cam Welch and Martin Bauman