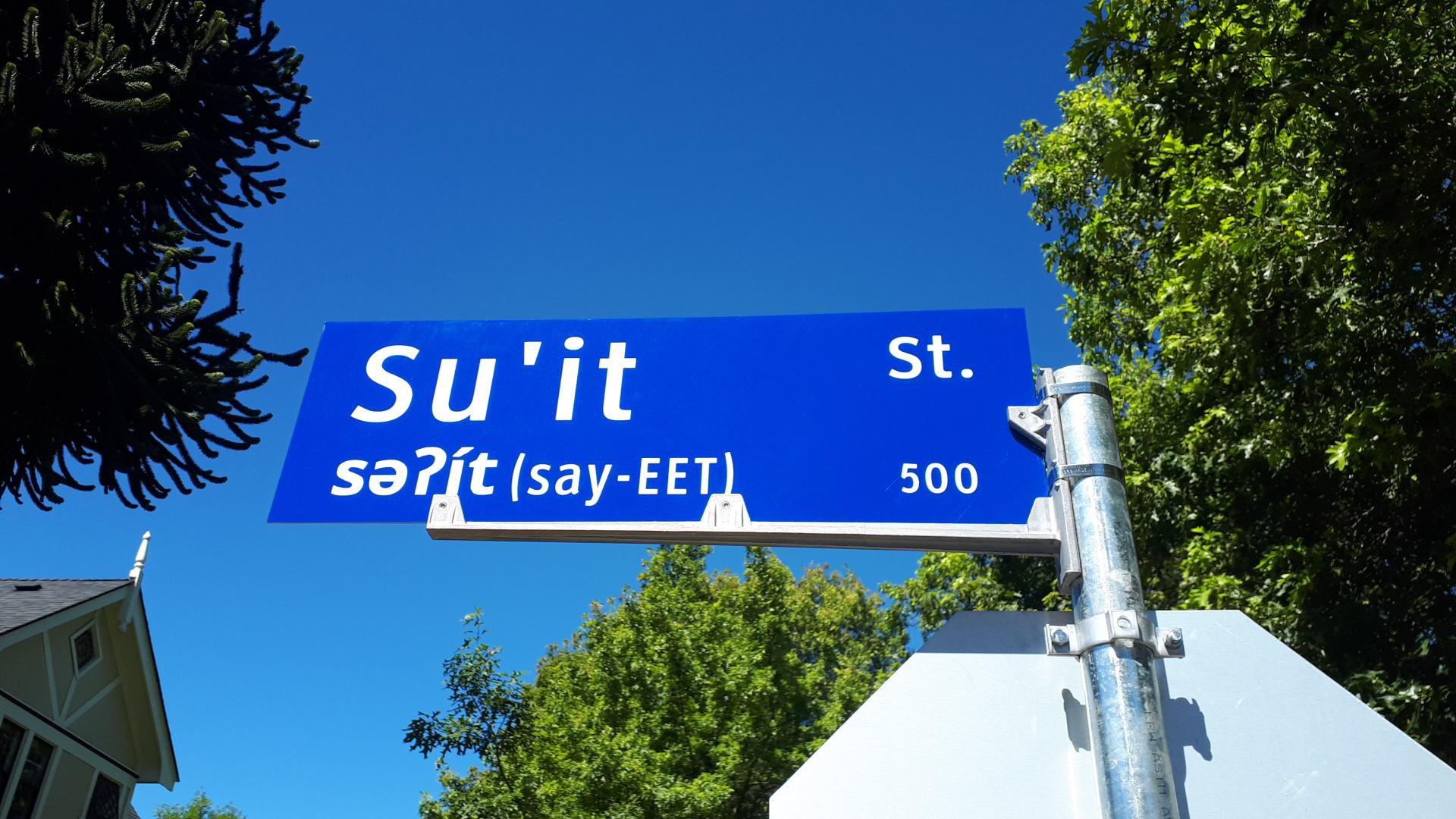 The Sunday ceremony was attended by about 130 people including Victoria councillors and staff; Esquimalt and Songhees representatives, elders, and members; and street residents. A ceremony was held blessing the new endeavor, and representatives gave remarks thanking the other parties for their help in the four-year process.

Songhees Chief Ron Sam highlighted the Elders in attendance and thanked the UVic students who initially pushed for a change to the Trutch residence building, saying they had the courage to make change. Victoria Mayor Lisa Helps thanked the nations, saying that although the City of Victoria made the official change it is only a very recent government on the lands. Helps also said it was a “humbling” experience to go ask for a new name from Lekwungen language keeper Elder Elmer Seniemten George.

George was seated next to the new street sign when it was unveiled. He, in consultation with a linguist, chose Su’it as the new name after considering other options suchs as references to the local geographical features. Victoria’s initial proposal was for the “Trutch” to be modified to the English word “Truth,” but the nations and some street residents felt a Lekwungen word would be most appropriate.

There remain some further changes to be made over the coming months, such as removing the sidewalk tiles spelling Trutch and changing addresses and signs.

A lasting legacy of harm

Joseph Trutch (1826-1904) had perhaps the most substantial negative impact on First Nations of any one BC politician. As the chief commissioner of lands and works, he significantly reduced the size of First Nations' reserves, contrary to prior agreements. He misrepresented or ignored agreements made by James Douglas, and removed the Douglas policy of allowing Indigenous families to homestead plots as settler families could. He did not sign land transfer deals because he believed the nations had no rights to the land.

In the Fraser Valley alone, he removed land now worth hundreds of millions from the Stó:lō. Efforts to get it back were stymied by Trutch, and later the policies that outlived him.

Trutch also held a personal antipathy toward Indigenous peoples and expressed views that were notably racist even among his peers.

He was a delegate in confederation dealings, influencing Canadian policy on Indigenous land in the process, and was later appointed by Canada as BC’s first lieutenant governor. Trutch, and later his family members, lived on the street That came to bear his name.

Name change was several years in the making

The name change was set in motion several years ago. Following the removal of Trutch’s name from a UVic building in 2017, city council held a public hearing on whether to remove it from the street. Last year, university students petitioned city council to revisit the issue, saying Trutch Street remained a “symbol of cultural genocide.” Almost exactly a year ago, Vancouver council passed a motion to rename its own Trutch Street to a title of the Musqueam Nation's choosing.

Steve Sxwithul'txw, a filmmaker and residential school survivor from the Penelakut Tribe, spoke at a community meeting in 2018 about the street’s renaming.

He calls the renaming a “good start,” adding he hopes to see the city continue to recognize the importance of Indigenous history.

“Names are a big part of our society,” he told Capital Daily. “We get named; we go through the rigours of that ceremony. So for the Lekwungen [people] to come up with that name and reference to ‘truth,’ I think they’re really saying something to the city.”

A small step that reframes relationship to place's history

The name change comes at a time of reckoning within Victoria, and across Canada. On July 1, 2021, protestors toppled a statue of James Cook in the Inner Harbour. Three years earlier, city council removed a statue of Sir John A. MacDonald from outside City Hall.

“There's this narrative when we change street names and take down statues that we’re erasing history, but I think it's the exact opposite,” Mayor Lisa Helps told Capital Daily. “For me… it's actually telling British Columbia's history, but from a more Indigenous point of view.”

Council’s vote in favour of the change from Trutch to Su’it was unanimous. “I think if we’re serious about reconciliation and respectful relations between Indigenous peoples and the settler governments, this modest step is one worth taking,” Councillor Ben Isitt said.

In a written statement sent to Capital Daily, the Songhees Chief and Council said they’re “pleased” to be part of the street’s renaming.

“By memorializing historical figures who were known racists, we allow their influence to live on,” the Nation added. “With the renaming of this road, the Lekwungen people are not only able to share our native language, but also decolonize a chapter of local history. We will continue to work with the City of Victoria to change the narrative on historical figures, and towards a partnership reflective of truth and reconciliation.”