November 5, 2022
Get the news and events in Victoria, in your inbox every morning.
Thank you! Your submission has been received!
Oops! Something went wrong while submitting the form. 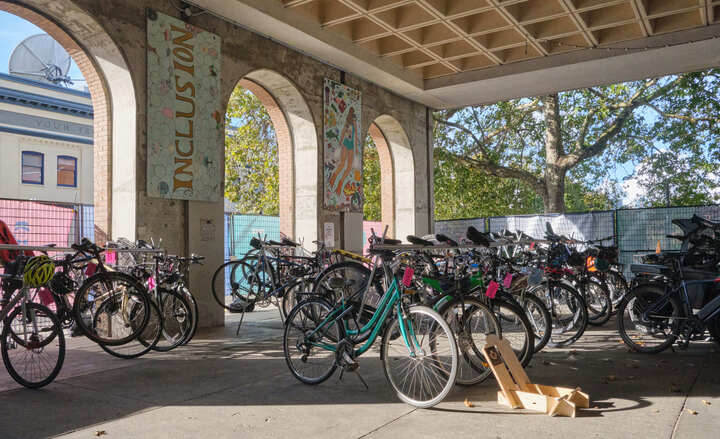 Victoria’s bike valet service will shut down for the winter Sunday,  but don’t fret if you haven’t had a chance to use the free service off Pandora Street: It’s coming back next year, with extended operating months.

“We’re targeting March,” said Sarah Webb, city manager of sustainable transportation planning and development. Once it opens in 2023, the valet is expected to run until December.

The coat check-style valet service for bikes and other active transportation tools launched in June and has been “an overwhelming success,” said Webb, who said the pilot program stored 11,000 bikes over the past five months.

Victoria will be continuing its partnership with Capital Bike and the Vancouver-based BEST (Better Environmentally Sound Transportation) to deliver the service in 2023, though there isn’t a finalized price tag yet as the three parties are still in negotiations, Webb said.

The budget for this year’s pilot was $146,000, earmarked from the $500,000 in federal funding the City received for initiatives to improve secure bike parking in Victoria, including the valet.

While some—such as new Victoria councillor Matt Dell—are hoping to see the service continue throughout the year, valet attendants will need more support to get through the winter months.

“The winter is a bit of a logistic [issue] right now, because we’re not really set up to go through all the weather and the cold,” said Donna Stokes, a bike valet attendant. There’s only a small portable electric heater underneath the folding table for warmth.

Malcolm Jefferson bikes in from Sidney three or four times a week and is a regular user of the valet. Previously, he locked up in the Yates street parkade.

But people have still tried to steal his bike there despite the parkade having a security attendant, said Jefferson. No such experience at the bike valet.

Jefferson, who has been cycling instead of driving for the past three years after a car accident shattered his ankle, said he would use the service through the winter if he had the option.

That’s not to say that there hasn’t been any opposition. Bike valet attendant Jim Moffatt remembers pushback from people unhappy about the service when it first launched.

“We used to get a lot of people saying, ‘who’s paying for this?’” he continued. “They went online and put in their negative comments, and just got so many positive comments. They kind of gave up.”

“I call them C.A.V.E. people,” said Moffatt. “Citizens against virtually everything.”

Members of the street community who had often gathered in the sheltered area now taken over by the valet were also displeased initially, Moffat said.

“We had a couple things stolen off our table, and people were angry because they lost their home, right?” he said.

But over time, the valet became part of the community fabric of Centennial Square, with staff and the area’s regulars speaking on a first-name basis.

“If you don’t see someone for a while, you inquire and make sure everyone’s doing okay,” Stokes said. “You become part of the community.”

Stokes is the “gold standard” of bike valet, said Todd Glover, another bike valet attendant. “She waves to everybody: she waves to the bus. She pets all the dogs.”

Many of the bike valet attendants hired this year came through the outreach efforts of Capital Bikes, a cycling non-profit based in Victoria. There’s a lot of cycling advocates like Glover, who more than 20 years ago, put his kids on bikes to help create a less car-centric Victoria.

He said these days, it’s much easier to bike with children.

“As a city, you have to decide what kind of city you want to be,” Glover said. “The bike valet is a choice the city makes because they want to help create a city where people are on foot and on bikes.”

The City is collecting  feedback on the bike valet program until Nov. 13 via an online survey. More than 1,200 people have already provided comments.