October 19, 2022
Get the news and events in Victoria, in your inbox every morning.
Thank you! Your submission has been received!
Oops! Something went wrong while submitting the form. 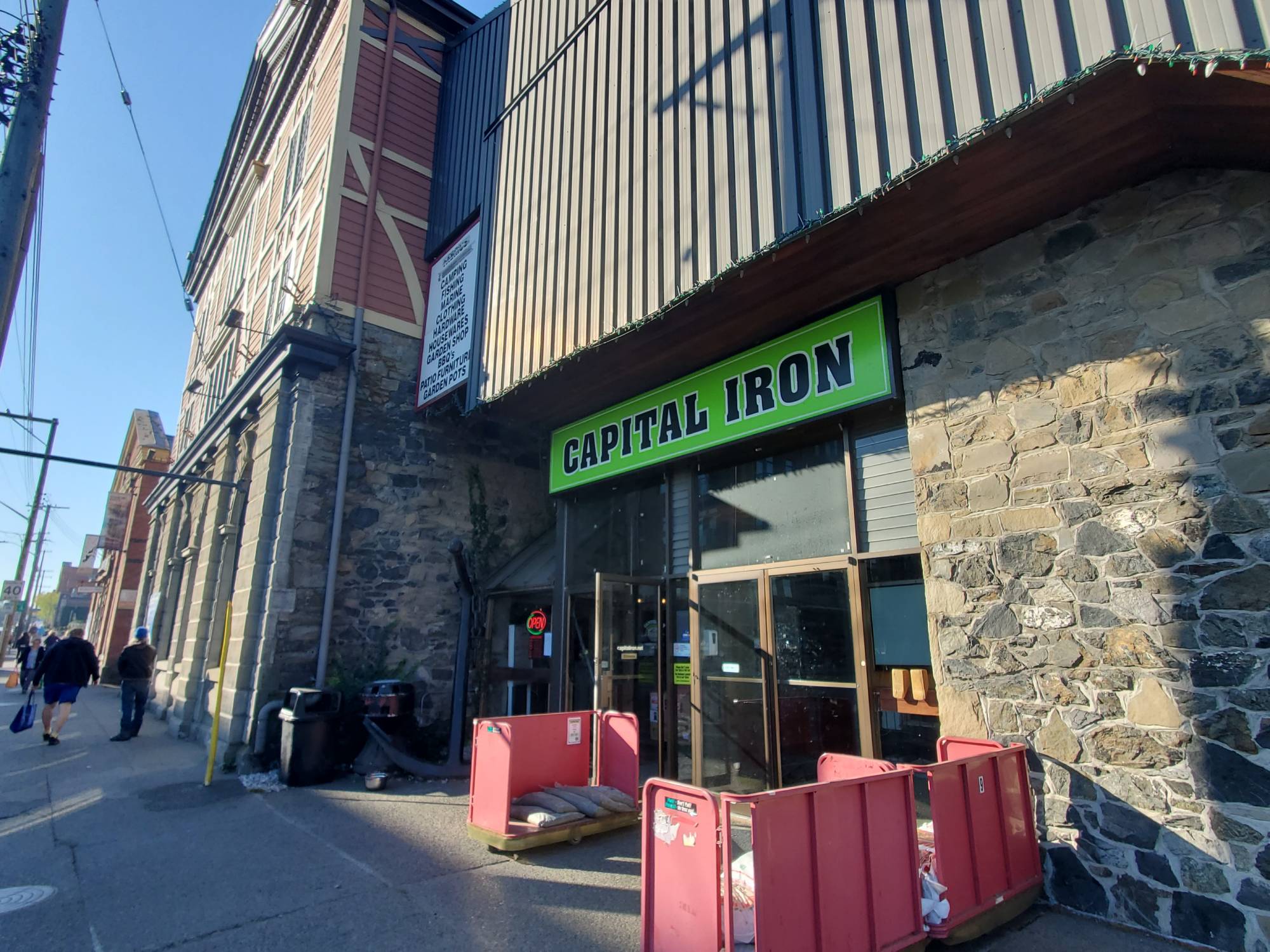 Longstanding Store Street landmark Capital Iron—where generations of Victoria have shopped for everything from barbecues to shoes to hot tubs—announced last week it would be closing down permanently on Dec. 17, after 88 years.

Though store management did not reply to Capital Daily’s request for comment in time for publication, co-owner Mike Black told the Times Colonist that the business is ultimately closing due to the pressures of the pandemic. But even before COVID-19 hit, the store had seen a decrease in sales as more shoppers turned to big-box stores and online shopping. The closure, which includes the Westshore location, will affect 45 people working at both stores.

The historic Capital Iron building, built in 1863, is at the west end of an area slated for big changes in the coming years. The region in the northwest corner of downtown has been earmarked to become Victoria’s arts and innovation district, as laid out in the Victoria 3.0 plan.

In 2020, Reliance Properties purchased 2.7 hectares of property spanning two blocks from the upper harbour to Government Street, between Discovery and Chatham Streets. While the majority of that area would be completely redeveloped, the three heritage buildings along Store Street, including the Capital Iron building, would remain.

Jon Stovell, Reliance president and CEO, said he was sad to see the iconic local business leave, but it wasn’t a surprise.

“They sold us those buildings a couple of years back, and we thought when they did that, that was pretty much an indication that they were probably going to be winding down,” he said.

When Reliance purchased the buildings, it maintained the existing lease and rental costs with Capital Iron. The company still had a few years remaining on its lease when it announced it would be closing.

As for what could take the place of Capital Iron, Stovell said that is still very much up in the air. Several groups have looked at the buildings in the past few years, but no firm plans have been made, he added.

“We’ve looked at everything from commercial to artists’ studios, to marine-related technology businesses, who would take advantage of the waterfront location,” Stovell said, adding that Reliance has also considered residential uses for the building’s upper levels, but that nothing has been decided yet. “We hadn’t really put too much focus or time into it because as far as we knew, Capital Iron would be staying until we heard otherwise.”

Upon council approval, the company’s first focus will be redeveloping the parking lot in front of the Capital Iron building. Without Capital Iron being housed across the street, Stovell said they will no longer have to worry about replacing that parking during construction, as was their agreement with the business; an underground parkade is planned for that same spot but would not be accessible until after construction is finished.

Reliance is proposing to work with the Art Gallery of Greater Victoria on a new gallery in that lot, as well as live-work space for artists, a new industrial office building, and a plaza. Across the entire seven-acres, Stovell says Reliance would like to see a mix of light industrial, high tech, retail, and arts and culture uses.

The company is currently applying to rezone the area to allow for new uses, height, and density. This application has already gone through the planning and review process and is set to go to Victoria’s Committee of the Whole early next year, where council will decide whether to send it to a public hearing.

Mayor-elect Marianne Alto campaigned in part on the goal of realizing the City of Victoria’s Arts and Innovation District. She told Capital Daily that the city is already incredibly rich in arts and culture, but creating a specific district will help to concentrate and attract those elements.

Alto envisions the area as a place with industrial employment mixed with opportunities for Indigenous economic development and spaces for artists and creators—“the types of people who create that fabric of culture, which is both economically viable and vibrant, but also provides us with the quality of life experiences that really make a city interesting and welcoming.”

Alto said redeveloping this area is going to take years and there is still a lot of work to do on determining the best use of the space. But she calls the redevelopment “a special opportunity” to completely re-envision the area.

“Given the confined nature of the lands of the city of Victoria, we don’t often have areas that are that significant in size and history to look at and think about planning holistically,” she said. “There are components within that that allow there to be some really visionary imagination about what that can look like and how it interacts from land to sea, and how you want to balance the various different uses from residential to industrial, to arts and culture.”

As for the Capital Iron building, now that the business is closing, Alto said there is room for council to have conversations about what the best use could be for the historic building.