Victoria author Wendy Proverbs's tween book captures the pain of distance in the Sixties Scoop
In this September 15 photo, Central Park tenter Fred Mayers talks with a bylaw officer who has requested he removes his tarps (Credit: James MacDonald for Capital Daily).
Homelessness 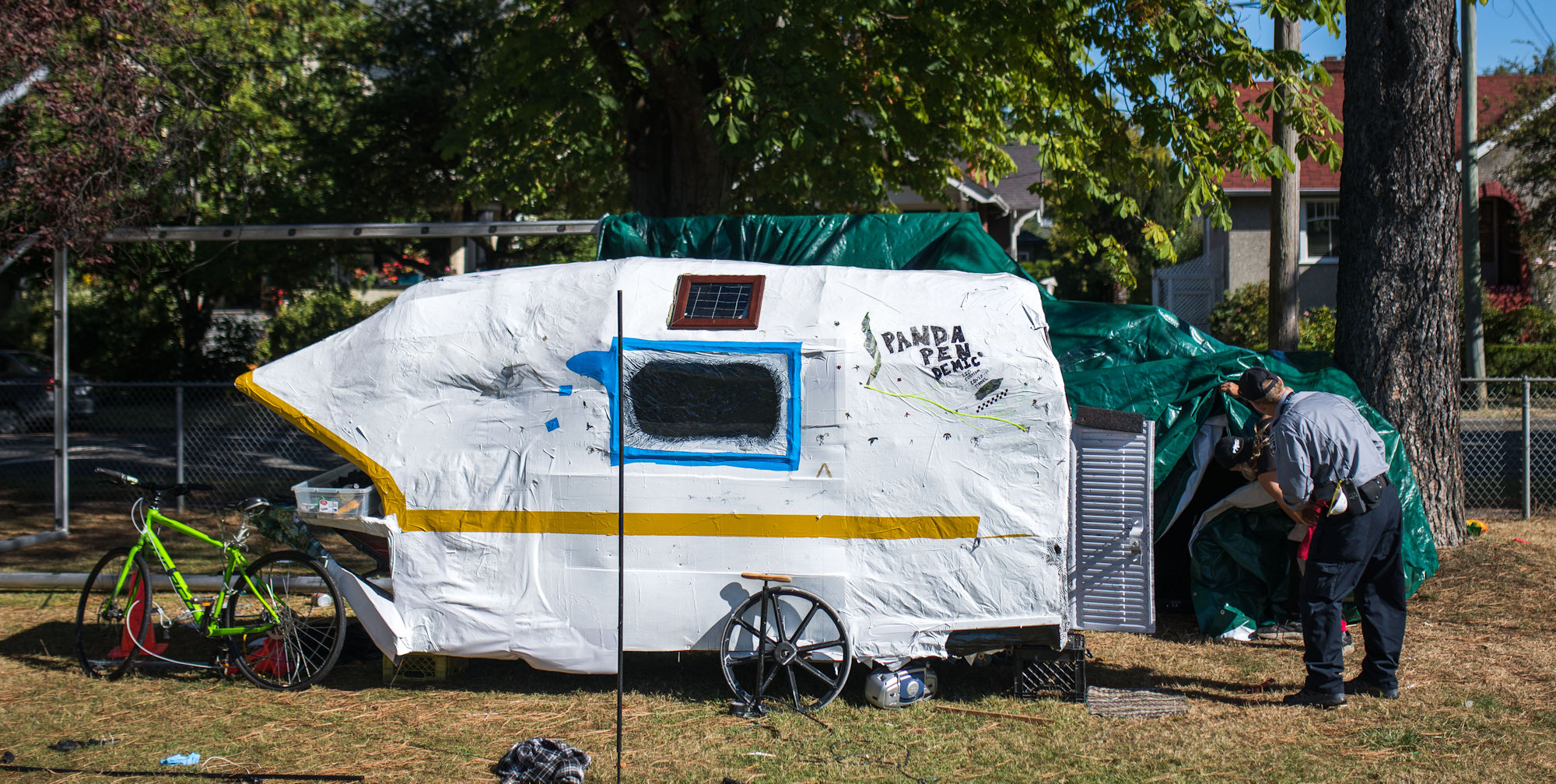 In this September 15 photo, Central Park tenter Fred Mayers talks with a bylaw officer who has requested he removes his tarps (Credit: James MacDonald for Capital Daily).

A month ago, tenters in Centennial Square were given move-out orders by the City of Victoria following a series of stabbings and the busting of an onsite drug ring. Some of the Centennial Square campers had already been evicted from a sanctioned camp at Topaz Park which was dismantled mid-May, also due to high crime rates and disorder. And the Topaz Park site, first established in late March, had been populated with campers evicted from Pandora Avenue, whose medians still remain fenced off.

And now, tents are starting to show up behind Crystal Pool, with 112 as of a Wednesday count by Capital Daily.

Since the COVID-19 pandemic started, around 400 of Victoria’s homeless people have been placed in hotel rooms and other accommodations purchased by BC Housing, including the Comfort Inn (65 rooms) and the former Paul’s Motor Inn (75 rooms). At the latest count, around 275 remain unhoused—due to a multitude of reasons including not enough rooms or people declining shelter.

Beacon Hill Park has attracted the most attention for its tent encampments, but it’s one of only 12 parks featured in a pamphlet that the city is handing out to homeless people with directions on where to camp. Of those, one of the more popular options has become Central Park, behind the Crystal Pool.

“It just kind of happened,” said a Footprints security guard. He was hired by city hall to patrol Central Park the night before the Centennial Square encampment was moved out.

Occupancy in Central Park has exploded since Capital Daily last visited this site on September 15 and counted fewer than than 50 tents. There are also increased facilities including hand washing stations and portable toilets. Several outreach workers and representatives from nonprofit organizations are now present, appearing to work in shifts. Capital Daily approached two outreach workers who declined to be interviewed.

Sandy Fisher, who has lived at camps on Pandora Street, in Beacon Hill, Centennial Square, and now Central Park, is confident that this camp could be the final stop before many are cycled into permanent housing.

“It’s unprecedented … I have established great dialogue with bylaw and police. People are rolling up their sleeves to go to work and find solutions” said Fisher, who has often appeared in court and the media discussing homelessness issues.

Fisher said that it’s just a few tenters (“anarchists”) who fracture relationships with the city and law enforcement.

When Capital Daily visited Central Park on September 15, one tenter recalled a long-standing argument he had with bylaw officers who he claimed had threatened to remove his belongings. So he defecated in his tent, and invited a bylaw officer inside. “You can have my shit,” the man told the officer.

“This is the first time we have seen the unhoused community be involved in the process to address sheltering in parks. However, sheltering in parks should only be viewed as an interim solution,” said Sarah Murray, the executive director of the North Park Neighborhood Association (NPNA).

As a part of that interim solution though, Murray explained that the NPNA are advocating—and have been since June—for an equitable distribution of sheltering in parks across all City of Victoria neighbourhoods.

When asked when this tent community will inevitably be dismantled, Fisher said, “you couldn’t put an end date on it but we are moving toward a solution for each person.”