A final decision on Missing Middle is coming, but not until the new year
Health
Features

April 1, 2022
Get the news and events in Victoria, in your inbox every morning.
Thank you! Your submission has been received!
Oops! Something went wrong while submitting the form. 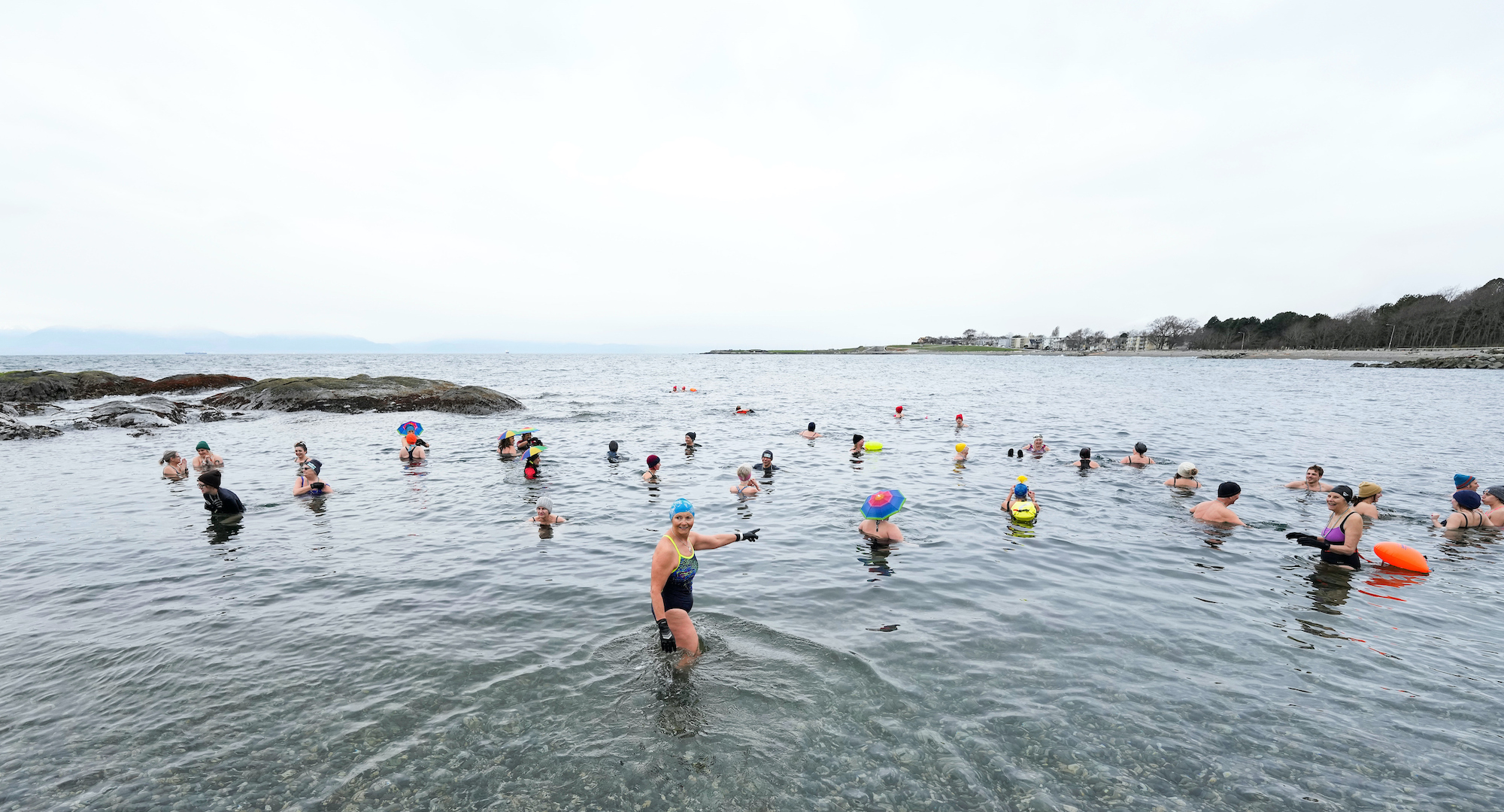 Capital Daily good news coverage is supported by Tiny, but the stories and journalism are produced independently by Capital Daily. Per our policy, Tiny had no editorial input into this story.

The worst part, they tell me, is the dread—the anticipation before you take those first steps from the beach into the icy ocean. At 8:00 am on a Monday in March, the sea lapping against the breakwater is about seven degrees. Rain spatters early morning dog walkers as they pass by above on Dallas Road.

But the first of the Cold Water Addicts have already waded down the shoreline in the shadow of Ogden Point to take their plunge. Most paddle out with only their swimsuits, swim caps, cold-water boots, and tow floats. I opted for leggings and a t-shirt over my swimsuit—a makeshift wetsuit, I figured. A veteran member of the group lends me her boots; another advises me against trying to stay in too long my first time. At their request, we all sport rainbow umbrella hats.

We leave our bags and warm clothes behind, draped over logs on the shoreline. The women around me chat and crack jokes as they lead me to the water’s edge. It feels like I’m about to cliff dive with old friends, not about to step into the ocean with a group of people twice my age whom I’ve just met.

The cold water, they tell me later, plays a role in this.

“It takes you back to being child-like,” said Jan Simmons, who wears a bright blue swim cap and a large smile when I meet her. “Everybody watches out for each other in there, and takes care of each other. I think an aspect of our group is welcoming, inclusive, caring and crazy fun.”

The Cold Water Addicts make this pilgrimage every morning, swimming in the rain, snow, and below-freezing temperatures. In the year since Brian Bolli and his wife Nancy first began this daily ritual, they’ve discovered it’s not just an addiction, but infectious as well. Now, dozens from across Vancouver Island regularly meet up with the Cold Water Addicts for their daily swims or Adventure Sundays at new beaches across the region.

Chapters of “addicts,” as they call themselves, have sprung up on beaches from Sooke to Sidney, for those looking for company on daily dips closer to home. The Cold Water Addicts Facebook group now has more than 250 members, and more than 40 people came to celebrate the group’s 50th Adventure Sunday at Ross Bay Beach on March 20. The festivities also hosted an impromptu fundraiser, where they raised almost $400 for the Canadian-Ukrainian Fund.

“It’s turned into a real community,” Bolli said. “It really astounds me that what started as just three or four people, it just blossomed.”

Nelson Lah organizes the group’s weekly events, which include lectures from guest speakers on Tuesdays. In these sessions, the Cold Water Addicts have learned everything from what currents to expect in their favourite swimming spots, to how to avoid human-made, floating, unsanitary hazards in the ocean, to the benefits of eating seaweed. On Saturdays, they swim with the Spirit Orcas, a group of developmentally disabled adult athletes coached by marathon swimmer Susan Simmons.

Looking out at the misty horizon that morning, it was almost indistinguishable where the sky ended and the Pacific Ocean began. I tried not to picture the sensation of a cold shower nipping at my skin as I neared the water’s edge.

“Does it ever get any easier?” I asked Charmaine Shipley, who swims with the group every day alongside her husband.

“It’s like working out,” she replied. “You never really want to go and work out, but once you start, it’s great.”

I took my first steps into the surf. It wasn’t until I was knee-deep that the cold started to catch up with me. Ahead, Moline and the others cheered me on, so I kept walking.

The first time Simmons built up the courage to walk into the icy waves, she felt something that has pulled her back to the beach nearly every day since.

“As soon as I dropped [under the water] to my shoulders, it was like every muscle in my body relaxed,” she said. “I have never experienced that.”

Simmons, who is in her 70s, has struggled with cognitive decline in recent years. But since she introduced cold-water swims into her daily routine, she says the symptoms’ progression have slowed.

Preliminary studies suggest that "cold-shock" proteins, called RBM3, triggered from cold water swims could be key in slowing neurodegenerative diseases. Simmons isn’t waiting around for science to conclusively prove this, however—she’s out in the sea every morning she can make it.

At home, Simmons has tried to replicate the same experience by sitting in an ice tub. But in these “torture baths,” she hasn’t found the same kind relaxation and joy; instead, she counts down the minutes until she can jump out. She never misses a chance to experience the real thing, and sought out local swimming groups from Campbell River to Nanaimo during trips up Island to visit family.

Moline has seen a similar boost to her heath over the time she’s been swimming with the Cold Water Addicts. She has mobility issues, and although she still brings her two canes with her in case she needs them, she has found herself relying on them less than she once did.

“Every time I go in the water, it’s an anti-inflammatory and it helps me with my walking,” Moline said. “I’m much stronger than I was.”

Thanks to the improvements she’s seen, Moline has cut back half her dose of blood pressure medication, and has reduced her antidepressants. She finds herself laughing more in the goofy, nonjudgmental company of her fellow swimmers.

“I just feel wonderful when I come out,” she said. “I think if I didn't have the support of the group, I'm not sure that I would swim as much as I do.”

In my few minutes in the water alongside Moline, Simmons, and the other Cold Water Addicts, I begin to feel it too. We rock in the waves, laughing and shivering as the salt coats our skin.

“There’s something magical about swimming in the rain and the snow,” Moline said.

They ask me if I want to dunk under, and somehow—if you had asked me when I left my bed that morning, I certainly would have declined—I’m in. It’s okay if I scream, they tell me.

One deep breath in, and I’m under.

Simmons spies a duo of river otters swimming just beyond the furthest of the swimmers as she and I return to the beach. The otters have accepted them as part of the ecosystem on this beach, she tells me.

Some of the others begin to emerge. Although the most well-practiced and warm blooded of the Cold Water Addicts can stay in up to 20 or 30 minutes, many have cut their swims short to join us on the beach.

Bolli has big dreams for this space. He wants to seek permission to install buoys every few hundred metres so swimmers can work towards specific goals for strengthening their swimming. Lah hopes the city will help build stairs down to the water’s edge, to help make the beach more accessible and prevent people from slipping in the rain and snow.

After we change, the next step in this morning ritual is to head to Shoal Point Coffeehouse. It’s only after I down the first sips of my latte that I’m finally able to stop shivering; across from me, Bolli is wearing shorts as he calmly sips his coffee.

The Cold Water Addicts spend over an hour in the coffee shop, telling stories, dreaming about swimming the English Channel, and sharing songs they’ve composed for each other filled with inside jokes.

“This much,” Shipley said, with her hands in a tight gesture, “is a conversation about cold water. The rest is about community.” 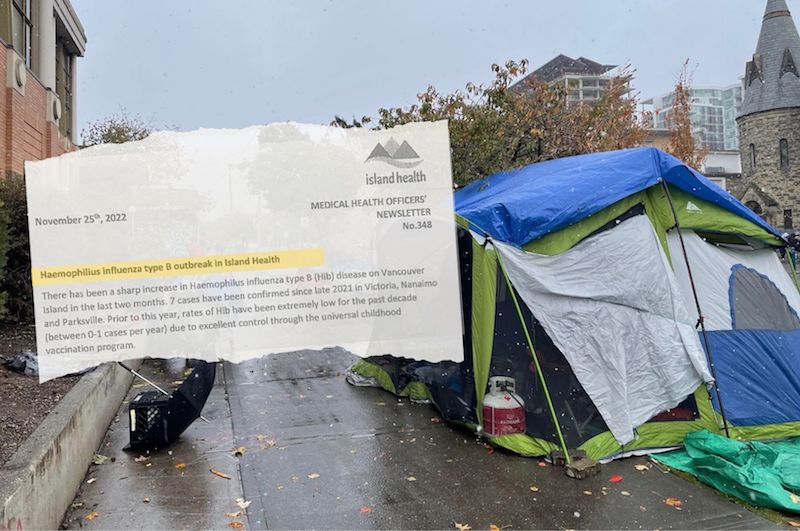 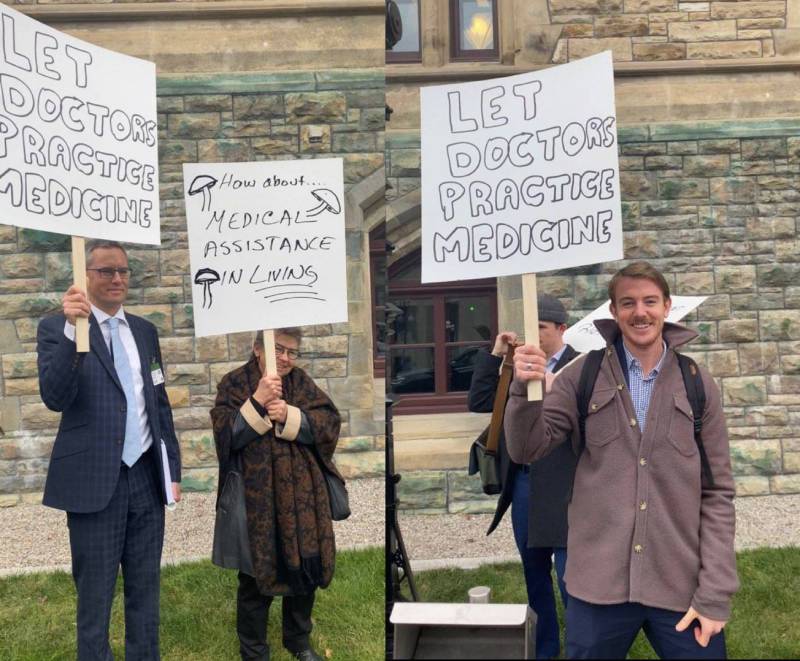