July 21, 2022
Get the news and events in Victoria, in your inbox every morning.
Thank you! Your submission has been received!
Oops! Something went wrong while submitting the form. 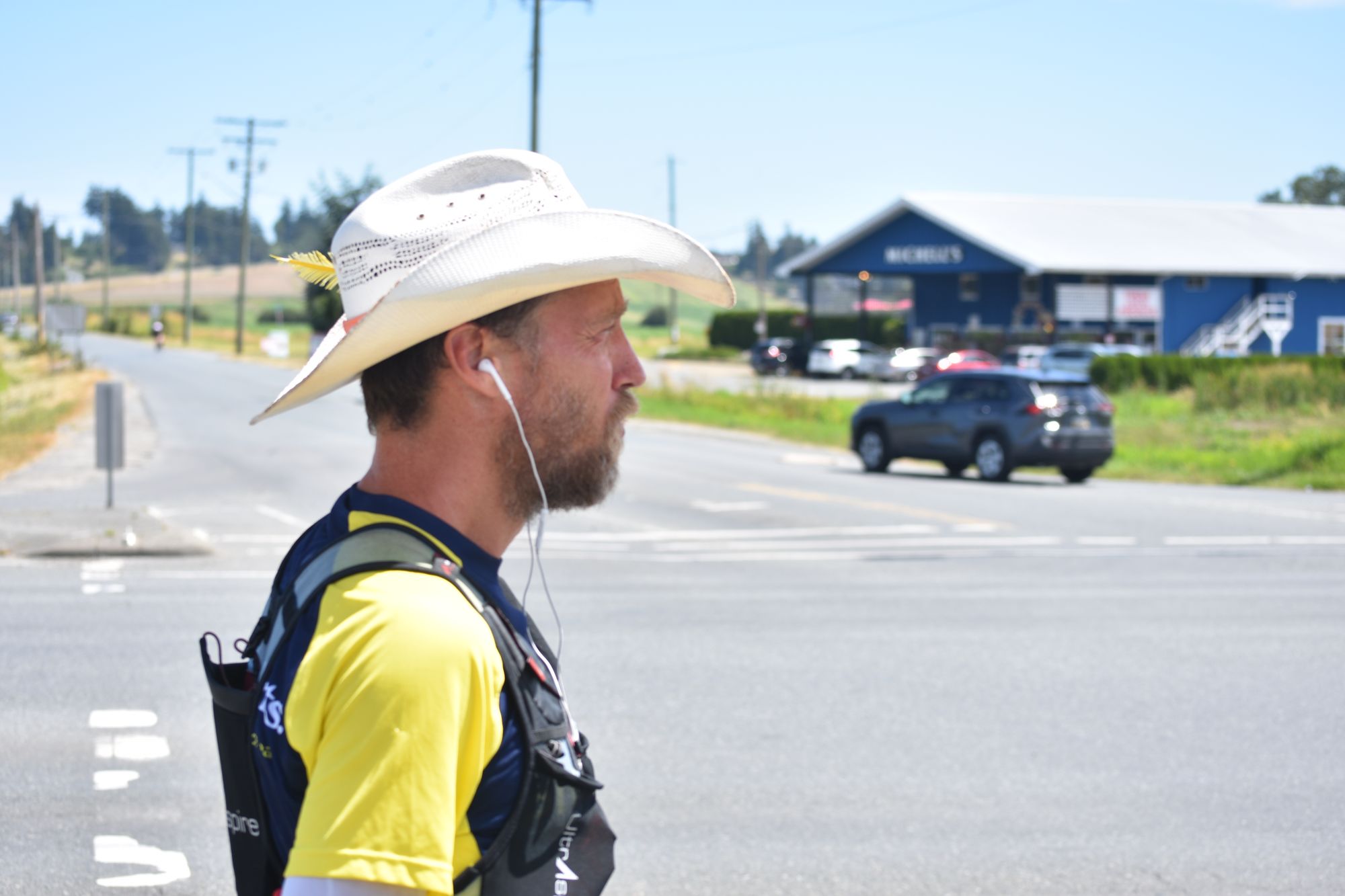 Mid-Thursday afternoon, the Okotoks, AB-based ultramarathoner smashed the all-time speed record for running across Canada when he arrived at Mile Zero on Douglas Street. It was just 67 days after he set off from St. John’s, NL, 7,200 km away.

In arriving at Beacon Hill Park’s southern edge on July 21, where the Terry Fox statue looks out at the Juan de Fuca Strait, Proctor has not only broken a 31-year-old record, but brought it into another stratosphere, finishing five days sooner than Al Howie’s cross-Canada record from 1991.

Running records are something of a collector’s hobby for Proctor—the same way another person might hoard home run balls or stash sand dollars from Dallas Beach. He holds the Canadian road distance records for 24, 48, and 72 hours. (In 2015 in Turin, Italy, he ran 257 km in a single day.) He set the world treadmill record for 100 miles in 2019, finishing in 12 hours.

And the 41-year-old massage therapist isn’t finished, either.

This isn’t Proctor’s first time at Mile Zero—nor his first crack at breaking Howie’s cross-Canada record. He set off from Victoria in 2018, before a herniated disc forced him to stop in Winnipeg. He’d planned to give it another go in 2020, but then the COVID-19 pandemic turned travel into a logistical nightmare.

“I was given ten thousand reasons to quit. And I didn't take one door,” he said.

It wasn’t easy for Proctor this go-round. He smashed his forehead near Thunder Bay, ON in late June after taking a spill on a narrow bridge. Still, he managed to run 105 km in 14 hours that day.

Proctor’s girlfriend and crew lead, Lana Ledene, has been watching over him the whole trip.

“I think to myself every day, ‘He’s not going to be able to run tomorrow.’ And he still does it—it’s just mind-blowing,” she said.

En route to Merritt, Proctor ran 106 km in 13 hours while climbing a total of 1,808 metres—the equivalent of more than three CN Towers stacked atop each other, with room for London’s Big Ben. He’s been through a dozen pairs of shoes, and amassed enough calluses on his feet to make even Frankenstein’s monster wince.

“My toes are pretty gnarly,” he told Capital Daily. “I’ll probably lose a few toenails … I’m certainly not going to be a foot model anytime soon.

“I can’t even begin to tell you how many parts of my body ache,” he added.

Throughout, Proctor managed to keep a pace of 105 km per day—the equivalent of two-and-a-half marathons for 67 days straight—without taking a single rest day. Not that the route could’ve done without more fine-tuning.

“I admit I had a couple of beers when I was [planning] it, because when you’re mapping out the country, you have to numb yourself a little or it scares the living shit out of you,” he told Running Magazine in early July.

Proctor, like Howie, like nearly all other runners who’ve set off from one coast to reach the other in Canada, found inspiration throughout his months-long trek in Port Coquitlam’s Terry Fox.

It was the late Fox’s statue Proctor had in mind when he envisioned an end-point for the cross-country run. He left from St. John’s in May—a few days and a month past where Terry set out 42 years earlier. In Thunder Bay, where Fox ended his historic run on Sep. 1, 1980, sidelined by cancer, Proctor stopped and paid homage. And in Ontario, he even formed an unlikely bond with Fox’s brother, Fred.

“[Terry] taught all of us, every Canadian, what grit and determination are—and that you can really do anything as long as you just try and give it your all,” Proctor told reporters. “It was perfect timing [meeting Fred], because I was really struggling in northern Ontario… and he spoke to me with an amount of grace that I’ve never experienced before.”

What’s next for Proctor

The father of three isn’t finished with ultra-running—not yet. But he isn’t rushing to the next expedition, either.

“There are a number of things that I still want to achieve in my running life,” he said. “I don’t want to be an old man that dies saying, ‘I wish I would have tried harder.’”

His parents—Randy and Nancy—are just glad their son has made it in one piece. His mother’s plan for the remainder of their time in Victoria?

“Hugging the shit out of him.”