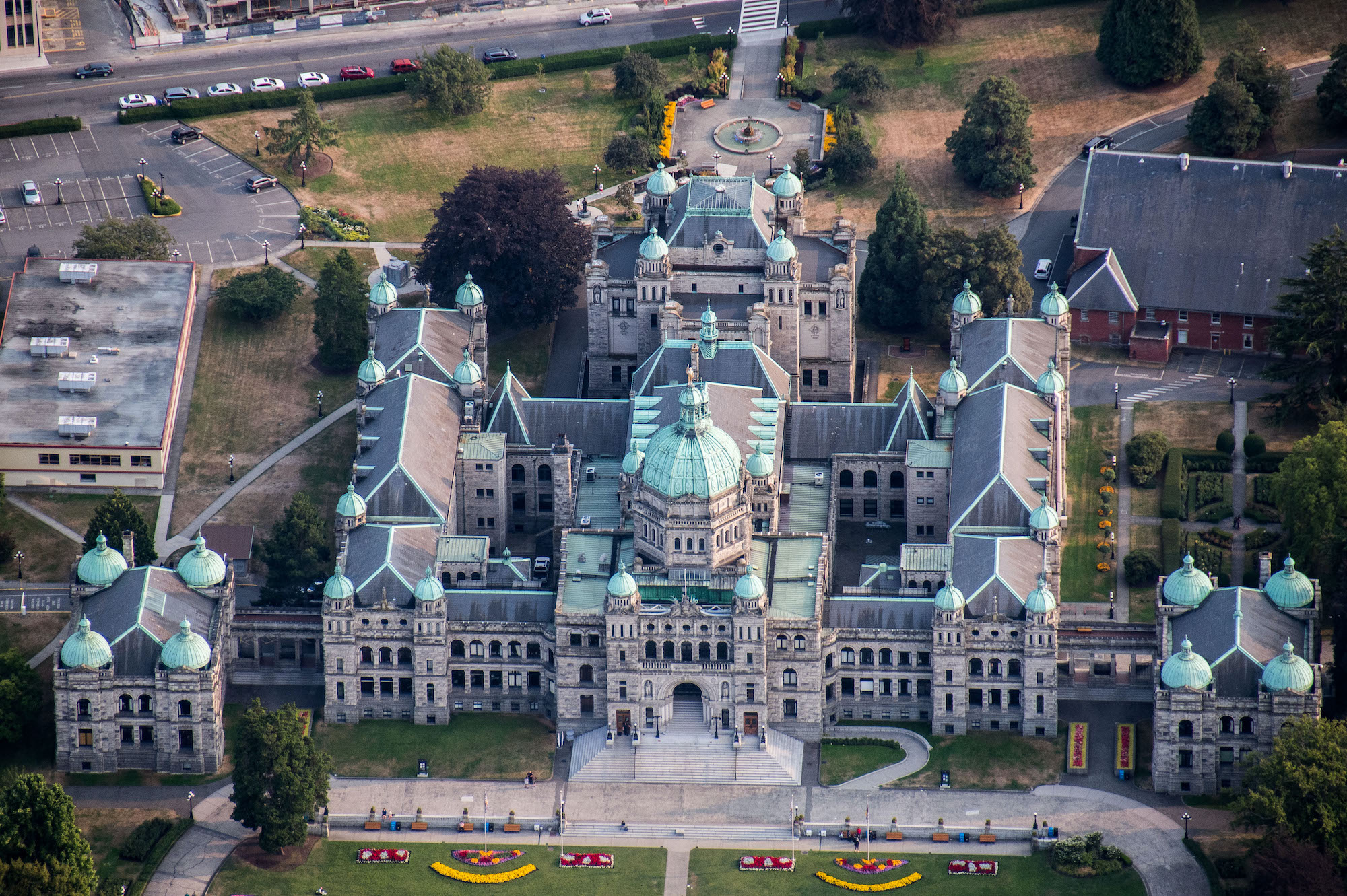 This week, the federal and BC provincial governments released economic plans for the future as a pandemic continues to rage across the country.

The two budgets, which project deficits of $354.2 and $9.7 billion respectively, plan to address a wide variety of needs.

The federal Liberals plan to pledge $17.6 billion to a green recovery, while the BC NDP shared a record $26.4 billion plan in infrastructure growth—including a focus on adding skilled trades training opportunities for Indigenous peoples, women, and individuals with a disability—as the province anticipates a creation of over 85,000 jobs in the sector.

“There’s some really significant things if they can pull it off,” Bruce Williams, CEO of the Greater Victoria Chamber of Commerce, said about the federal budget.

We’ve gone through both budgets to break down what the standouts are for businesses in Victoria.

Of all the money being spent federally this year, “probably the foremost among them is the daycare support,” Williams says.

The federal budget included $30 billion over five years towards the creation of a national child care program, and Williams sees it as a necessary investment towards bolstering the workforce across the country and in BC.

The challenge of securing daycare is the biggest impediment to mothers and single parents going to work, Williams said, and the plans could be a gamechanger for the provincial economy.

“Especially our economy, in this region, which has a worker shortage, our labour force needs all the help it can get to get people into their positions,” he said.

Other business leaders in Victoria echoed hopes for the future of the child-care program.

Emilie de Rosenroll, CEO of the South Island Prosperity Partnership, said the measure would be helpful not only for businesses but also workers and entrepreneurs looking for consistent child care—which, she says, has been an especially difficult barrier before and during the pandemic.

Regardless of the sector, Dan Gunn, CEO of Victoria Innovation, Advanced Technology, and Entrepreneurship Council (VIATEC), said the focus on child care should be highlighted.

However, specifically in technology businesses, Gunn sees the plan as a way to increase diversity from introductory to executive positions. In 2018, the Women in Tech World and the Discovery Foundation released a report that found BC employed women in the tech industry below the Canadian average.

Despite women making up 54% of post-secondary graduates in science and technology fields in BC, the report discovered women held just 15 to 20% of Science, Technology, Engineering and Math (STEM) jobs—below the national average of 25%.

“There is a consequence, unfortunately, that’s unevenly felt with children where women’s careers have often been more greatly impacted in a way that potentially slows their career path,” Gunn said.

“It goes a long way towards equity.”

Nationally, the federal budget proposed extending the Canada Emergency Wage Subsidy (CEWS) and Canada Emergency Rent Subsidy (CERS). Both were introduced last year to help businesses impacted by COVID-19 apply for claims to pay employees and for rent, to Sept. 25.

“Tourism, transportation, travel, a lot of leisure are big parts of our economy,” de Rosenroll said.

With regional travel restrictions recently implemented in the province and the future of the looser restrictions in the spring and summer still unknown, de Rosenroll sees the subsidy programs as necessary tools to keep vital Victoria industries afloat.

“A lot of our street-front businesses have suffered tremendously under the pandemic, and there’s a lot of traditional brick-and-mortar businesses that haven’t been able to operate at full capacity, so that keeps some of those businesses alive,” she said.

One of the biggest aspects from the federal budget that will impact BC and may be overlooked, Gunn says, is the creation of the province’s own regional development agency which VIATEC has backed in the past.

Regional development agencies are federal programs that work closely with businesses and innovators in specific regions to increase economic growth. In the past, the agencies covered regions including: Atlantic Canada, Quebec, the Territories, southern and northern Ontario, and Western Canada.

Provinces from BC to Manitoba were all incorporated through Western Economic Diversification—however, in the 2021 budget, over $550 million was pledged to establish a new regional development agency for BC.

While VIATEC has had a positive relationship with Western Economic Development, Gunn said the new BC-specific agency will allow for a narrower focus on the needs of BC businesses in particular.

“That [BC agency] won’t be something that each individual business might notice or feel,” Gunn said.

“But what it means is that our primary economic federal agency is going to have a much better understanding of how our economy is ticking and what they might support.”

Also nationally, as VIATEC is a Start-up Visa partner which allows them to review and endorse businesses from international entrepreneurs who want to move to Canada, Gunn is excited at the prospects of a $430 million investment to modernize Canada’s digital information technology infrastructure that manages immigrant’s applications

“Victoria is always looking for highly skilled talent, as is every city that has a strong technology sector,” he said, citing proposed plans to streamline Canada’s express-entry system as a way to bring in more highly skilled immigrants to the country.

Provincially, Gunn says, his big takeaway was seeing the government announcing plans to provide the InBC Strategic Investment fund with $500 million over three years. That investment, which will help BC companies anchor and grow their business, has been on VIATEC's wishlist.

“That’s long been VIATEC’s thesis, that we need to help our companies scale up further before they’re required or entertaining acquisition.”

One of the goals written in the South Island Prosperity Partnership’s constitution is raising the profile of southern Vancouver Island as a location of choice for fostering climate-friendly technology.

De Rosenroll said one of the biggest examples that will address that goal is the government’s planned investment in green initiatives—specifically the CleanBC Climate Plan, which received a $506 million boost through the 2021 budget, and the federal government’s $17.6 billion plan for a green recovery to put Canada on the right track to meeting climate change goals.

Also in the CleanBC program is a focus on reducing industrial emissions while encouraging innovation, highlighted by an allocation of carbon tax funds to two streams: one, an incentive program for businesses that reduce their emissions, and second, a fund that supports emission reduction projects.

“All of that is very encouraging because we need some big regulatory shifts to be able to incentivize the business community to meet Canada’s net-zero-by-2050 goal,” de Rosenroll said.

“I think that those are some areas of promise for transforming our industry over time.”

One issue Williams brings up about Victoria in particular is food security.

Vancouver Island’s local food supply has been in a steady decline for decades; by 2019, the share of local food purchased on Vancouver Island dropped to about 10 percent, down from 85% in the 1950s. While the 2021 provincial budget allocated over $29 million to food security and farming, Williams says he wished the provincial government was a bit more engaged in how Vancouver Islanders can ramp up their own food production.

There are “a couple reasons for that,” Williams says. “One, it’s healthy and smart. Secondly, it is a lower carbon footprint because we don’t have to import all that stuff by boat or by truck. And thirdly, all those products that are being grown and produced for us are creating jobs outside this jurisdiction.”

As we move towards post-pandemic life, de Rosenroll says, it should be monitored how the budgets climb out of the forecasted deficits in the coming years. The federal budget includes an aggressive plan to tackle the deficit, with projections for it to decline to a little over $30 billion in 2025-26, while BC Finance Minister Selina Robinson discussed the idea of returning to a balanced budget in about seven to nine years in a press conference earlier this week.

Gunn, meanwhile, didn’t have a wishlist for either budget other than stability, and applauded the governments for their measures.

“Budgets should set priorities and they should signal new things, but they certainly shouldn’t create instability or uncertainty,” he said. “I give credit to both the federal and provincial governments that I didn’t get that sense.”

A Victoria couple is refashioning the prosthetic design industry

Sooke Pocket News throttles back after years of battling industry trends
The online publication barely scraped by during its six-year run, even with strong readership

The couple behind Victoria’s horror escape room launches thrilling new indoor attraction on Yates Street
The mini-golf course at Haunted Manor takes visitors through a twisted course full of (family-friendly) horrors.
Have a tip?
Use our confidential inbox