October 4, 2022
Get the news and events in Victoria, in your inbox every morning.
Thank you! Your submission has been received!
Oops! Something went wrong while submitting the form. 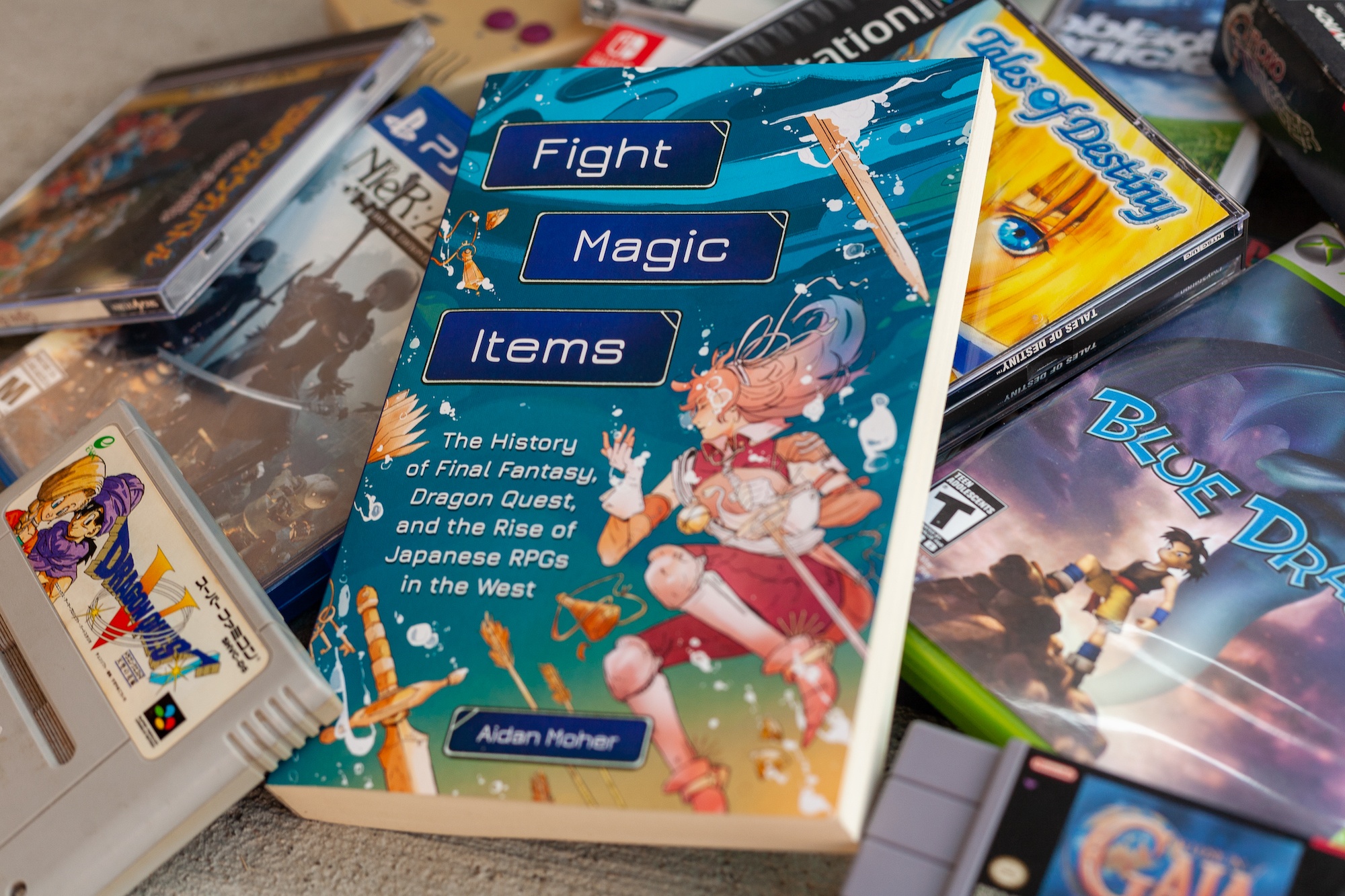 Aidan Moher is taking his writing on video games to the next level.

The Victoria and Nanaimo-based writer has been writing professionally for years with bylines in video game heavy-hitters like Kotaku and Wired. In 2014 he took home a prestigious Hugo Award for best fanzine with his online magazine A Dribble of Ink.

The book, which launches today, builds on Moher’s decades of personal and professional experience with video games, focusing on the particular, influential subgenre of Japanese roleplaying games, or JRPGs.  Moher says his personal experience with JRPGs dates all the way back to when he was a child, being babysat by a teenaged friend of his family.

“One night he came over with a new game for my new Super Nintendo called Final Fantasy 3,” Moher said. “He popped that in the console—and that was it, at that point.”

That kind of personal experience mixes with the professional history of JRPGs in Moher’s book. Over the course of 33 chapters, Fight, Magic, Items explores the backgrounds and development of titans of the genre like Dragon Quest and Final Fantasy, while also grounding the narrative in Moher’s own relationships to many of the games.

He set out to make a book that would be appealing to gamers and neophytes alike by honing in on the unique backstories of the creators.

“Those human stories—about what drives us, what drives our creative ambitions—I think are interesting to everybody,” Moher said. “I hope that people will read the book and feel like they know more about that creative process.”

It’s a unique process for a piece of culture writing, because unlike writing about other artistic disciplines that date back hundreds or even thousands of years, the individuals involved in video games are largely still alive and available to speak about their work.

Some of the people Moher spoke to for the book include Alexander O. Smith, a noted translator of Japanese games for English localization, including Vagrant Story, Phoenix Wright: Ace Attorney and Final Fantasy XII, and Peter Tieryas, a writer and VFX Artist who has worked on games such as Star Wars Jedi Knight II: Jedi Outcast, Escape from Monkey Island, and Medal of Honor: Pacific Assault.

The book traces the genre’s development, from spectacularly successful games like Dragon Quest and Final Fantasy taking their first tentative steps, all the way until today. Even these modern-day success stories, though, were pioneers on shaky ground; Final Fantasy in particular was so named because the studio feared it would be their last title and a financial failure.

Moher’s research even uncovered some unexpected Canadian connections. In looking at the crossover in themes and inspiration between Western games, beginning with Dungeons and Dragons, and JRPGs, Moher spoke with one studio in Quebec that is making its own JRPG-style game, called Sea of Stars.

In fact, Canada, which is the world’s third-largest producer of video games after the United States and Japan, has roots in the industry that go right back to one of the most influential companies out there: Nintendo of America.

Moher highlights in his book that the founding president of Nintendo of America, Minoru Arakawa, first came to North America when he moved to Vancouver with his wife, Yoko, to invest in a condo project.

Yoko was the daughter of Hiroshi Yamauchi, the notoriously prickly third president of Nintendo, and Minoru Arakawa effectively “married into” the family business— a business Yoko detested, almost as much as she detested the North American lifestyle.

Moher writes that the family was hauled by Arakawa into a Vancouver hotel and taken to a Denny’s next door, where Yoko declared: “If this is America, I have made a big mistake.”

After first investing in a million-dollar condo project in Vancouver, Arakawa was then tapped by Yoko’s father to run Nintendo’s new American division out of New York City, and the family left Vancouver for a cross-continent road trip on May 18, 1980, which Moher notes is the same day Mount St. Helens erupted in Washington State, a coincidence he describes as a “prophetic omen of Nintendo’s explosive growth in the West under Arakawa’s guiding hand.”

“When this all tied back to Canada, I was like, this is so fascinating to me, because I don't think of Canada being necessarily connected to the world of video games,” Moher said.

“But that of course, has changed a lot. Canada is a huge home for so many game developers and publishers, and I think that it's only kind of natural to look back and find all these connections to Canada.”

Fight, Magic, Items will be available anywhere books are sold, including online through Amazon or Kobo and in stores like Chapters and Indigo, as well as local favourites like Munro’s Books. Local buyers should also keep an eye out for signed copies, which Moher says he is planning to put his mark in for select stores on Vancouver Island.

Now a parent raising some members of the next generation of gamers, Moher hopes his book will find audiences both in and out of the gaming world.

“I think that people can connect to those feelings, that nostalgia, just remembering back to playing a game with their brother or their sister one night,” he said.

“I think that people will hopefully take that away and think back and look at the way that art can… inspire people; the way that it can leave memories and bring people closer together. And that's sort of a universal experience.”