April 8, 2021
Get the news and events in Victoria, in your inbox every morning.
Thank you! Your submission has been received!
Oops! Something went wrong while submitting the form. 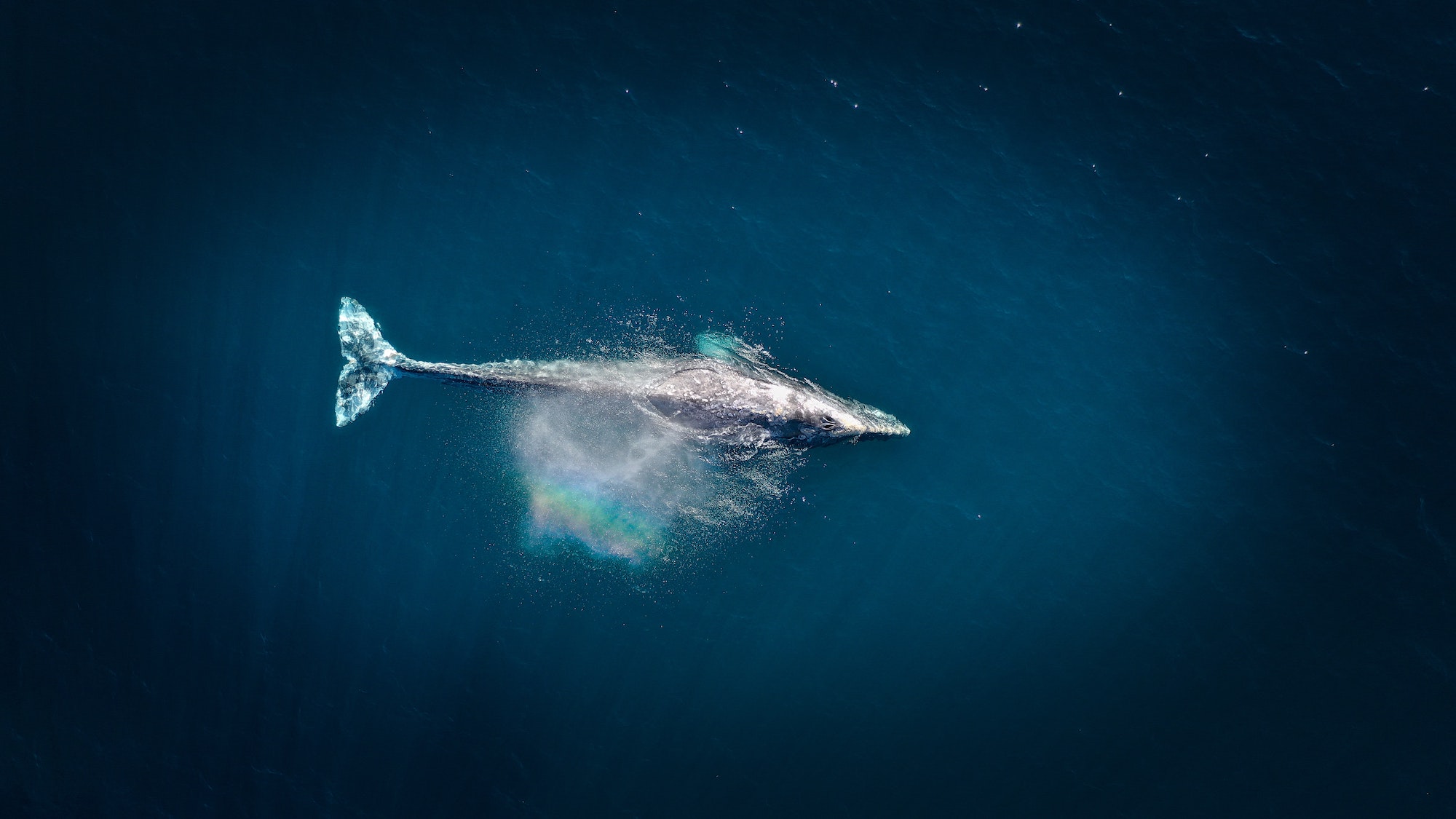 This article was written based on interviews conducted for the Capital Daily podcast. Listen and subscribe here.

The window for Vancouver Islanders to spot a migrating grey whale has just opened. Between April and June, mothers and their calves will journey north from breeding lagoons in Baja California, Mexico, to their summer feeding grounds in northern Alaska, hugging the coast all the way. It’s the longest seasonal migration by any mammal on the planet.

Seeing an eastern Pacific grey whale (Eschrichtius robustus) feels miraculous, and that’s not far off: after rebounding from near-extinction due to commercial whaling twice in the last 200 years, they still face threats from entanglement in fishing gear, consuming plastic and other pollutants, and their dwindling food supply due to climate change. Even without anthropogenic dangers, a third of young calves get hunted by orcas on their long migration.

The revitalization of these enormous creatures (adults can reach 11-14 metres) has deep significance for the Nuu-chah-nulth peoples as well as their linguistic and cultural relatives, the Makah, who reside on the Olympic Peninsula. “Our whaling tradition was entwined in a complex web of social interactions, with whaling serving important social subsistence and ritual functions,” sayes Charlotte Coté, a descendant of whalers and author of Spirits of Our Whaling Ancestors: Revitalizing Makah and Nuu-chah-nulth Traditions.

During the creatures’ time spent on the endangered species list, which was also during the heyday of marine parks like Sealand in Oak Bay (closed in 1993), many settlers discovered a great love for these intelligent mammals. Today there are an estimated 18,000-24,000 grey whales, and a few hundred of those are “residents,” meaning that they will hang out in the inshore waters of BC and Washington for the summer and meet up with their relatives swimming south around October.

In the 1840s, American whalers were preoccupied with catching sperm whales (Physeter macrocephalus) and right whales (Eubalaena australis) when they discovered the calving lagoons of eastern Pacific grey whales in Baja California.

Unlike some other whale species that are inclined to flee danger, grey whales are fighters. “The barnacles on their bodies act a bit like brass knuckles. They’re very sharp, abrasive, hard,” says Lance Barrett-Lennard, a whale researcher at Ocean Wise, the umbrella organization for the Vancouver Aquarium.

Although the whales—known among European whalers as “devil fish”—put up a fight big enough to sink some whaling boats, pregnant and nursing mother whales and their newborns were no match for an industry that profited off of their blubber. The lagoons turned deep red season after season until naturalists assumed the whales had gone extinct in the 1890s.

Populations rebounded slightly in the next few decades, but the commercial whaling industry took that as a sign to resume harvesting in full, setting up “floating factories” to process carcasses at sea. The mammals’ second reprieve occurred a few decades later, when America’s focus turned away from the ocean for a while in the middle of the 20th century.

“Right after World War II, scientific observers in southern California, especially at Scripps Institute near San Diego, start noticing that their numbers in these migrations are growing, and so they start to count them year after year. And lo and behold, they discovered that their numbers are increasing, which was stunning to all of them,” says Jason Colby, professor and department chair of History at UVic and author of Orca: How We Came to Know and Love the Ocean’s Greatest Predator.

In 1946 the International Whaling Commission was formed and a moratorium on grey whale hunting was instated the next year. “What's interesting is that, in 1994, they became, in the US, the very first whale species to ever be removed from the endangered species list,” says Colby.

Grey whales then entered a curious new era of scientific study, temporary and permanent captivity, and new sub-lethal threats from human behaviour, like noise pollution. Although grey whales are not as social as some other whale species, and are therefore not as vocal, other underwater noise can disrupt their communication and navigation.

The whales migrate north mostly to feast. They put on a thick layer of blubber off the coast of Alaska by dropping onto the muddy, shallow seafloor and straining out small invertebrates using their coarse baleen. However, the productivity of those food sources varies year to year, and is influenced greatly by climate change.

“We’ve had a few years over the last 30 years or so, where we’ve had really high mortality rates,” says Barrett-Lennard. “And during those bad years, the carcasses that have come ashore are very thin or emaciated. It seems that in those years, they just haven’t been able to put on enough calories up in the high latitudes.”

Even with the decline of widespread whaling, the survival of grey whales is still not assured.

Predating any of those dramatic threats to the species, grey whales were a food source for the Nuu-chah-nulth and Makah peoples, as well as providing valuable economic, spiritual, and religious networks that formed their cultures.

Coté comes from two family lines of whaling ancestors, which was a hereditary vocation. From birth, her great-grandfather was raised, “to connect to that spiritual world in a very sacred way,” she said, so that when he was finally ready to get in a canoe and capture a whale, it was done through prayer and ceremony.

However, by the time he was old enough to hunt whales in the late 1800s, the unregulated commercial whaling industry had already crashed their populations. Traditional whalers could no longer provide for their communities, and their identities were stripped of meaning.

Nearly a century later, a major storm in the traditional territories of the Makah unearthed thousands of whaling artifacts. That discovery, paired with the incredible revival of grey whale populations and a landmark court case in 1974 that affirmed the Makah people’s treaty right to whale led the nation to an announcement that would shake the west coast: they were going to revitalize whale hunting.

The reaction was swift and ugly. According to Coté, the opposition had a lot of misconceived ideas of indigeneity and the significance of whaling that had roots in the long history of colonization and racism in North America.

“Many people see the death of a whale through a Western cultural lens, and they really ignore the spiritual and sacred elements that are attached to our tradition and how important it is that when you do connect to an animal, or a plant that gives itself to feed you, that you're being respectful to it in this mutual world of reciprocity so that it will continually provide itself to you,” said Coté.

The campaign resulted in the harvest of one female grey whale, “which didn’t have any kind of ecological impact on the population,” says Colby. “But it was a flashpoint for people who saw grey whales, like other whales as sort of a celebrated group of animals that should never be harmed.”

While Indigenous grey whale hunts have not continued, the Makah in Washington State applied in 2019 for a permit from the US government to hunt four whales every two years. Indigenous hunts of whales like bowheads (Balaena mysticetus) and narwhals (Monodon monoceros) have persisted elsewhere, and are not considered harmful at anywhere near the scale of the industrial whaling that was allowed to go on uninterrupted for centuries.

A western scientific understanding of these creatures has rapidly developed in the last half century to allow settlers and non-whaling nations to grasp the scope of what was lost, and what is still at stake.

For anyone looking to spot a grey whale off the coast, the lack of a dorsal fin may make it a bit more challenging. Oftentimes grey whales are mistaken for large rocks because of their mottled grey skin and unobtrusive surface behaviour. If you happen to spot them feeding, you may see a thrashing behaviour in shallow waters and occasional sights of their tail flukes above the surface.

The best places to spot the migrating whales is near Tofino and Uclulet, but they do rest in Vancouver Island’s many bays along the Salish Sea and Haro Strait for those living anywhere from Sooke to Sidney. Non-essential travel within BC is restricted until April 19, but thanks to the grey whales’ recovering population, they’ll still be there when travel is permitted again.