July 19, 2022
Get the news and events in Victoria, in your inbox every morning.
Thank you! Your submission has been received!
Oops! Something went wrong while submitting the form. 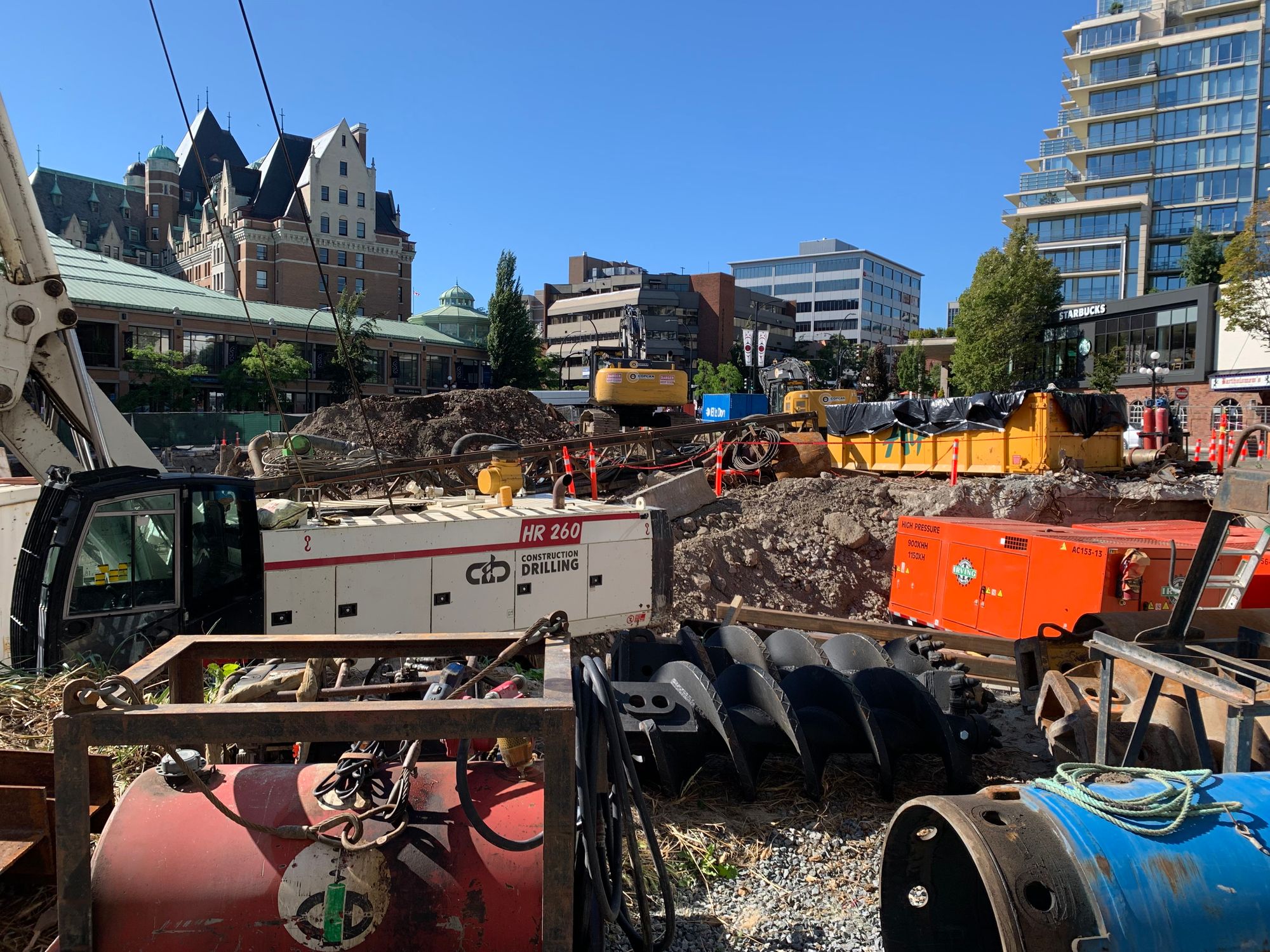 The 12-storey TELUS Ocean office tower underway in downtown Victoria has attracted its share of opinions for its potential impact on the city’s skyline, but now it’s under the spotlight for what may exist beneath its foundation.

The glass-walled, wedge-shaped building planned for the corner of Douglas and Humboldt streets sits on a potential treasure trove of artifacts from the mid-to-late 1800s, says historian Chris Hanna—and it may be the best and final chance at uncovering archaeological evidence from what was once one of Victoria’s most culturally diverse neighbourhoods.

But only if excavators act quickly.

The story of Kanaka Row

A half-century before the Empress Hotel opened its doors in 1908, Victoria’s Inner Harbour—where Humboldt Street is today—was home to a medley of Hawaiians, Lekwungen peoples, and Chinese settlers.

Hawaiians had arrived in Victoria and the Gulf Islands in the mid-1800s, some having come from California. Many settled because they could vote and own property, so long as they became British citizens. (Still, living conditions for Hawaiians were far from ideal.) They worked as sailors, fur traders, carpenters, blacksmiths, mill hands, and farm workers, and, UBC historian Jean Barman writes, bought land around the colonial capital as early as the 1860s. The name they came to be known by—Kanaka—stems from the Hawaiian kānaka ʻōiwi, meaning “human being.”

For close to 50 years, they lived by the mud flats that made up the original southeastern edge of the Inner Harbour. But little remains of the homes they lived in, or the lives they led.

“It’s part of our history which is pretty well being ignored [and] overlooked,” Hanna told Capital Daily.

BC’s Heritage Conservation Act offers stringent guidelines for protecting historic sites throughout the province—but the remains of Kanaka Row fall into a muddy middle ground. While the province says archaeological sites “may date anywhere from recent times to 14,000+ years ago,” the act is clearest in its protections for sites dating back to 1846 and beyond.

Under the act, a person cannot “damage, excavate, dig in or alter, or remove any heritage object from a site that contains artifacts, features, materials, or other physical evidence of human habitation or use” before 1846 without special permission. But no such language exists for more recent sites.

“Even if it’s a First Nations site, there's no protection offered,” Hanna says.

A longtime historian who has researched Kanaka history for more than 30 years, Hanna would like to see TELUS and Aryze Developments conduct a proper archaeological survey of the site. He argues the likelihood of finding remnants from Kanaka Row beneath the future Ocean building are high, given the makeup of the soil.

“It’s basically mud. Anything that drops in… is going to be preserved very well,” Hanna says. “Who knows what artifacts are in [there]?”

In an emailed statement Tuesday afternoon, TELUS told Capital Daily its developers had yet to uncover any artifacts.

To date, neither TELUS nor Aryze have announced any plans for a fulsome archaeological survey at Douglas and Humboldt. None of the speakers at the last public hearing for the TELUS Ocean building in Dec. 2021 brought forward any mention of an archaeological assessment either.

According to TELUS, the BC Archaeological Branch completed an assessment in 2019, at which point they determined the site had “low potential for archaeology findings.” But historian Kelly Black, an adjunct professor at Vancouver Island University, has doubts about the branch’s conclusions, given its stated focus on sites predating 1846.

“I would like to know if the assessment TELUS is referring to included post-1846 archaeology,” he wrote to Capital Daily.

Last August, the non-profit Archaeological Society of BC presented its concerns in an open letter to TELUS via its website portal, but past president Jacob Earnshaw told Capital Daily they never received a reply. The group also shared its concerns with Victoria’s Heritage Advisory Panel, who replied that any subsurface remains would fall under the purview of the BC Archaeology Branch.

But, he said, the branch wasn’t interested given the site in question had been occupied after 1846.

Open Letter: ASBC to City of Victoria by Martin Bauman on Scribd

“Our argument was that since the Telus [site] was once shoreline it would also have a high potential for pre-1846 Indigenous sites as well as historical Kanaka materials,” Earnshaw wrote in an email to Capital Daily.

But in BC, no such protections exist for mere archaeological potential—only confirmed evidence.

“If the lot contained recorded pre-1846 materials, or was within 50 metres of a known pre-1846 site, an archaeological assessment would be required,” he wrote.

Excavation has already begun on-site, but Hanna believes it isn’t too late to preserve potential artifacts if developers trucked the dirt they removed to a site where it could be sifted.

“It’s not the greatest form of rescue archaeology, but it’s going to pull up some of the artifacts,” he says.

TELUS says it has implemented protocols in the event of an archeological find, and has also assembled a team of archaeology monitors “that will be present on site at all times” throughout the excavation process—but it is not yet clear what those protocols are, nor the degree to which its excavation crews are actively looking for artifacts that might otherwise pass unnoticed in a pile of excavated dirt and rubble.

“To me it says, ‘We did and are doing the bare minimum that was required of us. Nothing more,’” he told Capital Daily.

This story will continue to be updated.