May 20, 2021
Get the news and events in Victoria, in your inbox every morning.
Thank you! Your submission has been received!
Oops! Something went wrong while submitting the form. 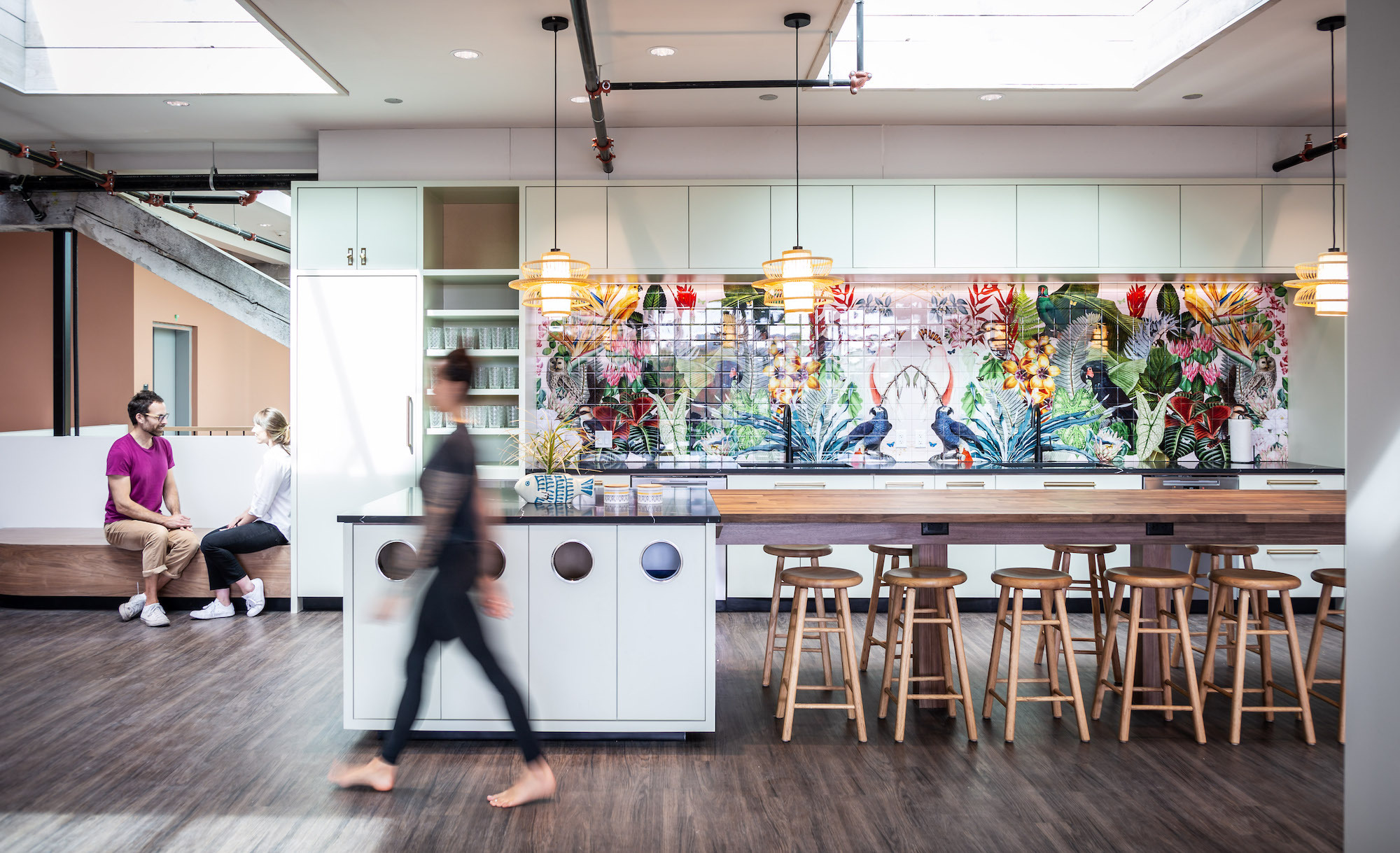 KWENCH is more than a business for Tessa McLoughlin—it’s an acronym that represents a resilience to overcome difficult moments in her life.

Coming to Victoria in 2013 following a divorce, McLoughlin used KWENCH (Knowledge, Wellness, Experiences, Novelty, Curiosity/Connection fostering Health/Happiness) as a positive mantra to get through the stress of being a newly single mother and family rock to her two kids.

While looking for a job, McLoughlin visited a friend in Vancouver who was a member of the Arbutus Club, a private luxury recreation complex. This made her wonder why Victoria didn’t have a similar place where she could both meet new people and accomplish daily work tasks.

“I was like, ‘This is kind of what I want, but more for business, startups, culture, arts, and community,” she said. “I said, ‘Hell, then I’m going to start it myself, because I cannot be the only one who wants this.’”

With a background in music and performance, McLoughlin started working for Watershed—a co-working company in Victoria that is now shut down—until 2016 with the hope of learning what it’s like to run a business like that while she found a location for KWENCH.

On a whim after leaving Watershed, she decided to visit a space that was available on Store Street. Touring the property, McLoughlin decided it was too small. As she started to leave, however, her eyes drifted towards a staircase that led into an attic.

“I went up into this dingy, dusty attic full of junk. There was no light, nothing,” she said.

But instantly, McLoughlin knew this would be the space to host her vision for KWENCH.

She convinced the owner of the building, Matt Phillips, founder of Phillips Brewing, to convert the large room into a culture club for people to meet and work. Construction on the Store Street building took two years, and, in the meantime, McLoughlin opened KWENCH in a smaller space on Fort Street.

Throughout those two years, she stayed up until three in the morning most nights stressing about finding the over $1 million she needed for the KWENCH project.

As a divorced, female entrepreneur with few assets who had never been in business before, McLoughlin says there were a lot of obstacles against her in convincing investors and bankers to fund her idea. But she was persistent in her calls and eventually found a banker who believed in her, obtaining the money needed for the new building.

When refurbishing was complete in October 2019, McLoughlin was ecstatic to move KWENCH into the 25,000-square-foot facility with bright, open spaces, quiet, hidden corners, and an atmosphere that’s become a magnet for eager entrepreneurs.

“When KWENCH opened in October it was, one, such a relief,” she said. “We built up our clientele very, very quickly. January and February were incredible months.”

March was the season when KWENCH was booked nightly for events: weddings, business conferences, and workshops. What McLoughlin couldn’t expect, though—what nobody could really expect at the time—was that a virus would bring her dream to a standstill, cause lockdowns across the globe, and reshape the idea of in-person work for businesses everywhere.

“In March, all these events that had been booked, we had to start cancelling,” she said. “So, half of March, April, and May, we completely shut down.”

Adjusting to the new normal

When COVID-19 first began to spread, one of the initial changes to everyday life for employees and business owners was adapting to the challenges of remote work.

Almost five million Canadians began working from home at the start of the pandemic, and while learning how to share a screen or unmute yourself provided early trouble, a majority of folks enjoyed staying in the comfort of their homes.

In an April 2020 survey led by Vancouver-based public opinion firm, Research Co., 73% of Canadians said the working from home trend would continue even after the pandemic subsided.

As the pandemic slogged on throughout the remainder of the year and into 2021, many British Columbians maintained a preference for remote work, leading to a belief that working from home may be the way of the future.

In a second poll of 700 adult BC workers from two months ago, Research Co. unveiled that nearly half of the employees surveyed wanted to continue working remotely and would look for a different job if they were forced back into the office—including 56% of those aged 18 to 34.

“All of the stories we used to see about the grand opening of the Hootsuite headquarters, complete with beer on tap, seems like it was 20 years ago,” Mario Canseco, president of Research Co, told Capital Daily.

Today, Canseco says employers need to grapple with a shifting landscape where employees aren’t enticed into the office by work gyms, yoga classes, or casual Fridays.

“Now it’s all about social distancing, flexibility for people who are working from home… I don’t think you’re going to win over an employee now by offering them a bunch of perks when what they really want—especially when they’ve already done so—is to work from home.”

Saul Klein, dean of the Gustavson School of Business at UVic, says it’s important to acknowledge there is still a privilege for workers who have the infrastructure to do their job from home.

However, the pandemic has proved that work production doesn’t decrease from home, and, in fact, many employees in a StatCan survey reported the same amount of productivity from remote locations, if not more. Klein says businesses will have to navigate the team-building aspect and social interaction of in-person work in the future.

“I think, going forward, we’ll see more of a hybrid model, a blend, where [businesses] will be looking closely at who has to be in their office when… and what could be done remotely. Maybe it’s a day or two a week working from home, when previously it was zero.”

When asked what advice he would give businesses who are looking to cater to their employees, Canseco said they need to figure out their return on investment. For the longest time, attracting the best employees was through an office with amenities, but now, millennial workers in particular maintain a preference for a choice of where they work.

McLoughlin’s vision for future of work

Following two and a half months of closure, KWENCH reopened last June with strict COVID regulations. McLoughlin admits that period was tough; however, the loyalty from her members helped keep KWENCH afloat throughout the remainder of the pandemic.

As an added incentive for customers, McLoughlin offered a discount on their fees if they kept their membership during COVID lockdowns.

“There were a lot of financial people who told me not to do it, but I really believed if we showed our members that we understand everybody’s hurting in different ways… that really helped to show our loyalty, be transparent,” McLoughlin said.

“Our members stuck by us and were like, ‘We want you to [survive] when things open up again. You’ve changed my life.’”

That flexibility illuminates McLoughlin’s vision of work in the future—and the hybrid model Klein mentions will be more prevalent in a post-pandemic landscape—meaning employers will have to listen to the needs of their employees.

What she has noticed over the past 15 months is that employees want the freedom to choose where they work. Sometimes they want to work from home, but if they aren’t afforded the option to do so—be it because of children, a lack of space, or need for in-person interactions—renting space at a co-working facility like KWENCH is another alternative.

To McLoughlin, the desire for in-person connection is still necessary no matter the work medium. Through KWENCH, she strives to offer both a work space for folks, and culture that makes people feel seen in an increasingly digital work environment.

“Human connection is the most important thing in terms of happiness and retaining your employees.”