May 12, 2021
Get the news and events in Victoria, in your inbox every morning.
Thank you! Your submission has been received!
Oops! Something went wrong while submitting the form. 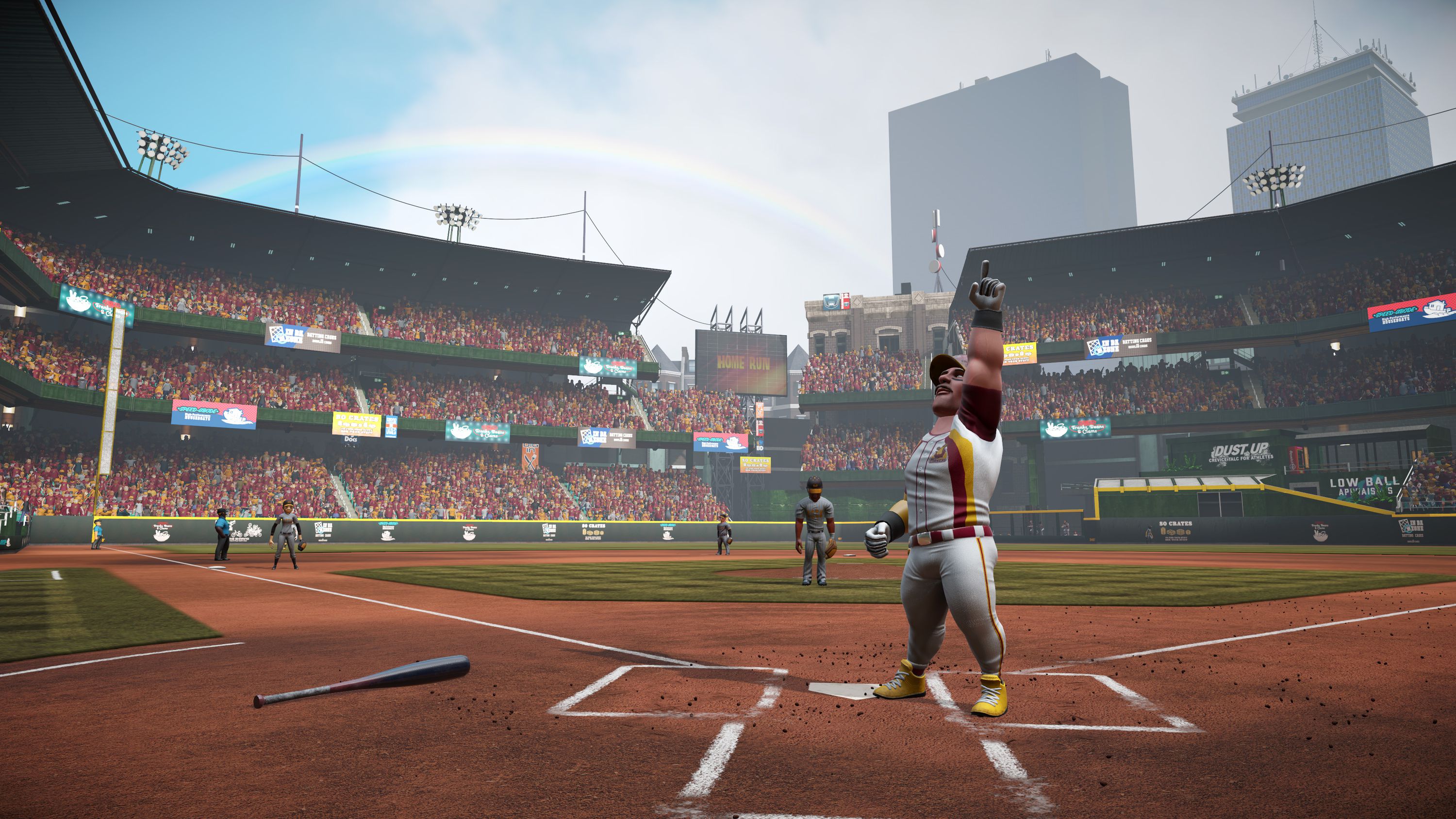 This month, the company was bought out by the biggest name in sports video games, EA SPORTS.

First launched in 2014, Super Mega Baseball has three installments; the third and latest version, Super Mega Baseball 3, was released in May 2020. The franchise has captivated video gamers and reviewers for its ability to provide casual yet competitive baseball gameplay with cartoon-looking characters.

Although the acquisition with EA was recently announced, the global video game giant had long been eyeing the Vancouver Island developers.

Following conversations that began last summer, Ramjagsingh says, EA saw their startup as a venture that would nicely integrate into their large sports gaming portfolio.

“Started from being a fan of the game, and getting to know Scott and Christian—how they operate, run their studio, the culture they drive within their team, the passion they have for making sports games,” Ramjagsingh said. “It felt like a really strong fit for us.”

News of the acquisition is another addition to Victoria’s booming tech industry.

At the beginning of 2021, CBRE Group, an American-based real estate company, ranked the top Canadian tech markets based on talent and operating costs. Victoria was ranked seventh in the report.

Additionally, two months ago, over a dozen Victoria-based tech companies were featured on the “Ready to Rocket” list, a report compiled by the consulting firm Rocket Builders that named BC companies who are most likely to succeed across a variety of tech sectors including cleantech, information and communications, and digital health.

More than 213 companies were listed on Rocket Builder’s list, and the firm projects those businesses will likely see growth, venture capital investment, or acquisition within the year.

Dan Gunn, CEO of Victoria Innovation, Advanced Technology and Entrepreneurship Council (VIATEC), says the visibility on the South Island’s tech scene in recent years is proof that large companies and investors are looking at Victoria as a viable place to build a world-class tech company.

“Most people, when they visit here, they don’t see tech because tech companies here don’t sell a lot of products in Victoria. They’re here because they want to be in the city, maybe universities and colleges brought them here or the lifestyle keeps them here,” Gunn said.

“So they can be somewhat invisible, whereas tea and flowers are heavily promoted when they visit.”

While Victoria may not appear to be a thriving tech hub from the outside, the rankings and acquisitions prove that interest in Island-based companies is real.

“Having such a great developer in Victoria, I see that as an opportunity for us to attract talent from all over the Island,” Ramjagsingh said.

In 2009, when they left developer jobs at Shipconstructor Software to launch Metalhead, Drader and Zuger wanted a chance to mold their own company. The question was, what would that company produce?

“They say when you go into business together it’s just like being married. In this situation, that is not untrue,” Zuger said.

“We may have seen each other more than our significant others,” Drader added.

Although they both had technical backgrounds in computing—Drader graduating with a Computer Science degree from UBC and Zuger receiving a UVic Computer Engineering degree—they were naive to the gaming industry. However, they used that innocence to their advantage, approaching the challenge of game development with an open mind.

“We hadn’t been in the industry, but here’s [our mindset]: ‘We have an idea of what we want to build, and we’re going to try and make it happen,’” Zuger said. “And that’s what we did.”

Both Zuger and Drader had a passion for video games, though, the inspiration behind creating baseball-specific games—and eventually the Super Mega Baseball series—was derived from Drader’s childhood nostalgia of the sport. He grew up playing baseball, and his father coached him throughout adolescence.

As they focused on the game’s creation, Drader honed in on another passion he developed from the sport: coaching. Using knowledge from the sport’s rules and coaching strategies were key elements, he said, in the development of a sports game franchise. As a fan and baseball player himself, learning coaching materials forced Drader to think critically about situational baseball outcomes—hit and run plays, steals, pinch hitters—and how those could be applied within the video game.

Like any other startup, they second guessed whether leaving their former jobs was the best decision. From launching Metalhead in 2009, it took nearly six years to form the idea, create designs, and launch their first game, Super Mega Baseball 1.

During that time, they had multiple occasions where they questioned whether they should forge ahead.

“When your friends are having weddings and things like that, you’re like, ‘Well, maybe I can’t go to this right now because I literally can’t afford it,’” Zuger said. “How do you live with that?”

Having two co-founders, Drader said, was another invaluable lesson in navigating the tumult.

“One cool thing about founding a company with two people is at least when one person is down, the other person can bring them up,” he said, “Your little organization is more of the average of your two emotional states.”

Following EA’s purchase of Metalhead last week, some fans on Twitter ridiculed the move, worrying that the video game giant would ruin the independent franchise and their crown jewel Super Mega Baseball. While news of the acquisition is still new, talks on Super Mega Baseball 4 and other game interests between EA and Metalhead are just beginning.

The foray into baseball follows EA’s renewed interest in the sport, as earlier this year the company purchased Glu Mobile, designers of a mobile baseball game, for $2.1 billion.

In the first couple months, Ramjagsingh said, EA is eager to work with Metalhead while being mindful of their design process.

“The first couple months are just going to be understanding how they work, how they do what they do… just a lot of exploration in listening and learning how they do things,” Ramjagsingh said. “Then, looking for opportunities through those conversations to leverage the scale, size, and power of EA to amplify the work they’re doing. That’s the real opportunity for us—learning how they operate—and [we] absolutely don’t want to lose the magic that they have.”

When asked about fears from fans about the company joining forces with EA, Drader said he’s been told that he and his team will continue to do the work that originally sparked interest from EA, and that the move will be an opportunity to learn and build their company.

“I think it’s going to be super exciting and there'll be a lot of new relationships that lead to new things for the existing SMB community and Victoria scene,” he said.

Gunn appreciates that fans of Metalhead root for the scrappy, independent video game company. He’s excited for Drader and Zuger, and at the end of the day, he says it’s up to the founders to decide what moves are best for them in growing their company.

“When EA SPORTS says, ‘You have something valuable,’ that is a great deal of confidence and validation for a Victoria company,” Gunn said.

“I do know that [Metalhead] worked really hard and that’s entirely their decision how they want to handle this, and I suspect they took that into account when they decided whether or not they wanted to do this.”

While, personally, working with EA has excited Drader and Zuger, they are also energized for gamers on the Island.

“There’s an industry leader making a big investment in this city,” Drader said. “It’s going to mean more attention on the local industry, and there’s already some great talent here but I’m hoping this accelerates the addition of talent to the city.”