March 18, 2021
Get the news and events in Victoria, in your inbox every morning.
Thank you! Your submission has been received!
Oops! Something went wrong while submitting the form. 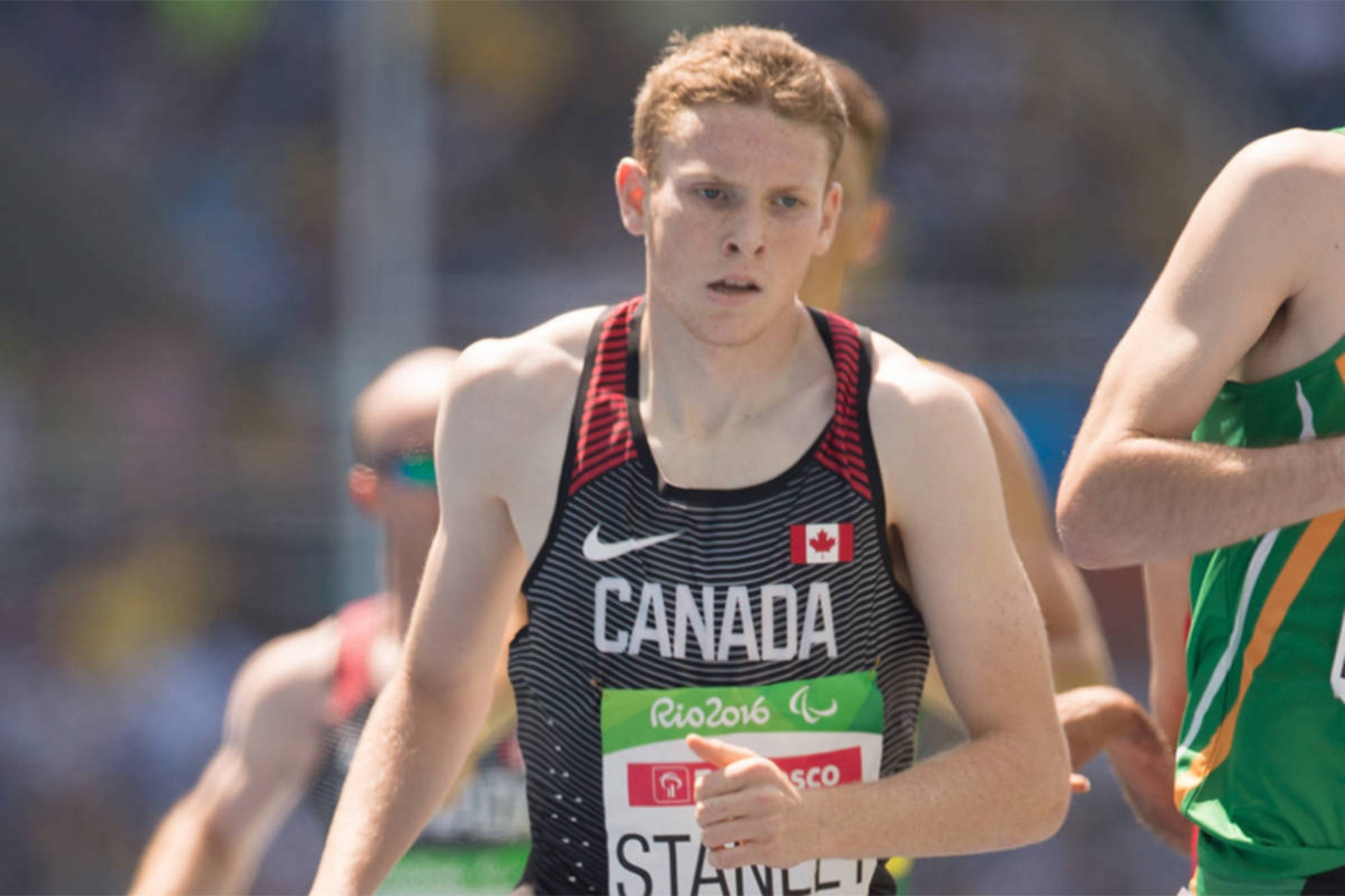 Walking from the gravel parking lot to the track, you can’t miss the three-metre high poster of Liam Stanley. Outside the Pacific Institute for Sport Excellence in Saanich, Stanley is photographed in a mid-race glare on the back of a shipping crate.

Twenty metres from the crate, the real-life Liam Stanley, 23, quietly walks back and forth on the track. Tonight, he’s pacing a pair of runners, and running his own 200-metre workout afterwards.

Michael Barber, a 20-year-old Victorian with autism, and former NCAA athlete Jérémie Venne, 24, are racing a 1,200-metre “time trial”—a race that has been used during the pandemic to measure fitness, but times won’t count in world rankings.

Stanley is slated to guide Barber and Venne through one lap of the track in 63 seconds, in hopes of leading them to season or personal best times. For Barber, he’s seeking to dip under the three minute and 10 second barrier for the first time.

It’s not the Parapan American Games, the World Para Athletics Championships, or the now-postponed 2020 Tokyo Paralympics—where Stanley is expected to be a contender for a medal this summer. It’s a crisp Wednesday evening in February, yet Stanley is concentrated on this time trial like it’s an international race.

“You want the inside, Liam?” says Bruce Deacon, a two-time Olympian and Stanley’s coach, as the athletes line up on the track.

Stepping into the infield, Deacon starts the runners. Stanley quickly sprints to the front. His long dirty-blonde hair flows in the wind, his arms and stride favour his left side, while Barber and Venne follow close behind.

The first hundred metres is quick. A little too quick. With the group halfway across the track, Deacon looks down at his watch. It reads 29 seconds.

The identity of an athlete

Stanley is a man of few words but many thoughts. At birth, he suffered a stroke that weakened the right side of his body, but it never derailed his motivation to play sports.

“His parents tell the story of waking up in the morning to this tap, tap, tap, tap, and there he was, in the garage, practicing his [soccer] juggling,” Deacon says.

Initially, it looked like Stanley would represent Canada at the Paralympics in soccer. He was named Canada’s Para soccer player of the year in 2013 and 2014, and competed in track during the spring only to maintain his fitness for soccer.

After Canada’s Para soccer team failed to qualify for the 2016 Paralympics, however, Stanley switched his focus to making the Games in track and field instead. Training with Deacon, he would win a silver medal in his first international appearance for Canada.

“His identity is an athlete,” says Deacon, who adds Stanley is the ideal athlete for a coach—someone who never complains and runs exactly the time or distance that’s prescribed.

“His parents just got him into sports; they signed him up. It was like, ‘There is no excuse, we’re a sporting family, he’s going to play sports like the rest of us.’”

In December, Stanley set a T37—an impairment classification that includes athletes with movement and co-ordination problems in one half of the body—5,000-metre world record by 13 seconds on the track.

But Stanley doesn’t run for the fame or recognition, despite receiving an abundance of awards at the age of 23. He even tries to avoid looking at the poster of himself outside the track.

He runs because it brings him joy.

Sport has helped him cope and excel in life after his stroke—specifically, he says, playing in both Para and able-bodied sports. Throughout his youth at Glenlyon Norfolk School in Victoria, he competed in able-bodied sports, including basketball and rugby, alongside soccer.

“Through kindergarten, Grade 2, 3, 4, to today, really, I played [in able-bodied sports],” he says. “It adapted me well and is one of the main reasons why I’ve been the best in the world [in track] for the past couple of years. You pick up on their tendencies and movements.”

Although it can be hard to find motivation to train amid a pandemic, especially with rumours circulating about the fate of the Tokyo Olympics and Paralympics, Stanley is a firm believer about controlling what he can control: his running.

“I train as if [the Paralympics] are going to happen, whatever happens, so when they do happen I’ll be ready.”

Stanley isn’t outspoken, but his quiet demeanour and humbleness motivates those around him.

To Barber, who has also represented Canada internationally on the track, Stanley is a large inspiration in his own running career. He’s known Staney for about seven years and trains with him three times a week.

“Whenever I run with Liam, he has his own difficulties with running because of his stroke at birth,” Barber says.

While others may be on their phones or slacking off before a workout, Barber stretches and primes his legs to run—because that’s also what Stanley does.

“When I was born with my disability, I’m on the austic spectrum, but it’s like [watching] two different capabilities of what real athletes can produce.”

Running the race on pace

Approaching the final bend of the track, Stanley settles into a comfortable pace and swings into lane two, allowing the runners to pass.

Joe Robertson, a second pacer, guides them through the second lap in 64 seconds.

Barber and Venne then battle in the final lap. Barber pumps his arms like a pair of pistons in the homestretch behind Venne and crosses the finish in a time of three minutes and eight seconds—a new personal best.

With his hands on his head in disbelief, he jogs over to his father, Gary, watching on the sidelines.

“I loved your fight!” Gary says.

On a short row of bleachers adjacent to the track, Venne, who finished two second ahead of Barber, looks around for the pacers.

Stanley, having completed his pacing job, silently walks towards the group at the bleachers, waiting for instructions on the next part of his workout. A tower of light reflects down on him, magnifying the sweat steaming from his back into the cool, dark night.

Halle's most recent work, The Royals Next Door, has been optioned for a movie