Former Toronto mayor David Miller spends much of his time in Victoria nowadays. He is delivering a keynote speech on Wednesday at the Rising Economy conference. Photo submitted.

Capital Daily is part of the Trust Project
latestCOVID
TransportationBusiness
HousingGood News
Former Toronto mayor David Miller spends much of his time in Victoria nowadays. He is delivering a keynote speech on Wednesday at the Rising Economy conference. Photo submitted.

Most BC residents think pandemic was not managed well: independent review
Latest News
Q&A
Generally one-sided, lightly edited with no opportunity for response.

November 14, 2022
Get the news and events in Victoria, in your inbox every morning.
Thank you! Your submission has been received!
Oops! Something went wrong while submitting the form. 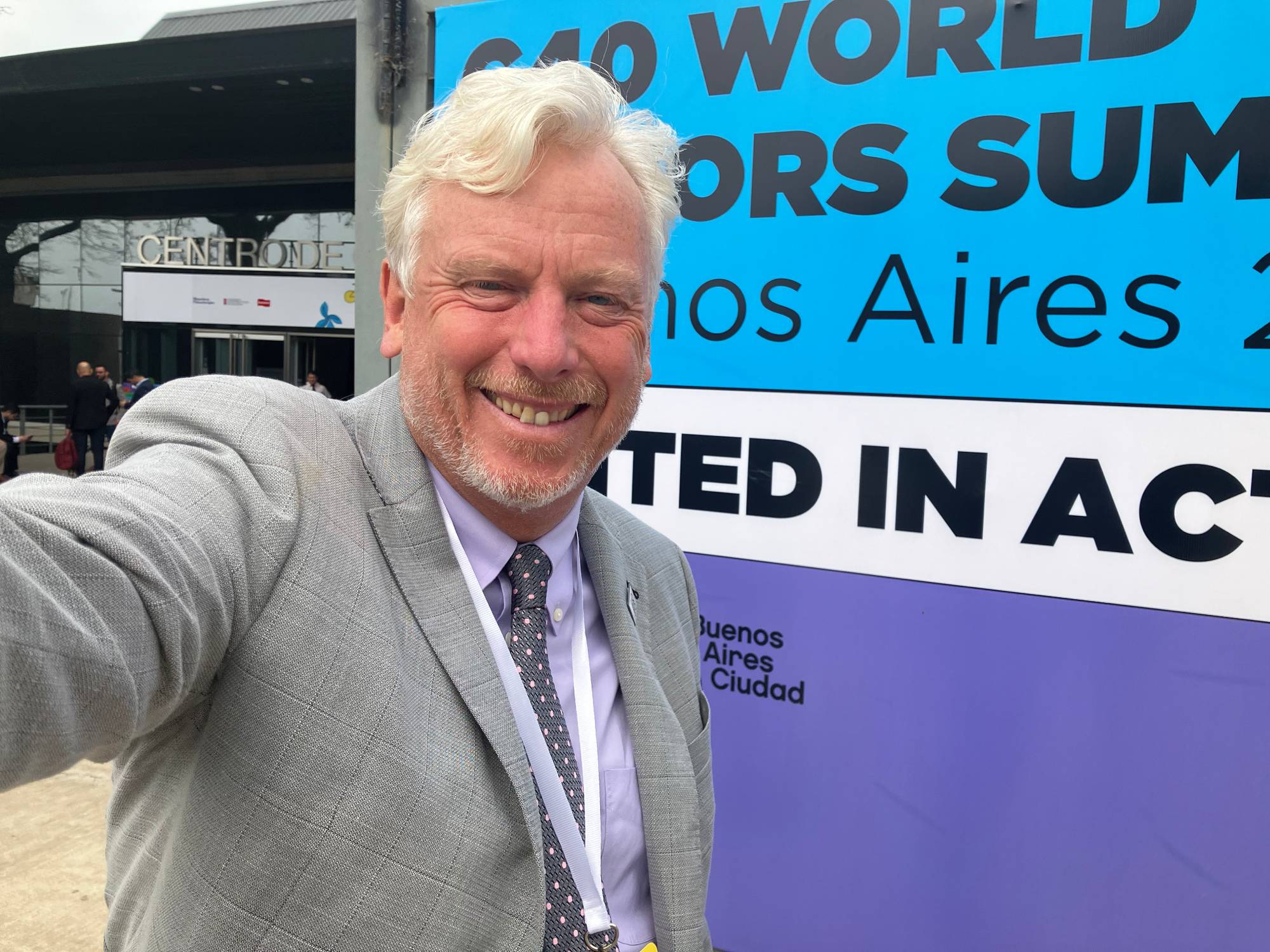 Former Toronto mayor David Miller spends much of his time in Victoria nowadays. He is delivering a keynote speech on Wednesday at the Rising Economy conference. Photo submitted.

Former Toronto mayor David Miller has spent much of his post-political career advocating for sustainable urban economies. He’s the author of the 2020 book Solved: How the World’s Great Cities are Fixing the Climate Crisis and a managing director of C40 Cities, a global network of mayors working together to respond to the climate crisis.

Although Miller hasn’t cut his ties to Toronto, where he served from 2003 to 2010, he spends most of his time these days in Victoria. He will deliver a keynote speech on Wednesday at the Rising Economy conference, taking place from Nov. 15-17 at the Songhees Wellness Centre. Capital Daily’s Tori Marlan spoke with him on Friday.

What brought you to Victoria?

I've been coming to Victoria virtually my entire adult life because my relatives on my mother's side live here. We have a long family history here, and the climate, the people, and the progressive environmental views all beckoned me and make me feel very happy here.

What will you be speaking about at the Rising Economy conference?

I'm going to speak to the current state of global action on climate change and the role that cities and city governments can have in helping avoid climate breakdown.

Let’s talk a bit about your book, Solved. The title stands out for its optimism, because we’re living in an age of climate anxiety, with dire warnings and bad news at every turn. This morning there was a headline in the Washington Post about the world now having only nine years to avert catastrophic warming. How do you stay optimistic?

It's hard. It's actually really hard. And one of the reasons I wrote the book was because I've had the opportunity to see the amazing and effective actions that are being taken in some of the world's major cities. And I wanted people to see what's happening, so they can both have optimism and also push in places where these measures aren't happening—to ensure that we take the best ideas that are being done somewhere and do them everywhere. And if we do that, there is an opportunity to roughly halve global emissions by 2030, which is what the science says is necessary.

But even since writing the book, that window is narrowing. We really need to accelerate the pace at which we're decarbonizing our cities, our societies, and our economy.

In an interview in 2021, in the trade publication The Planning Report, you said that more than 100 cities had committed to a path of more or less halving emissions by 2030. Are those cities on track as far as you know?

First of all, there are now over 1,000 cities. Are the 100 on track? Probably about two thirds of them are on track, which is really positive compared to national governments. It's clear that no one is doing more than cities. But we're not yet doing enough, because we need all those 1,000 cities and more to get on track very quickly.

There are some people who think local governments should stick to providing core services to their citizens and that straying outside their lane is a distraction. But your book argues that not only can and should cities play a role in tackling climate change, some are already taking significant steps to do so. Can you tell us a bit about how you came to that conclusion?

I vehemently disagree with the idea that it's a distraction. The decisions that local government makes about development, about transportation, about how it runs its own affairs have a huge impact on climate. So you can't pretend away that and wish that we lived in a world where the actions of local governments don’t matter. They do.

Vancouver's building code, for example, which is going to require essentially zero-carbon buildings to be built from 2030 onwards, leads the world. And that's a city-government action.

Whether we build sprawl-based societies or ones where you can meet your needs by walking, cycling, and public transit—those are all core responsibilities of city governments.

And I think the exciting thing is, we can actually build cities that are far better places to live, are more economically successful, are places where socially no one is left behind, and do that in a low-carbon way. And I say that with confidence, because there are examples all over the world of cities doing exactly that. The fundamental challenge is we need to do it really quickly because we've run out of time.

So what are some of the best practices that cities can adopt when it comes to emission reduction and climate action?

About 70%, depending how you measure it, of the world's greenhouse gasses come from urban areas. And it comes predominantly from four things: how we heat and cool buildings, how we generate our electricity, from transportation, and from waste management. So all around the world, there's significant leadership on all of those.

Secondly, the idea that cities should not just use their powers to plan for lower emissions, but should actually have a carbon budget that they stick to is starting to gain traction globally, led by Oslo, but also, interestingly, cities like Tshwane in Africa.

The third thing is a movement globally, from cities as far apart as Buenos Aires and Barcelona, to ensure that people can get all of their needs met—work, education,  shopping—within a reasonable distance of where they live. It’s called 15-minute cities. And it's about planning, which is a core function of cities.

You can see how you might apply that in the capital district here by ensuring that we densify where appropriate, and that we ensure that it's affordable to live in the urban areas.

Reducing emissions related to transportation is a priority for BC’s provincial government as well as some municipal governments. Transit often plays a significant role in discussions about reducing emissions. Can you talk about the importance of accessible and affordable transit when it comes to city and regional planning?

Accessible and affordable public transit is really critical, both to lowering emissions and having a society where everyone can be involved. And certainly this particular BC government has made transit funding and transit expansion a priority, as it should. And to me, transit is linked with how we build our cities.

Is our city built in a way that you can easily take transit or walk or cycle? Or do you have to take a car? And in the capital region, some parts of it are built that way; other parts, you really do probably need to take a car. And I think those are places that could benefit from thinking about how to develop a future around transit. How do you take the boom that's happened in Langford and ensure that people who live there can get around by transit as well as they can in Victoria and Saanich, for example.

In that 2021 interview I mentioned, you said that neither mayors nor cities can succeed in their climate action unless it appears to be equitable, and is equitable. Would you talk about equity, what it looks like, and why it’s connected to successful climate action at the city level?

The best city climate action considers the needs of everybody in a city, including the least well-off. And to know what those needs are, everybody needs to be included in the climate planning in the first place. So there's a role for listening, for community engagement, and then for outcomes that ensure that the economic success, which comes with a good climate plan, is shared and leaves no one behind.

So a good example might be Los Angeles, where they have as part of their climate strategy programs to subsidize low-income people to install solar panels on their housing, so they can have access to clean energy at a low cost. They have programs to train people from low-income neighbourhoods in the good jobs that are being created by programs to install solar, for example. They have a program to help people in low- income neighbourhoods car share with electric vehicles by subsidizing it. It's politically important, but it's also important substantively because the goal of a mayor is to ensure that a city succeeds for everyone.

Well, the last council took sort of tentative steps towards beginning to think about climate budgeting. So that's really positive and exciting.

More needs to be done. I know the new council and the mayor committed to doing it about housing, from an affordability perspective, but that's also a climate measure when people can live in more dense ways.

And also it's not often looked at I don't think in this context, but collectively in the thinking about promoting Victoria as a place to work and do business and a place to visit, there’s pretty significant discussion of sustainability. And that's really important. And I think we can be proud here of the leadership that's already happened on sustainability and many different aspects. It's really positive. But it's really important to recognize that, collectively, we need to accelerate climate action as much as we can. The science shows we're really at a tipping point, and we're running out of time.

—With files from Shannon Waters