AI and machine learning tools raise concerns over academic integrity in Victoria's educational systems
Agriculture
News
Based on facts either observed and verified firsthand by the reporter, or reported and verified from knowledgeable sources. 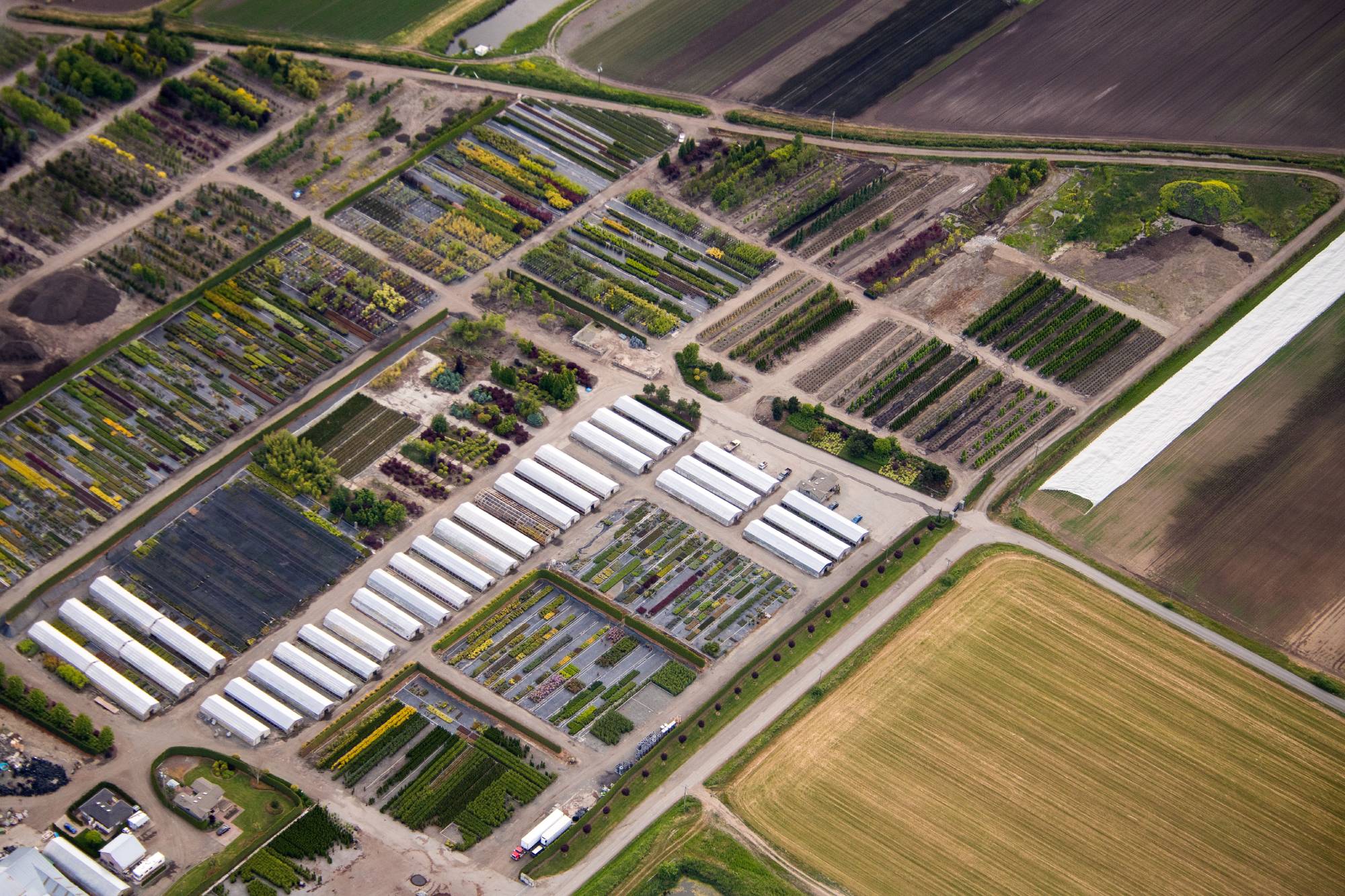 In mid-November, a dispute at a private North Saanich property came to a head.

The new owner of a three-acre wooded lot on Rosborough Road had bought the land over the summer with the intention of building a home and a riding ring. He had plans to cut down the second-growth trees on the property to make room.

Some neighbours resolutely opposed the plan, but nothing the property owner was doing was against the law. The property, on the Agricultural Land Reserve, is exempt from the district’s tree protection bylaw.

A group opposed to the private development sent out a petition to area residents, receiving over 100 signatures asking the new owner to keep the footprint of the new build as small as possible to save trees. They tried to find funding to buy the property from him. They searched for already-developed properties that the owner could buy instead. But the property owner wouldn’t budge.

Eventually, environmental activists gathered on the property, chaining themselves around trees, singing, and drumming. Police arrived and forcibly removed them.

In late November, the trees that had stood for more than 100 years began to fall. 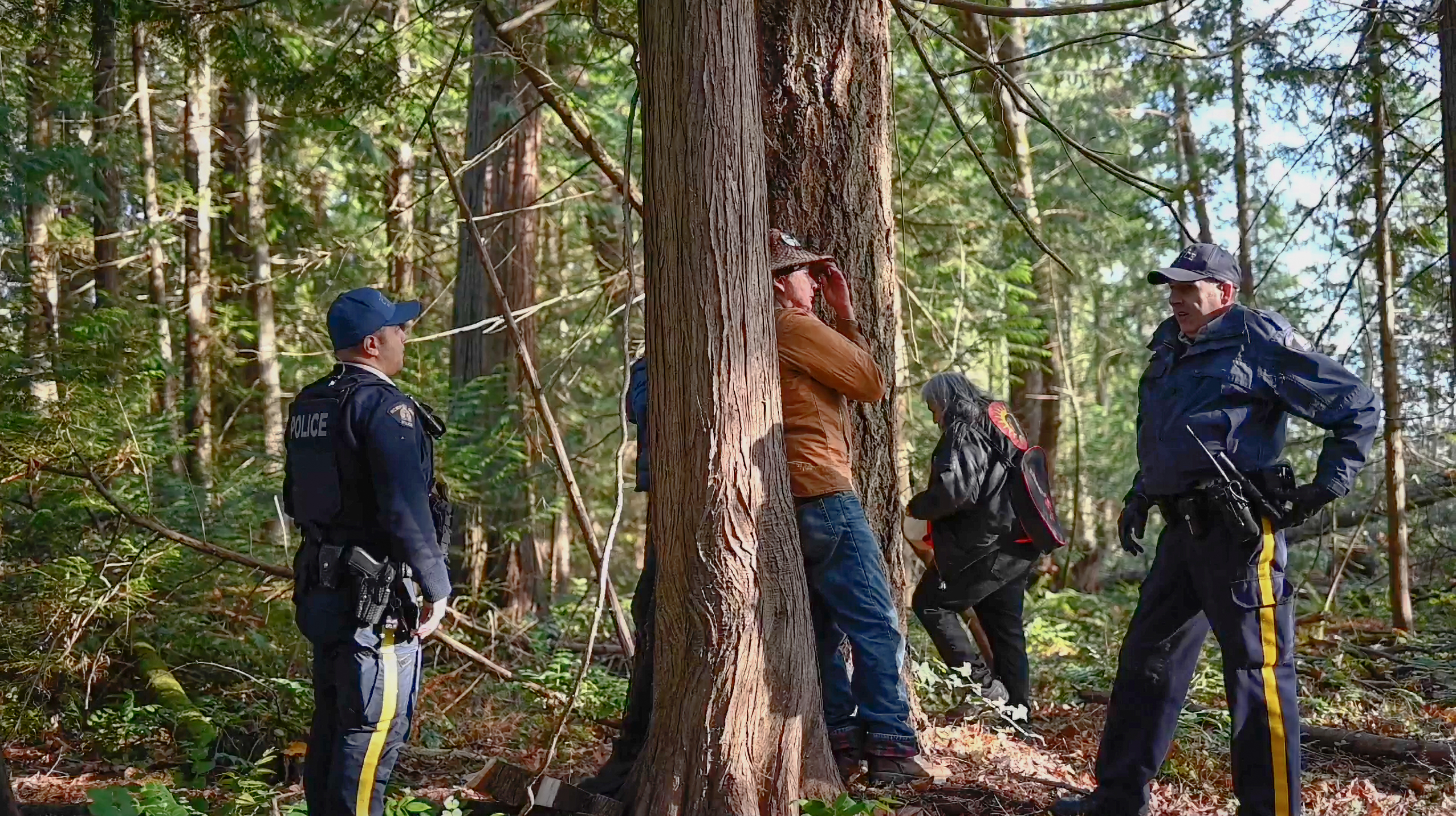 Police attend a protest on Nov. 19 on the property on Rosborough Road. Photo by Mike Graeme 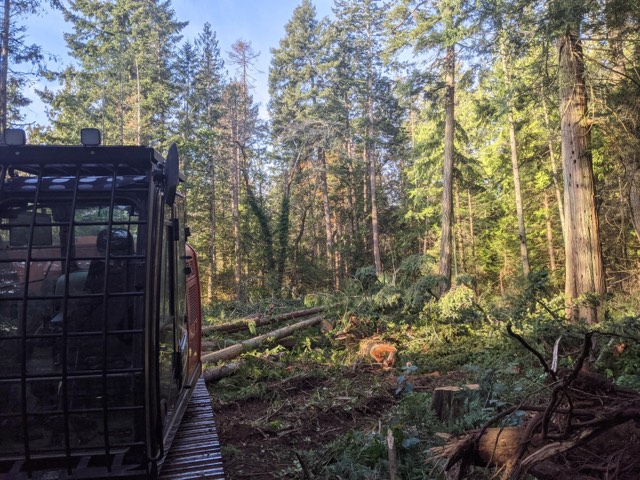 Trees are cut down on the property on Rosborough Road. Photo submitted.

Land under this zoning can’t be easily subdivided, and the ALR properties are exempt from municipal tree protection bylaws. But some say the ALR designation has too many loopholes that negate what it is trying to do.

Renate Herberger has lived in a cabin on a 3.17-acre property on Rosborough Road since 1985. For nearly that entire time, the property next to her had been an intact second-growth forest, with the owners living in the US. So when she found out that the property had been sold to a new owner in the summer and that he was planning to remove the trees, she was horrified.

“I have never know where the property line runs, nor did I ever want to know. To me, [the forest] is my fourth family. They’re my uncles, my aunts, my brothers, my sisters—it’s my family,” she said. “It never occurred to me that [someone] would show up and destroy it just because he had the money…I just assumed it was all protected.”

The property owner, Brad Rumball, did not respond to Capital Daily’s request for comment.

Former North Saanich councillor Jack Thornburgh says the trees on forested properties like this should be protected. The ALR regulations are in place to preserve and enhance agricultural land, but he questions whether all the acceptable agricultural uses are adding the intended value to the land.

“Essentially they have given carte blanche to some owners to just clear cut the forest if they put in an affidavit saying they’re going to use such and such amount of it for agricultural use. So it’s kind of the Wild West as far as the way ALR land can be used for purposes that essentially allow deforestation of the property if people want.”

Kim Grout, the CEO of the Agricultural Land Commission (ALC) said that the ALC Act—which governs ALRs and is drafted by the Ministry of Agriculture—is not meant to keep land in its natural state. Tree clearing, for example, is often the first step for preparing a property for agriculture.

“It doesn’t mean that protecting things in their natural state and farming can’t go hand in hand, but you’re not violating my act if you’re clearing trees,” she said. “The legislation is not focused on environmental impacts, it’s focused on utilization for agriculture.”

But Saanich councillor and farmer Nathalie Chambers argues that forests are just as important to farming as farmland, because they help enrich the soil, protect areas from erosion, and provide homes for pollinators and other animals that help nourish the land.

Allowing trees to come down, she says, is not only detrimental to the forest ecosystem, but to the surrounding lands being used for agricultural purposes.

The ALR designation has long been something that has baffled real estate analyst Leo Spalteholz. When driving around the Saanich peninsula he has noticed many large homes sitting on acres of ALR land with nary a chicken, cow, horse, or tractor in sight.

“In general, [the ALR is] clearly a good idea. We obviously don’t want to develop everything within sight, and then turn everything into sprawl,” Spalteholz said. “I really strongly believe that we need to be better at actually encouraging it to be used as farmland, and cracking down where I think there are some loopholes.”

But right now, the allowable agricultural uses on ALR land are very broad, he said, and farm class status is too easy to achieve.

“Just looking at a few properties around the Saanich Peninsula, for example, in many cases we see properties that have farm status, and yet are by no stretch of the imagination what we would traditionally associate to be farms,” he said.

ALR regulations are enforced by the ALC through a complaint-based system. Grout says the commission has six officers that work on enforcement for the entire province. From Dec. 1, 2021 to Dec. 1, 2022, there were 13 complaints in the CRD.

According to a 2019 CRD-commissioned report on the CRD’s food production lands, only 50% of ALR land in the district is being used for food production. “The ALR has helped stem the loss of farmland, but there is a need for further action to ensure that farmland is used for its intended purpose,” the authors wrote, calling the current underutilization of farmland a “lost regional opportunity.” And with more than half of the region’s farmers set to retire in the next 10 years, there is a growing concern that new farmers will be priced out of the area, and existing farmers will be unable to expand their businesses.

The report adds that property owners with no intention of farming can still obtain farm class status—which gives them a tax break—by leasing a small portion of their lands to farmers, for example. These properties are unlikely to become more productive.

“For the people who just want to put up a mansion and have a big estate, farmland is cheap because fundamentally the value is depressed by the fact that it’s ALR,” Spalteholz said. “Anytime you add a buyer group, you’re going to increase the cost of that land, right? So you’re now having farmers, actual farmers, compete with people that just want a lot of acreages for cheap.”

According to Statistics Canada, the Capital Region had 753 farms in 2021, the majority of which were sized under 10 acres. Since 2016, the region has lost 250 farms.

Across BC, 744,749 acres of farmland has been lost since 2001, according to Statistics Canada.

This is something that’s being seen across the country, as well. Across Canada, the total farm area dropped 3.2% between 2019 and 2021. While that percentage seems small, that’s a loss of 4.9 million acres.

This is something that Chambers’s husband, David Chambers, has seen first hand over his 25 years of farming at Madrona Farm on Blenkinsop Road.

“A large number of people who were extraordinarily talented and enthusiastic young growers who were pumping a lot of food into our local system have left the area,” he said. “They can’t afford to live here and a lot of time it’s just they cannot access land.”

Fewer farmers is a problem for local food production. Grocery prices in BC rose by 10% in 2022, deepening pandemic-induced concerns over food security on Vancouver Island.

“People are complaining a lot about food prices,” David Chambers said. “And you need to start really looking at your local production when you live in the one part of Canada where you can grow year round.”

In late November, before the trees on Rosborough Road were cut down, Thornburgh submitted a resolution to North Saanich council, asking the district to endorse a separate tree bylaw to apply to fully or mostly-forested ALR properties. Council agreed to send a letter to the Association of Vancouver Island and Coastal Communities.

During the meeting, Coun. Jack McClintock recalled a similar property near the hospital that was completely deforested, as allowed by the ALR regulations, but does not appear to be used for agricultural purposes.

“They can’t just say they’re going to use it for agricultural purposes and never return it to that; that’s a huge flaw, a huge loophole in the system,” he said.

Coun. Brett Smyth shared McClintock’s sentiment, adding that the ALR includes some land that, in his opinion, should not qualify as agricultural land, but as forested land.

“We need to help the [Agriculture Land Commission] find a better way because they haven’t quite got it right. And it is in our powers, it is in our hands.” 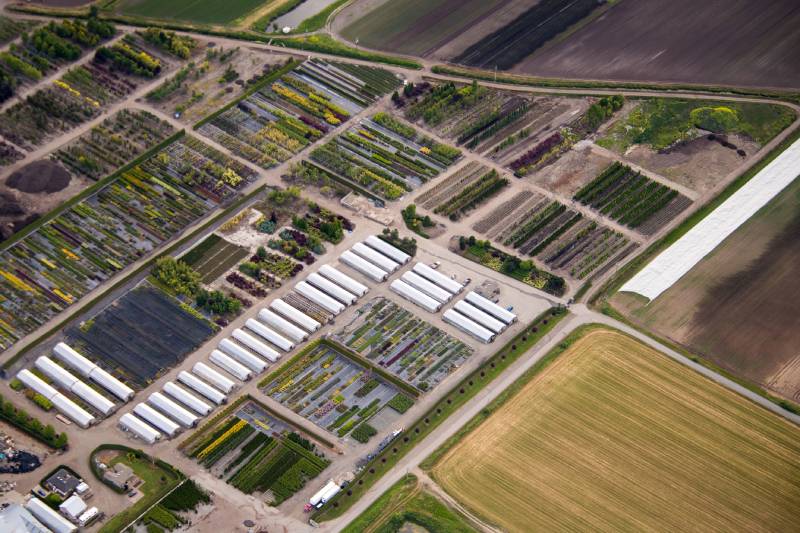 Only half of land zoned for agriculture is being used for food production. Some say the ALR regulations are to blame
No items found.