December 11, 2020
Get the news and events in Victoria, in your inbox every morning.
Thank you! Your submission has been received!
Oops! Something went wrong while submitting the form. 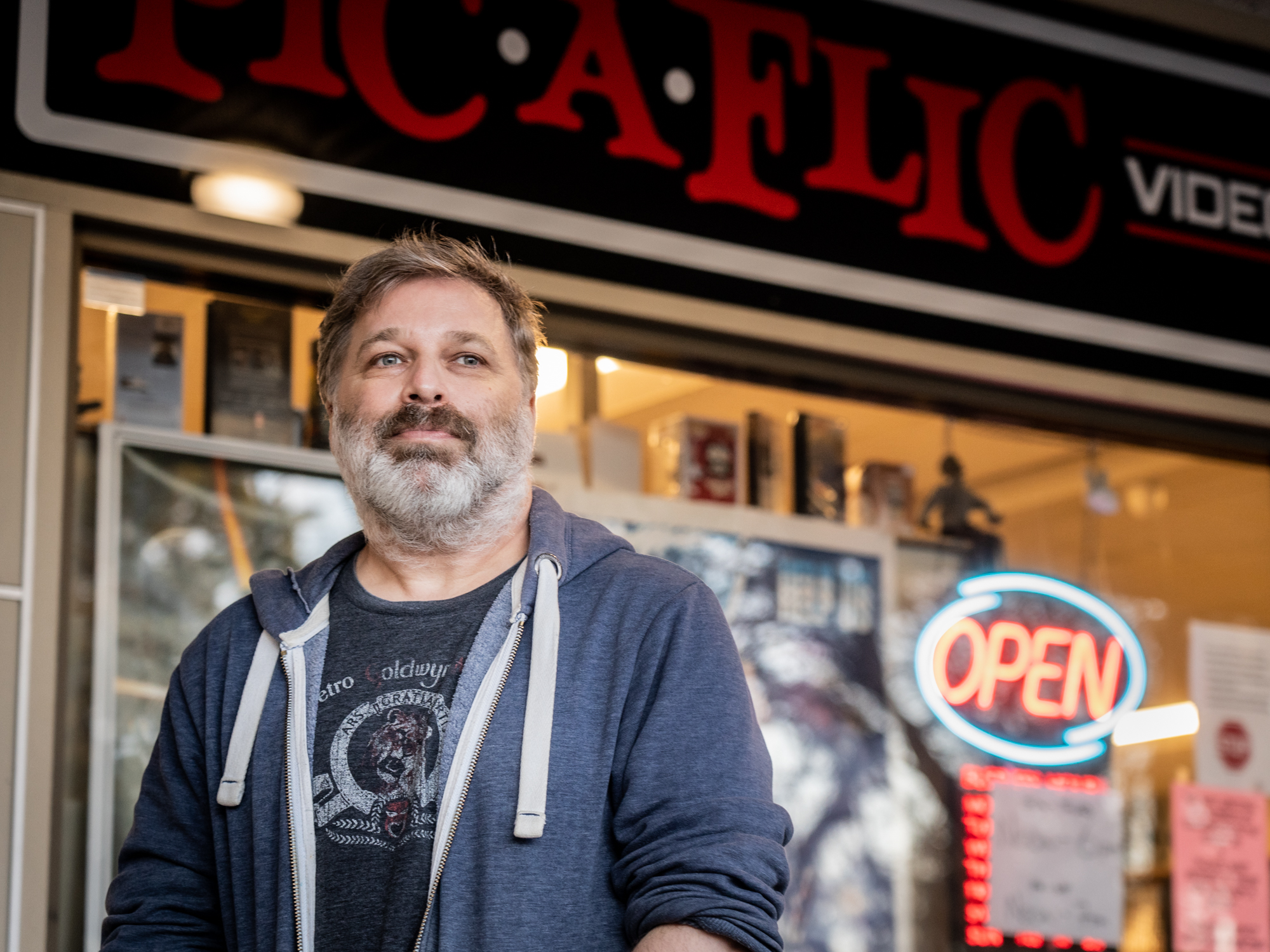 It was early in 2016 when the Victoria Times Colonist asked, of Pic-A-Flic, “Who in their right mind would buy a video-rental store in the age of Netflix and shomi and 24-hour-a-day on-demand movies?”

By the end of that year, shomi was gone. Whole streaming services, like Quibi, have come and gone in the intervening years.

Not that owner Kent Bendall doesn’t feel the pressure.

“Convenience is a powerful thing,” he said, jumping between speaking with me and helping a trickle of customers. “People can get any movie they want, apparently at the touch of a button sitting on their couch.”

People can’t get any movie they want at home though, not really anyway; while Netflix has just shy of 4,000 titles in Canada according to the website Finder.com, Pic-A-Flic has nearly 10 times that many. Of the best movies ever made (as rated by film magazine Sight & Sound), Netflix has a handful, while Pic-A-Flic not only has most of the movies, but has the expertise to point you toward them too.

As we chat, a woman walks in asking for “the one about the little kid with the lamp? And the leg?”

Bendall, without missing a beat, directs her toward A Christmas Story. I ask for a recommendation for a good sci-fi. A man walking the aisles calls out “Blade Runner.” Bendall rolls his eyes good-naturedly and recommends something “a little less common” — a mind-bending time-travel indie flick called Primer.

The ambience is that of a cool record store: punk reggae drifts over the PA, a vast collection awaits your perusal, and the customers desperately want to impress the staff.

That kind of cool factor may be the salvation of a store many have written off over the years as hopelessly outdated. Netflix doesn’t tease you if you binge Emily in Paris, sure, but it also doesn’t make you feel like part of the club if you get the cerebral titles in the Criterion collection — of which, boasts Emrys Damon Miller, who writes a newsletter for the store, Pic-a-Flic has more movies than the Criterion collection’s own streaming service.

Like any good book club, Pic-A-Flic has built a community around itself. People dodge one another, keeping a distance among its narrow aisles, get chatting about obscure films, and go home with something completely unexpected.

Shawn Kuemper—a long-time customer because of the selection of Russian ballet films his daughter loves—approaches to ask about the difference between two versions of Fast Times at Ridgemont High, a rather different speed of film from his usual. He joins in to offer his two cents about the place’s appeal: nostalgia.

“It’s almost like comfort food; it brings you back,” he said. “Just generations of doing something.”

The store has spanned every generation that has had the option of bringing movies home: it first opened in 1983, at the very start of the video-rental industry. It adapted to the advent of DVD—Bendall, then an employee, recalls being handed an inventory list from which to pick films to re-order in disc form—and the first wave of the streaming revolution.

“When [Netflix] first came to Canada, it levelled the entire industry of video stores pretty much overnight,” Bendall said. “Seventy percent of them closed within the next year.”

That put Bendall on a treadmill he’s been on ever since. When COVID-19 hit, it wasn't the novel cataclysm for him that it was for other businesses that aren't constantly staring down their own mortality. The pandemic was just another bump in a road that hasn't been paved in more than a decade. Still, Bendall admits it was a uniquely hard time; he had to cut staff and hours in the hopes of preserving the business. Had he been forced to shut down for an extended period he says he likely wouldn't have been able to reopen.

"I was thinking I’d have to close and that would be that," he said. "But people kept coming."

They weren't renting Contagion, the creepily prescient pandemic-themed horror flick. They've been coming for escapism, something less depressing than the reality of 2020.

“That’s their whole thing, you know, finding these obscure little faded pastimes they can latch onto,” he said. “And I mean that’s what we are—we’re a faded obscure pastime, but there’s still people who enjoy it.”

With the younger generation making up a small part of the clientele, there are whole demographics who cling to it for much more practical reasons. A woman holding a stack of Jack Ryan episodes explains that she prefers to be “off the grid,” not fed a set of movies determined by an algorithm. She refuses to give her name as she browses the sci-fi section. Others dislike the paradox of choice presented by thousands of titles with little to distinguish one from the next.

At first that choice overload may appear to be amplified in an environment like Pic-A-Flic, with its wall-to-wall titles. It is disorienting. But as I scan the shelves, movies pop up that I had been ruminating on anyway: the Mist, the Stephen King adaptation, catches my eye because I laughed just the other day over a parody about Ed Sheeran disappearing into the mist; Congo jumps out at me because my partner loves big-animal based thrillers; I suddenly remember I’ve been wanting to see Seven Samurai for years.

When the choices are made I feel excited about them, not resigned as I do after finally picking the least worst remaining option to stream at home.

With my five films in hand (it’s a Wednesday special; basically mandatory) I cautiously, hopefully approach the desk. As Bendall looks over my titles I study his face for approval.