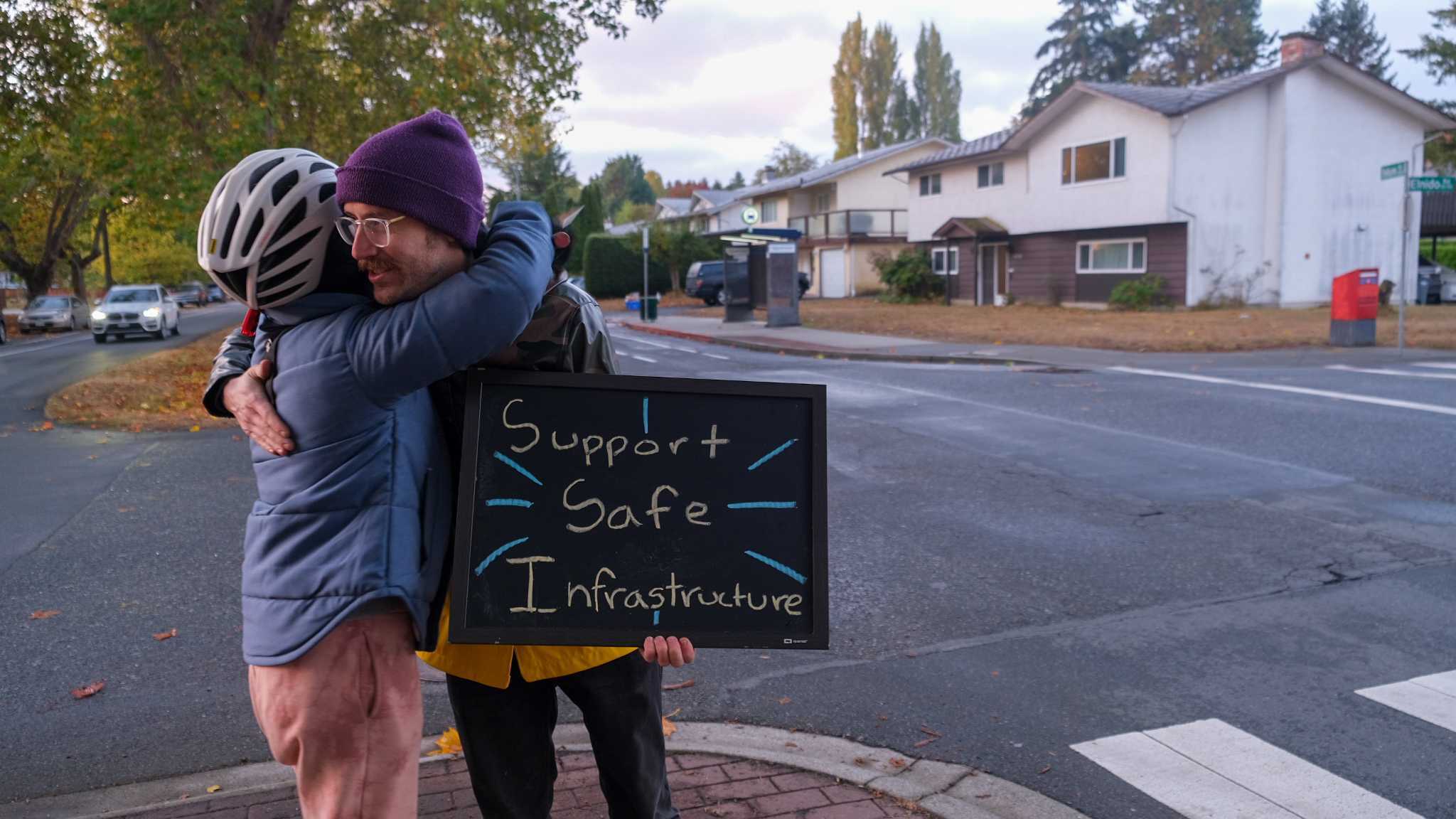 Saanich residents staged an early morning protest at the intersection of Shelbourne Street and San Juan Avenue on Wednesday, the same intersection where a driver hit an eight-year old on the way to school yesterday morning. The protesters are calling for the incoming mayor and council to address road safety issues in Saanich. There’s a lack of safety for children and other road users who aren’t in a car, said the protest’s organizer, road safety advocate Elise Cote.

The protest began at 7:20am—around the same time of day the child was hit while in the crosswalk. Police said the child was hospitalized with non-life threatening injuries.

Incoming mayor-elect Dean Murdock and returning Coun. Zac De Vries attended the event, as well as outgoing Couns. Rebecca Mersereau and Ned Taylor. At its peak, about 20 people were at the intersection, with some waving signs and asking for motorists to slow down.

In a press release sent out yesterday, Saanich Police say they believe the driver was driving under the speed limit.

In addition to asking drivers to “proceed with caution,” and to ensure their lights and wipers are working, the police reminded pedestrians to take more personal responsibility—wearing appropriate clothing and making eye contact with drivers—when approaching intersections, and blamed in part the seasonal increase in crashes.

“This time of year we do see an uptick in the number of collisions involving pedestrians, so the timing of this incident is, unfortunately, a good reminder to all road users to be extra vigilant when approaching intersections,” said Saanich Cst. Markus Anastasiades.

Cote primarily bikes and walks, a choice that they said was made in light of the climate change crises. It’s been difficult to do that as a parent of two young children, they said. “I’ve experienced road rage, trying to walk across the road in a marked intersection with a two-year-old.”

Cote told Capital Daily how her mother would walk to school by herself in Saanich everyday when she was a young child.

“I’m not even sure [that] when my child is 12, that I’ll let him walk to a friend’s house two blocks away,” said Cote. “It just seems unfathomable to me, because of the way that people drive and the amount of vehicles on the road.”

The city has seen an increasing car ownership, and newer cars can be heavier, taller, and larger than older models, with more blind spots, potentially leading to devastating collisions. A 2021 study by Consumer Reports pointed out the increased hazard particularly in pickup trucks: “[D]rivers have poorer front sight lines, creating a blind spot that can hide a pedestrian or smaller car right in front,” the report read, calling the trend “alarming.”

Earlier this month, a cyclist was hospitalized after being struck by a driver in a car with a trailer near Richmond Road and Cedar Hill cross road.

This September, a woman walking on a crosswalk at Cedar Hill Cross road and Iona Drive was hit by a driver in an SUV, sustaining serious injuries that required a hospital visit.

In June, a 17-year-old was hospitalized in critical condition after being struck in a crosswalk by a driver going through the Burnside Road West and Wascana Street intersection.

And last year in December, 16-year-old Kaydence Bourque was struck and killed near his home by a driver in a pickup truck towing a trailer. Bourque was in a marked crosswalk at the intersection of Cedar Hill Cross Road and Merriman Drive. That particular crosswalk also saw a cyclist injured after being hit by a pickup truck before improvements were made to that area.

The string of incidents is sparking an increase in interest in road safety in the car-heavy community, and whose safety, convenience, and accessibility is prioritized in planning decisions.

“I think there is a bigger conversation about the use of roads,” said Murdock. “They are not just vehicle corridors.”

“As the new incoming mayor, I want to work with council to prioritize road safety improvements, so that we know our kids are going to be able to get around safely in the community,” said Murdock told Capital Daily at the early morning protest. The father of two lives nearby and his children go to schools in the area. “It could easily have been my child in the crosswalk yesterday,” he added.

Murdock said that he showed up to support the family that was affected and to show his commitment to improving road safety. Before becoming mayor, Murdock founded a road safety advocacy group, Better Mobility Saanich. Part of his mayoral campaign focused on creating accessible and walkable neighbourhoods in a municipality that has been criticized for its lack of sidewalks in particular—even earning the dubious honour of being the home of the “jankiest” sidewalk in Greater Victoria.

Saanich has made commitments to move towards Vision Zero, a plan to eliminate all traffic injuries and fatalities for road users, regardless of transportation mode. But de Vries says that move should happen faster: the completion of Saanich’s active transportation plan needs to be sped up from 25 years down to 15, he said.

“I really hope that these new councillors—and returning councillors—follow through on their commitment to road safety, and that it's not just lip service,” he said. “Our hope is to eliminate this sort of tragedy.”

The section of Shelbourne street intersecting San Juan Avenue is long and straight. There’s nothing to physically prevent a car from going 60 or 80 km/h down the street, said Phillip Marciniak, an attendee at the protest.

“Right now, we’re standing in what is probably one of the better crosswalks in Saanich,” said Marciniak. “It's painted, it's got lights on it, it's got a centre island,” he said.

Marciniak wants crosswalks to be raised in Saanich, starting with the intersections that see the highest risk. “A raised crosswalk here would force drivers to always slow down when they approach this crosswalk,” he said.

Murdock said solutions don't always have to be expensive, high cost infrastructure like a raised crosswalk.

“We can quickly deploy infrastructure that would improve safety,” Murdock said.

“They can be some of the lower cost improvements that will just ensure that we're significantly contributing to a safer walking and biking environment for people.”

There are about five kilometres of quick-build road improvements—like using bollards and prefabricated concrete barriers to create bike lanes—that have been put on pause by the current Saanich council, de Vries said. “Council needs to unpause those immediately and let staff get to work on these important initiatives,” he said.

Not everyone agreed with the aims of the protest. One driver in a pickup truck slowed down to ask protestors if this was the intersection where the child was hit before shouting, “Maybe next time, you guys can vote for people who will fucking improve infrastructure, asshole!” and driving away. Another car visibly accelerated after entering the intersection.

The rage that some drivers experience is not an inevitable outcome of driving, Cote believes, but a product of the way roads are built.