How a Victoria choir is helping people living with dementia
Business
News
Based on facts either observed and verified firsthand by the reporter, or reported and verified from knowledgeable sources.

September 25, 2021
Get the news and events in Victoria, in your inbox every morning.
Thank you! Your submission has been received!
Oops! Something went wrong while submitting the form. 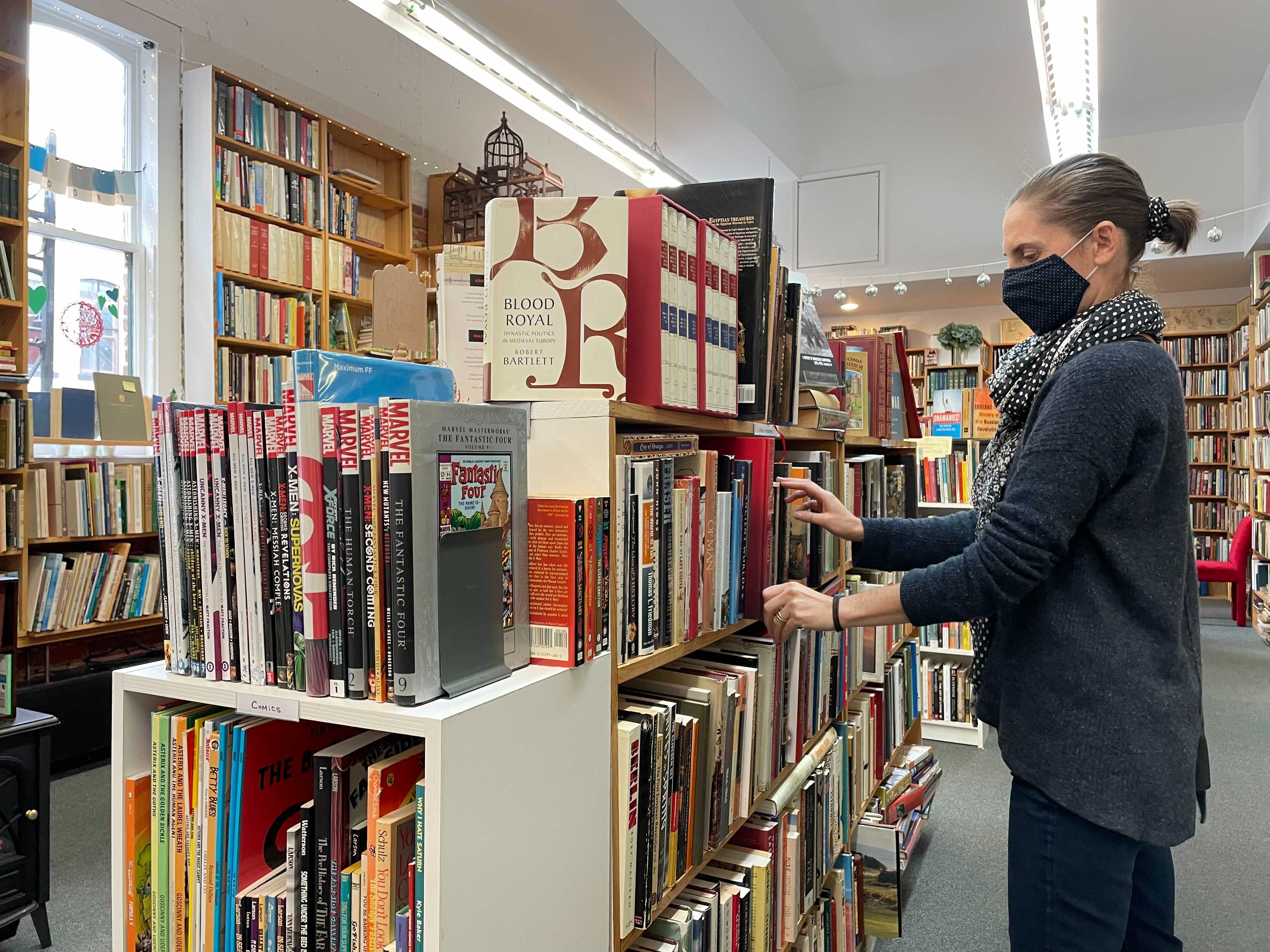 Alex Cruikshank was tallying up a customer’s purchases at the checkout desk of Bastion Books when she recognized her mom’s handwriting in one of the books.

She laughed quietly behind her mask, remembering what her 82-year-old mom, who used to manage Poor Richard’s Books in North Park, told her over four years ago: “Don’t buy a bookstore, that’s crazy!”

Before September 2017, the space that Bastion Books now occupies—its door is tucked away in Commercial Alley within Bastion Square—was filled by Renaissance Books, a second-hand bookstore that was looking to sell their stock and close up shop.

“It was just sort of like serendipity,” Cruikshank said. After growing up surrounded by books, she had just spent the last 15 years working in marketing and was looking for a way back to the shelves.

That was one of the reasons why Cruikshank decided to buy up Renaissance Books’ shelf stock and take over the store herself, renaming it ‘Bastion Books.’ The other reason was to make sure bookstores didn’t disappear from downtown, which seemed like a very real possibility at the time.

Back in the 90s, she says, there was a generation of booksellers in Victoria—her mom among them—who wanted to retire, and either sold their stores or closed up shop altogether. Some families remain prominent names in the local bookstore market. The Russell family (of Russell Books) are now third generation booksellers, and the late Jim Munro (of Munro’s Books) left his store to a group of long-time employees when he retired in 2014. Stephanie Bolen, meanwhile, still runs her mother’s Bolen Books in Hillside Mall.

“It’s not an easy job to do once you get to a certain age,” Cruikshank said. “The other thing is that there's just not that much money in bookselling. As rents increase, you have to sell that many more books… if you go online, then you're not paying commercial rents for a brick-and-mortar store.”

In the beginning, the shelves contained a lot of what you’d find at Renaissance Books, but as time went on, Bastion Books took on a personality of its own: for example, to keep reading accessible to all, she decided to keep an inventory of mostly second-hand books. And many of those books have stories beyond what’s in their pages.

Luck of the draw

A few years ago, Cruikshank got a call from the family of a retired philosophy professor who had inherited his books. After the family had gone through and taken what they wanted from the collection, they wanted to sell the rest to Bastion Books.

“The deal was all-or-nothing and we purchased like 35 to 50 boxes full of just philosophy books,” she said. With the help of her family, Cruikshank rearranged the store to be able to fit a whole new Philosophy section. It was worth it, she said, because many of her customers had been asking for philosophy books.

Their architecture section has a similar story. A local architect was moving and wanted to sell around 20 boxes of architecture books. Knowing that several customers had been looking for specialist literature on architecture, Cruikshank immediately bought them up and made space in the store for the new collection.

Every book that goes on the shelves at Bastion Books has been carefully checked over and curated by Cruikshank, who knows which books to select and buy from any collection based on what her customers have told her they want.

Unlike a new bookstore, where employees can go to a distributor’s website to order books to intentionally stock, second hand bookstores rely on used books often sold to them at random. Sometimes, Cruikshank says, people will try to email her a picture of their collection or send her copyright information to set the price on their books, but she never buys anything sight unseen.

“When you get to older books, the title and copyright date don't really help,” she explained. “In the early 1900s, often the same publisher would publish multiple versions of the same book.”

A cloth version, a leather version, and a premium gilt-edged version of the same book would have the same copyright date, but they would all have different values that would need to be assessed before it can be bought.

Some people might have books or entire collections that smell like smoke or ones that smell musty which could indicate the presence of mold—none of these end up on the shelves at Bastion.

Other than snatching up whatever niche specialist books her customers have asked for, Cruikshank makes sure to stock up on classics—popular among university students at the start of each semester—as well as fiction and local history books, since she came to find that newcomers to Victoria have an appetite for learning more about the city.

“Sometimes… if we feel it's important to have it on the shelf, we will buy new copies of books, just to make sure that we're filling that void,” she says, referring to recent movements that caused a surge in demand for books by BIPOC authors and books about residential schools. “But the rest of the time is really just luck of the draw.”

Over the course of the pandemic, she noticed more and more people were asking for directions to Dickens, Dostoevsky and Solzhenitsyn books. The pattern struck Cruikshank as an odd one—considering the heavy nature of global events, she’d expected people to be more interested in light-hearted tales.

Finally, she asked someone why. They explained: “As bad as things are here, it’s never as bad as in a Dickens novel.”

True to its name, Bastion Books has stood almost unmarred by 18 months of a global pandemic.

Cruikshank closed the store from mid-March to mid-May in 2020—the same time restaurants and other businesses were ordered to close—while the provincial health officer was encouraging everyone to stay home. But she didn’t put her feet up: she used that time to finally create a website for the business to let her clients order books and have them delivered.

Before reopening the brick-and-mortar store, they tidied up the place, installed a plastic barrier at checkout, a hand sanitizer dispenser at the door, put a limit on the number of customers who could be inside at any time and made room for them to distance. Later, when masks were made mandatory, a sign went up in the store asking Bastion’s customers to don one before entering.

But fortunately, business didn’t suffer due to the pandemic—in fact, summer 2020 was a busier one than expected given the lack of the usual tourist-laden cruise ships in Victoria.

“Because people couldn't really travel, a lot of people who lived within BC who'd never been to Victoria had come over to sort of feel like they were having a vacation without being able to go further afield,” Cruikshank said.

For now, the store is run mainly by Cruikshank alone, with the help of her mother who comes in after hours, her partner, and sometimes her 10-year-old son. Outside summer months, there’s a loyal base of customers keeping Cruikshank busy but able to comfortably manage everything herself. Next summer though, she hopes to hire an employee to help manage the usual seasonal rush.

Bastion Books was named with longevity in mind. Cruikshank says she specifically called it “Bastion Books” and not “Bastion Square Books” so that if the store ever needed to move to a different location—due to high rents or other unforeseen circumstances—its name wouldn’t limit them to Bastion Square.

Somewhere down the road, the store could even be taken over by Cruikshank’s 10-year-old. “He insists, ‘no.’ He wants to be a professional baseball player,” she laughs. “But you never know, in 20 or 30 years, he might change his mind.”

Correction on March 22 at 11am: A previous version of this article said Cruikshank's mom was the owner of Poor Richard's Books. She was the manager.