July 21, 2021
Get the news and events in Victoria, in your inbox every morning.
Thank you! Your submission has been received!
Oops! Something went wrong while submitting the form. 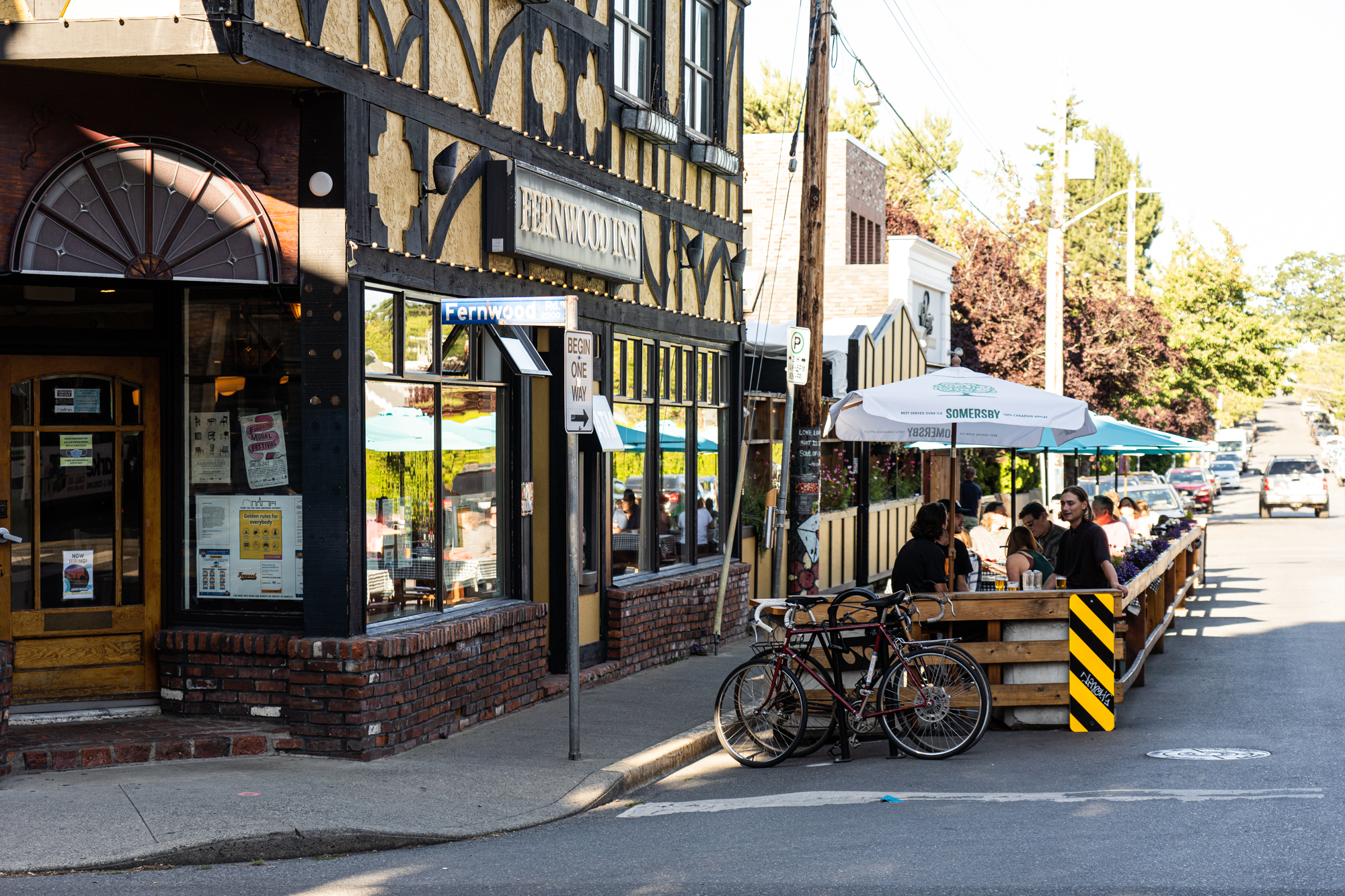 On another sunny July morning in the heart of Fernwood Village, a dozen guests sat with coffee and cookies on two adjacent sides of Gladstone Avenue.

Conversations ebbed and flowed, momentarily peaking in volume to combat the noise of delivery trucks on neighbouring Fernwood Road, and a single lane of traffic was allowed to flow past the patios that edged out to cover half the street.

The Gladstone street patio was implemented last summer by local businesses in collaboration with the city of Victoria’s “Build Back Victoria” program that aimed to help them cope through the pandemic.

Throughout the pandemic, more than 100 patios were established in Victoria.

Now, as the policy on street patios is set to expire in October, there’s a chance they could become permanent fixtures in the city.

Earlier this month, city council approved the pandemic-initiated Fernwood Village street patio as the first in a pilot project that will look to make other patios in the city permanent.

“It’s been 18 months of dealing with COVID and the damage it has done to businesses. It will take years to build back businesses around town, [patios] will be able to let them get some cash in the bank and pay off government loans,” said Mike Colwill, owner of the Fernwood Inn, who led the charge to make the street patio permanent on the 1300 block of Gladstone.

In a letter to council in June, citing the economic impact and increased community vibrancy from patios, Colwill and other restaurant owners in Fernwood Square asked the city to vote on permanently extending the policy on travel lanes and full roadways past the fall.

“Because we’ve trimmed down our seating inside, that’s been taken away, but we got back to add those seats outside. So, it actually puts us to our normal capacity.”

Throughout the waves of pandemic restrictions, outdoor patios have been seen as a way to keep businesses afloat and safely dine customers.

In 2020, Victoria city staff initially shut down a segment of Broad Street downtown to allow for physically distanced dining and walkways. After the success from last summer, and a petition led by eight businesses in the area to permanently close the block to street traffic, city council voted to keep the block closed throughout the rest of 2021.

“This only came about during COVID,” said Dave Listhaeghe, owner of Stage Wine Bar in Fernwood. “It did keep us afloat for a while, especially with the last shutdown in March; if it wasn’t for the [patios] it would have been a lot harder [to cope].”

The trend isn’t just isolated to businesses in Victoria. In June, the province of BC said restaurants—which made up over 2,000 of the pandemic patios—could apply to keep them.

In Toronto, the city renewed a patio program that allowed restaurants to move into road lanes in sidewalks in February, and the city’s mayor said they should become a lasting seasonal policy.

Three months ago, in Nelson, BC, councillors voted to approve construction on a permanent hotel patio that would take up half of the sidewalk on a downtown street.

“The real overarching benefit has been the sense of community that it has formed,” Colwill said. “You got neighbours hanging out with neighbours, friends seeing friends walking by; there’s basically people out on these tables from 6:30 or 7:00 in the morning until sundown.”

With the Fernwood pilot project moving forward, questions remain on the long-term integration of public patios.

Patios were viewed as a short-term way to keep businesses afloat when the pandemic restrictions began. As business folks and the city look to keep their patios permanent, there are structural and legislative answers that need to be regulated.

“It was ‘get something up so they can operate,’” says Jeff Bray, executive director of the Downtown Victoria Business Association.

There’s two specific factors that need to be taken into account for the permanent installation of patios, Bray says: accessibility for folks with disabilities and transparency between the city and businesses.

Specifically, he hopes the city doesn’t overlook the need for businesses to remain viable while they obey safety regulations.

“Obviously if you’re going to have heaters they need to be done safely, a fire inspector needs to check on them,” he said. “But be realistic. I don’t want to be sitting out there at Pagliacci’s at the end of September in the driving rain, but if they have plexiglass that slides up and down and acts as a rain buffer, great!”

While patios can be engaging avenues to attract locals and tourists, Bray says, rules around alcohol, permits, and how they impact street congestion also need to be taken into consideration.

While the Broad Street closure eliminated a small connecting roadway and parking spots, there was still a parkade nearby. For patios and business on Government Street, however, he counters, the street’s function as a through-road to other parts of downtown should be weighed.

“You need to make sure they can access downtown reasonably well,” Bray said. “But there’s the other aspect of how businesses operate: deliveries. How do you get a delivery if your road’s closed?”

Sharmarke Dubow, the Victoria councillor who brought the Fernwood pilot and permanent street patio motion to council, said the project came to light from listening to Fernwood business owners.

As a councillor, he felt like it was necessary to draw attention to the impact of potentially altering streets to make room for patios, and extend benefits created through Build Back Victoria past its October expiration date.

On Jun. 15, the provincial government passed a rule that allowed for the temporary patio licenses to continue selling liquor until June 2022. Victoria Mayor Lisa Helps said to the Times Colonist that she expects staff will recommend extending the pandemic policy on patios until June 2022 as well.

In the transition from temporary to permanent patios, Bray says, the provincial government—which facilitates the liquor license process—will need to work together with cities and businesses to ensure that prospective patio owners are able to secure permanent alcohol licenses to distribute liquor next year.

“If I can’t even get my liquor license, I’m not building a patio, or most won’t,” Bray said.

Now that the Fernwood pilot has been launched, Dubow says, council asked city staff to report back at a later date on issues related to making pandemic patios permanent, including liquor licensing, accessibility, and transportation.

While COVID-19 has disrupted much for many folks, Bray believes it allowed for experimentation and a chance to reinvigorate Victoria in the years following the pandemic.

“I think people discovered [patios] last year, and even though some of them are makeshift, they loved the vibe,” he said.

“Downtown’s booming, and I think patios are one of the single biggest reasons for that.”

Correction on Jul. 22 at 7:45 am: The Victoria program is called "Build Back Victoria" not "Build Back Better" as was previously stated. Furthermore, city council, not staff, decided to keep Broad Street open.