July 10, 2021
Get the news and events in Victoria, in your inbox every morning.
Thank you! Your submission has been received!
Oops! Something went wrong while submitting the form. 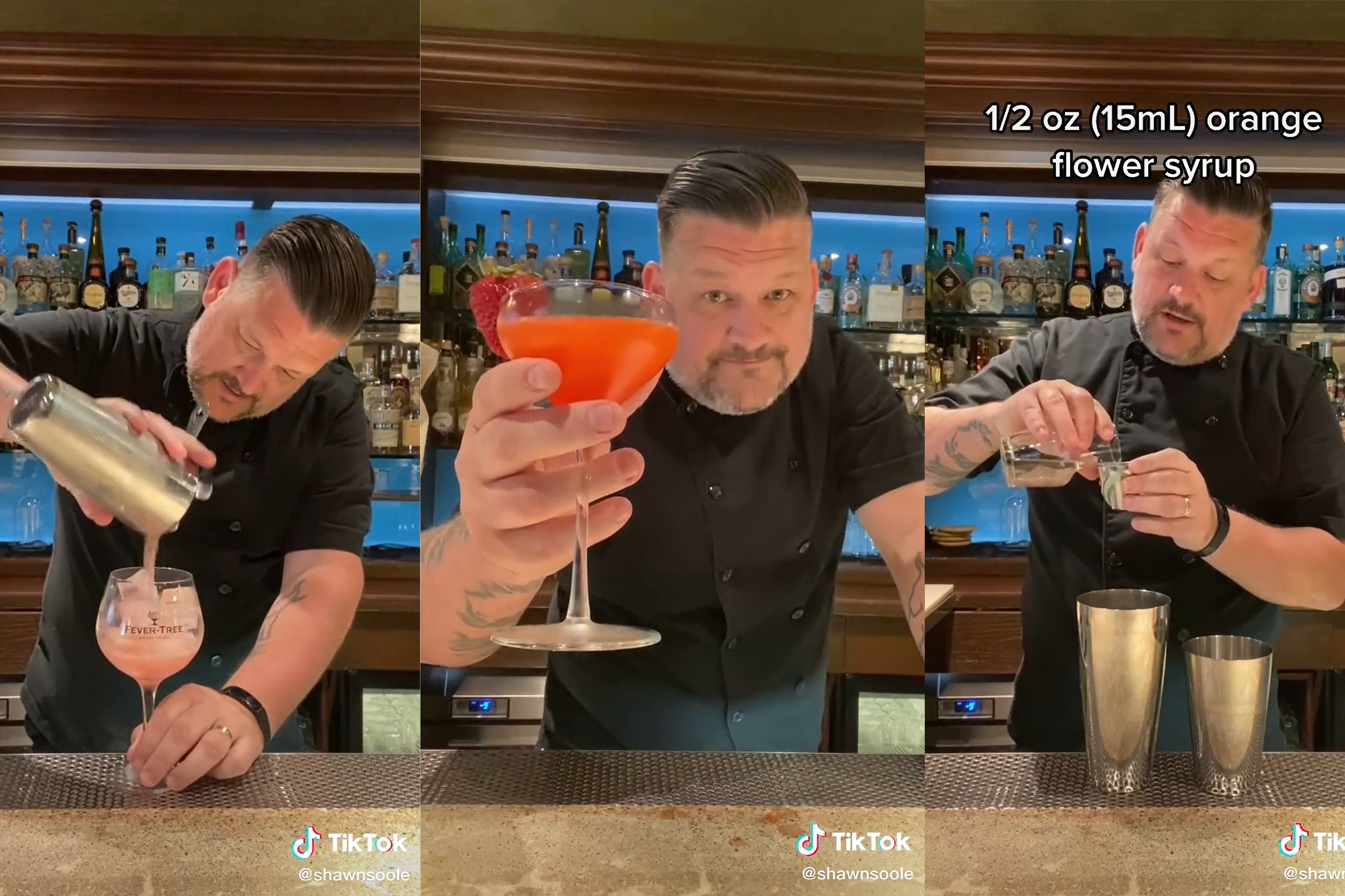 On the last Saturday in June, Shawn Soole was working at his downtown bar, Clive’s Classic Lounge, when a mother and daughter asked him to make a drink.

The daughter, who had just turned 19, recognized Soole from the internet and wanted one of his popular martinis, the Lemon Drop—a sweet vodka drink that tastes like the sugared candy it's named after.

As the bar manager at Clive’s and owner of his own hospitality consultant business, Soole is no stranger to drink requests or the late-night industry. He’s co-authored two books, hosted a hospitality podcast, and launched a popular bar and restaurant, Little Jumbo, in Victoria.

On this night, though, it was one of his newest projects that brought the mother and daughter to his lounge: TikTok.

“They ordered the Lemon Drop, which is one of my most popular videos [with over 144,000 likes], because that’s what she really wanted to do,” Soole said.

Soole began a TikTok account in December 2019 to document his mixology background and teach one-minute drink recipes to aspiring bartenders or folks who wanted to make their own cocktails at home.

As a relatively new social media app, he believes TikTok’s focus on do-it-yourself videos is a more conducive way to broadcast the unpolished personality of entrepreneurs and businesses.

When Soole’s creating a video, he sets up a gimbal on three milk crates and an old sour cream bucket. He’ll then edit the videos in his phone’s images tab before publishing them to his thousands of followers.

“I think that’s what TikTok has going for it, it’s raw and authentic,” Soole says. “I count down five seconds before I start, I do my minute, and I literally go look at my photos, edit them, go ‘chop, chop,’ and then post it.”

“That is mental. I’ve literally written books, been on TV, done all this stuff, and TikTok is the thing where people come up to me once a week at the bar and are like, ‘Hey, I really like your TikToks.’”

Tiktok was founded as “Douyin” in China in September 2016. Since its inception, TikTok has been downloaded more than two billion times across the world, and was the most downloaded app in 2020.

Initially popular as a sing and dance app for teens and youth, adult interest in TikTok has been on the rise as well in recent years. American adults using the app doubled from 7.2 to 14.3 million users from September 2018 to March 2019.

While the app has quickly found success, controversy has also arisen around its Chinese ownership and potential ties with the Chinese Communist Party. In 2019, TikTok briefly took down a video posted by an American teenager who discussed China’s treatment of minority Uyghurs in the northwest part of the country.

TikTok has repeatedly denied any involvement with the Chinese government, and entrepreneurs and businesses alike have continued to use the app.

One example of someone who has used the app to their benefit is a woman who goes by the nickname, CryptoWendyO. Last month, the Washington Post profiled the Los Angeles-based influencer who uses TikTok to share her knowledge of cryptocurrency and global markets for a younger audience.

The data marketing company WARC reported in 2020 that TikTok had the highest level of user engagement for Canadians. TikTok users north of the border spent 17 hours on average per month on the app, overtaking Facebook as the most consumed social media app.

The Globe and Mail also reported this year that TikTok helped job seekers and companies find employment opportunities in Canada. To build on that interest, TikTok hired a Canadian general manager and set up a headquarters in Toronto last year.

“It’s the new thing, and it’s just giving everybody a creative outlet in a different sense: having to use video,” said Tami Tate, CEO of the Victoria-based social media strategy and marketing company 365 Day Media Group.

Whereas Facebook is used more as a web page businesses, and Instagram was started as a way to share photos, Tate says, TikTok’s 15-second to one-minute long video format fills a new need for aspiring creators that was once occupied by the now-defunct social media app Vine.

Will TikTok be used by more Greater Victoria businesses?

She adds that Dave Jorgenson, who runs the Washington Post’s TikTok account, was an inspiration behind the university’s decision to join the app.

Jorgenson has received widespread fame for breaking down news stories in short videos, and Baggott hopes they will be able to use TikTok to similarly discuss serious topics—such as conversations around the importance of Pride month—and lighthearted content.

“The biggest difference for me is that TikTok is so authentic,” she says.

While Canada Basketball recently launched a TikTok account ahead of the FIBA Olympic Qualifiers in Victoria, and individual content creators in the region have found success on the app, both Tate and Soole aren’t familiar with many other Victoria-based businesses who use TikTok yet.

Tate, specifically, says the costs and creativity it takes to produce videos on the app may be a big reason why it hasn’t become a common feature for all businesses in the area.

“I don’t think it’s even just Victoria businesses, I think it’s many businesses—putting a picture up is super simple if you’re wanting to do an Instagram picture,” Tate says.

“But lots of businesses even struggle with that. It’s why I have so many clients [over one dozen], because they don’t have the time. So to put a TikTok together, even though it looks like it takes nothing, for a business it’s a lot of work.”

However, despite the challenges of hiring staff and coming up with creative videos, Tate and Soole believe the app will become more of a trend for businesses to use in the years to come. Tate notes that it will be interesting to track TikTok’s growth in the future as its shine, eventually, wears off.

“It’s had such a fast and furious rise,” Tate says. “It will be interesting to see if they can maintain that… Everybody likes to have the new thing, this is the shiny object right now.”

Regardless, Soole says it’s important for companies to keep up with the latest social media trends as that’s where a majority of the attention is in today’s society.

“I don’t put a lot of weight into banner ads, billboards on the side of a highway, or radio ads,” he says.

“Because how many people listen to the radio?... For me, [social media] is where the attention is.”

Inside Bolen Books' four-plus decades of success in Victoria