A pink salmon swims in the Nanaimo River in early October. Photo submitted by Katie Schulze

October 13, 2022
Get the news and events in Victoria, in your inbox every morning.
Thank you! Your submission has been received!
Oops! Something went wrong while submitting the form. 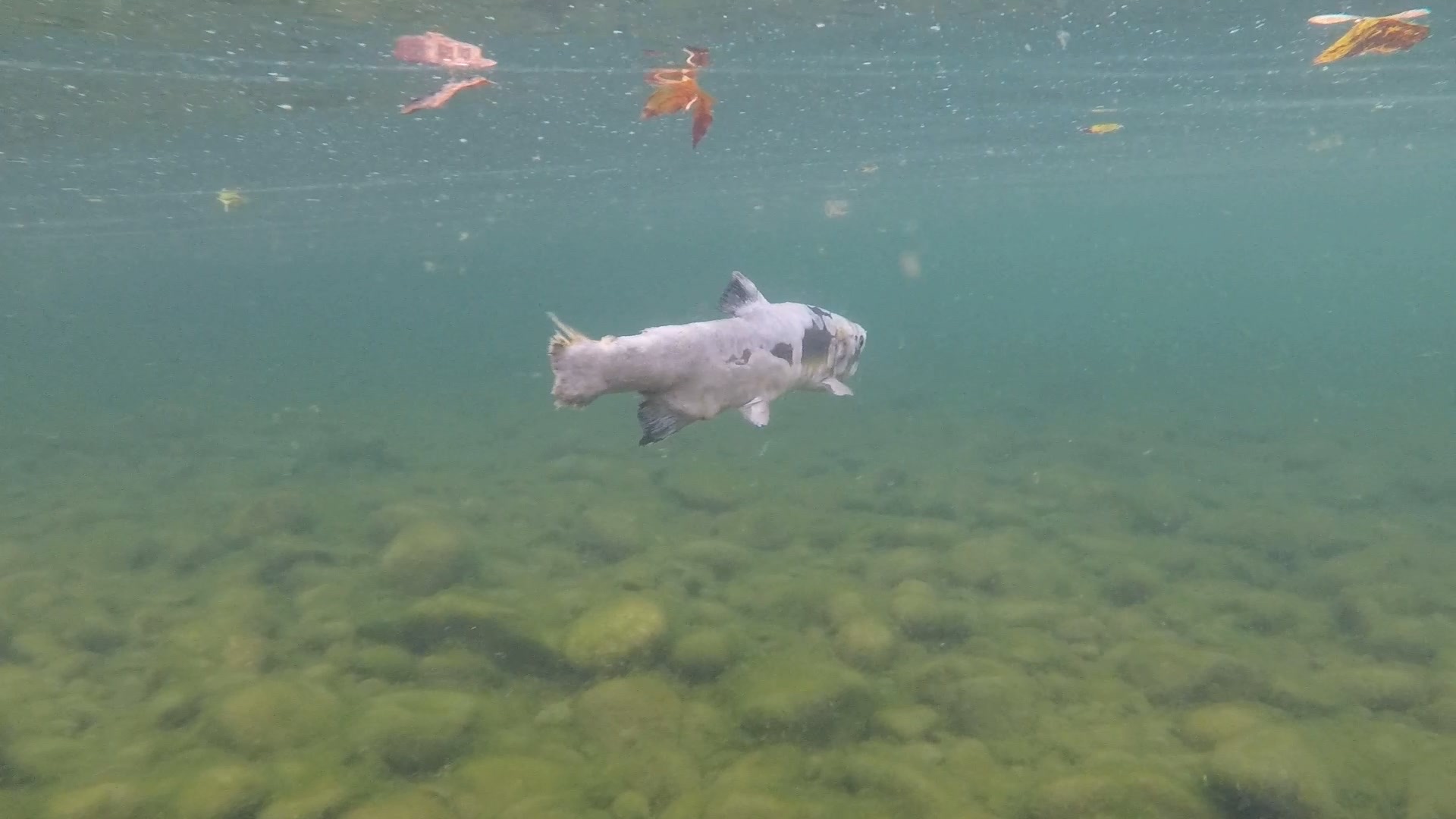 A pink salmon swims in the Nanaimo River in early October. Photo submitted by Katie Schulze

It’s the time of year when salmon are returning to freshwater to spawn, but across the Island, fish are holding out in the ocean, waiting for the seasonal rise in creek levels to take hold and allow them to complete their life cycle.

On average, Victoria sees about 88 millimetres of rain in October; so far there has been none with no precipitation in the forecast for the next week. In fact, it’s been weeks since the Island had any sizable amount of rain at all. Greater Victoria alone has only had 2mm since July 8, and water levels are falling across the region.

“[The drought] is affecting the smaller creeks more than the larger rivers,” said Nicolette Watson, a Fisheries and Oceans Canada salmon scientist. “The larger rivers, especially ones that have reservoirs on them or lake-fed systems, have a little bit more water and a little bit better migration conditions right now.”

Pink salmon, which typically return to the Strait of Georgia in smaller numbers in even years, have largely finished their run already. Chinooks, which use bigger river systems, are right in the middle of their run.

So far, the numbers of Chinook seem to be matching expectations, though many are still holding out in the ocean waiting for river levels to rise, while others may still be meeting tricky shallow areas upstream.

Last week, the City of Nanaimo released water from two reservoirs on the Nanaimo River to increase water levels. This is something that the city, the Nanaimo Fish Hatchery, two water licencees, and the Department of Fisheries and Oceans do annually to flush fresh, cool water down the river to encourage Chinook salmon to move upstream and start spawning.

While the reservoir levels allow for this, increasing flow levels isn’t possible everywhere.

The amount of water being released into the Cowichan River, for example, was lowered slightly last week after water levels in the lake began to fall too low. Watson said she has been looking into whether this change in flow is affecting fish in the river.

Partway up Colquitz Creek, near Tillicum Mall, is a fish fence and trap designed to help volunteers count the fish that make their way up the creek in the fall.

The fence directs fish into a trap to be counted and identified, then the fish are released back into the creek to continue their journey upstream to Beaver Lake—if they aren’t first eaten by the otters that are skilled at breaking into the trap.

Last week, Watson was at Colquitz Creek, setting up a camera system to film the fish that will come up in a matter of weeks. It will also serve to thwart the otters.

This year, with the motion-sensor camera installed, the fish can just be filmed and counted that way, instead of being trapped and made easy prey. But water levels need to rise first.

“[The camera’s] not going to be able to really run until there’s more water in there,” Watson said. “There’s just a couple of inches in the trap box where the camera’s going to be, and it needs to be up to more like six, eight inches of water in there for the fish to move through and be able to get on the video camera.”

In recent years, the number of coho salmon that have returned to the creek to spawn has declined. The Friends of the Colquitz Mainstem and the District of Saanich have worked to restore fish habitat in the creek in 2019 and 2020, but there’s not much they can do about a lack of precipitation.

Coho and chum salmon, which are currently at the beginning of their run, could be at the biggest risk if it doesn’t rain soon. The two species rely on smaller creeks and streams to spawn—freshwater sources that have been most depleted by the lack of rain and warm weather.

“Smaller creeks around the Island that are not lake fed, a lot of them are really really low. Some of them are actually drying up,” Watson said. “Most of those creeks are chum and coho creeks. So, if we get rain soon, then those fish will be OK, but they’re kind of holding in estuaries and getting picked off by seals.”

Coho, in particular, need to make it up farther in the river to spawn, necessitating higher water levels to help them get far enough.

Chum, on the other hand, stay lower in the river and spawn as soon as they can find suitable gravel. Even with less distance to travel, chum returns are expected to be below average this year, due to low rates of survival at sea over the past five years. Watson says juvenile chum salmon, which head out to the ocean far earlier in their life cycle than their coho and Chinook counterparts, are especially sensitive to warm water. The “Blob”—or warmer sea surface temperatures—has harmed the species’ survival in the ocean over the past half a decade.

For the salmon that have already spawned, their eggs should be safe, as long as they don’t dry out, Watson said. Eggs need to be kept wet, and require dissolved oxygen in the water.

They also can’t survive water temperatures that are above about 15C. With the unseasonably warm temperatures and low flows, creeks could get too warm.

On the Central Coast, where thousands of pink and chum salmon were found dead in an extremely low creek bed, some of the creeks were warmer than 20C.

“If the rivers do get really low over the next coming weeks,” Watson said, “then we would be pretty worried about those eggs drying up.”

The Jordan River was once brimming with salmon, until three industries changed it forever