November 29, 2022
Get the news and events in Victoria, in your inbox every morning.
Thank you! Your submission has been received!
Oops! Something went wrong while submitting the form. 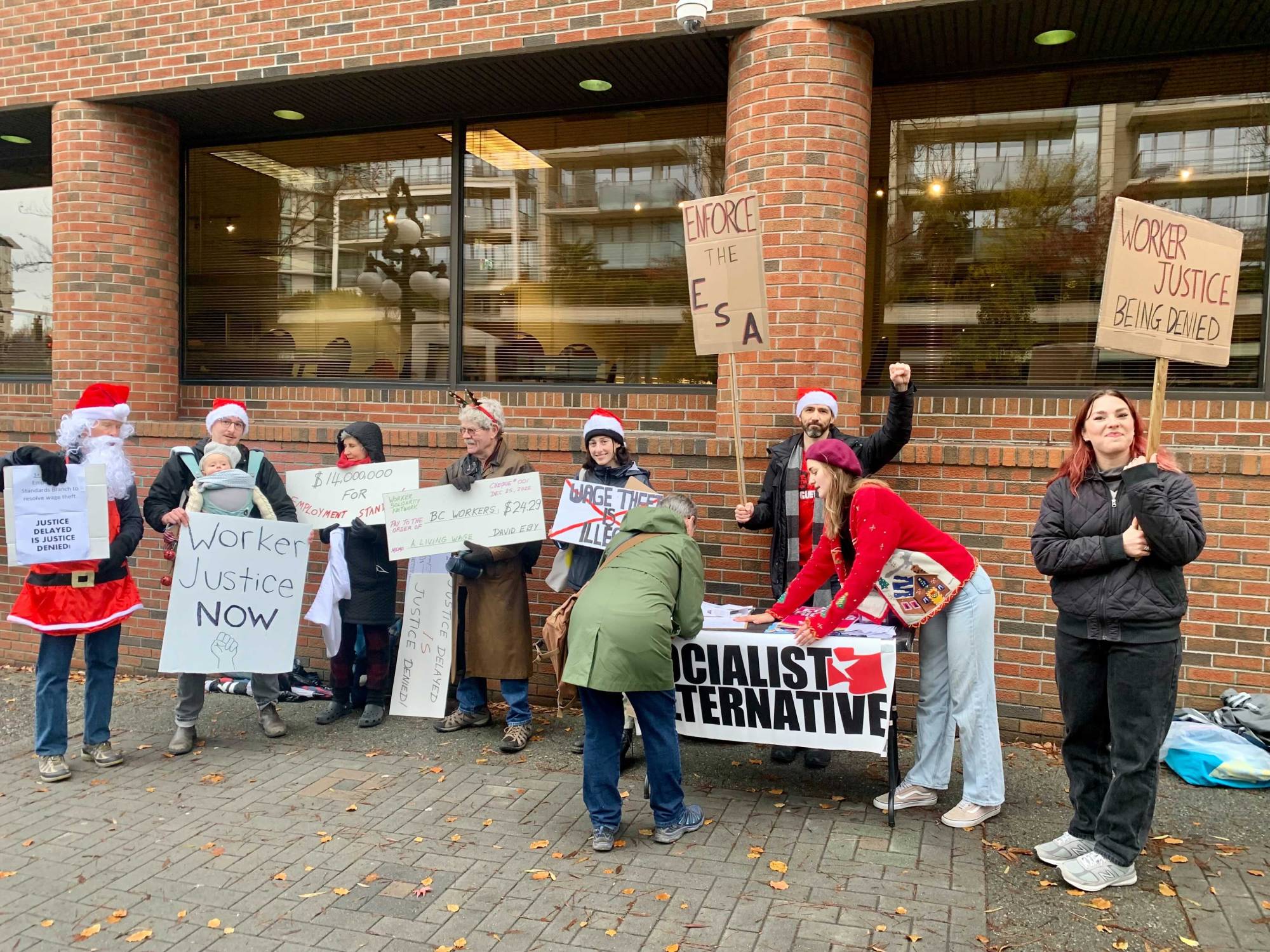 On Black Friday, Santa Claus was out on the streets of Victoria with special gifts for passersby: fake cheques.

Santa, along with advocates from the Worker Solidarity Network (WSN), spent Friday outside of the BC Employment Standards Branch calling attention to the lack of funding allocated to the branch by the provincial government ahead of the 2023 budget.

“Workers are facing issues like wage theft or are being misclassified as independent contractors at a time when low-wage workers are hit the hardest,” said Pamela Charron, WSN’s interim executive director.

The BC Employment Standards Branch sets the standards for payment, compensation, and working conditions in most workplaces, while making sure that employers adhere to those standards. If a worker has a complaint about how their employer is treating them, they can file a formal complaint with the branch.

But even those rights aren’t always respected; the WSN says the slow process at the Employment Standards Branch is standing in the way of wronged workers getting the wages or support they’re legally entitled to.

The BC Employment Standards Coalition’s report highlights the failures of enforcing the BC Employment Standards Act. It details months-long—in some cases years-long—delays in the resolution of complaints, a failure to proactively investigate employers and industries with a history of Act violations, and a general lack of funding and resources to effectively enforce the Act.

“The issue has been going on for a long time, though obviously it was exacerbated during the pandemic when there were a lot of workers that were laid off,” Charron said. “A lot of workers were filing complaints with the Employment Standards Branch when they were losing wages during the pandemic. This created a crisis at the branch that created [even longer] waits for workers to recover their wages.”

Charron says with the current affordability crisis, she has heard from workers—in particular low-wage workers—who are losing their housing because they have not received paycheques or who have been fired without due cause. Retrieving lost wages through the branch just takes too long.

While workers do have an option to go to small claims court over employment standards complaints, Charron says the Employment Standards Branch remains the avenue most accessible to low-wage workers.

In August, the province’s Select Standing Committee on Finance and Government Services acknowledged some of the issues the branch is facing and the need for an increased budget for the branch. Committee members agreed that wait times at the branch are unacceptable, and particularly impact marginalized people.

Accompanying the action in front of the government office was a petition from the WSN, calling on the province to increase the Employment Standards Branch’s budget by at least $14 million to increase capacity, staffing, and training. The training would ensure more fairness and consistency around decisions. The WSN is also asking for higher penalties for employers who violate the Act.

“We constantly see repeat offenders of employers that are continuously breaking the law,” Charron said. “There isn’t a large penalty when employers break the law and when they break it, it puts workers in a very precarious position.”