November 2, 2022
Get the news and events in Victoria, in your inbox every morning.
Thank you! Your submission has been received!
Oops! Something went wrong while submitting the form. 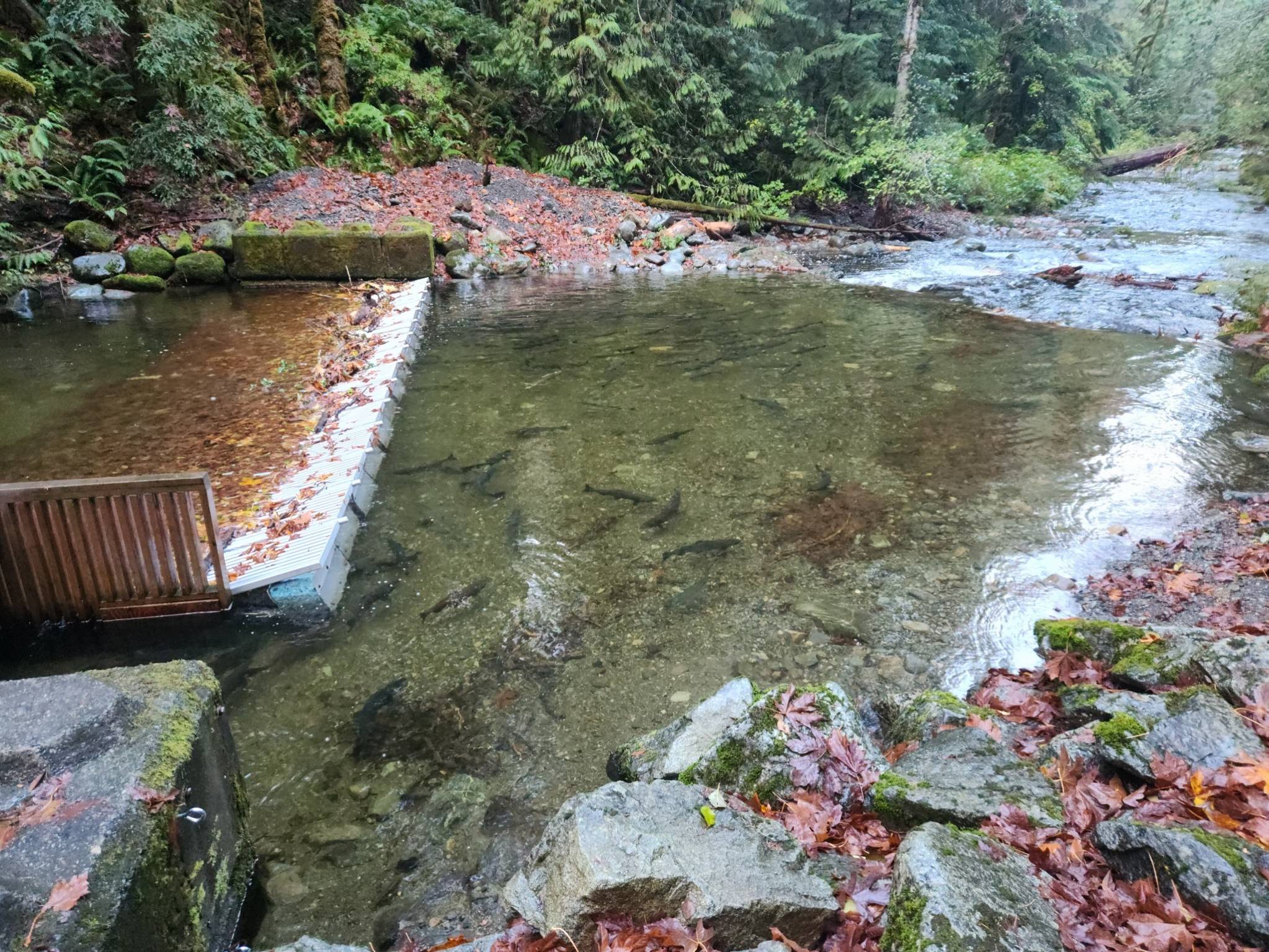 Two weeks ago, Joscilyn Jupp looked out at Goldstream River with trepidation.

Mid October, when salmon start their annual migration upstream to spawn, is usually like Christmas for the Goldstream Hatchery director, volunteer, and streamwalker. But after months without rain, she felt more stressed than excited.

The water was too low, the temperature too warm, the number of fish too small. And they were trapped at the bottom of the river, in the estuary where the Goldstream River empties into Finlayson Arm.

“We could see seals and the activity of the wildlife saying that there are fish here, but not coming up the river,” she said.

During streamwalks, hatchery volunteers only counted 200 fish in the river; normal numbers for that time of year would be more like 1-2,000.

But then, finally, the rain started falling. And the salmon, at last, started making their way upstream. In the past week and a half, the number of chum salmon in the river has ballooned to 3,000.

“Once they had the freshet from the rainfall, they engaged into the river quite eagerly,” Jupp said. “And what we’re seeing now is quite surprising. It’s a bit too soon to know for sure, but it’s looking like it’s going to be a larger run than what we would normally see.”

Last November, the salmon spawn in the provincial park was hindered by severe, untimely flooding that washed away gravel beds, disturbed eggs, and knocked logs into the river.

Jupp says it’s possible that many salmon did not enter the river to spawn last year because of the poor conditions. Once a fish enters freshwater they become committed to spawning and their body begins to shut down. Members of the salmonid family, including salmon and trout, commonly spawn at three years old, but can also wait another year or two, so if the fish sense that river conditions aren’t right, they can instead return another year.

“This year, we’re seeing bigger chum, which indicates these are four or five-year-old fish rather than the average three year old,” Jupp said. “We’re wondering if they held off last year knowing that the river conditions wouldn’t have been ideal during the flood.”

Even with the recent rains, Goldstream River conditions are still lower than normal. The river level has only risen by about three inches, which tells Jupp that a lot of the recent rain is being soaked up into the parched ground.

The Capital Regional District is currently helping river levels by releasing pulses of water from the Goldstream Lakes reservoir for 10 days. This release couldn’t be initiated until the rains hit the forecast to ensure that the reservoir has enough water for human uses, and to make sure fish don't get stranded in standing water if river levels were to fall again.

There is also still evidence of last year’s flood in the river that salmon are having to navigate around.

A significant log jam in the lower river reach is proving to be a bit of a challenge for fish to get past. The fish have been mostly successful in swimming underneath the dense mass of logs—“but the bear in the area is quite happy and is using those logs and fallen trees to walk on and catch his breakfast and lunch and dinner,” Jupp said.

Jupp says the hatchery works with First Nations in the area to restore the river if necessary for fish survival. In the past, they have had to modify beaver dams so that the fish could successfully come up the river.

“It’s always a fight against Mother Nature, but in the end, the fish find a way,” Jupp said.

Across the Island, salmon runs are a bit behind schedule due to the dry fall. According to the latest data from the Department of Fisheries and Oceans, chum have been holding in estuaries all around the South Island in the hopes of rain. As such, the timing of the runs has been pushed back.

There has been a five-year decline in chum salmon productivity, which the DFO predicts will result in a below-average return this year.

Nicolette Watson, a fisheries scientist with the DFO, told Capital Daily last month that there has been a low rate of survival at sea because juvenile chum salmon, which head out to the ocean far earlier in their life cycle than their coho and Chinook counterparts, are especially sensitive to warming ocean water.

Chinook salmon are completing spawning in most rivers and early indications are showing an average to good return. This contrasts the summer Chinook runs which were below average on the South Island.