Police photo of a ball python following its safe recovery after more than one month at large in Victoria. The animal died of suspected starvation or exposure soon after escaping again following return to its owner.
Wildlife 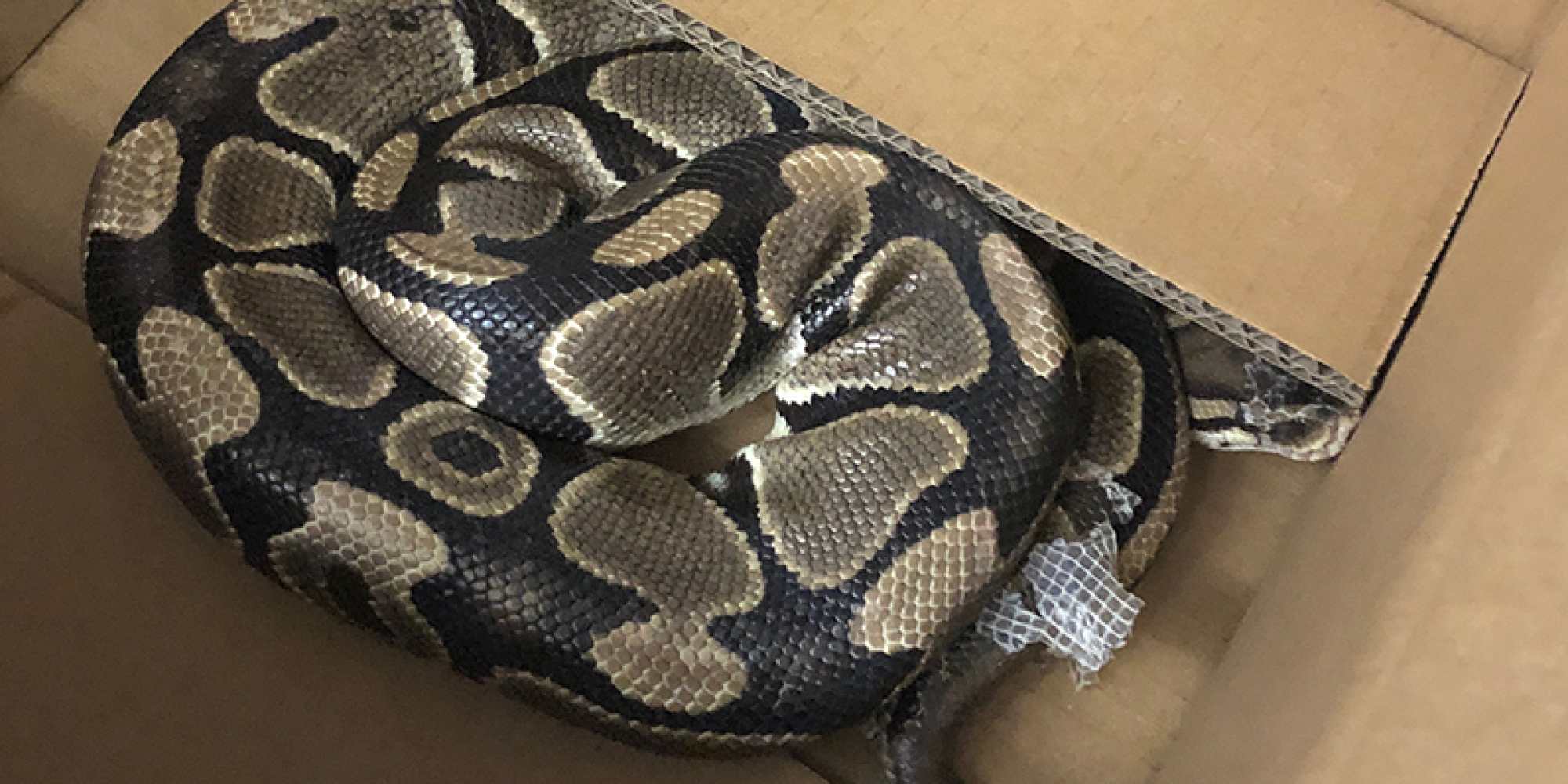 Police photo of a ball python following its safe recovery after more than one month at large in Victoria. The animal died of suspected starvation or exposure soon after escaping again following return to its owner.

A ball python on the loose doesn’t faze Animal Control Services officer Ian Fraser. So when one escaped from its owner’s backpack this summer, Fraser considered it a “non-event.” Unless you’re a rodent, the non-venomous constrictors are essentially harmless — and in Greater Victoria, it’s not actually that unusual for people to lose their pet snakes or to move into an apartment and find one that has been left behind. “It happens every year,” Fraser says.

The four-foot-five-inch ball python was found under a parked vehicle on August 12, more than a month after its escape, and returned to its owner. But after it slithered out of the backpack a second time, a week later in Saanich, it wasn’t so lucky. It turned up dead in a nearby driveway. It had no visible injuries, leading Saanich Police to suspect that it had died from either starvation or exposure.

News of the snake’s second escape and subsequent death was met with swift and fierce commentary on local social media, with accusations of animal cruelty, calls for the owner to be fined, and outrage over the thought of the snake being returned to someone who’d carried it around in a backpack.

Under the Wildlife Act, BC regulates more than a thousand exotic animals known as Controlled Alien Species that pose a threat to health and safety. There are 10 kinds of pythons on the list, but the ball python is not one of them. Marketed as starter pets, they’re the “single most traded live animal legally exported from Africa,” according to a recent report by World Animal Protection, an international animal welfare organization. Canadians keep about 28,000 of them as household pets, the report found, making Canada one of the world’s major importers of the species.

Victoria’s animal responsibility bylaw requires pet reptiles to be “securely confined in a cage or other container” when they’re in a public place. Violating the bylaw could result in a $125 fine. But the city didn’t issue a ticket to the ball python’s owner. “Our focus at the time was notifying the public to be aware of any potential risk,” Bowen Osoko, Victoria Police Department spokesperson, said in an email to Capital Daily.

Saanich Police looked into the possibility of an animal cruelty charge but ultimately found no grounds for it. “We have done follow-up and spoken to him, and we are satisfied that there was no intent to harm the animal and so no charges are being laid,” says Constable Markus Anastasiades, the department’s public information and communications officer.

That nobody is being held accountable for the animal’s death irks Jordan Reichert, the West Coast director of the Animal Alliance of Canada. “A real question we need to ask as a community is who, if anyone, should be able to care for exotic species? And do we need higher standards of accountability for those who have animals in their care to provide for the health and well-being of the animal and the safety of the public?”

Police will say little about the owner, other than that he has no fixed address. When he reported his pet snake missing for the second time, he said he’d been sleeping outside, in the Marigold neighbourhood, and had realized the snake was gone when he woke up.

While it might seem difficult for people without homes to care for pets, Grant McKenzie, communications director for Our Place Society, says that homeless people tend to take better care of their pets than people realize. “They often forgo their own food to make sure their pets are fed,” he says. “A pet is unconditional love, which when you’re living on the street, you don’t get a lot of. It can be very good for mental health.”

Our Place offers free vet clinics for homeless pet owners once a month, and they’re usually well attended. The volunteer veterinarians and veterinary assistants typically see “upward of 100 animals” — mostly dogs, cats, and ferrets — in the span of a few hours, McKenzie says.

To Reichert, the ball python’s death underscores the need for stronger animal protection legislation, regardless of the snake owner’s intentions. Exotic species shouldn’t be considered property and forced to live in an unnatural habitat, he says — but if they are no one should be surprised when they escape captivity.

It’s not only snakes that break free. In 2015, a cheetah imported from South Africa was seen wandering a highway in the Kootenays before it disappeared, causing a nearby school to go on lockdown. And last summer a monkey was spotted on the loose in Campbell River and never found.

“This is an ongoing issue,” Reichert says. “It takes place all over BC.”