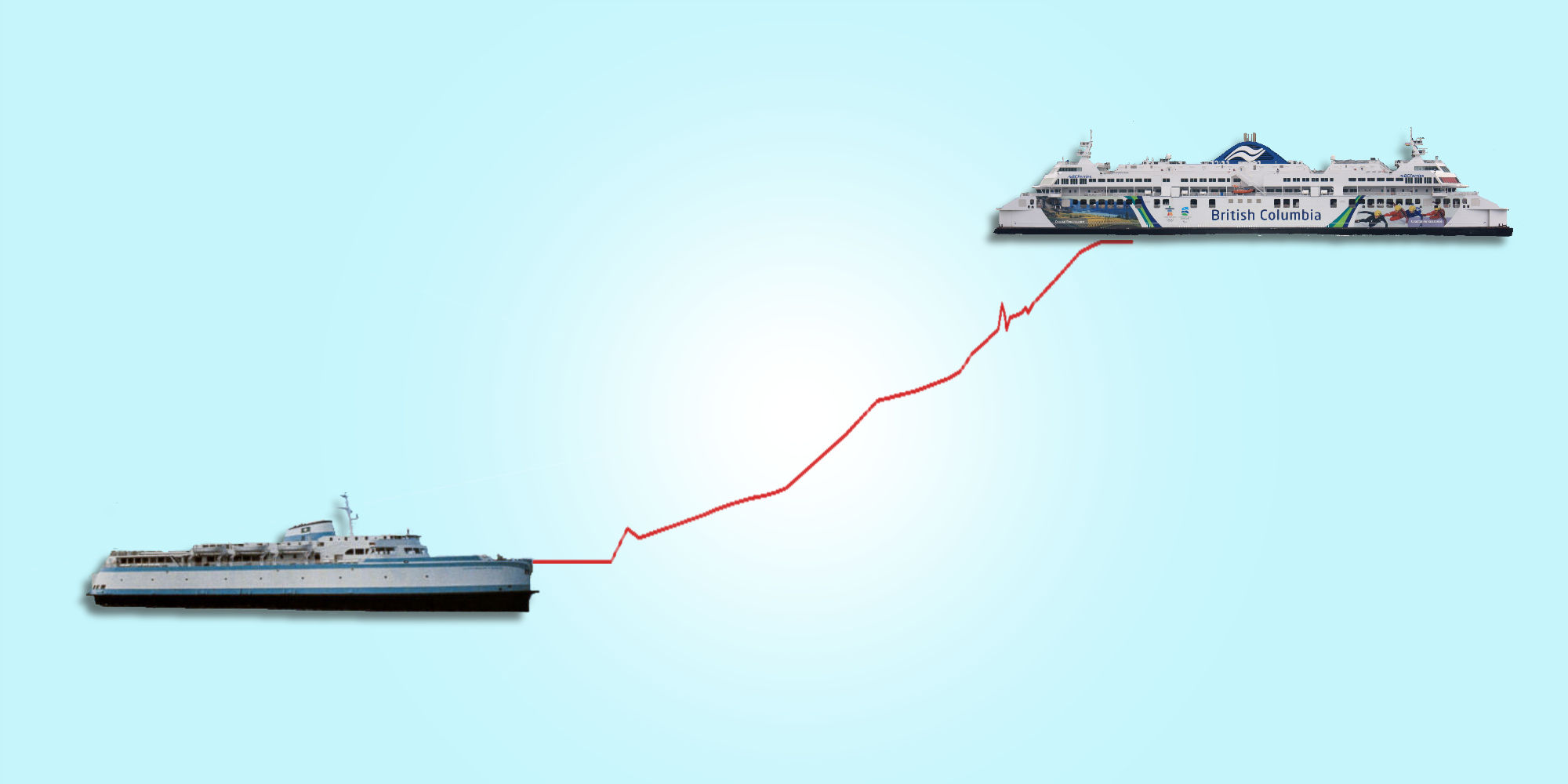 This week, B.C. Ferries was given the go-ahead to raise fares by up to 2.3% per year until 2024. If fully implemented, this would mean that taking a car and driver to Tsawwassen could soon cost more than $80 before tax.

British Columbians are already paying the highest fares ever charged for the Swartz Bay to Tsawwassen route since B.C. Ferries was commissioned in 1960. Back then, travelling to and from the mainland only cost $2 for a walk-on passenger and $5 for a standard-sized vehicle.

Incredibly, this price on the main routes would remain unchanged for 16 straight years until, in 1976, ferry fares began climbing at an average rate of $1.50 per year for a car and driver.

B.C. Ferries fares to Tsawwassen, not adjusted for inflation

Chart shows, in absolute terms, the B.C. Ferries fare to take a car and driver or a single adult passenger to Tsawwassen from Swartz Bay at peak season. Where applicable, all prices include fuel surcharges and rebates.

Of course, the average Canadian of 1960 only earned an income of $1,672 per year and a dozen eggs cost 55 cents. Even in 1987, the year the loonie was introduced, the $1 coin had roughly double the purchasing power that it does now.

So, to get a more accurate grasp of exactly how much current-day British Columbians are paying for ferry service, The Capital dug up virtually every fare across B.C. Ferries’ 59-year history and adjusted them for inflation.

Cost to take a car to Vancouver, adjusted for inflation

Chart tracks the one-way B.C. Ferries fare to take a car and driver from Swartz Bay to Tsawwassen at peak season. Prices include fuel surcharges and rebates.

The results show we are still paying ferry fares that are at historic highs, but not as dramatically as it might seem. Right now, it costs $74.70, before tax, for a car and driver to take the ferry from Swartz Bay to Tsawwassen. That’s only $13 higher than the relative price of a ferry trip in 1960; back then $7 for a car and driver was worth the 2019 equivalent of $61.78.

However, the current fares are nearly double what they have been at points during the 1970s and 1980s. The absolute cheapest time to take a ferry to the mainland was in 1975. Fares were still $7 for a car and driver, but after 15 years of inflation that $7 was now the equivalent of only $32.46 in 2019 dollars.

Despite an attempt to double fares in 1976, political pressure soon pushed them back down, and Vancouver Islanders spent much of the 1980s able to take themselves and their car to the mainland for the modern-day equivalent of only $40.

The relative cost would climb again in the 1990s, although a brief experiment with off-peak pricing would deliver some respite to commuters. In 1995, while it would cost the equivalent of $52.26 to take a car and driver to Tsawwassen on a summer weekend, the price dropped down to $41.73 if that same commuter chose to travel on a Tuesday in February.

What really drove fares into overdrive, however, was the corporation’s semi-privatization in 2002. According to our analysis, taking a car and driver to Tsawwassen has risen the equivalent of $14 since B.C. Ferries was shifted away from being a Crown Corporation.

Fare for an adult passenger, adjusted for inflation

Chart tracks the one-way B.C. Ferries fare for a single adult passenger from Swartz Bay to Tsawwassen at peak season. Where applicable, prices include fuel surcharges and rebates.

But while drivers are getting hosed, prices have remained remarkably stable for walk-on passengers. In fact, even at the current per-passenger rate of $17.20, boarding a ferry to the mainland as a walk-on is slightly less expensive than when it cost $2 in 1960. Adjusting for inflation, foot passengers in B.C. Ferries’ first year paid the 2019 equivalent of $17.65.

The Capital Daily newsletter is a summary of all the news and events happening in Victoria, in your inbox every morning.
Subscribe Today
contact@capnews.ca
Related Coverage
No items found.
Have a tip?
Use our confidential inbox