North Vancouver Island hospitals close overnight indefinitely
Good news
News
Based on facts either observed and verified firsthand by the reporter, or reported and verified from knowledgeable sources.

August 20, 2021
Get the news and events in Victoria, in your inbox every morning.
Thank you! Your submission has been received!
Oops! Something went wrong while submitting the form. 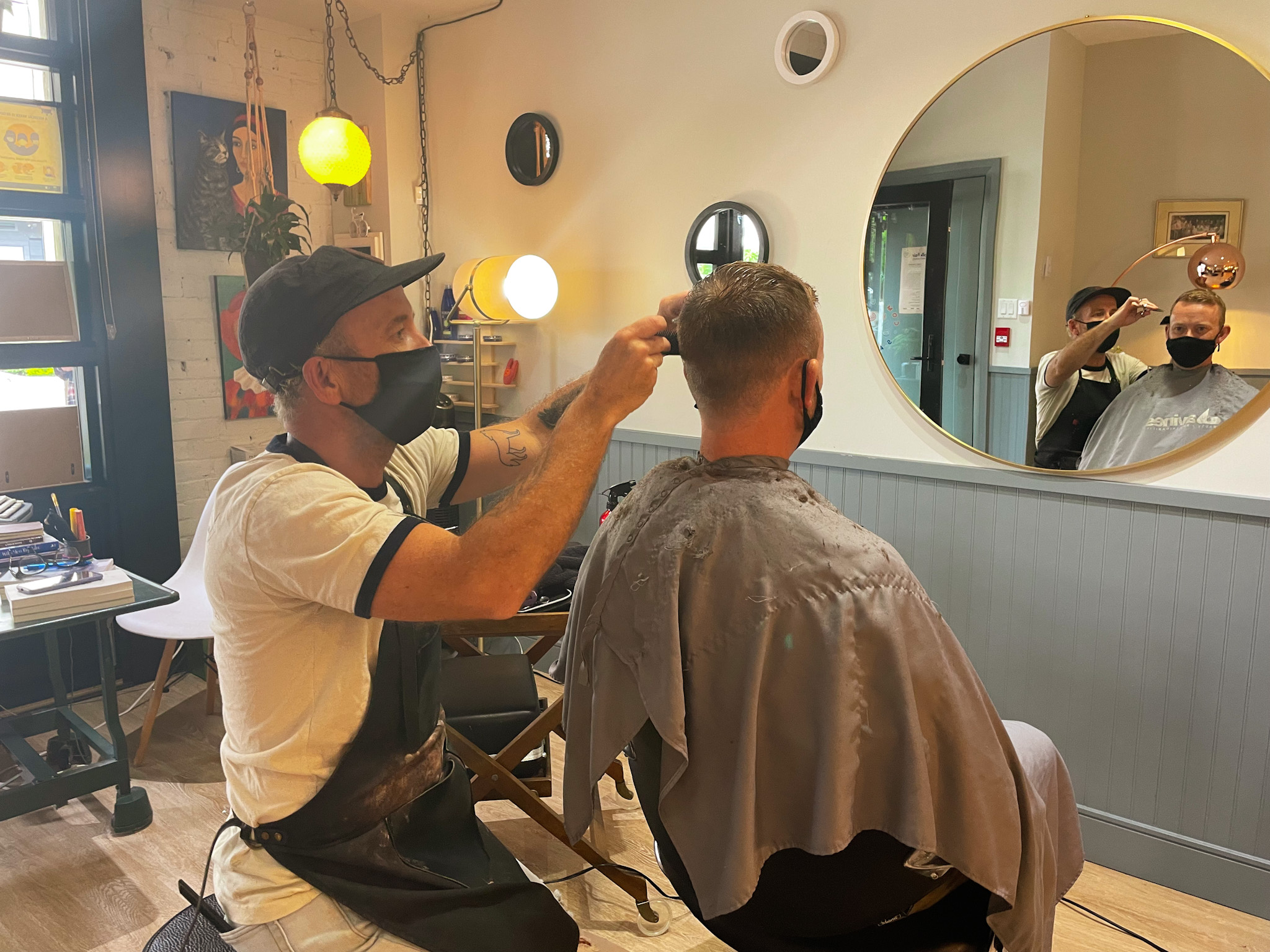 As the final strands of hair are brushed to the floor, Jamie McCallum takes in his client’s new look.

About one out of every five of the clients McCallum trims at Community Salon are part of a new program he’s created: the “hair bank.” Although their appointments don’t appear any different from the rest, anyone in the community can get a professional haircut through the salon entirely for free, thanks to the generosity of other customers’ donations and McCallum offering up his time.

“People have been really generous,” he said. “The bank has been empty before, but I will never turn anybody away.”

For a long time, McCallum has refused to accept tips, instead encouraging happy customers to put their money towards haircuts for those unable to afford them. For every donation to the hair bank, he donates an equivalent amount of his time.

Since opening Community Salon in May, McCallum has made it his mission to create an inclusive, accessible space through gender neutral pricing for haircuts and the hair bank. That was the reason, he says, behind naming it the “Community” salon in the first place—he really wants it to be a space for everyone in the community.

In a city where the average men’s haircut that isn’t just buzzed down starts at about $30, and women often are charged $60 or more for their cuts, customers are finding Community Salon a welcome change of pace.

“A lot of the time when there is a free [haircut] service, it's just like trim and not really personalized,” said Chantale, a community member who got her hair cut for free by McCallum this week. “But I thought this was great, I really liked it.”

After spending an hour in the chair, Chantale pulled the gray cape from her neck. She surveyed herself in the salon’s many circular mirrors, feeling the new, fresh ends with her fingertips. It felt lighter, she told me later—freeing.

Chantale will be looking for a new job soon, and is thankful to McCallum for helping her feel confident in creating a good first impression.

“The whole haircut bank, I think that's a genius idea,” said Chantale. “I think there's a lot of people that could benefit from this.”

McCallum previously worked at salons that offered free haircuts on certain days—like free haircuts to moms on Mother’s Day—and has long wanted to extend this goodwill to every day of the year. He has always offered up his services for those who couldn’t afford them, but when COVID-19 hit, it made him realize it was time to officially start a place where anyone in need of a haircut could get one.

Now, the hair bank is open to anyone who wants to access it, no questions asked. McCallum knows the significance these cuts carry for people—some, he said, have been brought to tears.

“I want to treat everyone the same,” he said of both clients that pay or book through the hair bank. “People have the choice to book hour-long haircuts, a 45-minute haircut, or a 25-minute haircut.”

At first, the hair bank policy was just advertised by word of mouth and on the sandwich board that stands on the street outside of the salon. But recently, more people have been drawn in through glowing reviews of the hair bank in local Facebook groups.

McCallum has partnered with Cool Aid to cut hair for people who access their services, and also unofficially cuts hair for many people from other nonprofits and charity groups around the city. He hopes that his program will help destigmatize low-income and unhoused people in Victoria, who can face barriers due to a lack of access to services many people take for granted, like haircuts.

He offers classes for those looking to learn how to cut hair on all levels, from beginners to pros. Ultimately, it’s his goal to bring on someone who is struggling in Victoria as an apprentice at his salon, and set them up with a network of people he knows—social workers, dentists, and other local professionals willing to lend their time—who can support and uplift them.

To paying patrons of Community Salon, the hair bank program is one aspect of the store’s charm that draws them in. Since word has gotten around about the hair bank, there’s been no shortage of people looking to contribute to its success.

“Everybody needs haircuts, and nobody should be excluded just because they can’t pay for one,” said Tracy McEwan, who got her first Community Salon haircut this week. “If that’s been preventing somebody from getting a job interview or something, that’s going to level the playing field.”

Those looking to support the hair bank can donate with their haircut or e-transfer a donation to Community Salon through their email, info@communitysalons.ca.

When it comes to sustainability, McCallum isn’t really concerned that the hair bank will impact the salon’s stability long term. Although he was offering free haircuts in spite of an empty hair bank when the salon first opened, community support has kept the hair bank going strong over the past few months.

“I don't see a stopping with me,” he said. “I would love to see every salon have a pay it forward program.”

How the grassroots Community Laundry Program is making a difference with free, fresh loads