Aaron Watson waits by his truck on a snowy December morning in Victoria. Photo submitted.

AI and machine learning tools raise concerns over academic integrity in Victoria's educational systems
Good news
News
Based on facts either observed and verified firsthand by the reporter, or reported and verified from knowledgeable sources.

December 23, 2022
Get the news and events in Victoria, in your inbox every morning.
Thank you! Your submission has been received!
Oops! Something went wrong while submitting the form. 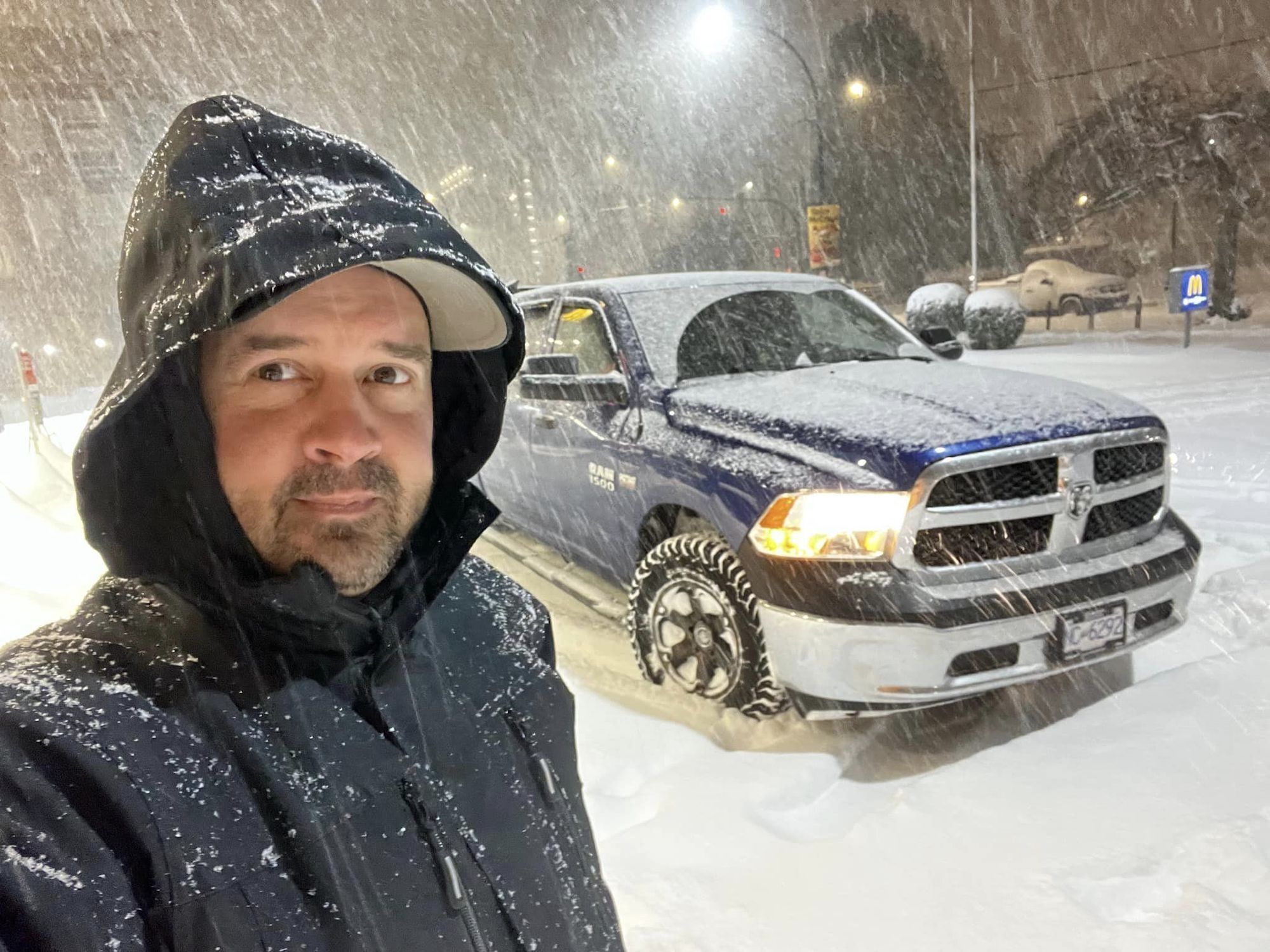 Aaron Watson waits by his truck on a snowy December morning in Victoria. Photo submitted.

As more than a foot of snow blanketed Greater Victoria this week, many people across the region prepared themselves to stay home and wait out the storm. But others, like the more than 100 drivers that volunteer with the Vancouver Island Toyota 4x4 & Island Health Staff Transportation Facebook group, readied themselves to spring into action.

Founded in 2019, the group connects winter-ready volunteer drivers with healthcare workers in need of transportation. As of Dec. 20, the group lists 87 drivers on the south Island from Victoria to Duncan, 22 in Nanaimo and Parksville, 21 on mid-Island from the Comox Valley up to Campbell River, and 3 on the north Island, in Port McNeill and Port Hardy. At the time of publication, the group had just over 6,600 members, many of them healthcare workers looking for a safe way to get to work in the storm.

Christine Westland is one of those healthcare workers. She works as a nurse at the Acacia Ty Mawr nursing home in Shawnigan Lake. This was her first year using the service, though many others at her facility have used it in the past. Westland, 62, said she would normally drive to work, but since her husband passed away in August, the idea of being stuck in bad weather with no one to call for help makes her nervous.

“If I get stuck up here, I have no one to back me up. And also, it's really slippery, as it often is up here,” Westland said. “If there’s black ice, and I went in a ditch, I wouldn't make it to work.”

As a nurse, she said there’s a professional responsibility to get to her job, no matter what the weather is. Otherwise, it puts pressure on a system that’s already struggling with a worker shortage.

“When you only have one nurse on, if you don’t make it to work, then the night shift has to stay and do a double,” Westland said. “This [group] makes it so no one should be calling in, saying they can’t get in because of the snow.”

Jilly Laviolette is one of the group’s coordinators, and lives in Port Hardy. This recent round of winter weather has kept her busy—Laviolette said the group has seen just over 1,200 new member requests since the snowfall began. On Tuesday she spent six hours doing volunteer administrative work including driver orientations, ride verification (to ensure that those requesting rides actually work in healthcare), and showing new members and drivers how to book rides.

Laviolette said she volunteers for the satisfaction of giving back to her community, and knowing that essential workers can travel safely.

“If we can help those healthcare workers get to work safely, it takes pressure off of an already strapped system, and allows them to be able to give a better quality of care,” she said.

Laviolette said they ask would-be drivers about their vehicles and winter driving experience, and check to see if they are involved in any 4x4 clubs across Vancouver Island. She said a lot of the drivers are former Search and Rescue members, RCMP officers, or former members of the BC Ambulance Service. Laviolette and the other volunteer administrators remind the drivers that this is a free service, though it’s up to them whether they want to accept voluntary offers of gas money or gift cards.

Aaron Watson has been driving with the group for the past several years, and usually works as a professional driver for Wilson’s Transportation. When he happened to have a couple days off during the snowstorm, he said he decided to use that time to help out. On Tuesday Dec. 20, he started his day at 4:30am, and kept driving until 3pm.

“I put a post out in the group. And within minutes, I had a whole list of people requesting rides. So I kept on going all day long,” Watson said. “The roads were really deep yesterday. There were a lot of people all over the roads.”

As of Wednesday, he estimates he’s provided about 25 rides helping people get to and from work, covering an area from downtown Victoria all the way up to Sidney. So far he’s given rides to nurses, healthcare aides, a doctor, food service workers, and care home workers.

Formerly from Ontario, Watson said he misses snowy weather, and loves the excuse to drive in the snow. Though he doesn’t ask for any compensation, he said that many people offer a bit of gas money and that he’s also been given cookies, chocolate, and hugs.

“The majority of people are very grateful, they're happy to get to work. I applaud them too,” Watson said. “They were troopers, and they all wanted to get to the hospital to do their jobs. I commend that.”

In the past, the group has been recognized by Toyota Canada for their service. Laviolette said that despite the bad reputation that 4x4 drivers can have, the community she’s part of is people largely dedicated to making their community a better place, whether they’re driving essential workers through storms, or organizing beach cleanups in remote parts of the Island.

“All of us are so passionate about either giving back or helping out, like helping make the planet a better place,” Laviolette said. “It’s uplifting to see people come together and work together for no rhyme or reason or pay, just out of the kindness of their hearts.”

With more snow in the forecast, BC Transit braces for possible delays