Victorians make their way through the foot of snow that fell on the region on Tuesday. Photo: Nina Grossman / Capital Daily

Capital Daily is part of the Trust Project
latestCOVID
TransportationBusiness
HousingGood News
Victorians make their way through the foot of snow that fell on the region on Tuesday. Photo: Nina Grossman / Capital Daily

AI and machine learning tools raise concerns over academic integrity in Victoria's educational systems
Snow
News
Based on facts either observed and verified firsthand by the reporter, or reported and verified from knowledgeable sources. 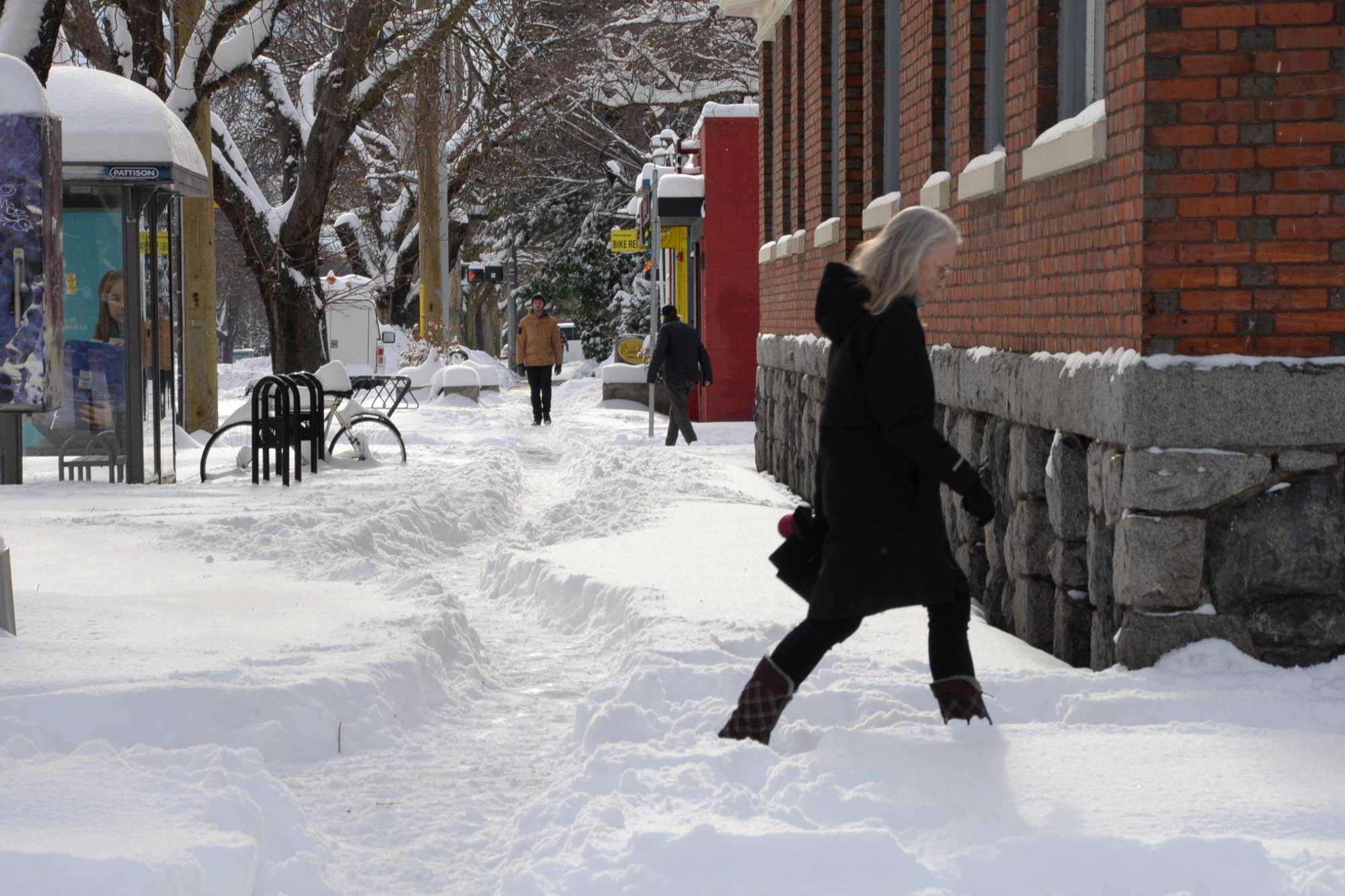 Victorians make their way through the foot of snow that fell on the region on Tuesday. Photo: Nina Grossman / Capital Daily

Victoria woke up to a thick blanket of snow Tuesday morning, with up to an estimated 35 cm of fresh powder bringing roads, services, and schools to a halt across the region.

Environment Canada cancelled its winter storm alert before noon, but the blizzard still wreaked havoc on regional transportation, with BC Ferries sailings between Swartz Bay and Tsawwassen delayed, and sailings between Brentwood Bay and Mill bay cancelled entirely. The ferry corporation said full service is expected to resume Wednesday.

Meanwhile, BC Transit suspended its local bus network at 6:30am, offering HANDYdart services for essential medical appointments only. Drivers were equipped with shovels and would be attempting to get as close to driveways as possible, BC Transit said in a Tweet.

BC Transit dispatched a bus for a handful of routes at 1pm in an attempt to gradually resume service, but pulled its buses off the road again after evaluating road conditions. The bus service anticipated the delays, telling Capital Daily earlier this week that icy conditions can prevent even their snow-tire equipped buses from hitting the road.

“This is not a decision that we take lightly as we know our customers rely on us to get to their destinations,” said Tessa Humphries, BC Transit communications manager. BC Transit indicated on its website that the next service update will be provided at 6am Wednesday.

For Victoria and Saanich, road-clearing is on a priority route basis.

“Our plows have been going 24/7,” said City of Victoria spokesperson Colleen Mycroft. “The focus is on our priority routes, emergency routes, and the main arterial roads.”

Mycroft noted that sidewalks are the responsibility of residents and businesses.

“We’re encouraging folks to get out and clear their sidewalks and help their neighbours,” she said late Tuesday morning. “At this point our crews are really focused on getting our roads cleared.”

The snowfall even left a District of Saanich plow in need of rescue. It was pulled from a ditch near Saanich’s No. 2 Fire Hall early Tuesday morning and quickly resumed operations, said Kelsie MacLeod, District communications manager.

“Similar to other municipalities in the region, the large amount of snow has created challenges,“ MacLeod said. “All staff are safe and unharmed, and we are continuing our efforts to create safe routes for transportation.”

“Having access to pedestrian paths actually becomes more important on days like today,” he said. “I know from lots of people I’ve spoken to with mobility issues that when there’s any snow, if the sidewalks don’t get cleared, they’re basically stuck in their house.

“And it's one of those things that actually creates a bigger challenge than it would otherwise because you're not going to get food delivery and things like that,” he added.

Guerrero speculated that because heavy snowfall is so rare in Victoria, property owners might not prioritize clearing their sidewalks, even though City bylaws mandate snow and ice removal by 10am each day.

“If you don't get out there and sort of keep on it early and often, then it does pack in,” he said.

“I know the city is very busy, obviously, clearing roads and digging out things that they have to dig out to make sure that they're providing services they have to,” he said. “But it’s one of those things where, if they thought about it in advance, I think that it could…make the city a little bit safer.”

For people without shelter, a winter storm goes beyond inconvenience.

Ottosen has been collecting donations of tents, sleeping bags, blankets and warm clothes in preparation for winter. She said community volunteers are helping to distribute the items and she’ll be holding a pop-up donation drive near the Pandora Avenue Save-On Foods Wednesday from noon-4pm.

“It’s a humanitarian crisis,” she said. “We’ve only got a very small number of people who need help in this community, and we can do it. We just need to do it.”

Service providers of all kinds mobilized to support vulnerable populations this week, with 80 additional shelter spaces available through the Extreme Weather Response (EWR) program and another 30 spots open through the City of Victoria’s warming centre, which remained at St. John the Divine Church on Tuesday so people wouldn’t have to go out in the cold that morning.

The EWR shelters have been at capacity since Monday, save for three unused spots at the Rock Bay Landing shelter, said Sylvia Ceacero, executive director of the Greater Victoria Coalition to End Homelessness.

“And all of them will be full tonight,” she said on Tuesday afternoon.

The Salvation Army is one of three shelters opening additional spots for the EWR, beyond the 170 clients it already serves. But the shelter far exceeded its 30-mat capacity Monday night, said Jeff Baergen, executive director of Salvation Army Victoria.

“On nights like these it’s pretty hard to turn people away,” he said. “We have been—wherever possible—referring people to other shelters.”

The most recent Point in Time count estimated there were 270 people unsheltered in the city. But that was 2020, and Ottosen speculated that the population has more than doubled.

“We are ill-prepared,” she said. “The people on the [900-block of Pandora Avenue] and the people on Princess are really struggling right now.”

The storm caused roughly 3,200 Greater Victoria customers to lose power, but as of Tuesday afternoon, about one third of those outages had been resolved.

“The big damage was in the western communities,” said BC Hydro spokesperson Ted Olynyk. “A tree came down, took a number of stands—a line—out.” Over 1,600 BC Hydro customers in Sooke lost power as a result.

There were also 3,000 to 4,000 outages reported on the Gulf Islands. BC Hydro will be sending an overnight crew to Saturna Island, Olynkyk said.

The extreme cold that came with the storm led to a record-use in electricity in the province on Monday evening, with more than 10,800 megawatts used between 5 and 6pm, said BC Hydro in a press release. The previous record was set last year, when consumption reached 10,762 megawatts during the cold snap on Dec. 27, 2021.

BC Hydro expects demand to remain high, and isn’t ruling out the possibility of the record being broken again before the end of the cold snap.

But even businesses that still had power decided to keep the lights off for the day.

Mainstay Victoria attractions such as Butchart Gardens, the Royal BC Museum and Miniature World called the day off, as did the region’s post-secondary institutions. Camosun College and Royal Roads University announced complete school closures, with the latter reporting a 30cm accumulation of snow on campus in the morning.

At UVic, the cafeteria stayed open with reduced hours and services for on-campus residents. At least 12 in-person exams were cancelled and rescheduled for Dec. 22, at roughly equivalent times and locations.

Recycling pickup by the Capital Regional District was cancelled, with residents encouraged to wait for the next pickup or send their recycling to a nearby depot. Canada Post deliveries were suspended on the South Island up to Duncan, with deliveries delayed across the rest of Vancouver Island.

At the Victoria International Airport, there were 20 cancelled flights and 16 delayed flights Tuesday, with most of the delays resolved within two hours, said airport spokesperson Rod Hunchak.

“Runway conditions continue to improve now that the snow has stopped,” Hunchak said. “We have airfield maintenance crews continuing to be scheduled overnight to continue with the clean up.”

Hunchak added that the airport is expecting minimal disruption Wednesday, with only one cancelled flight so far and “just a couple of delays being anticipated.” 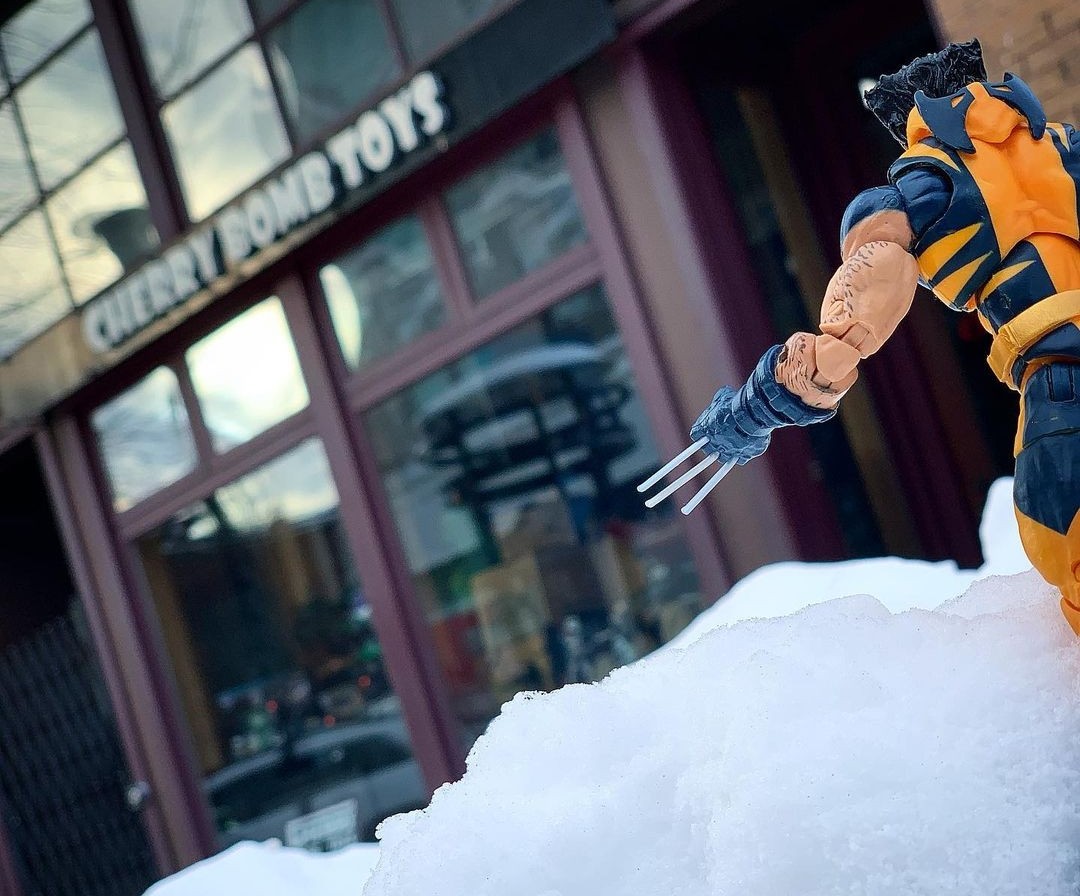 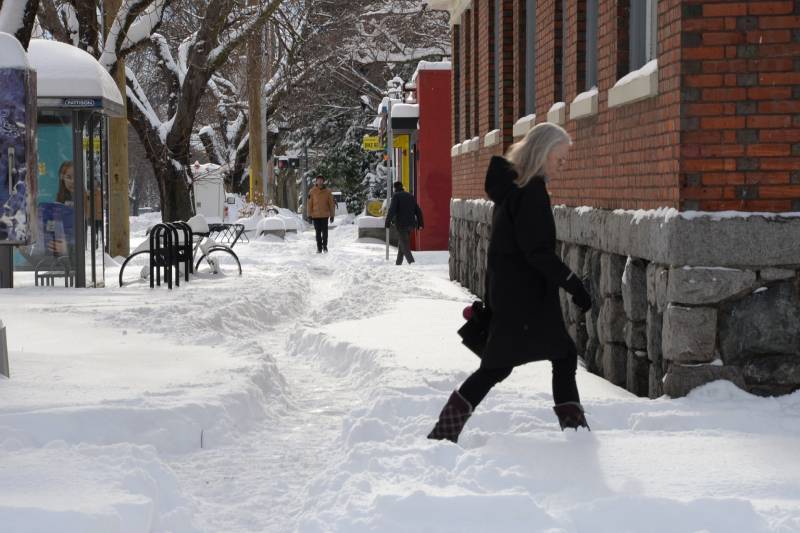 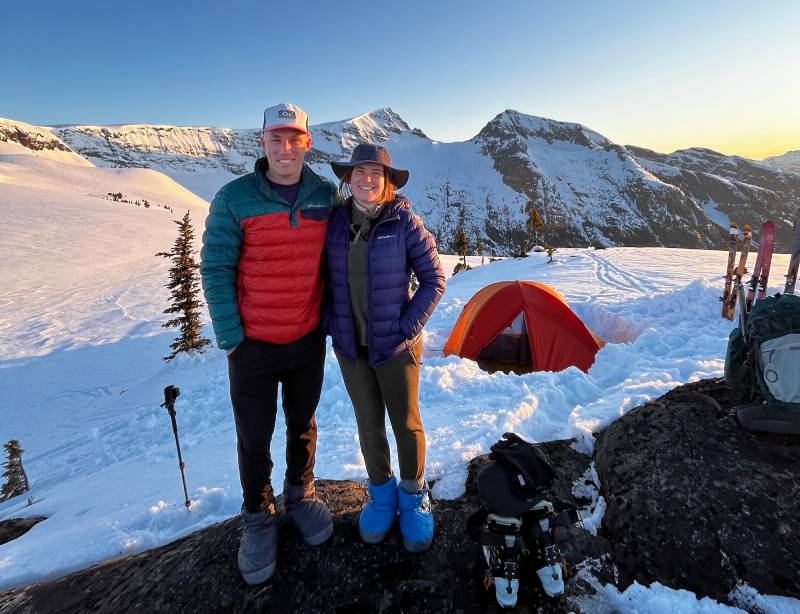